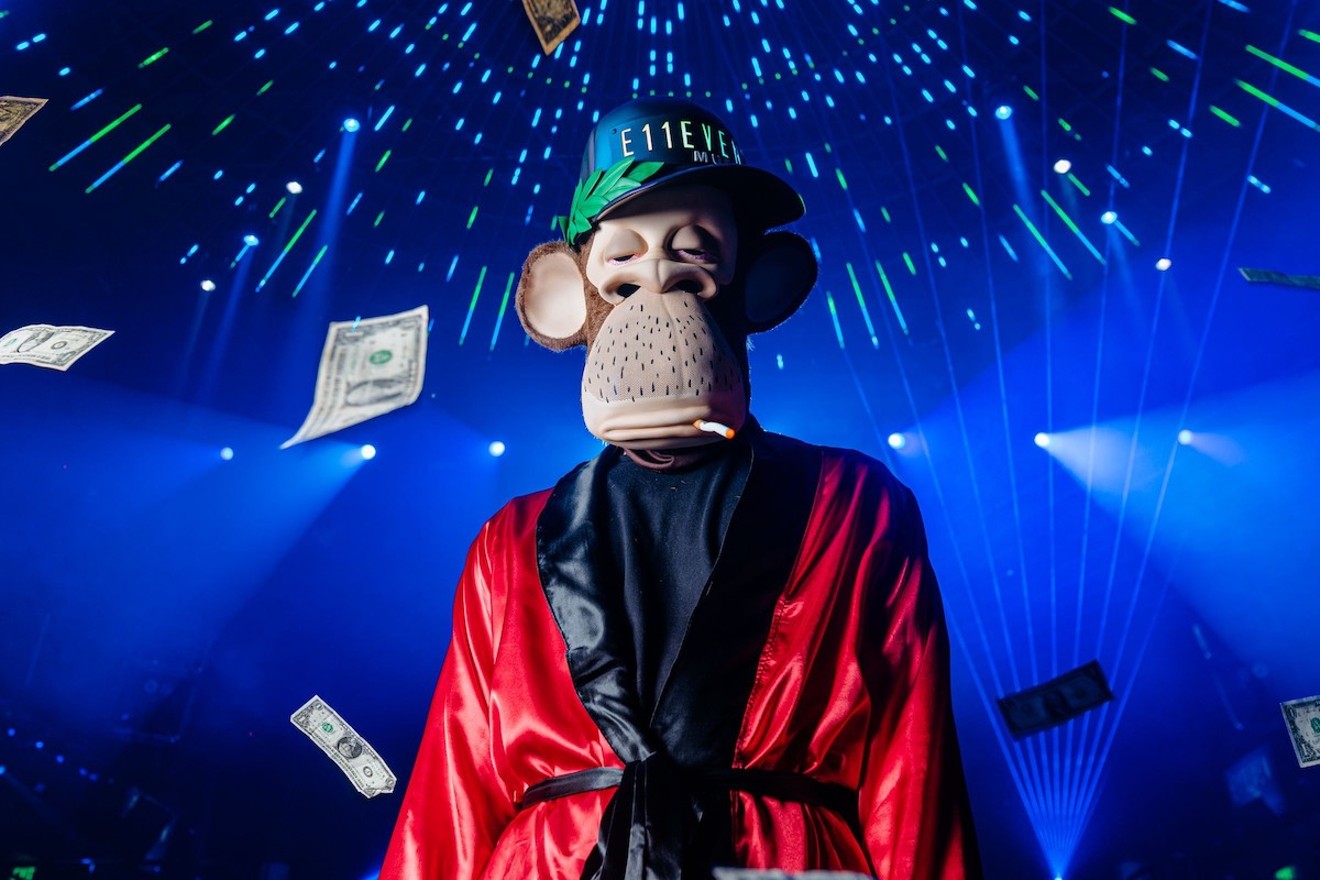 11Ape comes to life. Photo by Adinayev
Last month, the world was introduced to FN Meka, a supposed artificial intelligence rapper signed to Capitol Music Group. Developed by Brandon Le and Anthony Martini, the ersatz act seemed to signal the music industry's willingness to jump into the world of digital influencers, but the project quickly drew criticism. Activist group Industry Blackout pointed out that FN Meka only helped perpetuate Black stereotypes and objected to it spewing the N-word in its lyrics. Also, alleged songwriter Kyle the Hooligan, a Black rapper in Houston, stated he had yet to be paid for his contribution after being ghosted by Le.

FN Meka was dropped by Capitol two days after signing.

It's not like FN Meka is the industry's first virtual act — and it certainly won't be the last. Many point to Gorillaz as the world's first virtual band. Still, Damon Albarn and Jamie Hewlett haven't been able to translate their creations to the stage, as Albarn usually performs the songs live as himself with the help of a backing band and guest musicians.

Instead, one need only look at Japan's Vocaloid phenomenon. It's essentially software that allows anyone to synthesize a human voice to use with music. The most popular Vocaloid is undoubtedly Hatsune Miku, who enjoys a devout following in Japan and the West, with Miku appearing live in concerts in holographic form. In addition to music, she's adorned racing cars and starred in her own rhythm video games.

In 2014, the New York Times' Jeff Oloizia was already pondering, "Does Hatsune Miku's Ascent Mean the End of Music as We Know It?" Well, eight years later, the music industry is still chugging along.

With Miami still being so invested in crypto — crash be damned! —  it was only a matter of time before someone used the blockchain to create their own digital performer.

Since 2014, Miami's ultra club E11even, owned by 11USA Group, has spearheaded numerous brands diverting from its Eleventh Street homestead. The club's merchandise — like the iconic E11even snapback — has become a global fashion statement. It's bloomed a record label and vodka brand, and, oh yeah, E11even-branded condominiums already under construction along Northeast 11th Street.

“I moved to Miami to open the E11even concept with my partners, creator Dennis DeGori, Michael Simkins, and Marc Roberts, and we had a lot of successes,” says Gino LoPinto, operating partner of E11even and its latest concept, E11even Music, a record label and artist/producer management company. "We already had other verticals that we were discussing, from vodka to a music label. Crypto was interesting to us, and when NFTs came out, we wanted to eventually end up in the metaverse, whether it's a club or property or gaming."

The nonfungible token carrying on the clubbing duties is Meta-Primate #11 of the Bored Yacht Ape Club collection. Now dubbed 11Ape, it's the first artist signed to E11even Music.

"We weren't sure, but we knew we wanted to start with an NFT," LoPinto explains. "Our hats have become pretty successful, so we said let's base our NFT around our hats. We thought: Let's buy Bored Ape Yacht Club, and it made sense to buy number 11."
The idea was simple enough: Purchase the mundane, stubbled ape smoking a cigarette in a velvet bathrobe, grow it to life form, and knight it with E11even swag.

The merging of NFTs and music can only draw a dividing line. On one end are the proponents who see a beautiful blend of music, art, and technology being used as a conduit for a producer to showcase their music. On the other hand comes the opponents, believing this concept is a vapid charade — pushing only a margins-hungry scene.

LoPinto, who admires the great elusive electronic artists from Daft Punk to Deadmau5, sees success in anonymity. And showcasing an NFT, a new concept that escapes many people, adds another layer of mystery past merely placing a monkey mask on someone while spinning the decks.

"I brought the idea back to my partners, and we thought we could create a live character with 11Ape who could embody the soul and brand of E11even. They loved it," he says. "The story is that once we put the E11even hat on, 11Ape came to life. Sort of like a Frosty the Snowman, so to speak."

The virtual primate was never meant to hang in the ether. Instead, its drive is split between the metaverse and Earth as a DJ and steadfast producer.

"I met with [Pitbull's DJ] IAmChino, and we started collaborating on what would be a good start for 11Ape," LoPinto says. "He played me a portion of "Bad Girls," which wasn't done at the time, but I said, 'I love this. It's got the hook, and I think we should do something with it down the road.'"

Initially, LoPinto thought "Bad Girls" should be marketed as 11Ape's second or third track, but Mr. 305 Records president Robert Fernandez believed the vibe, combined with Vikina's vocal work, should be the debut single to bring 11Ape to life.

"I liked the vocal, and we took the track to fruition with the visualizer and the marketing support," LoPinto explains. "It came about not more than three weeks ago. We had a conversation about putting this out, and we shot the video."

Clocking in just two minutes and 15 seconds, "Bad Girls" attempts to capture the last few rays of summer into a bottle. Vikina sings on two verses and raps for the bridge as the song interpolates Donna Summer's 1979 hit of the same name. "There are moments that get to be free/And those nights that were made for you and me/On and on until the moon want to leave/I want to be with the girls like me/Yeah bad girls (bad girls)/They always talking about the bad girls (bad girls)."

11Ape premiered IRL last month at E11even, which begs the question: What does an NFT DJ do, exactly?

The best answer is to draw a distinction.

"It's tough to compare an NFT DJ with 11Ape," LoPinto says. "I do think the NFT DJ will gravitate and grow in the metaverse, but I think when he's on planet Earth, he's a live human being. He doesn't speak but has a loud voice and an opinion. He takes a stance and believes in something. Donald Duck and Mickey Mouse came to life, and people want to take pictures with them, even if they're static. I think there is a separation that breathes humanity."

11Ape is expected to play again at the club later this month. And whatever your thoughts are on virtual acts like 11Ape, it's obvious they are here to stay.
KEEP MIAMI NEW TIMES FREE... Since we started Miami New Times, it has been defined as the free, independent voice of Miami, and we'd like to keep it that way. With local media under siege, it's more important than ever for us to rally support behind funding our local journalism. You can help by participating in our "I Support" program, allowing us to keep offering readers access to our incisive coverage of local news, food and culture with no paywalls.
Make a one-time donation today for as little as $1.