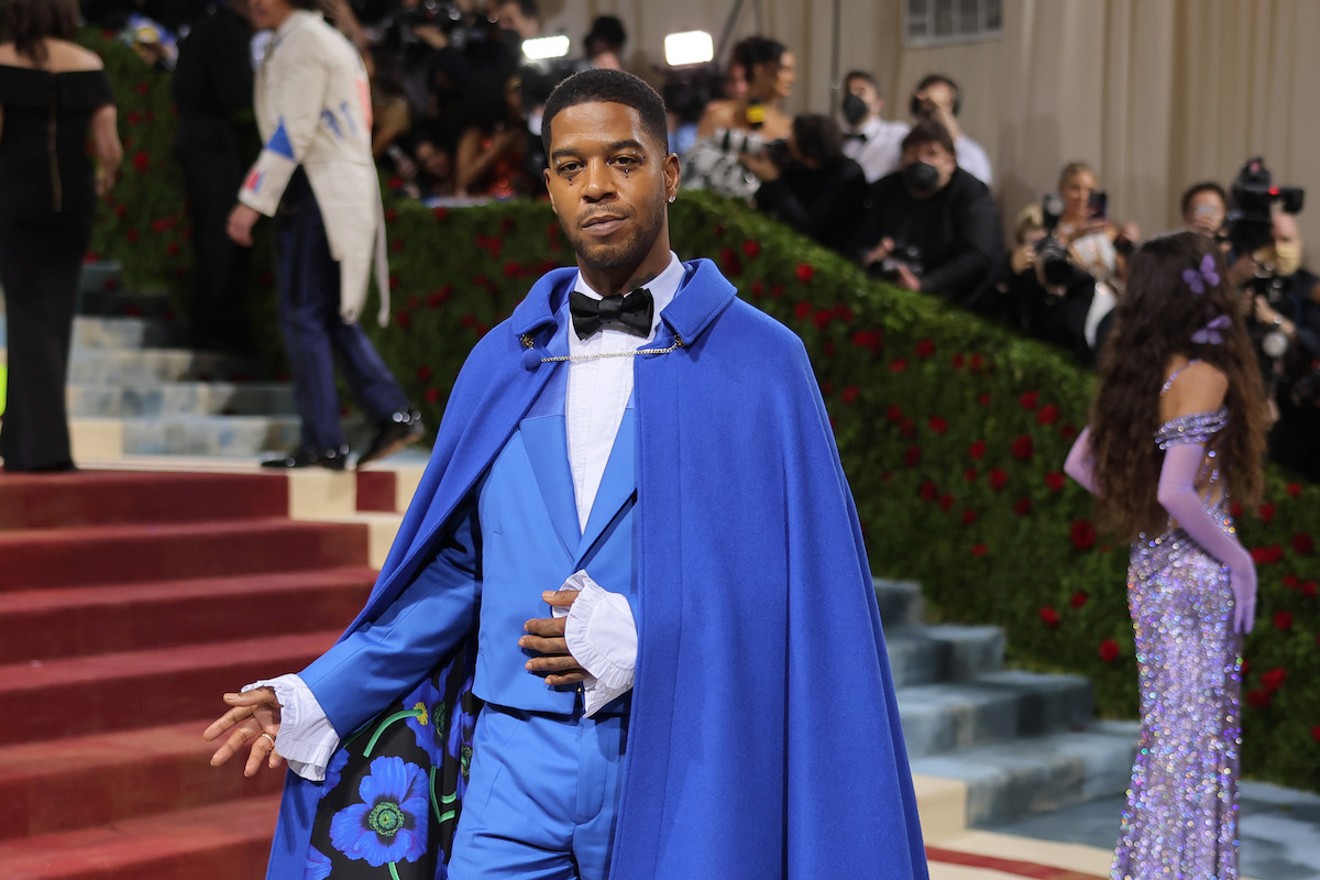 Kid Cudi on the red carpet of this year's Met Gala. Photo by Mike Coppola/Getty Images
Mr. Rager has been busy of late.

This past week, Kid Cudi unveiled the rollout for his upcoming album, Entergalactic, setting September 30 as the release date for the record and an accompanying animated Netflix series of the same name. The inaugural Moon Man's Landing music festival set for September 17 in his hometown of Cleveland was announced a couple of days later.

And for the first time in five years, he has announced a headlining tour. Sheesh.

Cudi's To the Moon World Tour kicks off in August, with a show in Miami slated for Sunday, September 4, at FTX Arena. Support from Don Toliver, 070 Shake, and Miami-Dade native Denzel Curry promises to amplify the potential for unbridled ambiance and intimacy. (Curry was set to headline his own show at the Fillmore Miami Beach on June 22 as part of his Melt My Eyez Tour; it was canceled owing to the venue's abrupt closure to make way for the construction of a hotel adjacent to the Miami Beach Convention Center.)

This will be Cudi's first appearance in South Florida since he headlined Rolling Loud Miami in 2019. Since then, the 38-year-old visionary has had a hand in several highly publicized bodies of work, including Kanye West's Donda, Playboi Carti's Whole Lotta Red, and Drake's Certified Lover Boy.

Most notably, the end of 2020 saw the surprise release of a new installment to the storied Man on the Moon series, Man on the Moon III: The Chosen. Fans warmly embraced the reworking of the cloudy neo-psychedelia Cudi has become known for, as he dipped into modern trap production.

Who said Kid Cudi fell off?

Here are the full dates of the To the Moon World Tour:
Kid Cudi. With Don Toliver, Denzel Curry, and 070 Shake. 7 p.m. Sunday, September 4, at FTX Arena, 601 Biscayne Blvd., Miami; 786-777-1000; ftxarena.com. Tickets cost $34.75 to $224.75 via ticketmaster.com.
KEEP MIAMI NEW TIMES FREE... Since we started Miami New Times, it has been defined as the free, independent voice of Miami, and we'd like to keep it that way. With local media under siege, it's more important than ever for us to rally support behind funding our local journalism. You can help by participating in our "I Support" program, allowing us to keep offering readers access to our incisive coverage of local news, food and culture with no paywalls.
Make a one-time donation today for as little as $1.
Olivier Lafontant is an intern for Miami New Times. He's pursuing a bachelor's in digital journalism at Florida International University. He specializes in music writing and photography and got his start as a writer for South Florida Media Network in 2021.
Contact: Olivier Lafontant
Follow:
Twitter: @oliviersaidhi
Instagram: @oliviersaidhi