Unafraid to Explore Different Sounds, Cosmic Gate Has Moved Beyond the Trance Label 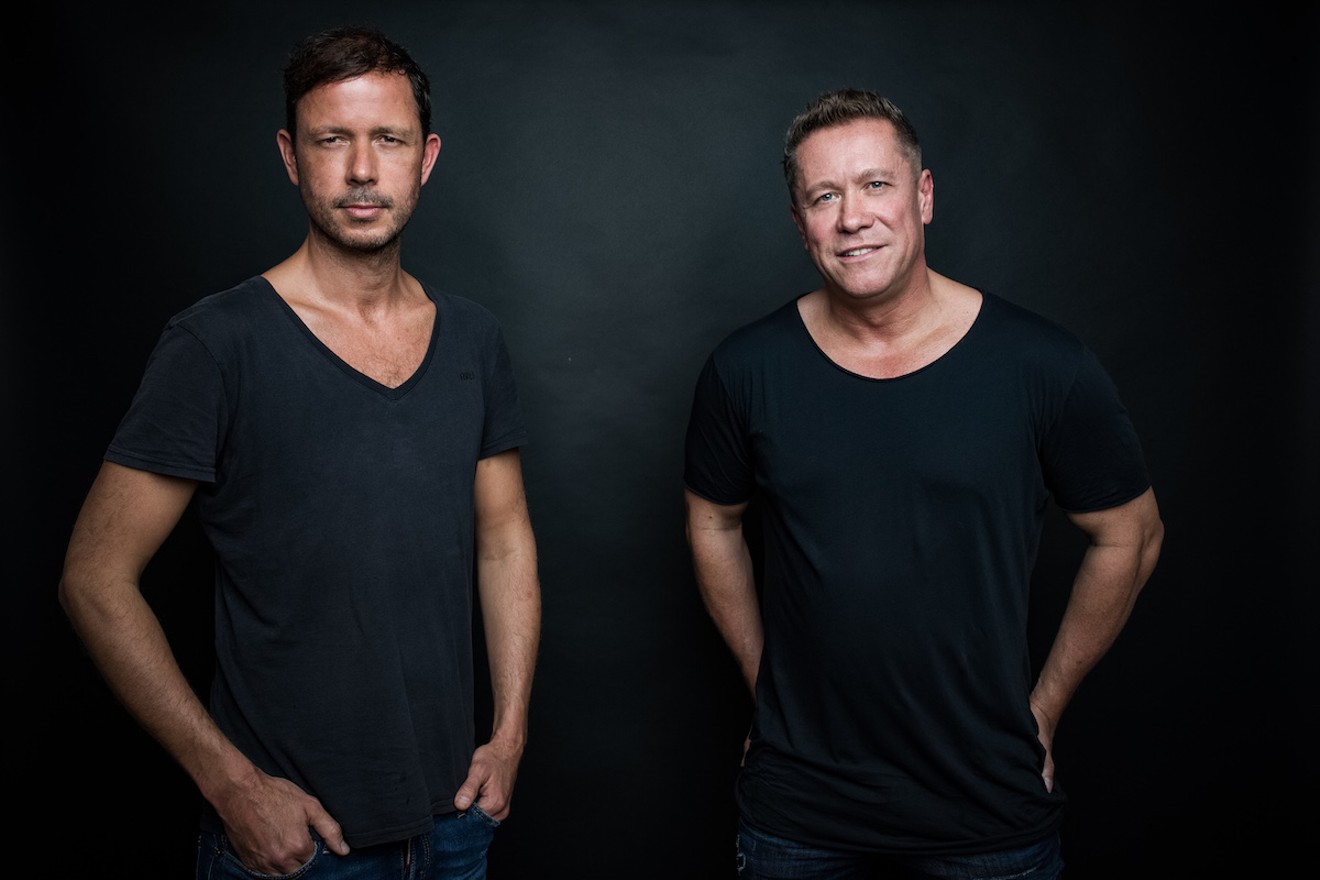 Nic Chagall (left) and Bossi of Cosmic Gate Photo courtesy of Cosmic Gate
The word trance brings to mind summer nights, runner’s high, pushing the speedometer past 100 mph, first kisses, and Cosmic Gate’s 2001 superhit “Exploration of Space.” Trance, the music genre, is techno’s saccharine and overly caffeinated sibling. It has a style associated with so many sweat-drenched afternoons at Ultra Music Festival.

Miami is no stranger to the genre, and legendary trance duo Cosmic Gate, consisting of Nic Chagall and Bossi, is no stranger to Miami. In fact, Bossi even lives here — though he's a bit critical of the Magic City's dance-music offerings.

“Let’s be honest: In Miami, there’s Space, and then there’s commercial EDM and Latin music clubs,” Bossi says. “It’s certainly a nice city to live for the view, but if you’re looking for a deep underground music scene, maybe you’re better off going to Brooklyn or Berlin.”

Despite the perceived shortcomings, Miami is clearly special to Cosmic Gate. Last year, the duo hosted two livestreams from a Miami Beach high-rise rooftop, making good use of the tropical skyline as a backdrop for their spacy brand of electronica. Then in March, Chagall and Bossi played a set at the Mondrian and used the captured footage of glistening Biscayne Bay for the music video for their newest single, "Blame."

“The weather and the light in Miami are just gorgeous,” Chagall says. “The livestreams we did in Miami were the only times we played together since the start of the pandemic. It felt really good to see each other.”

“Blame" is a slow-burning track with burbling synths and plenty of space in its mix. The song features sultry vocals and emotive lyrics from Amsterdam-based singer-songwriter Diana Miro and serves as the lead single from Cosmic Gate’s upcoming album, Mosaiik. The record will be put out in two chapters, the first of which is slated to be released in July on the duo's own label, Wake Your Mind.

“Each half of Mosaiik will be like an extended EP,” Chagall explains. “We play such a wide range of music, with so many parts coming together. In the end, it should come out to one big, beautiful picture.”

Bossi and Chagall started out in Germany, in the small town of Mönchengladbach, just outside Düsseldorf. But they've been living in separate cities ever since Bossi moved to the U.S. in 2009. Originally, he went to Las Vegas but relocated again to Miami shortly after. Then Chagall moved to New York City, where he’s been based ever since.
“When we were starting in Europe, people limited themselves,” Bossi says. “There was always the techno guy, the house guy, or the trance guy. But in the States, the sounds seemed to flow into each other. It was all less judgmental, more sympathetic — fresh.”

In their static periods, the guys send music back and forth online. Still, the duo returns to Europe often, and as professional club DJs, they never stay in one place for too long. They travel together so much that they have plenty of time to talk through material while in transit.

“For the first half of our career, in the 2000s, we both lived in Germany, on the same street even,” Chagall says. “So, it was easy to produce together. Now we send work back and forth. Maybe we don’t have the same in-this-moment reaction that we used to, but with all of our traveling, we do have a lot of time to sit with each other on planes, and we discuss music.”

The guys are amiable, if not joyful. They laugh and poke fun at each other. There’s a strong sense of kinship to their collaboration.

“We have different personalities — and that’s a fact, not a feeling,” Chagall says. “There’s nothing bad about that. It’s been 20 years now, and we know each other inside and out. A marriage gets harder, but our relationship gets easier.”

Bossi and Chagall embody the noun “trance” when they speak. The conversation is happy, euphoric, and though they are visually aging, as humans are wont to do, they look remarkably healthy for two people who spent the better part of the last 20 years hitting the club circuit hard.

Cosmic Gate’s early output, at least, is quintessential trance. You could easily find it next to Darude’s “Sandstorm” or Alice Deejay’s “Better Off Alone” on a Trance Classics Spotify playlist. Still, the guys have been producing for decades now, and when time passes, style inevitably changes. The music they’ve released during the latter half of their career is a far cry from the feverish dancefloor killers that made them famous in the first place.

“You can’t ask an artist to make the same music over and over again,” Bossi says. “After so many years, an artist is just a different person. It may be a compliment for someone to want to hear the same thing from an artist, but a copy will always be a copy and will never be as good as something original.”
KEEP MIAMI NEW TIMES FREE... Since we started Miami New Times, it has been defined as the free, independent voice of Miami, and we'd like to keep it that way. With local media under siege, it's more important than ever for us to rally support behind funding our local journalism. You can help by participating in our "I Support" program, allowing us to keep offering readers access to our incisive coverage of local news, food and culture with no paywalls.
Make a one-time donation today for as little as $1.