Deadmau5 Photo by Leah Sems
Miami Mayor Francis Suarez tweeted earlier this week, "I predict that this week will represent the single largest gross volume of sales of NFTs in history."

This week, large quantities of cash — both traditional and crypto — are being exchanged for art. You don't need a crystal ball to predict that in 2021 non-fungible tokens (NFTs) are going to play a significant role in that.

But what happens if you don't have thousands of dollars to drop on digital artwork?

That's where Canadian producer Deadmau5 and rock band Portugal. The Man come in. The artists have partnered to release a new single, "This Is Fine" (stylized as "this is fine."), on the blockchain. One million units of the single will be available for purchase for 0.25 NEAR tokens (approximately $2.19 at press time), making this an NFT most people can afford. "This Is Fine" will be released through the blockchain and cannot be heard through streaming services like Spotify or Apple Music.

The NFT will include cover art and collaborative artwork by Portugal. The Man's art director Wooden Cyclops and Smearballs, the artist behind the characters in Deadmau5's videos for "Monophobia," "Drama Free," and "Pomegranate." Each NFT will be numbered. There is also the promise of future metaverse integration and rewards for those who pony up now.

According to a press release, 500,000 units of "This Is Fine" will be available during Miami Art Week, though you don't have to be in Miami to buy it. 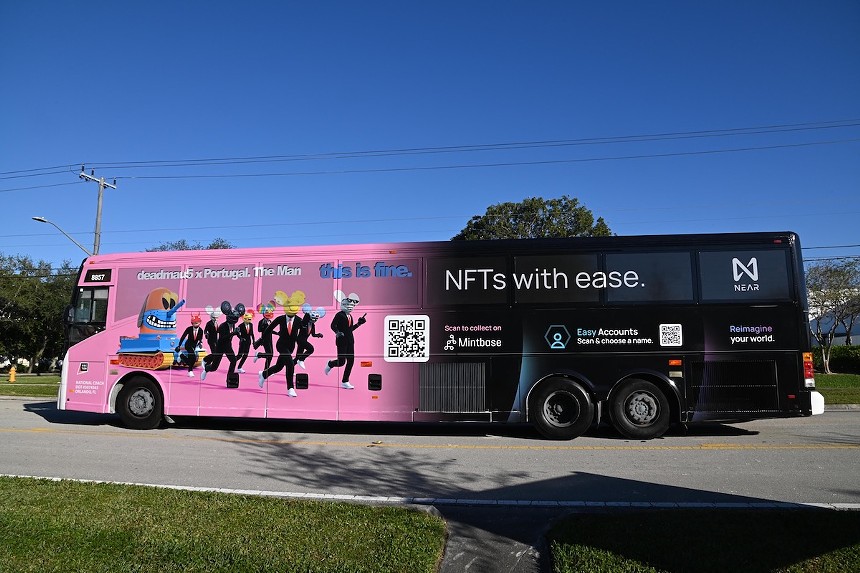 Be on the lookout for the busses wrapped with Deadmau5 and Portugal. The Man.
Photo by NEAR Foundation
The remaining 500,000 units will be sold as bundles with their own benefits and bonuses. Fans who purchase bundles of 50,000 units with bespoke artwork, guestlist to an upcoming Deadmau5 show, and merchandise, and bundles of 1,000 units come with their own generative artwork. The price for these bundles will also be 0.25 NEAR per unit.

Despite the technobabble, the sale of an NFT single mirrors the traditional way of selling music. In contrast to streaming services, where the user does not own the music, buying an NFT single is akin to going to a record store and purchasing a physical copy that is yours to own in perpetuity.

So why release it through the blockchain? Beyond jumping on the NFT hype, the million units of "This Is Fine" are meant to represent the amount needed for a single to be awarded a platinum record by the Recording Industry Association of America (RIAA). In its certification audit requirements, the RIAA counts digital downloads and streams — but not NFT sales. Deadmau5 and Portugal. The Man are hoping to change that rule.

If you're in Miami, be on the lookout for buses wrapped with ads promoting the Deadmau5 and Portugal. The Man collaboration. New Times is told the ads will feature a QR code users can scan to purchase the single. The single is also available to buy from Mintbase.
KEEP MIAMI NEW TIMES FREE... Since we started Miami New Times, it has been defined as the free, independent voice of Miami, and we'd like to keep it that way. With local media under siege, it's more important than ever for us to rally support behind funding our local journalism. You can help by participating in our "I Support" program, allowing us to keep offering readers access to our incisive coverage of local news, food and culture with no paywalls.
Make a one-time donation today for as little as $1.