Peaches Rocked and Shocked Miami at the Ground 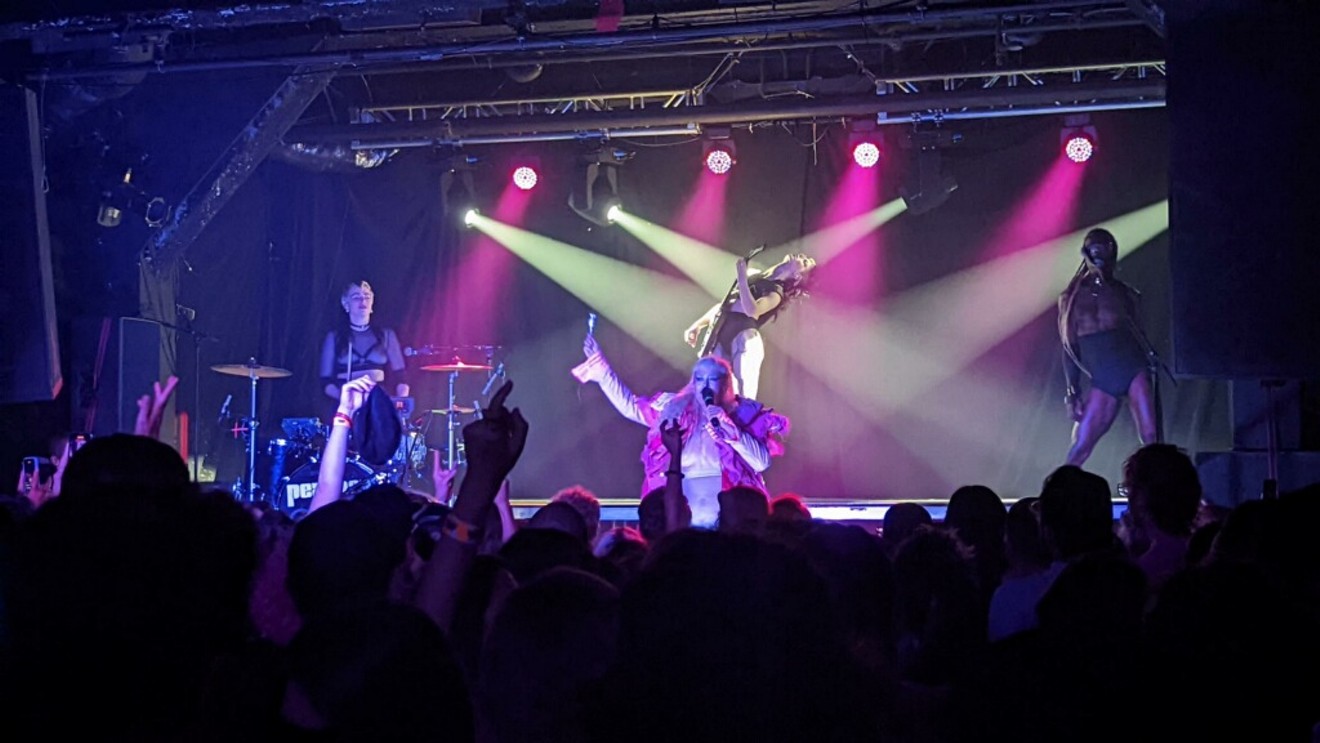 Peaches celebrated her classic album, The Teaches of Peaches, at the Ground. Photo by J.J. Colagrande
I'd always sworn that Peaches put on an incredible show. If my memory was correct, she was a ball of nonstop energy who had audiences simultaneously laughing and rocking their heads back and forth. But it had been many years since I saw her live, so surely last night's show at the Ground to celebrate the 20th anniversary of her debut album, The Teaches of Peaches, couldn't live up to the past. Time waits for no one, and all that.

At 9 p.m., Peaches toyed with my trepidation. She limped onstage, leaning onto a walker, a pussy hat on her head and a skimpy one-piece bathing suit barely covering her body. She cracked her neck theatrically, accompanied by exaggerated sound effects on the speakers. Then she pulled a microphone out of her purse, yelled, "Miami, I want to party!" and kicked her walker across the stage before rapping, "Motherfuckers want to get with me/Lay with me, love with me/All right."

For the next two hours, the Canadian artist didn't stop shocking or rocking.

Perhaps she's a New Times reader and read yesterday's article wherein Club Space (where the Ground is located) promised equal-opportunity dancing regardless of gender. During the opener, "Set It Off,"  Peaches did what many male rock stars take for granted: She shucked her top and performed bare-chested.

She had plenty of tricks besides letting her breasts hang out. The last time I saw her perform, it was just Peaches and her groovebox sequencer, this time she had a troupe accompanying her. A guitarist in fishnet stockings shredded their axe, drummers were brought out from time to time to kick a powerful beat, and dancers performed in various states of undress. Still, it was hard to keep your eyes off Peaches. Whether she was reciting X-rated lyrics, standing on the palms of her fans, or ending the night with a hammy, foul-mouthed rendition of Celine Dion's "It's All Coming Back to Me Now," Peaches knows how to hold an audience's attention throughout a two-hour show.

The tour was advertised as a celebration of her 2002 electroclash debut, The Teaches of Peaches. But Peaches didn't perform the songs in the same order as they appeared on the record; she interspersed the  11 tracks with songs from her two-decade career, highlighted by an arena-rock-meets-glam-rock rendition of "Boys Wanna Be Her," off 2006's Impeach My Bush.

"No, you didn't!" a couple of diehards yelled.

"I made it. I know what's on it and what I played," she teased before walking offstage.

Of course, she returned to play the album's opener — and The Teaches of Peaches' most emblematic song: "Fuck the Pain Away." Her entourage joined her, most of them topless, as all the anarchy and fun of her 2002 debut was brought to life.

Encore:
- "Fuck the Pain Away"

Encore 2:
- "It's All Coming Back to Me Now"
KEEP MIAMI NEW TIMES FREE... Since we started Miami New Times, it has been defined as the free, independent voice of Miami, and we'd like to keep it that way. With local media under siege, it's more important than ever for us to rally support behind funding our local journalism. You can help by participating in our "I Support" program, allowing us to keep offering readers access to our incisive coverage of local news, food and culture with no paywalls.
Make a one-time donation today for as little as $1.