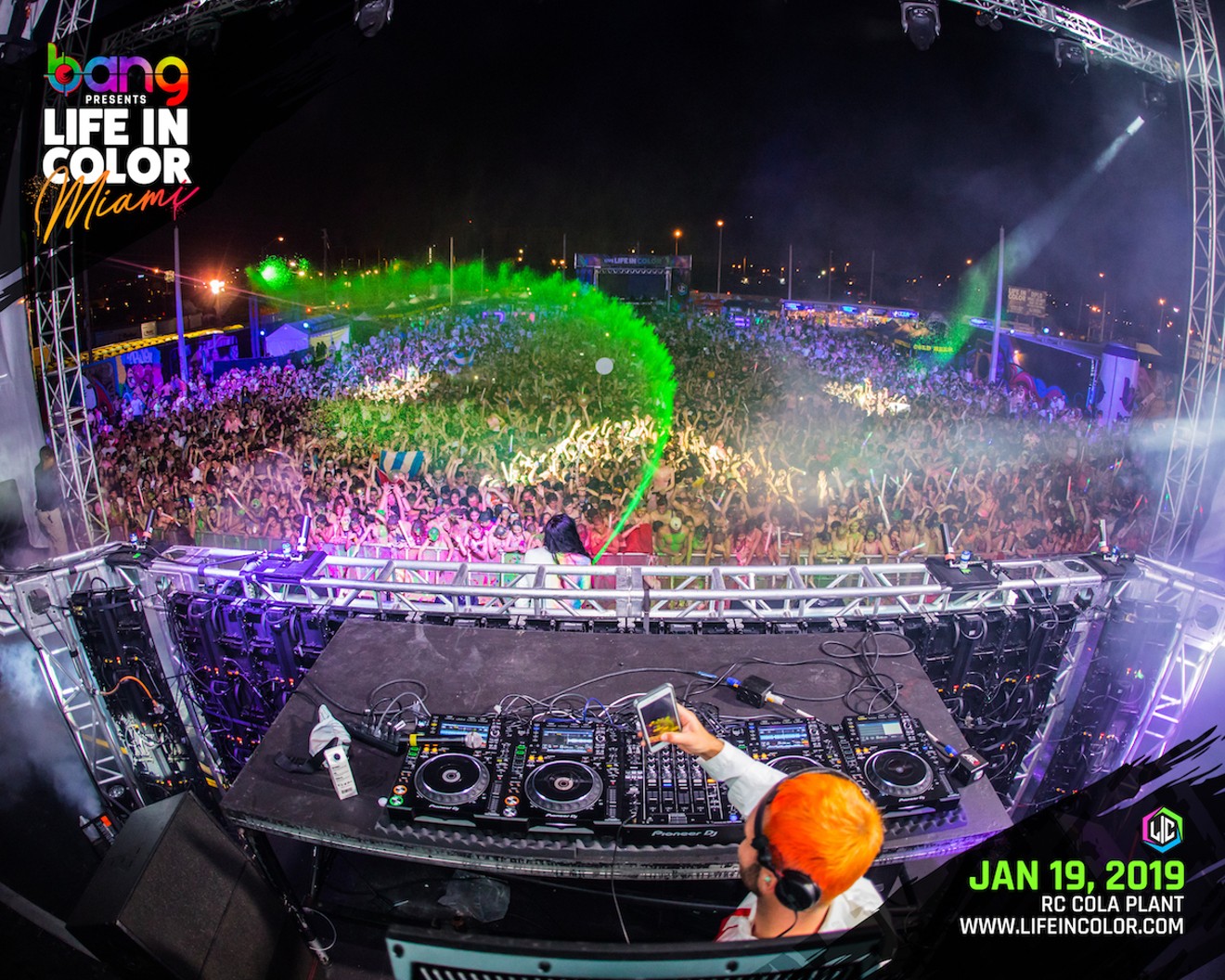 Photo by Adinayev
There were seven DJs on the bill for Life in Color this past Saturday night, but the main attraction for the thousands of people in attendance was the paint. Gallons of colorful liquid sprayed onto the crowd during the DJ sets. Men on the stage could barely control hoses spewing pink, orange, yellow, and green flumes. Vendors even sold paint for $5 a pop to attendees who wanted to add even more color to everyone's complexions.

Life in Color is 12 years into throwing what it advertises as "the world's largest paint party." It draws major EDM acts, but judging by the 2019 edition of the inaugural fest at the RC Cola Plant in Wynwood, we get the feeling that organizers could book DJs from the bar mitzvah and quinceañera circuits and still lure the masses as long as the paint was flowing.

And the paint did flow — into the dripping hair of dancers, onto the cartoonishly large panda masks worn on the heads of some attendees, and all over the bare chests and legs of the many who were scantily clad. The paint was a hit, but the music was hit-or-miss.

Photo by Adinayev
The biggest miss involved NBA legend Shaquille O'Neal, who performed as DJ Diesel. Though this writer has fond memories of Shaq helping the Miami Heat win an NBA title, I would rather watch a marathon of his worst movies — such as Steel, Kazaam, and Grown Ups 2 — than bored ever again by another of his hourlong sets of sonic monotony occasionally interrupted by his yelling, "I'd better see a motherfucking mosh pit before I leave." Shaq was obviously invited because of his celebrity, though you have to wonder how much of the largely teenage crowd was drawn to a basketball player who retired eight years ago. But because generous amounts of paint continued to spray during DJ Diesel's set, there weren't many complaints.

What So Not had the good fortune of performing next. The Australian producer's house music quickly got the dance-ready crowd moving. His tunes, traversing hip-hop, trap, and bass, were more melodic than Shaq's.

Photo by Adinayev
At a prompt 10:45, the headliner, Diplo, took the stage and began playing a snippet from Excision. The California-based label head of Mad Decent was the ideal party DJ for the Snapchat generation. If you didn't like one song he was playing, he didn't allow you much time to dwell on your distaste. He cut from dubstep to hip-hop to trap to pop while maintaining the same rapid beat. He skipped through the decades — from today with Kendrick Lamar to the '80s with A-ha's "Take on Me" to the '00s with Outkast's "Hey Ya" — all in the time it took to squeeze the contents from a paint container.

When the show was over at midnight and the pink-and-orange masses spilled onto the sidewalks of Wynwood, we had to wonder what those unaware of Life in Color thought of us. Did they think we were all working on a Wynwood mural together?
KEEP MIAMI NEW TIMES FREE... Since we started Miami New Times, it has been defined as the free, independent voice of Miami, and we'd like to keep it that way. With local media under siege, it's more important than ever for us to rally support behind funding our local journalism. You can help by participating in our "I Support" program, allowing us to keep offering readers access to our incisive coverage of local news, food and culture with no paywalls.
Make a one-time donation today for as little as $1.