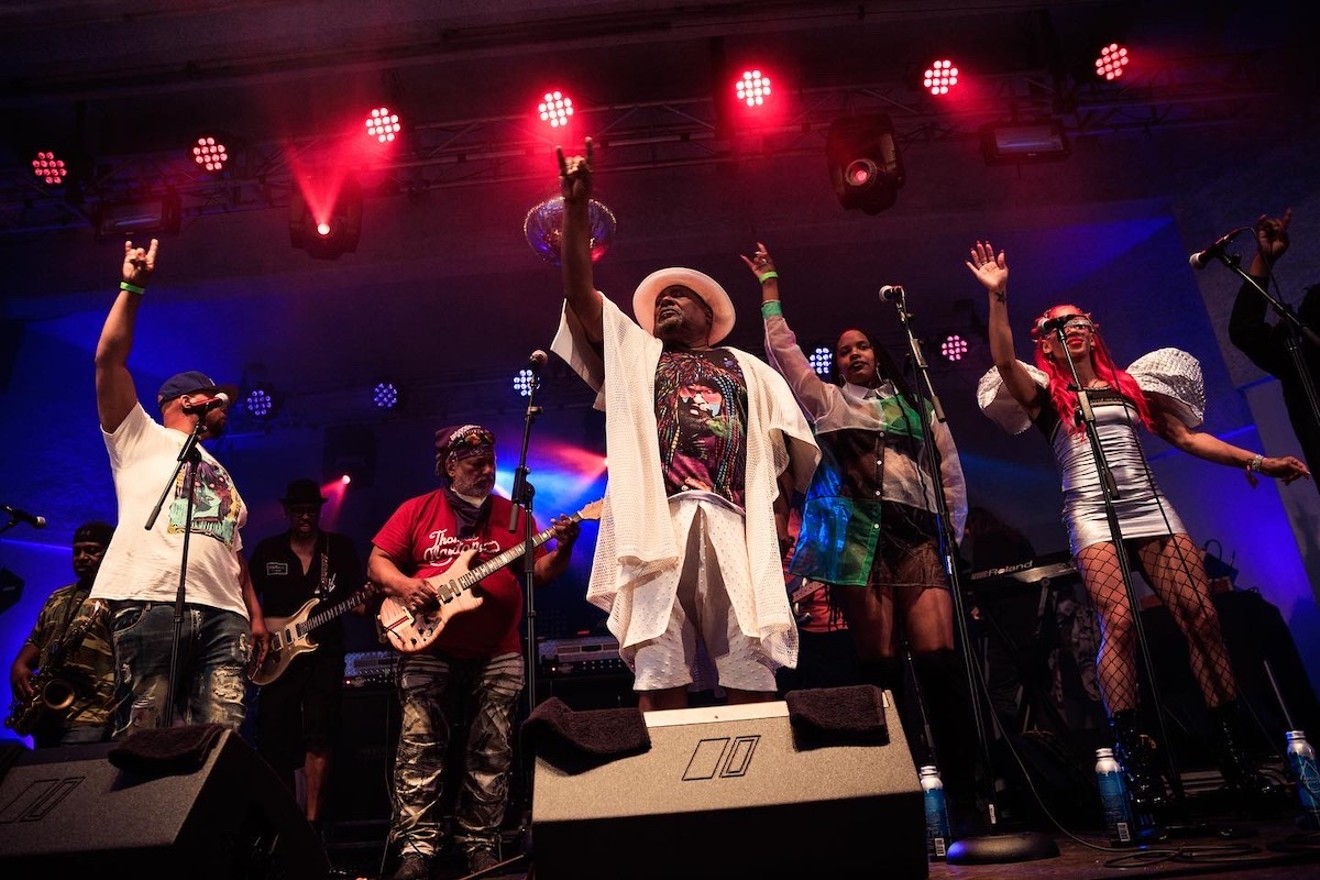 The rain couldn't drive the funk away from the North Beach Bandshell. Photo by Osmany Torres
People who want the funk gotta have that funk — and apparently, no amount of rain will stop them from getting it.

The weather reports and phone alerts might have been filled with flash-flood warnings from an oncoming potential tropical storm, but that didn't stop a few hundred people from making it out Friday night to see George Clinton & Parliament-Funkadelic, presented by Blue Note Jazz Festival, for what was billed as his farewell tour.

Preceding the concert, the North Beach Bandshell was inundated with callers asking whether the show would go on. The Ricardo Arjona concert at FTX Arena was canceled, and that was at an indoor venue. Surely, given that the bandshell is outdoors and George Clinton is 80 motherfunking years old, it wouldn't proceed.

"One Nation Under An Umbrella! Tonight's performance with George Clinton & Parliament Funkadelic is still scheduled to continue as planned. 8 p.m. rain or shine," the bandshell's Facebook page declared,

Sure enough, at 8 p.m. on the dot, Clinton and his uncountable ensemble of excellent musicians took the stage. The faithful were rewarded with a fun show. While Mother Nature did not provide ideal weather, at least it wasn't a monsoon. In 2020, the bandshell installed a solar-powered canopy, which served as a mushroom-shaped shelter that allowed a large portion of the crowd to dodge the steady rain.

George Clinton served as a master of ceremonies for his own celebration.
Photo by Osmany Torres
Clinton is the living and breathing embodiment of popular American musical history. His Parliaments started out all the way back in 1956 as a doo-wop group. They proceeded to evolve with the times. Under a couple of different names and guises, they became the touchstone band for the genre that became known as funk. Their sounds later served as the sampled beats and melodies for thousands of hip-hop songs, from Dr. Dre to A Tribe Called Quest to Childish Gambino. Clinton even helped shape the sound of the Red Hot Chili Peppers, producing a couple of their early records.

On this evening, dressed in a lily-white panama hat with matching jacket and shorts, Clinton served as a master of ceremonies for his own celebration. I'm not sure exactly how the format of his concerts back in his younger days went, but I'm pretty certain they didn't involve him seated in a chair at center stage and chilling for long stretches while his band jammed. Parliament-Funkadelic grooved through the countless formats of music that influenced them and that they, in turn, influenced, from jazz to rock to hip-hop, and they invariably returned to funk.

Clinton's deep drawl would enter from time to time to emit the famed monologues of absurdity of the sort that inspired a few of your favorite rappers to pick up the mic. He told the crowd not to adjust their radio before the band went into a great rendition of "P-Funk (Wants to Get Funked Up)." Then he started "Maggot Brain" by declaring, "Mother Earth is pregnant for the third time/For y'all have knocked her up," before longtime band member Mike Hampton shredded his guitar for the song's nasty solo. 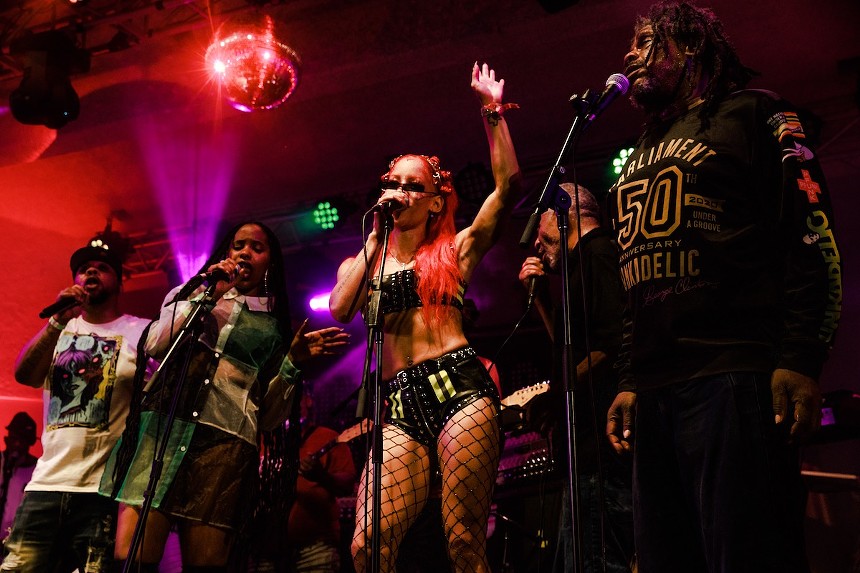 George Clinton and his uncountable ensemble of excellent musicians took the stage at the North Beach Bandshell.
Photo by Osmany Torres
I imagine it'd be challenging for any octogenarian to stand up for a full two-and-a-half-hour performance. When he did arise, the crowd showed its love. Clinton still delivered his trademark charisma and energy, egging on the audience to get their arms in the air. On a random cover of House of Pain's "Jump Around" that had the backing singers rapping Everlast's lines, Clinton showed off he still had a vertical leap, getting his feet off the ground to do as the song commanded.

For a man with his wild past, it's a minor miracle he's still on stage 60-plus years into a musical career. And he wasn't about to let a little or even a whole lotta rain delay his farewell to Miami.
KEEP MIAMI NEW TIMES FREE... Since we started Miami New Times, it has been defined as the free, independent voice of Miami, and we'd like to keep it that way. With local media under siege, it's more important than ever for us to rally support behind funding our local journalism. You can help by participating in our "I Support" program, allowing us to keep offering readers access to our incisive coverage of local news, food and culture with no paywalls.
Make a one-time donation today for as little as $1.