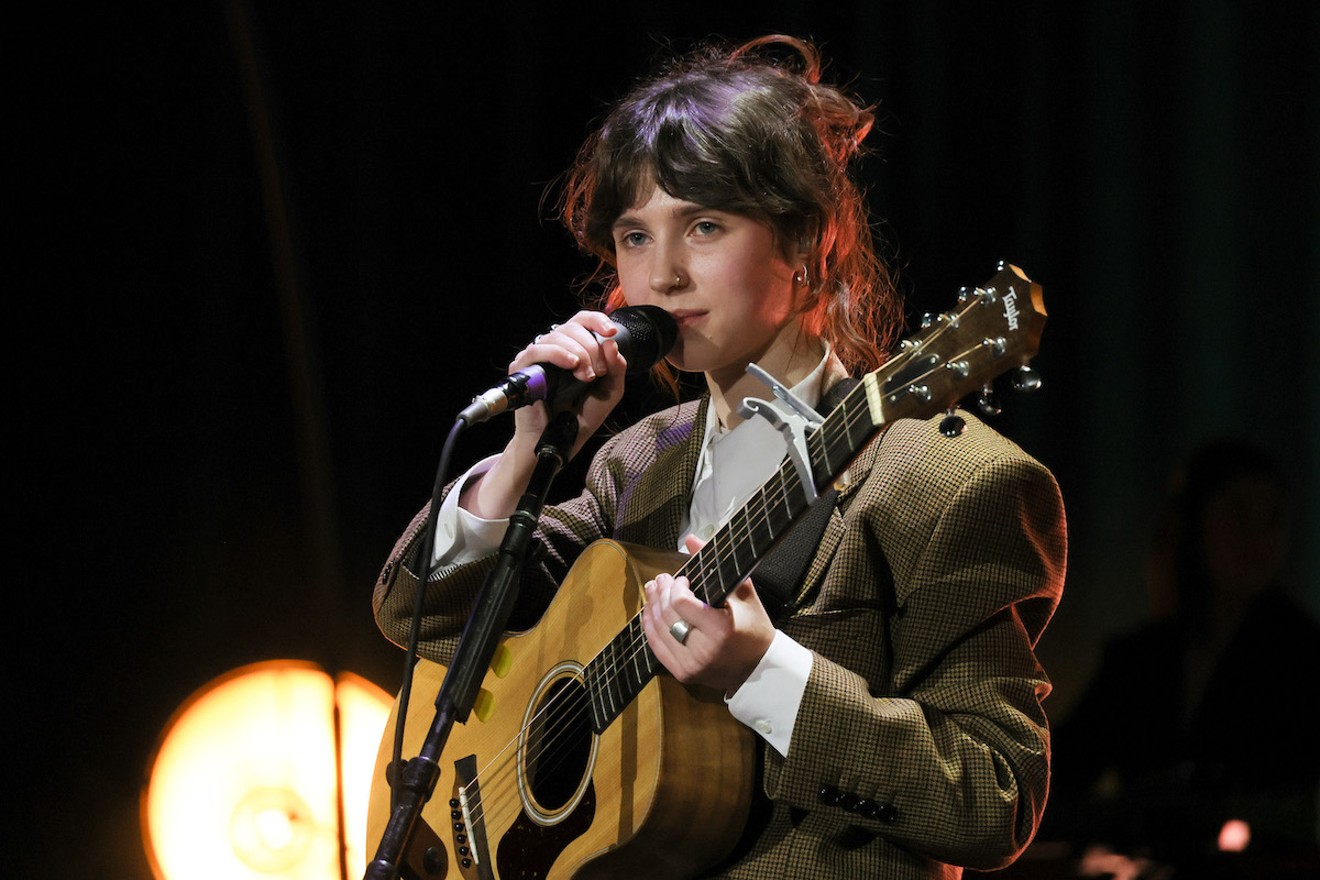 Clairo performing at Radio City Music Hall in New York City in February 2022. Photo by Dia Dipasupil/Getty Images
There was a good hour during last night's Clairo concert at the Fillmore Miami Beach when you could almost forget about the last two years. Sure, you had to have a vaccine card or proof of a negative COVID-19 test to enter the theater. And, yeah, there was the bummer news that openers Widowspeak had to cancel because someone in their crew tested positive for COVID, but for three-quarters of Clairo's 20-song set, you felt like you were inside a time capsule from a concert in 2019.

Clairo's fans were able to be roaringly loud in their approval with no facemasks to cover the volume of their enthusiasm. And social distancing was back to six millimeters, rather than six feet.

There was cheering even when Clairo said she would play us a brand-new song that hadn't been recorded yet, which would prevent her diehards from singing along with every confessional word. For this new song, "Nomad," Clairo sat down on the floor of the stage behind her tiny set of keys and began an up-tempo, bluesy number that could make you see why the 23-year-old singer has been said to sound like Fiona Apple's much younger soul sister.

But midway through "Nomad," she suddenly stopped playing. Earlier in the set, she stopped in the first verse of "Impossible" with a laugh because she said she'd forgotten the words. But this second stoppage felt different as the headliner looked into the crowd with concern. "Can we get security here?" she pointed toward the front tier of fans, where an audience member appeared to have collapsed. "Can we get some water?"

After a very long moment, things seemed to settle down for the distressed party, so Clairo stood up and said, "We're not going to finish that song." She and her backing band instead began playing "Reaper."

Maybe it's unfair not to focus of this review on the pros and cons on the evolution Clairo demonstrated adapting her early lo-fi bedroom pop recordings into a much fuller live sound. While she took turns strumming a guitar and playing a keyboard, she was supported by six musicians wielding everything from a flute to the saxophone. They showed a lot of variety and versatility, letting Clairo get folksy while picking at an acoustic guitar for "Blouse" and "Just for Today," and sounding reminiscent of Belle & Sebastian with the twee sound of "Zinnias."

But there was something emblematic about how quickly we were able to switch gears from focusing on someone in need of help in the audience to getting back into concert mode.

Life, as they say, is for the living, and nothing makes us feel as alive and free of worries as music. Many of us go to concerts to not spend every moment dwelling on Ukraine, fretting about a 14th wave of the virus, or worrying whether our city will sink into the sea in the near future and still our rents will increase.

And so after the final bows by the musicians, I should perhaps not feel too guilty that my thoughts were not focused on the person who was in dire enough shape to stop a show, but was blissfully whistling the perfectly poppy melody of "Sofia."

- "Bambi"
- "Zinnias"
- "Wade"
- "North"
- "Bags"
- "Harbor"
- "Alewife"
- "Impossible"
- "Softly"
- "Blouse"
- "Just for Today"
- "Little Changes"
- "Nomad"
- "Reaper"
- "Joanie"
- "Amoeba"
- "Management"
- "Pretty Girl"
- "Sofia"
KEEP MIAMI NEW TIMES FREE... Since we started Miami New Times, it has been defined as the free, independent voice of Miami, and we'd like to keep it that way. With local media under siege, it's more important than ever for us to rally support behind funding our local journalism. You can help by participating in our "I Support" program, allowing us to keep offering readers access to our incisive coverage of local news, food and culture with no paywalls.
Make a one-time donation today for as little as $1.