CD Review: Against Me! 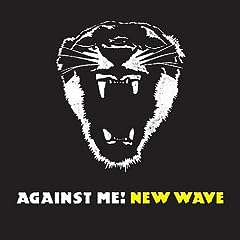 Against Me! New Wave

Gainesville's Against Me! shares a hometown with Lynyrd Skynyrd and, discounting the redneck caricature Skynyrd became after frontman/spiritual leader Ronnie Van Zant's 1977 death, a lot more: a keen eye for the flaws of leaders and those being led alike, and songs with sentiments as potent as their melodies. Singer Tom Gabel has the same populist ethos and thick-necked vocals of the Dropkick Murphys' Al Barr and Mike Ness; epic stalemate saga "White People for Peace" may be the best song Social Distortion never wrote. Against Me! certainly won't be contributing to the George W. Bush Presidential Library fund anytime soon — i.e., ever — but

goes beyond the simple polemics of so much post-American Idiot punk to suggest ordinary citizens may be as much to blame for America's current predicament as the present administration. (Or almost, anyway.) On "Americans Abroad," Gabel likens his band's European tour to the encroachment of corporations like McDonald's: "Profit-driven expansion into foreign markets," he sings. "While I hope I'm not like them, I'm not so sure." But

's best songs have little to do with politics. The infectious "Thrash Unreal" is a devastating portrait of the girl next door — any girl next door — imprisoned by unfortunate choices. "Borne on the FM Waves of the Heart," a heartsick duet between Gabel and Tegan Quin of Canadian indie sprites Tegan & Sara, resembles nothing so much as a beefed-up Rilo Kiley song, and "Stop!" uses an airtight disco beat lifted from Franz Ferdinand's "Take Me Out" to urge responsible decision-making. For both political and personal reasons,

is a lock for the short list of 2007's best albums and, presumptuous as it sounds right now, quite possibly the decade. It really is that good. -- Chris Gray