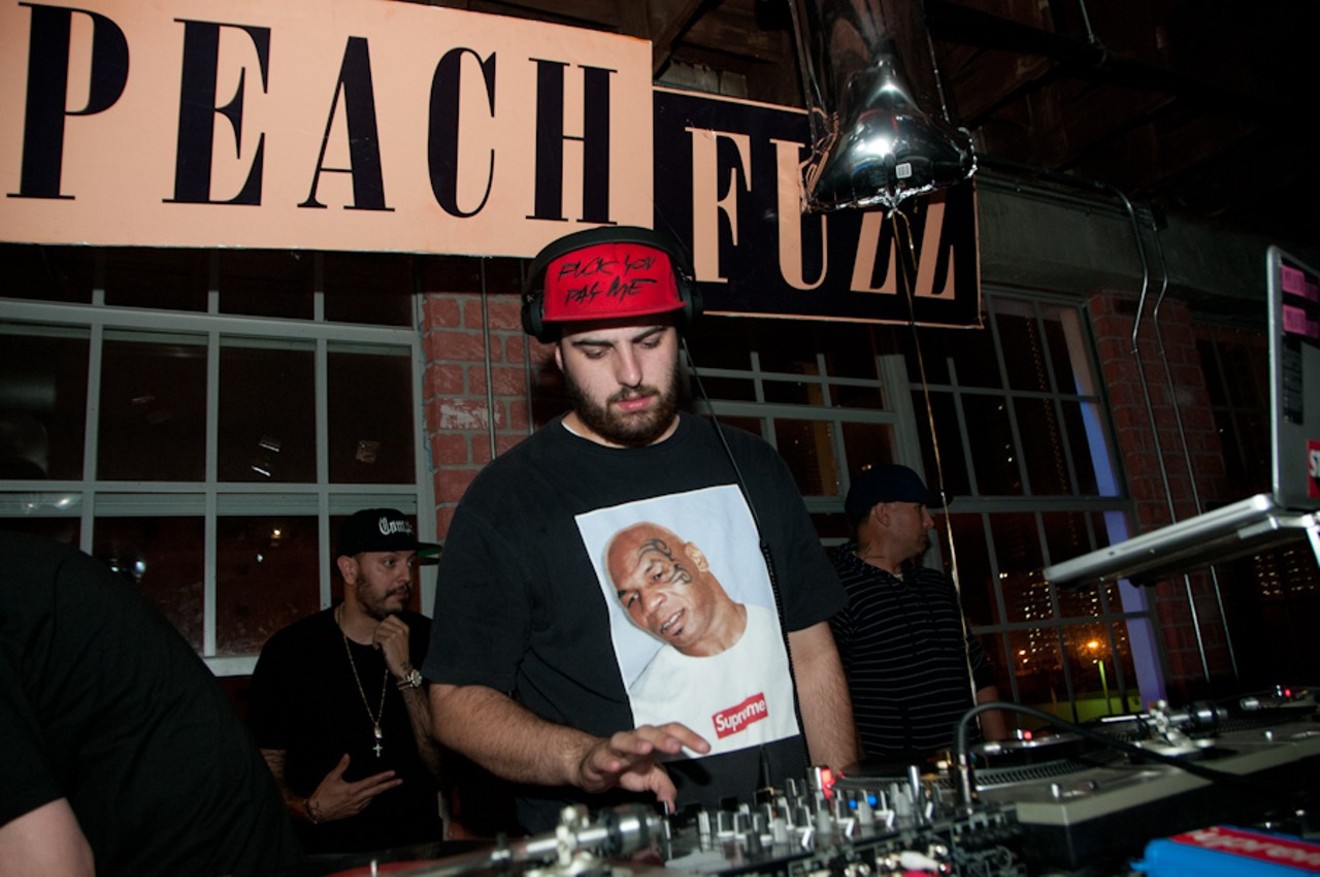 Peachfuzz returns at Freehold Miami. Photo by Yesenia Hernandez
Thanksgiving Day is tomorrow, and you'll have to endure your mom's comments about your weight and your grandfather's tirade about "those people." The holidays are anything but fun; that's why you're going to want to party hard the night before.

Thankfully, the night before Thanksgiving in Miami has become a boon for local nightclubs, and they are more than happy to host everyone in town for the holidays. Yes, there is a chance you'll bump into someone you went to high school with and stopped talking to as soon as you graduated — but that's what the alcohol is for.

So if you're looking for somewhere to escape quality family time before you are forced to sit down and eat dinner with them, here are six Thanksgiving Eve parties happening in Miami.

If there is one party that has come to define the Thanksgiving Eve festivities in Miami, it's Sweat Records and Vagabonds at Large's '80s Prom. It's been going on for 19 years, and it's set to return on Wednesday night at Gramps. DJs Lolo, Hottpants, Carlos Menendez, Carmel Ophir, and Rippin Kittin will provide all the decade-appropriate tunes while local band the State Of returns once again to perform a set of '80s covers. If that's not enough, you can expect a drag performance by local legend Adora, prom decorations, and a photo booth. 9 p.m. Wednesday, November 23 at Gramps, 176 NW 24th St., Miami; gramps.com. Tickets cost $10 to $20 via eventbrite.com.

Hoping to shake up (literally) Thanksgiving Eve is Bassgiving at Rácket. Living up to its name, the night presents a bass-heavy lineup that includes Merlyn, Shade, and Drop Zone. However, the reason you're going to want to go is the night's headliners: electro-bass duo Dynamix II and Aussie dubstep producer Hydraulix. There's a good chance you'll have to ask people to speak louder during Thanksgiving dinner the following day — which might be a good thing. 9 p.m. Wednesday, November 23 at Rácket, 150 NW 24th St., Miami; 786-637-2987; racketwynwood.com. Tickets cost $20 to $25 via eventbrite.com.

Canadian producer Demuir takes over the decks at Hyde Beach at the SLS South Beach on Wednesday night for a poolside Thanksgiving Eve set. Known for his eclectic house sounds, Demuir has released tracks on respected labels like Hot Creations and Desolat. He also leads his own record label, Purveyor Underground, where he's released tracks by acts like Steve Robinson, Torrfisk, and Jonasclean. 9 p.m. Wednesday, November 23 at Hyde Beach, 1701 Collins Ave., Miami Beach; 305-455-2990; sbe.com. Tickets cost $15 to $40; free before 11 p.m. with RSVP via eventbrite.com.

Party promoter Un_Mute brings Dutch producer Ion Ludwig to Miami for a Thanksgiving Eve party at Lost. Known for his minimal techno sound, Ludwig first appeared on the electronic music scene in 2006 with tracks like "Aleroguna" and "Pornslices." From the get-go, he left his mark with his left-field productions that seem to temper techno's more abrasive qualities yet still pack an emotional wallop. Also on Wednesday night's bill are Cem Ozden and Rafa. 11 p.m. Wednesday, November 23 at Lost, 30 NE 14th St., Miami. Tickets cost $11.35 to $22.75 via ra.co.

New York City producer Victor Calderone has been spinning since the 1980s. Throughout his career, he's remixed tracks for Madonna, Sting, Beyoncé, and Depeche Mode. This is all to say that Club Space's terrace will be in good hands on Thanksgiving Eve. If that's enough to convince you to stay out all night, Swedish techno maven Ida Engberg will also be churning out the beats. Alongside her husband, Drumcode's Adam Beyer, she's basically considered techno royalty. 11 p.m. Wednesday, November 23, at Club Space, 34 NE 11th St., Miami; 786-357-6456; clubspace.com. Tickets cost $20.39 to $37.47 via dice.fm.

Peachfuzz started in 2011 as a low-key party in the upstairs space at the long-gone Grand Central. With the tagline "Your girl's favorite party," it focused on the kind of hip-hop and rap music you tried to bust a move to during middle- and high-school dances — think Trick Daddy, Notorious B.I.G., and Outkast. The party, which has become more of an occasional pop-up, makes a comeback on Wednesday night at Freehold Miami. DZA and Spinser Tracy will be on the decks. 10 p.m. Wednesday, November 23 at Freehold Miami, 2219 NW Second Ave., Miami; 305-280-0330; freeholdmiami.com. Admission is free with RSVP via posh.vip.
KEEP MIAMI NEW TIMES FREE... Since we started Miami New Times, it has been defined as the free, independent voice of Miami, and we'd like to keep it that way. With local media under siege, it's more important than ever for us to rally support behind funding our local journalism. You can help by participating in our "I Support" program, allowing us to keep offering readers access to our incisive coverage of local news, food and culture with no paywalls.
Make a one-time donation today for as little as $1.