Beach House performs at Revolution Live. See more photos from the show here. Christina Mendenhall
In Japan, there is a form of puppet theater called bunraku that is nothing like any western art form. The puppeteer stands onstage, fully visible to the audience, blank faced and completely focused on manipulating the intricate controls in the puppet. To aid him, a group of masked, black-suited, ninja-looking stage hands hold him up. We, the audience, are meant to ignore them – they are not part of the story, they’re only making it possible.

Beach House, the Baltimore dream-pop band, are not puppeteers, and they did not appear to be on strings at the Revolution Live on Saturday evening. But for most of their performance, they were as faceless as those bunraku stage hands. Lit from behind, shrouded in shadow, only their silhouettes could be seen.

Over six albums, Beach House’s signature style of dream pop has evolved from bedroom balladry to grand, anthemic pop to shoegazing indie rock. Yet their work maintains a supreme sense of cohesion, even across a short set that spans their entire career. Every Beach House tune has a certain set of markers: a slow tempo kept by a drum machine beat, an electric organ providing a sonic backdrop and a searing, surf rock-inspired slide guitar played by Alex Scally. But the key to the formula is Victoria Legrand’s vocals, sometimes light and airy, other times sonorous and full, but always captivating.

Christina Mendenhall
Onstage, Legrand takes the center. Even as a dark outline, she cuts an impressive figure – hunched over the keyboard, flipping back bushy hair at moments of highest intensity. Yet there is a sort of anti-stardom about her and the rest of the trio. Their hiding themselves is deliberate – they want us to focus on the music, not the people making it. They want to intensify it. And they succeeded.

The band managed built up their catalogue of mostly low-key tunes into an overwhelming show of musical force. Every song was scaled up, played bigger than on record. Here, we truly feel the building intensity of “10 Mile Stereo,” which erupts as the chorus reaches its crescendo. Here, a low key song like “Master of None” – the only one played from their self-titled debut – becomes a dark reflection of itself with an angular guitar intro and seedier vocal interpretation. And here, the fade-out ending of “Elegy to the Void” turns into the raging, eardrum-splitting rock jam it was meant to be (and this was the last show at which you might expect to get hearing damage).

Just as intense as the music, however, was the visual effects. Their lighting setup was relatively uncomplicated – a blank backdrop and a bar of LEDs on the floor – but managed to complement the band expertly. Floral projections accompanied “Equal Mind,” from Bloom. A starry sky came up during “PPP,” followed by an aurora borealis effect. The most effective of these backgrounds was arguably the simplest: for cuts from their album Depression Cherry, the screen would glow deep red, the color of the LP’s cover while the lower lights would flash and strobe at opportune moments. Again, their message: don’t watch the screen, just focus on the music. 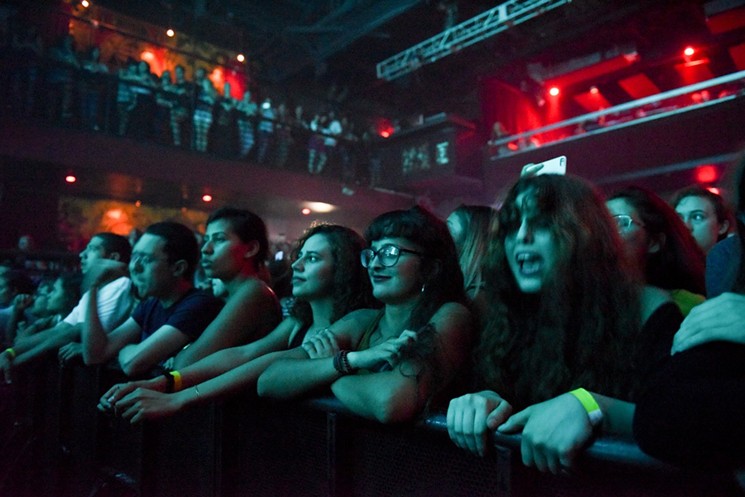 Christina Mendenhall
The crowd was completely taken in by all this. The band had said in interviews that they were hoping for a more intimate setting than their last South Florida show, at the palatial Fillmore Miami Beach. The change of venue to Revolution may have solved the problem, but it also led to a packed building: every inch of free space, from the pit to the rafters, was filled with a warm, adoring audience that cheered every climax, roared at every perfectly-executed VFX move. When Legrand mentioned between songs that her birthday was the next day, she had to stop them from singing to her, slightly embarrassed by such worship.

The room was, of course, pitch black during this interaction. We couldn’t see anyone onstage, but we could certainly hear them. And that’s the point: for this band, the magic and romance is in the music, rather than the people who make it. Ignore the puppeteers – they’re just the people behind the show.