The Best and Worst Moments of Ariana Grande's Past Year 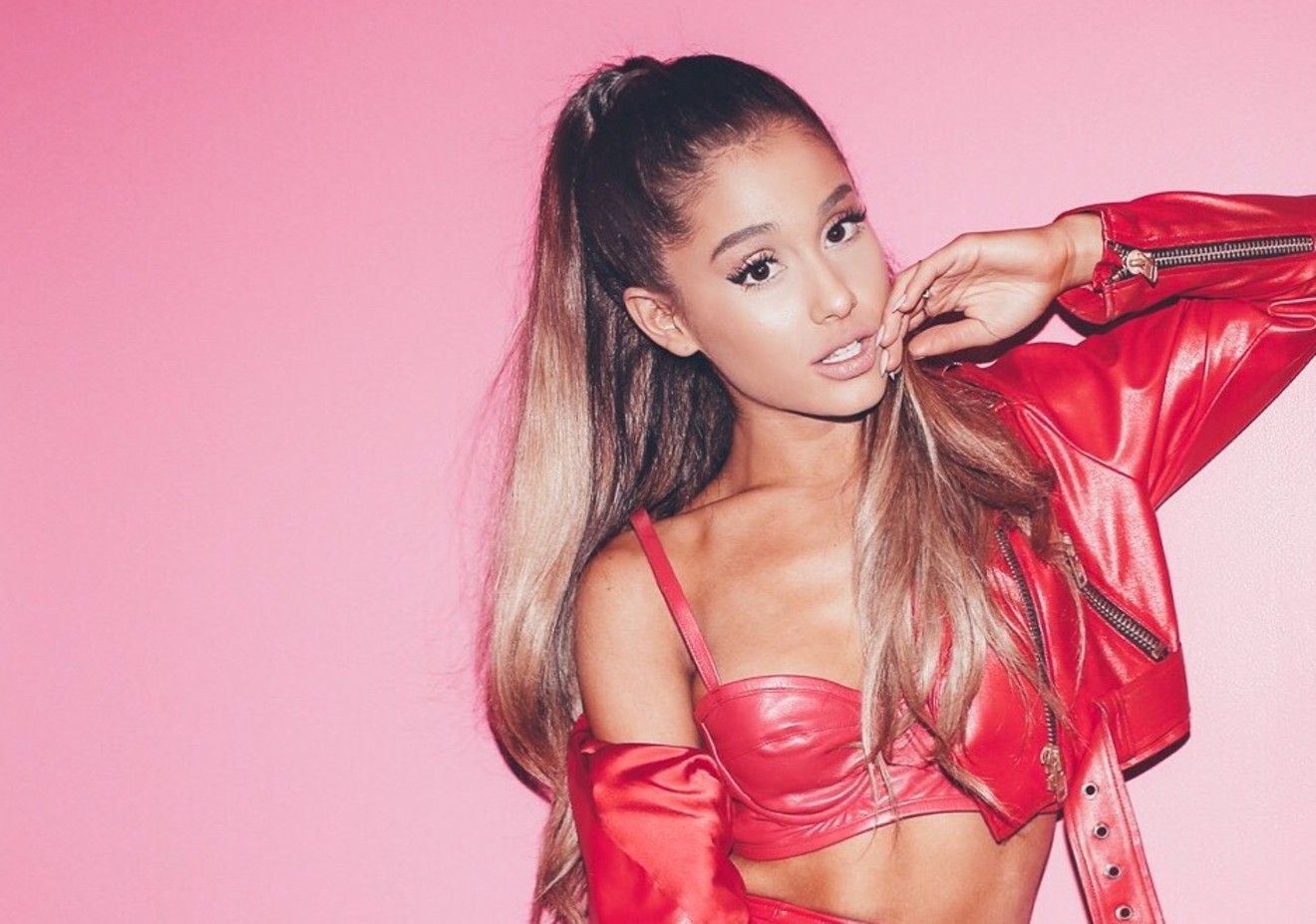 Ariana Grande Republic Records
They say a lot can happen in a year, but when it comes Ariana Grande, that's an understatement. The Boca Raton-born pop star has had a roller-coaster career, but this past year has been especially eventful. We watched all her greatness and her low moments unfold. It began with the loss of her ex-boyfriend and concluded with a star-studded Coachella performance. Before Grande brings her Sweetener Tour home to Miami this Friday, May 31, we have a recap of the long-ponytailed queen's 2018-19.

Lost Mac Miller. Dealing with a loss of your significant other — even if you have broken up — is hard. In September 2018, Ariana Grande awoke to the news that her boyfriend of two years, rapper Mac Miller, had passed away from a drug overdose. Weeks before Miller's passing, she had taken to social media to explain their split and wish him all the best, and then seemingly moved on quickly to Pete Davidson. Because the breakup and death were both very public, the pop star faced criticism and threats on social media.

Headlined Coachella. As a musician, if you haven’t performed at Coachella, you can't truly say you’ve “made it.” While Ariana Grande has had several pivotal moments in her career, headlining the desert-based music festival was a dream come true. Her Coachella set comprised 26 songs, including a tribute to Mac Miller and an appearance by (almost all of) NSYNC. She gave the audience old gems and new hits from her latest album thank u, next, while blessing them with four outfit changes and her signature ponytail. While her performance was compared to Beyoncé’s in payment and setup, the pop princess put her own spin on how Coachella should be done.

Released two albums in a six-month span. It’s safe to say that in 2019, we consume music at an alarmingly fast rate. Once our favorite artist releases a new album, we compulsively listen to it for three days, then demand new music by tweeting at the artist. Ariana Grande got all your rude tweets and prepared for a second album after her 2018 release of Sweetener, which contained the sultry bops that still have replay value today, such as "God Is a Woman," "No Tears Left to Cry," and "The Light Is Coming." Then in February 2019, Grande debuted thank u, next, a light-hearted pop masterpiece that satisfied her fans' desires for more. “i don’t really like eras,” says Grande on Twitter. “i just wanna make music and drop it whenever and perform it. i don’t want to conform to the like... ‘routine’ or like ‘formula’ anymore. i love music i ain’t waiting another 2 years to drop it. i want to share it w u when it’s freshhh.”

Got engaged to Pete Davidson. They say the best way to mend a broken heart is to take your mind off it with someone new. We’re not relationship experts, but soon after breaking up with Mac Miller, Grande tried out the theory by jumping into the arms of SNL star Pete Davidson. They allegedly met in 2016, and the relationship moved from dating to matching tattoos to public outings to engagement in the blink of an eye.
Appropriated black culture. Appropriating black culture as a white musician seems an easy way to get the attention of black fan bases, and it never ends well. While this has seemingly not been an issue for Ariana Grande, things went left with the release of her single “7 Rings.” The trap-based pop song channeled several black culture references without giving credit, and Grande didn't acknowledge that even after being called out on it. Rapper Princess Nokia, 2 Chainz, and Soulja Boy all gave the pop princess their two cents about the song's flow and subject matter as they’ve all had key elements of the single stolen from them in prior releases. Grande then attempted to save herself by adding 2 Chainz on the "7 Rings (Remix)," but the damage was already done.

Appropriated Japanese culture. Grande’s single “7 Rings” continued to be problematic as the Japanese noticed the symbolism used in the music video, which references glamour, riches, and Japanese icons — which were also released on her merch line. Throughout the video, you’ll find items relating to Japanese culture including sushi and cat figurines. To be fair, the pop star has been taking Japanese lessons since 2015 and has expressed her love for the culture, but leave it to the internet to take it the wrong way.

Won her first Grammy. Every musician wants to win a Grammy. It's a physical token of hard work, dedication, and clout you can’t buy. Grande skipped out on the 61st annual Grammy Awards at the last moment because, she claimed, producers were stifling her creativity. But she didn’t waste her stunning gown; she took photos of it for Instagram all over her house. Then she was surprised to win best pop vocal album for Sweetener. It was her first Grammy win, from her fourth studio album. She thanked her fans from her bed in a tweet.

Got a shitty tattoo. The pop singer's difficulty with “7 Rings” continued with a shitty tattoo. To celebrate the success of the single, Grande tattooed what she believed was a depiction of seven rings on the palm of her hand, only to be completely torn apart by her Japanese fan base when she posted it. She marked it "shichirin," which translates to a small Japanese barbecue grill, and then tried to correct her mistake by adding another symbol but instead ended up with “Japanese finger grill.” At this point, she opted to leave it alone.

Came out as bisexual — maybe? In 2019 sexuality is fluid, and society has made it more normal to accept anything other than the heterosexual agenda. In a recent release with singer-songwriter and best friend Victoria Victoria Monét titled "Monopoly," Grande sings that she likes women and men. The lighthearted tune seemed to be a joke, as the visual for it took components of memes and looked liked it was shot on a camera from 2005, but with Grande, you never know.

The face of Givenchy. Grand follows the lead of Audrey Hepburn and Grace Kelly by becoming the face of French design house Givenchy. After the tease of a silhouetted woman swinging a long ponytail, it wasn't hard to guess who the next influencer would be. “I don’t have words to describe how much this partnership means to me. such an incredible honor and with a brand i love sooooo much. thank you from the bottom of my heart and i’m so excited for all,” Grande said on Instagram. Her campaign is set to release in July.

Ariana Grande. With Normani and Social House. 8 p.m., Friday, May 31, and Saturday, June 1, at American Airlines Arena, 601 Biscayne Blvd., Miami; 786-777-1000, aaarena.com. Tickets cost $30.95 to $279.95 via ticketmaster.com.
KEEP MIAMI NEW TIMES FREE... Since we started Miami New Times, it has been defined as the free, independent voice of Miami, and we'd like to keep it that way. With local media under siege, it's more important than ever for us to rally support behind funding our local journalism. You can help by participating in our "I Support" program, allowing us to keep offering readers access to our incisive coverage of local news, food and culture with no paywalls.
Make a one-time donation today for as little as $1.