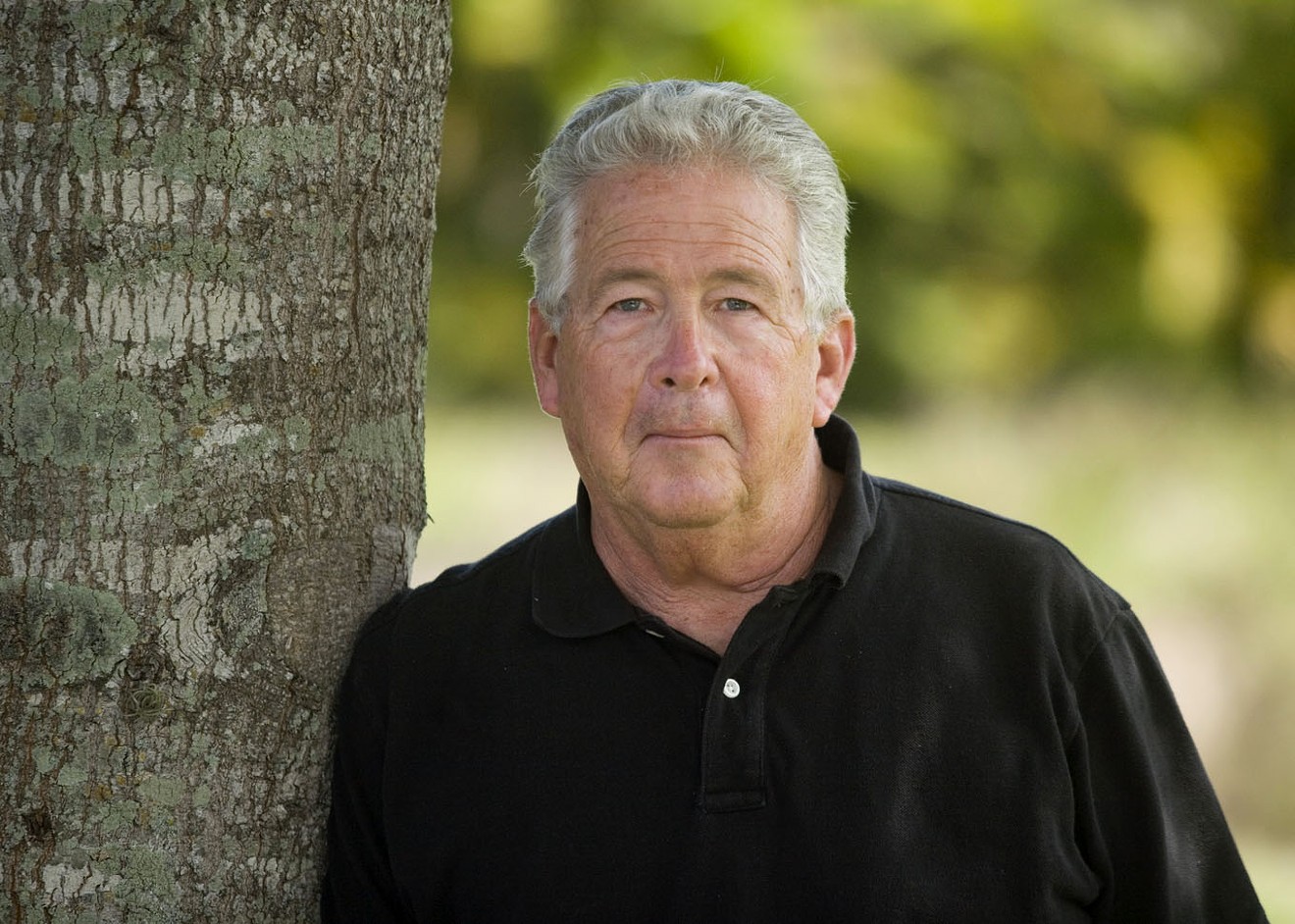 Robert Platshorn was the leader of the Black Tuna Gang in the '70s. Jacek Gancarz

Dressed in a white guayabera and loose-fitting grandpa jeans, Robert Platshorn walks onto a small stage set up in the clubhouse of Lakes of Delray, a 55-and-over condo development in Delray Beach.

About 300 snow-haired residents sit on dining-room chairs on in early March. They've shown up to hear Platshorn talk about the herbal remedy that cost him the prime years of his adult life. "I'm the guy who spent 30 years in prison for marijuana," Platshorn tells the crowd. "First offense. Nonviolent. Yet I got the longest sentence ever given at the time: 64 years."

In the 1970s, the septuagenarian was a leader of the Black Tuna Gang, a pot-smuggling crew Platshorn assembled with two pals that became law enforcement's first big catch in the War on Drugs. In its heyday, the Black Tuna Gang transported 500 tons of high-grade Santa Marta Gold cannabis from Colombia into the United States, which spawned a 36-count criminal indictment against Platshorn and his cohorts.

"When we started bringing in that really good Colombian Gold, that became the mother strain for every good medical strain in the U.S. today," Platshorn boasts. "The Colombian Gold we used to bring in was about 18 percent THC. That's the stuff that makes you feel good, makes you smile, gives you a good night's sleep, and helps get rid of the pain. It is also the part of the plant that is most effective against cancer and a whole lot of other things."

Nearly a decade after his early prison release, Platshorn has transformed himself into Florida's leading pot advocate for the elderly, which is the fastest-growing segment of the medical marijuana market. A September 2018 study by the New York University School of Medicine and the Center for Drug Use and HIV/HCV Research shows the proportion of people aged 65 and older who use marijuana grew from 0.4 percent in 2007 to 3 percent in 2016. Cannabis use among adults between 50 and 64 grew from 4.5 percent to 9 percent during the same period. In California, the most progressive legal cannabis state in the nation, retirees take field trips to cannabis coffee bars where they can play bingo over lunch while selecting their monthly supply of marijuana-infused products.

The ex-Black Tuna Gang captain, who has a medical card, says he eats a graham cracker glazed with cannabis oil daily to prevent skin cancer. "Seniors are a major segment," he says. "If you walk into a dispensary anywhere in the state, you will see that 70 to 80 percent of the people who buy are seniors."

"We serve a free buffet, and we have doctors and nurses to answer medical questions. It's a packed house every time."

Though Florida's Office of Medical Marijuana Use does not have age breakdowns on the 150,000-plus Floridians who have been issued medical marijuana cards, Platshorn's full calendar of retirement community appearances provides anecdotal evidence that seniors represent a significant portion of the Sunshine State's legal cannabis customer base. His "Silver Tour" presentations are sponsored by Trulieve, Florida's largest medical marijuana grower and distributor. This month, Platshorn booked appearances at the Parkinson's Expo at the Bradenton Area Convention Center in Palmetto and two retirement communities.

"When I started the Silver Tour in 2010, nobody wanted to hear me," Platshorn says. "Now we are being invited to nearly all the senior communities in South Florida. We serve a free buffet, and we have doctors and nurses to answer medical questions. It's a packed house every time."

During his speeches, the 76-year-old cannabis activist briefly recounts his smuggling career and his prison stint before launching into his reasons for promoting marijuana use among people his age. "They have more open minds now," Platshorn says. "You can talk about how cannabis can be used to treat Alzheimer's, epilepsy, Crohn's disease, and other ailments. Most of them want to try cannabis because, if nothing else, they know it will help get them off opiates that can kill them."

But the Florida Legislature remains their biggest impediment to getting it, Platshorn warns. During the current legislative session, members of the state House are trying to ram through a bill that would drastically reduce THC levels in marijuana plants grown by half of the 14 licensed medical cannabis companies in Florida. The measure would cap THC levels at 10 when industry standards range from 15 to 24 percent.

"They like using the argument that today's marijuana is much more potent than the one grandpop smoked," he says. "The Santa Marta Gold I smuggled has as much THC as today's medical strains. So it is absurd to say it is ten times stronger."

If the cap became law, the black market would explode, Platshorn claims. "The stuff being sold in the dispensaries is top-shelf," he says, "but if the Legislature passes the 10 percent maximum, the black market will be the only place to get good weed."