You know what's the cutest thing in the world? A family of otters frolicking in the water out in the wild, that's what. It's so damn cute you just want to puke rainbows and unicorns all over the place. And one spot in the world where you might just witness it is Big Cypress Bend Boardwalk in Fakahatchee Strand Preserve State Park. If you don't spot otters, it won't matter, because you're still immersed in the River of Grass on a boardwalk that goes an easy half-mile you're gonna want to take real slow. The birds are breathtaking — anhingas with wings spread like vampires, the blue heron's graceful S-shape neck, a peregrine falcon's detached majesty. You'll see massive cypress trees, some of them coiled in the grip of strangler figs, their long and arthritic fingers engaged in perhaps the slowest form of homicide on the planet. And of course there'll be the requisite alligators and raccoons, maybe a snake or two, the aforementioned otters, even an occasional black bear. The journey equals the destination: roughly 90 minutes from Miami on the Tamiami Trail, one of the greatest American drives. Turn off the phone, savor the disconnect, and treat yourself to some prime Everglades therapy.

As you float along the crystal-clear blue water of Rock Springs, admiring the lush forest surroundings and the occasional deer or wild turkey scurrying past, you might just manage to convince yourself you've found paradise. Only 30 miles outside of Disney World lies an Eden that not even Walt's Imagineers could re-create. While Rock Springs' 68-degree water temp might at first seem cold to a Floridian's tropical bloodstream, your body will eventually feel refreshed, even if your eyes and brain may never accept such natural beauty existing so close to home. If you want to put the "lazy" back in "lazy river," bring your own inner tube, canoe, or kayak, or rent one from a vendor outside the park. Otherwise, if you're a decent swimmer, you can easily stroke along the three-quarter-mile length of the park. When you reach the end of the creek, you'll probably walk back to the mouth of the springs and do it all over again. Entrance to Kelly Park costs only $3 a vehicle per day and campsites are available with an advance reservation.

You don't need to journey all the way to Key West for that island life feel. Only about an hour from Miami, camping overnight at John Pennekamp Coral Reef State Park will make you wonder why humans live in houses and apartment buildings. Hiking, fishing, snorkeling, diving, paddling, picnicking, sunbathing, swimming — the park offers it all. That, plus more than 40 campsites, complete with electrical outlets to help you stay connected if you can't bear to cut the cord. If you seek a true escape from the modern world, there's a "Primitive Group" camping area where no electricity is available. The park is also accessible to those who use wheelchairs. Travel by boat or RV? The grounds are equipped with water and sewer hookups. Pets and alcohol are permitted, so your most vital needs are met. Reserve your site today, happy camper! 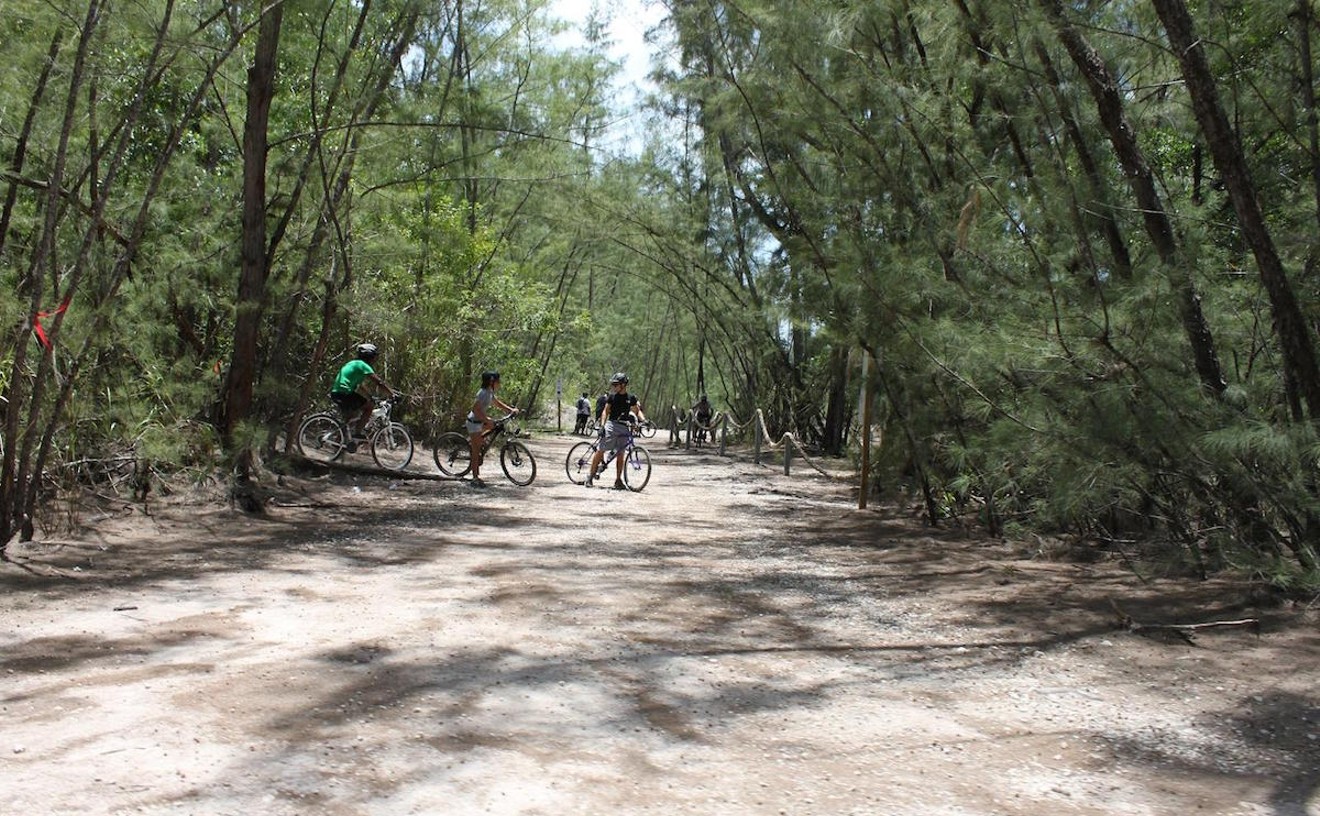 Hidden natural gems like Oleta River State Park make our hometown a go-to spot for kayakers. And thanks to the Oleta River Outdoor Center (786-274-7945; oletariveroutdoors.com), which operates a concession inside the park, you can get into the water with no fuss, whether you choose to rent a single-person kayak ($35 for an hour and a half) or a tandem vessel ($45). Beginners and veterans alike will find suitable routes that are conveniently marked on a visitor map. No matter which route you select, you'll find yourself among the mangroves and marshy plant life that give South Florida its natural distinction. And if you make it out far enough, you'll find yourself on an island where generous boaters might just offer you one of their brews on the beach. Hours: Monday through Friday: 9 a.m. to 1 hour before sunset; Saturday-Sunday 8 a.m. to 1 hour before sunset. 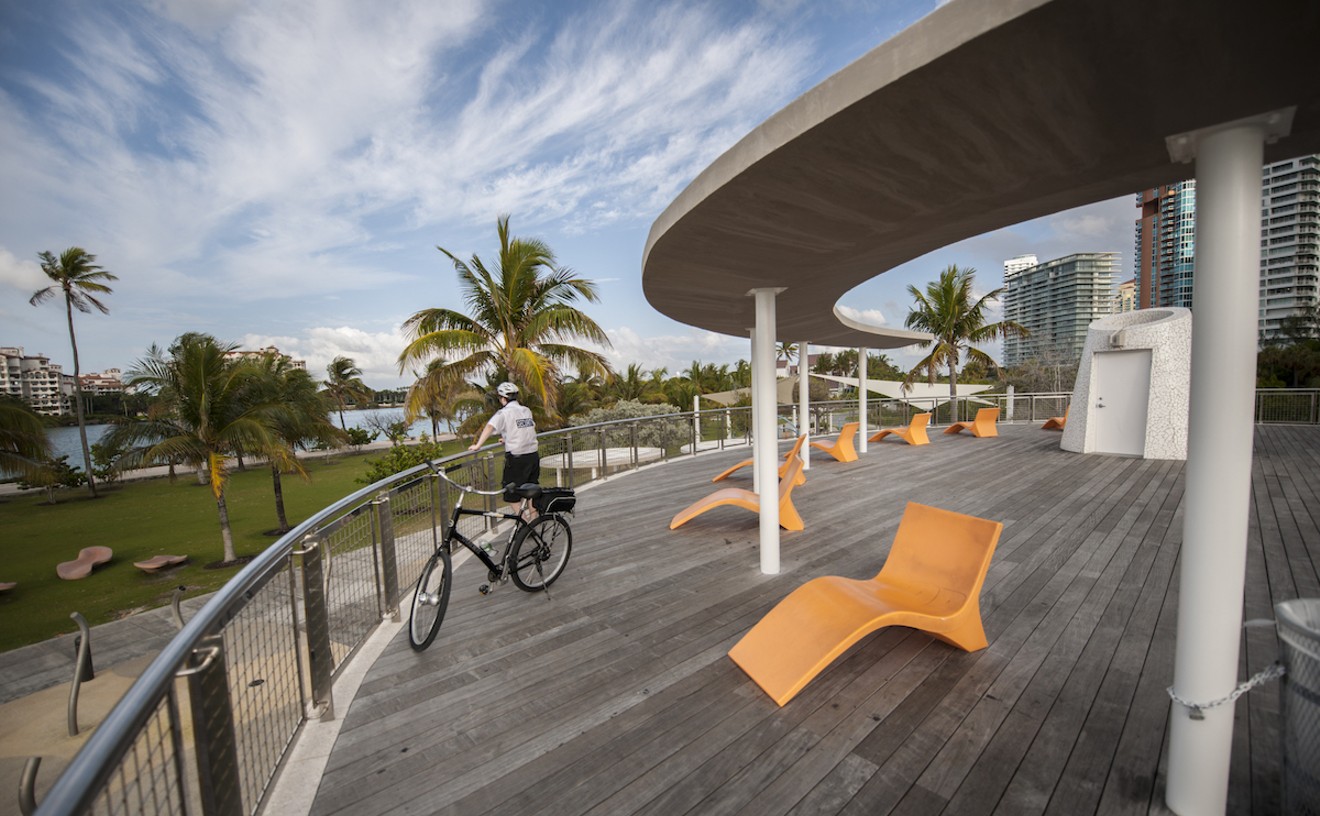 It ain't the Panama Canal or the Transcontinental Railway, but on the local scale of Major Urban Accomplishments, the Miami Beach Beachwalk is a monumental feat. Finally, a car-free path that spans the seven miles of the City of Miami Beach from south to north (and vice versa)! And with ocean views, no less! Just in time for Memorial Day of 2022, the final piece of the beachfront path was completed, meaning bicyclists can now pedal from South Pointe Park all the way up to 87th Street and the border with Surfside without encountering a single car — not even an intersection! If you glance past the sea grape trees to the east, you'll catch our world-famous beach, and to the west, the art deco and more modernist architectural wonders of Ocean Drive and Collins Avenue. But don't forget to look straight ahead, as you will be sharing this new thoroughfare with gaggles of pedestrians, joggers, and in-line skaters. Note: Intrepid two-wheelers can roll well beyond where the pavement ends if they care to — all the way up to Haulover Inlet. 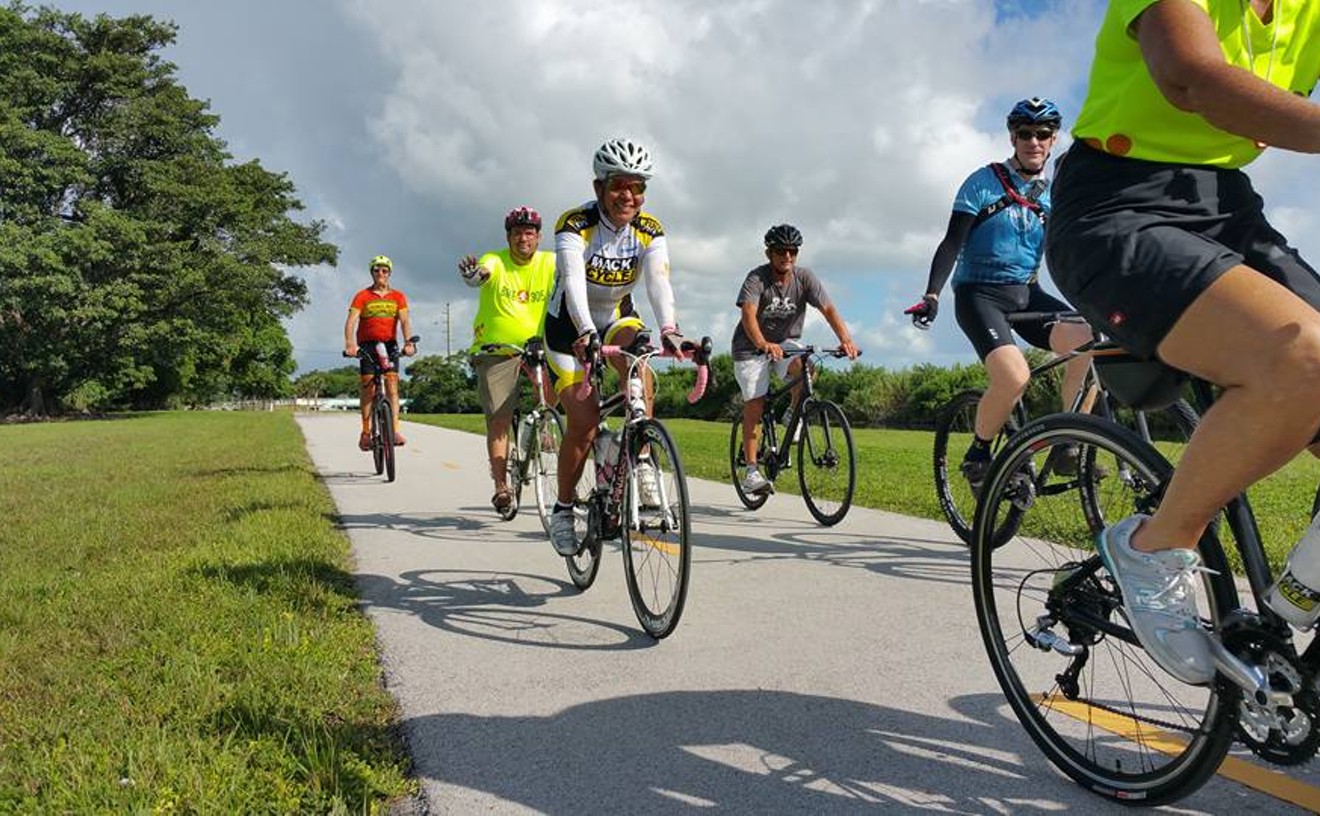 You say you jog along Miami's urban thoroughfares, cheek-by-jowl with reckless drivers and raging Pollo Loco customers? What? Are you nuts? Find peace and serenity along the 8.9 miles of Black Creek Trail, which winds northwestward along its namesake canal from Black Point Park and Marina to SW 176th Street and Lindgren Road near Larry and Penny Thompson Park in West Miami-Dade. Pace yourself along the paved path, lulled by the lush greenery. You're likely to spot birds and amateur fishermen, maybe even a manatee or two. But you won't have to contend with traffic. 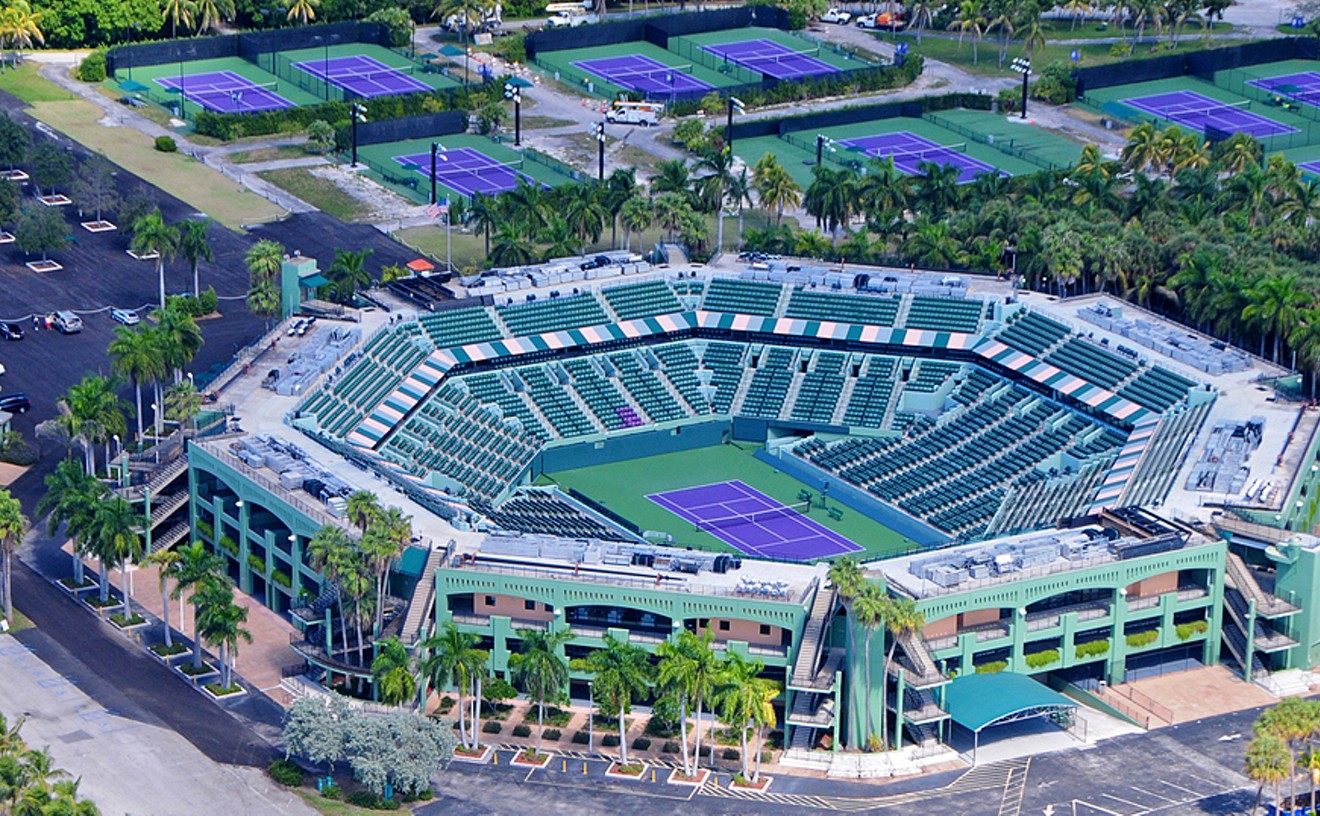 it's been a minute since the Miami Open packed up its tournament and moved to Hard Rock Stadium, but the tennis courts on Key Biscayne where Jimmy Connors, Serena Williams, Andre Agassi, and Chris Evert once served and volleyed are still standing and are open to the public. The Crandon Park Tennis Center has 27 tennis courts available for use to anyone with a racquet. And it's affordable, too: $5 per player for hard, $7 for clay. Thirteen of the courts are equipped with night lighting for a $2-an-hour upcharge. Beyond the quality of courts and the history of the site, the tennis center boasts a beautiful setting, nestled among coconut palms, with the occasional iguana speeding by. If you insist upon making like a pro, you can play on the stadium court ($18 an hour per player).

With lush mangroves, water hazards aplenty and pops of palms throughout, Crandon Golf at Key Biscayne is what Miami golf dreams are made of. This year the par-72 bayside course officially celebrates its 50th birthday. And five decades in, it remains on top of its game, from its mammoth par-five first hole to the dogleg right over water that awaits on the iconic seventh to an 18th that features water, water, everywhere but straight ahead. There are a couple of things any emerging or seasoned golfer should bring with them for a round at Key Biscayne: ample supplies of both self-confidence and spare balls. The course's finest feature might be its egalitarian nature: It's owned by Miami-Dade County and open to the public. You can buy a membership and save a bundle on each round, but locals who golf only occasionally catch a break on greens fees too. 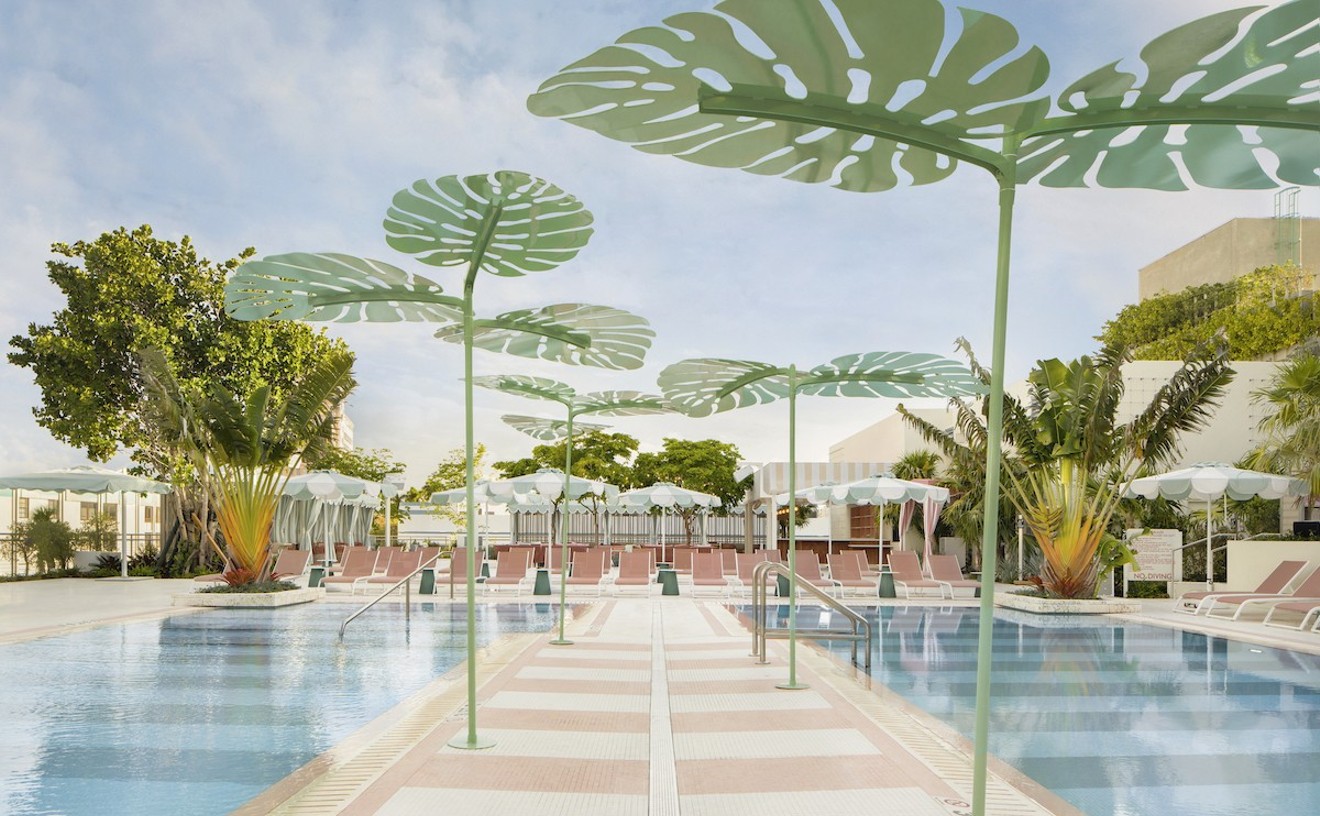 Since its 2021 grand-opening spectacle with Kim Kardashian, David Beckham, and A-listers galore, Strawberry Moon has kept the momentum going as the buzziest pool in town. Good vibes abound in the 30,000 square foot space on the third-floor deck of the Goodtime Hotel, the well-publicized partnership between club mogul David Grutman and entertainer extraordinaire Pharrell Williams. The little details add up to a memorable day in the sun, with pinstripe awnings, pastel tiling, and scalloped bar seating among the art deco touches. On weekends, the pool evolves into a turnt club landscape with a rotation of DJs – DJ Purple, DJ Don Hot, and Ariel Assault, among others — delivering the beats. the cocktails can be as colorful as the pool's frolickers, which helps to make Strawberry Moon the best splash around. 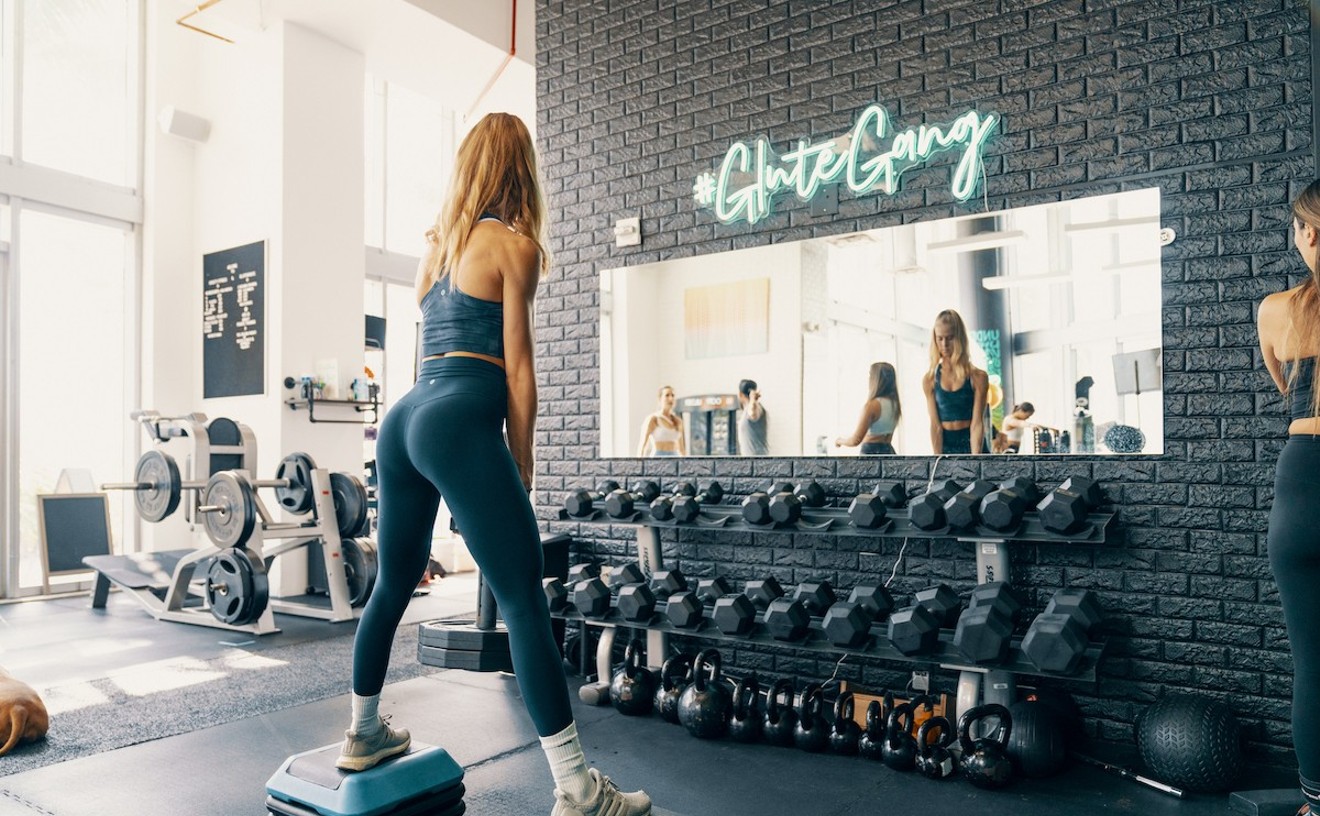 Miami loves a good booty. And whether that rump requires a daily regimen or just needs a one-day boost, GluteHouse in Brickell is the destination. It's a gym like no other for a city like no other, complete with state-of-the-art equipment. Workouts come in the form of a circuit-style strength training program. They last 50 minutes and are guided by an app and a floor coach. Memberships start at $99 per cycle, encompassing two workouts per week for four weeks. Sure, it can be intense, but the Miami River views make your butt-tastic workout that much better. For home gym-ers, there's the GluteHouse On-The-Go online training program. And this fall, GluteHouse plans to expand its space to more than 3,500 square feet and add new equipment and membership elements. Get your ass moving already!