The Wynwood restaurant Alter is known for serving some of Miami's most innovative meals, so when chef Brad Kilgore decided to open a patio lounge, he knew his drinks had to be as interesting and visually stunning as his food. Enter Gustavo Martinez, the creative force behind Bar Alter. The bartender takes a culinary approach to cocktail preparation, using Alter's kitchen as a starting point to make infusions and potions. Martinez, usually found behind the bar, might suggest a drink that sounds unfamiliar. Maybe it will be a libation made with grappa, amaro, tangerine shrub, black lava salt, and smoke. In this barkeep's hands, the unfamiliar combination is transformed into the gorgeous and savory La Familia. Of course, you could always go with a classic martini or old-fashioned, but why not let Martinez assess your preferences and make a bespoke cocktail for you? For around $14 a drink, this might be Wynwood's best investment in a work of art. Bar Alter is open Tuesday through Saturday from 5 p.m. to 1 a.m. and is closed Monday. 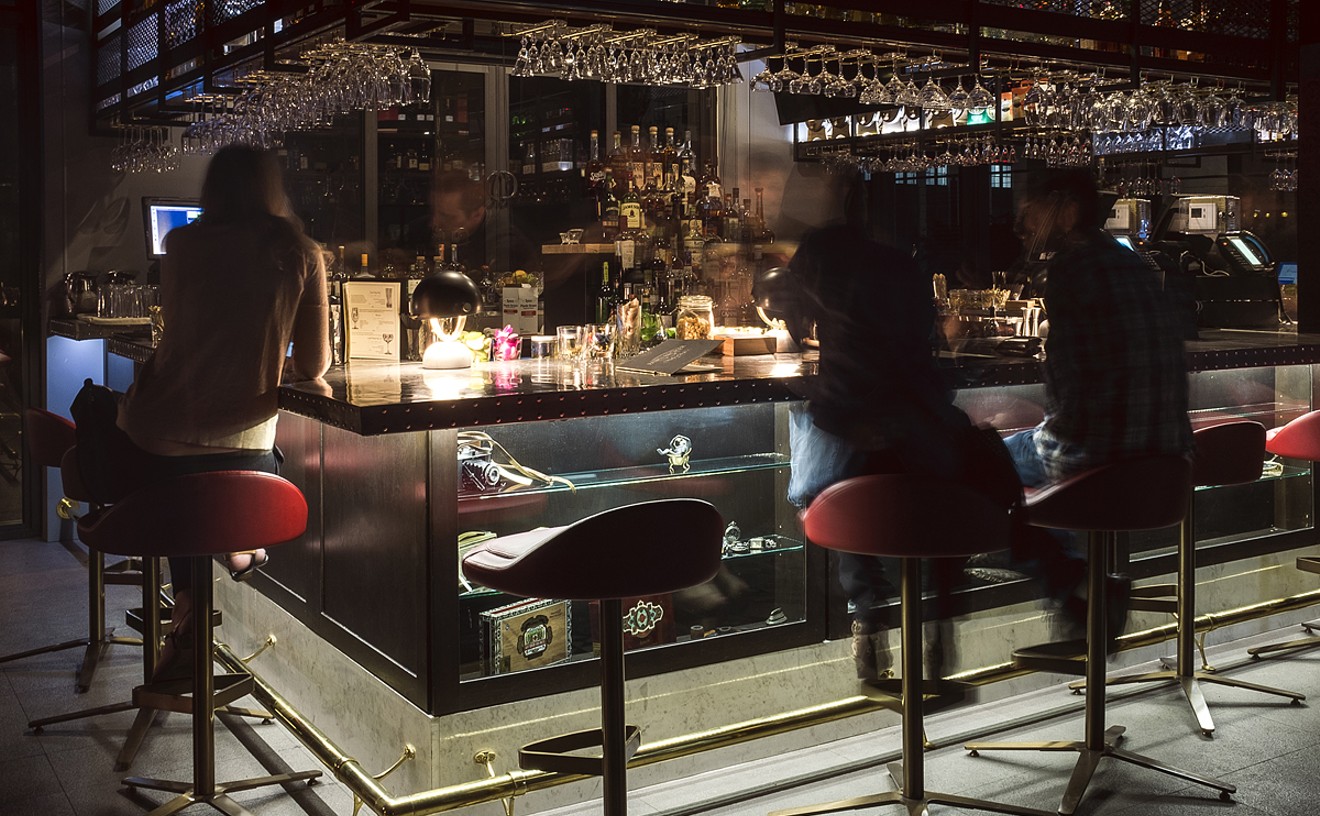 For some reason, rooftops and cocktails make a winning combination. There's nothing more romantic that a drink with a view. Downtown Miami's Pawn Broker has it all: a gorgeous vista, plenty of seating areas, and classic black-and-white movies projected onto a neighboring building. Add that Pawn Broker has an impeccable pedigree as part of the Pubbelly Restaurant Group and you have a winner. The drinks are both classic and original. The showstopper is the Giggle Water ($16), a Prohibition-era dream of gin, champagne syrup, and lavender bubbles served in a mini bathtub. As you sip, Bogie and Bacall say their final goodbyes on the building across the way as Rick tells Captain Renault: "This is the beginning of a beautiful friendship." It most certainly is. The bar is open Monday through Thursday from 5 p.m. to midnight, Friday and Saturday from 5 p.m. to 2 a.m., and Sunday from 4 to 10 p.m. 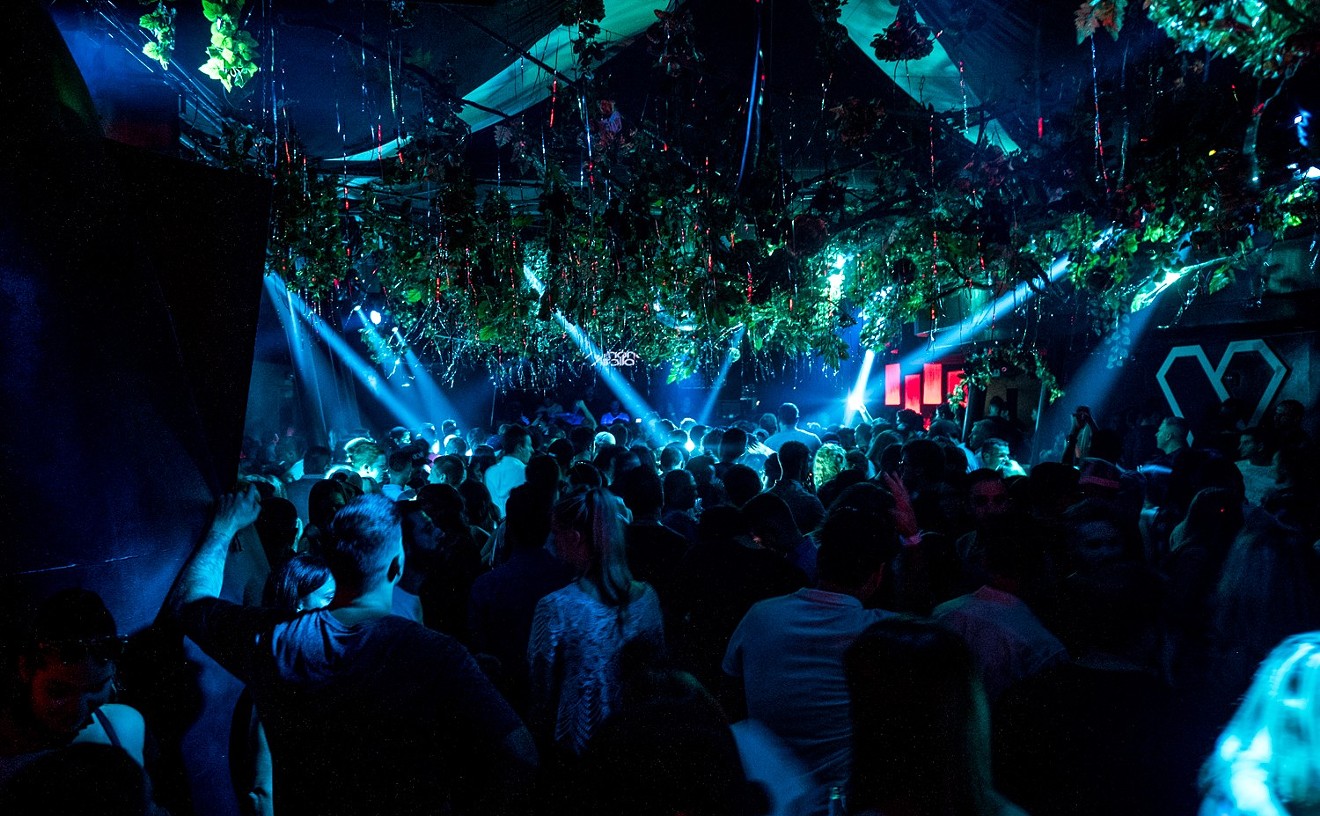 Spain's party culture is full of dancing and drinking. Gatherings begin late in the evening and continue after dawn and sometimes through the next night. But you don't have to go to Ibiza or Barcelona to enjoy parties that last a whole weekend. Just head to downtown Miami's Heart Nightclub. It's open every week Friday night through Sunday afternoon, but exactly when it shuts down depends entirely upon the energy inside. The three-level venue consistently books some of the best underground house and techno DJs in the world. The Miami crowd showers them in so much love that they've been known to play for six, eight, or 12 hours. The third-floor terrace allows the sun to peek through, offering dancers rejuvenation in the soft glow of morning. It's a total FOMO factory, so just catch on already and stop missing out.

If you're looking for something authentic, Club Tipico Dominicano in Allapattah should become your new go-to spot. This is a solid Dominican restaurant, a vibrant bar, and a festive nightclub. The menu is filled with well-made choices, from mangú (a plantain dish) to mondongo (a tripe soup). After 10 p.m., the restaurant switches gears to prepare for huge parties, which feature a team of DJs and/or a live band that will instantaneously instill patrons with the power to dance nonstop until the crack of dawn. By 2 a.m. on weekends, the venue is filled to capacity with Latin-music lovers from all over the Caribbean and South America. They perfect their three-step bops and inadvertently challenge others to dance-offs of epic proportions. Over the years, Club Tipico has featured a slew of fine artists, such as El Rey del Mambo Omega, as well as special events hosted by 106.7 El Zol's on-air talent, including La Gatita. If there's one thing that's guaranteed about the club, it's the long-standing Sunday-night extravaganzas that feature special guests, bottle and hookah specials, and a squad of DJs that keeps the night going well into the early hours of Monday. 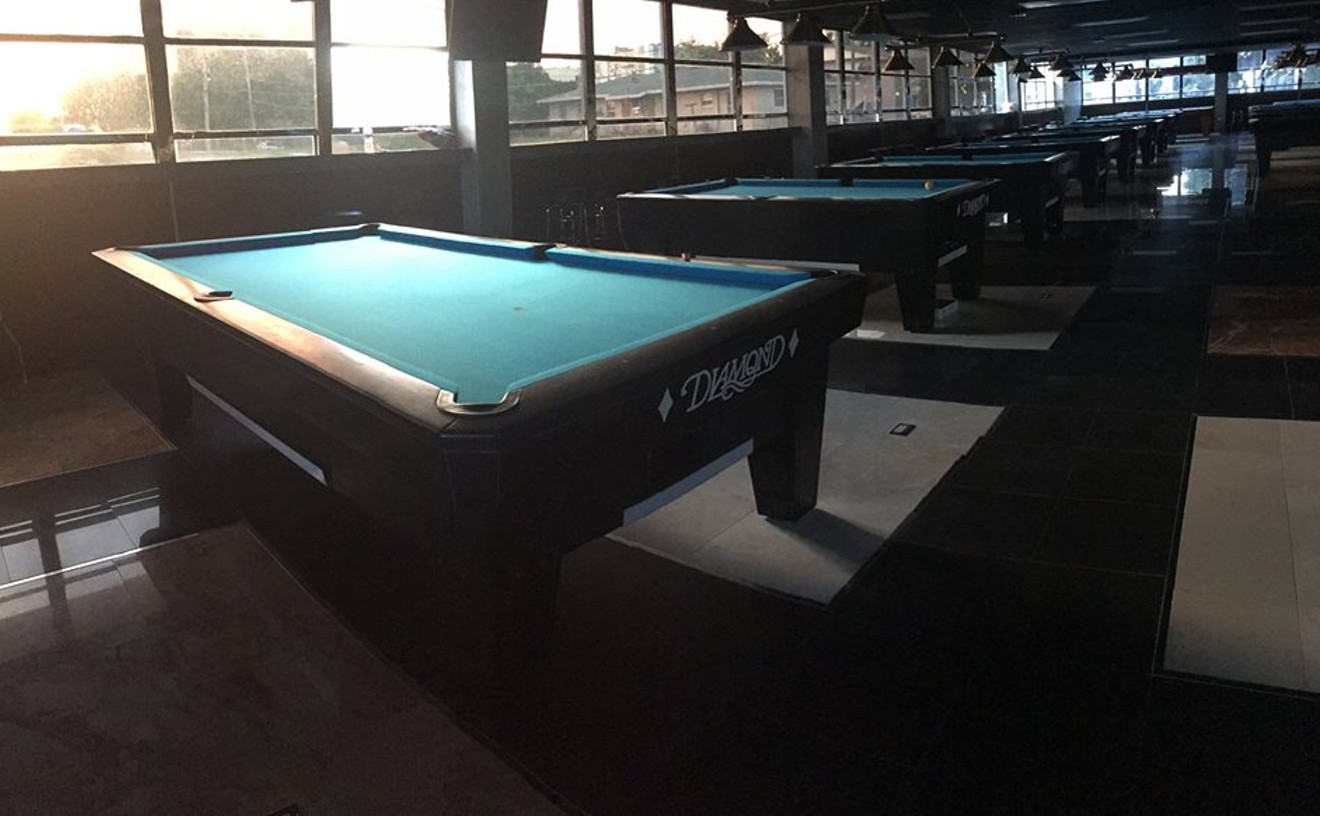 K&K Billiard & Sports Bar loves the sweet pastime of pool. With 15 tables including four nine-footers and 11 seven-footers, there's never a long wait for a game. And if it's crowded, the tables are spaced far enough apart that you don't have to worry about someone else's cue ramming an inappropriate spot of your body. Open Monday through Thursday from 4 p.m. to 2 a.m., Friday and Saturday from 4 p.m. to 3 a.m., and Sunday from 4 p.m. to 1 a.m., K&K offers tables for $12 per hour, but the underemployed can take advantage of weekdays, when you can rent a table for only $5 an hour from 4 to 7:30 p.m. Though there's no liquor served, there's an extensive beer menu, and the smoke-free environment makes it a great place to take the young pool hustler trying to learn his or her way around the table. 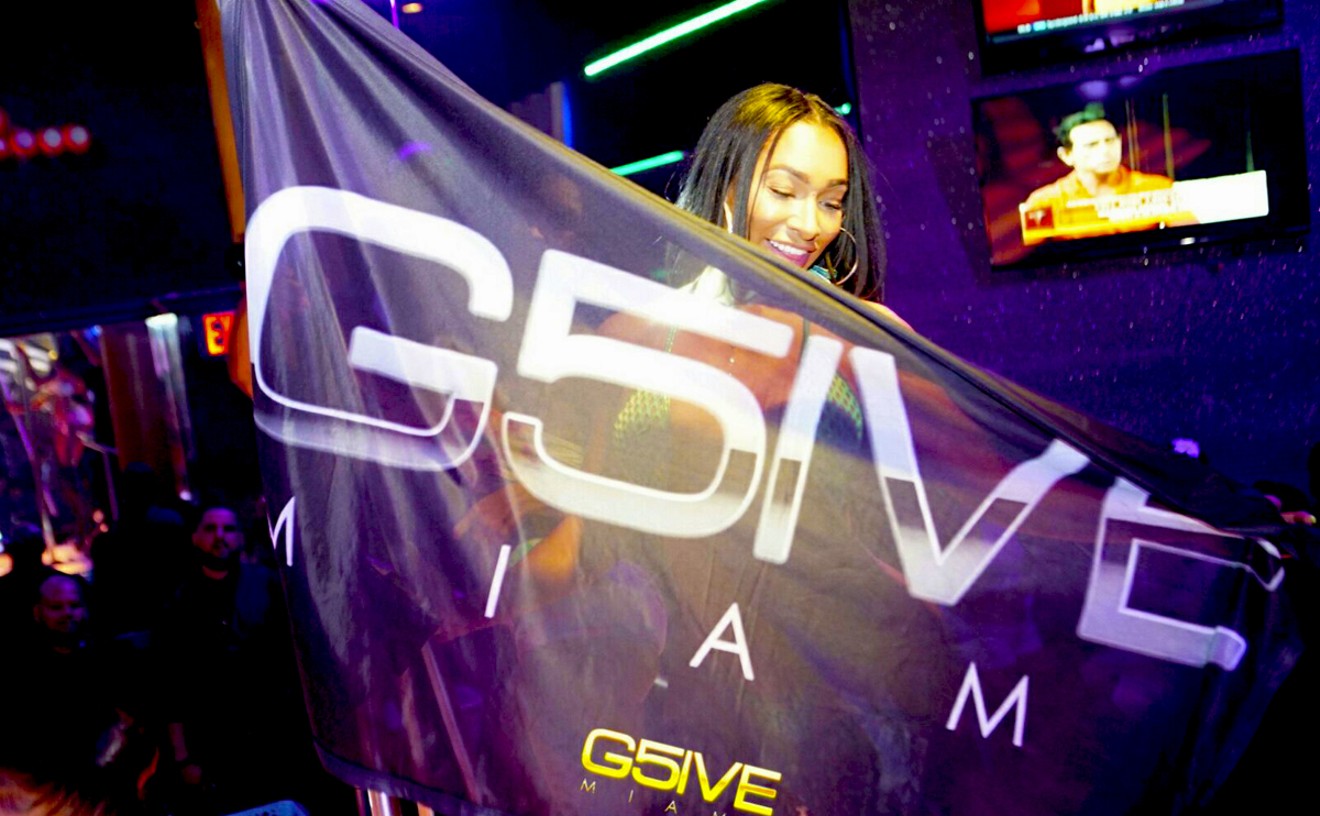 Strip club culture in Miami hasn't been the same since Puppy Management CEO James Wright and GM Damion McKenzie took over G5ive Miami in 2014. The North Miami Beach venue has long served the community as a popular billiards and comedy club by day and a popping strip club by night. Within the past three years, G5ive has gained plenty of notoriety for its army of more than 100 talented dancers and servers who entice customers from all over South Florida. There are events and specials every night of the week, such as $2 Tuesdays, WCW Wednesdays, and Trendsetter Thursdays. Turn up for your birthday or celebrate dumping your significant other on Fetty Fridays; then experience a topnotch rapper or a model on Celebrity Saturdays. The booth is helmed by pros including DJ Meat, DJ Lucky C, and the 305's DJ Nasty. G5ive has also become a mecca for comedians and out-of-town artists. Philly rapper PnB Rock, Atlanta trio Migos, Harlem native Jim Jones, Rick Ross, Future, Red Café, Tory Lanez, Cardi B, David Guetta, and plenty of other well-known names have turned up, including R&B artist Mya, who one night sang and performed a few dance moves of her own. And don't forget about the strippers, including Essence Monroe, Chyna, and Miami Tip. 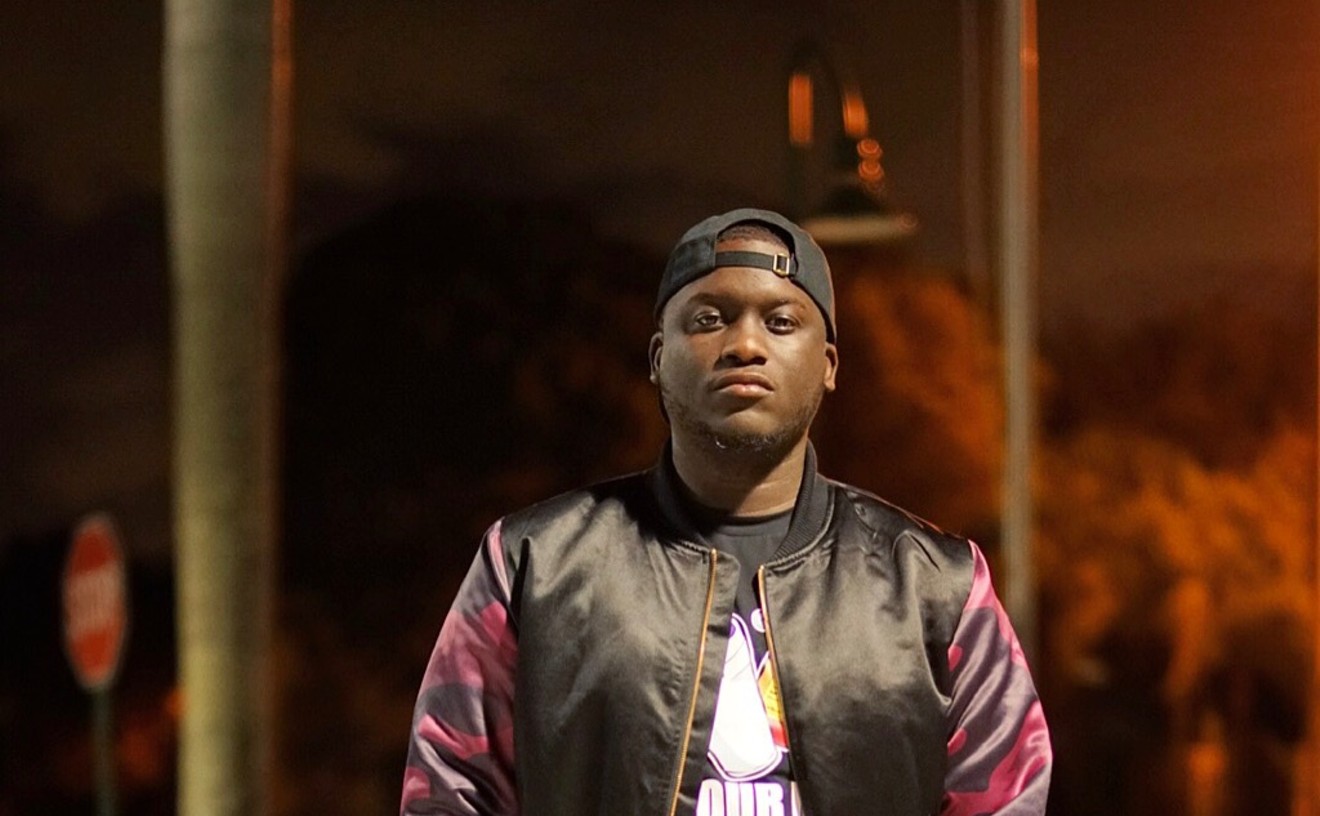 There's a laundry list of Florida rappers who've had their 15 minutes of fame in the past year. But only one Miami MC has shown a positive, uplifting spirit and guaranteed longevity. Zoey Dollaz makes headlines with every record he drops and maintains a passion for serving the community. This past year was pivotal in the Haitian rapper's career. The North Miami native's life took a successful turn after he signed to Future's Freebandz label via Epic Records while live on the air at 99 Jamz. In the past year alone, Zoey Dollaz has made a lasting impression on listeners, releasing the debut album Port-Au-Prince and his most recent mixtape, October. He has made his city proud by representing the 305 at every major concert he crashed in 2016. He was there for Beyoncé's Miami stop on the Formation World Tour and the infamous Summer Sixteen Tour alongside Drake and Future. He has set microphones on fire with slick freestyles at every major radio station, from Hot 97 in New York City to Power 106 in Los Angeles. When he's not clinking glasses of champagne with Jay Z and DJ Khaled or jumping on couches in the VIP section of high-end clubs, Zoey is assisting the community in Miami and doing what he can to help his people in Haiti. During Art Basel, the "Bad Tings" rapper took part in Finessing IV the People, which helped raised funds for the Haitian victims of Hurricane Matthew and for Sow a Seed, a nonprofit that works with orphanages in the Caribbean. While other local artists mumble redundant lyrics over tired beats and sort out multiple legal woes, Zoey stays true to his respectable and clean image while dropping hit after hit about the struggles he endured growing up on the streets of Haiti and Miami. 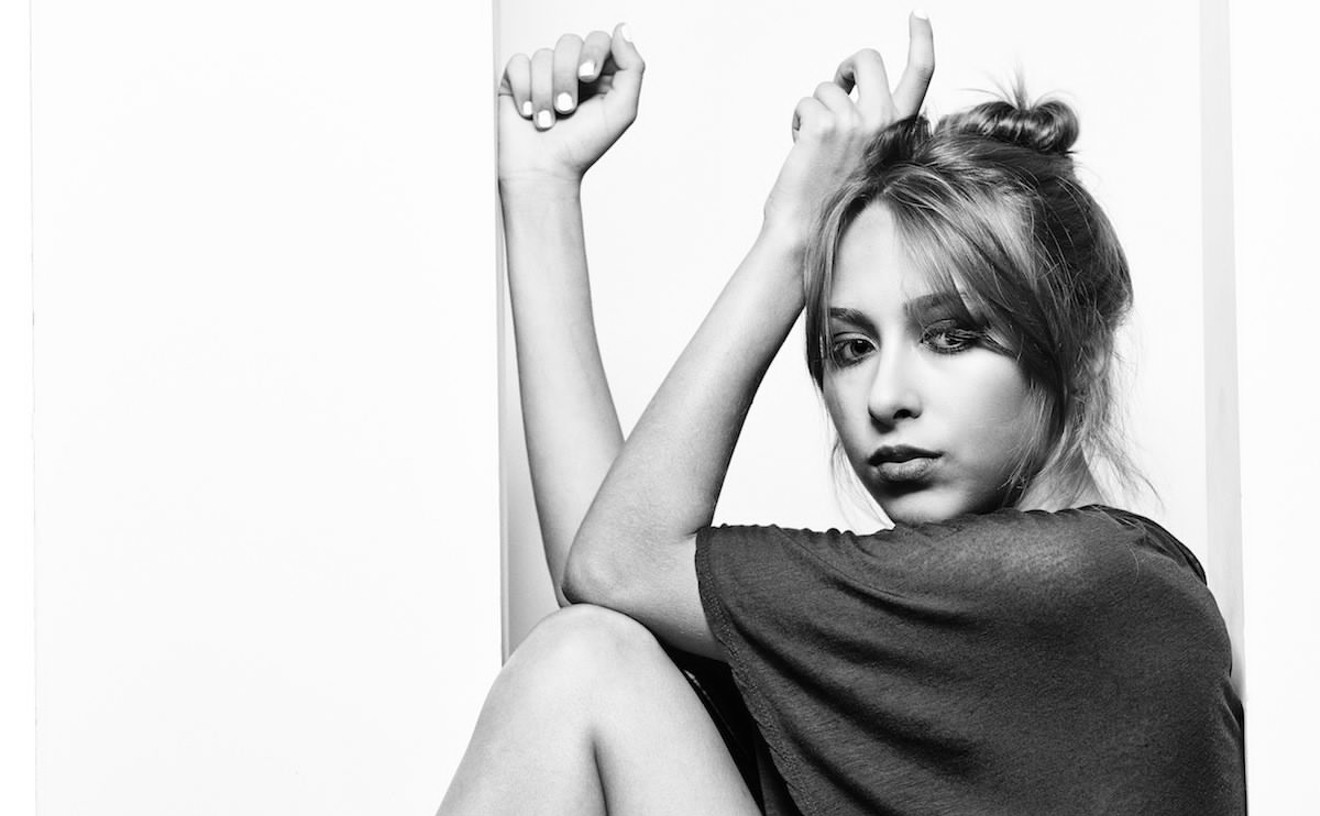 Rising R&B artist Brika would fit in neatly with acts such as Thievery Corporation and Zero 7. She has been profiled and revered by tastemakers such as Billboard and BBC Radio 1. Brika says Billie Holiday is her greatest inspiration, but her voice is more like that of Amy Winehouse or Banks. Her singing has a smoky, jazzy quality made for dark lounges and the space between lovers occupied only by candlelight and anticipation. Only a few short years ago, she was intimidated by singing in front of her high-school peers, but Brika now commands a room like a seasoned pro. For example, during her recent residency at Seaspice, the slender but powerful vocalist displayed a stage presence well beyond her years. Charming, funny, and witty throughout each of her performances, Brika worked the room like a standup comic, a Las Vegas magician, and a headlining soul siren rolled into one. Although the music is entrancing on its own, Brika has a personality as big and engaging as her voice. At only 22 years old, she has only just begun her career, but thanks to her well-received debut album, Voice Memos, and national recognition for her singles "Expectations,""Mumbai," and "I Don't Want Your Love," the future looks bright for this late-night songbird. 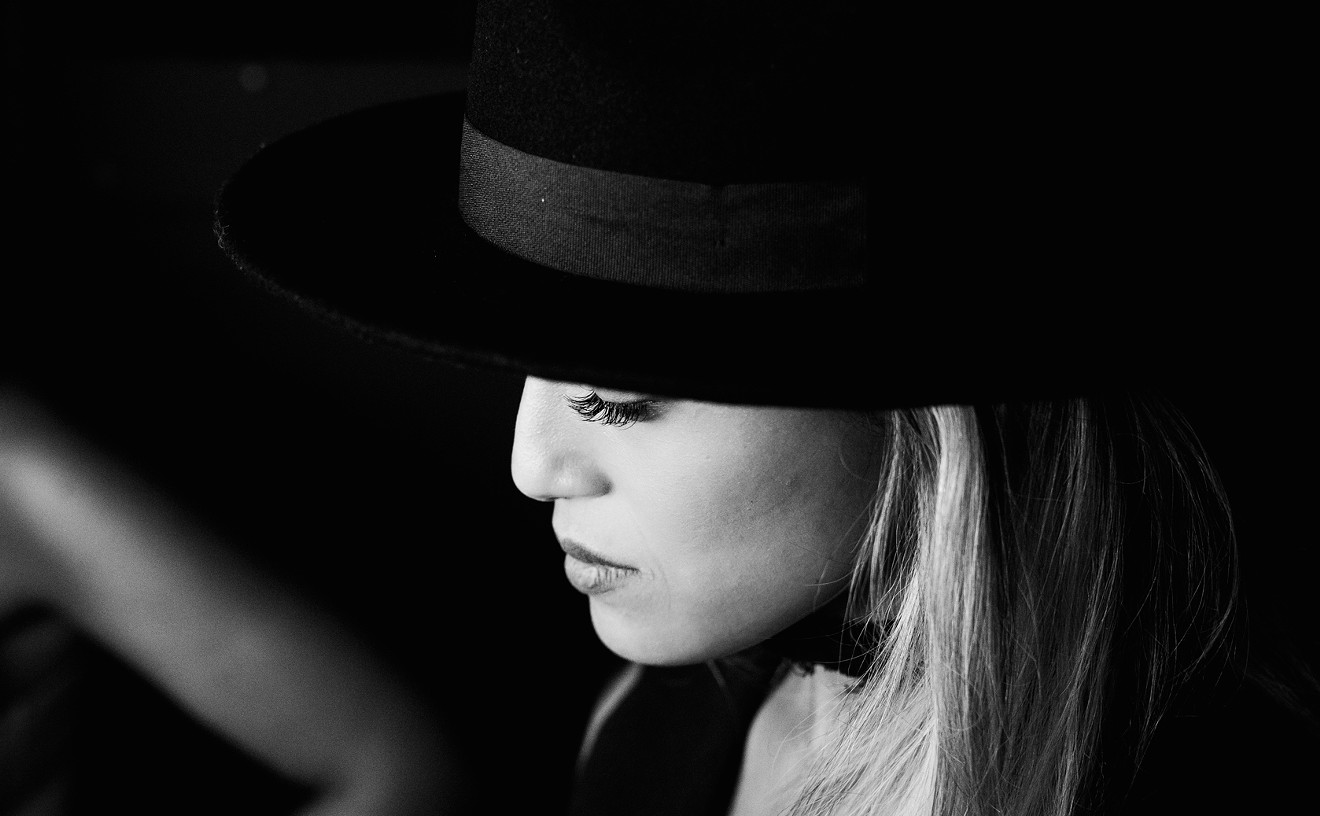 Great DJs in this city, believe it or not, are rare. Sure, a lot of partiers are content to dance and sing along to the Chainsmokers' "Closer" for the millionth time, but a great DJ can give you a collegiate-level lecture on commanding a room, all without the obnoxious Top 40 hits to keep crowds entertained. If you're looking for a jukebox, Miami has plenty of those, but if you want to be rewarded, check out Ms. Mada. As part of Link Miami Rebels, Mada (real name Rachel Tumada) enjoys residencies Fridays at Trade (1439 Washington Ave., Miami Beach) and Saturdays at Space (34 NE 11th St., Miami), where she has opened up for a who's who of the underground dance music scene, including Lee Foss, Claptone, Green Velvet, Jamie Jones, and Richie Hawtin. Having been at it since 2010, Mada has spun at venues such as Electric Pickle, Treehouse, and Story and made appearances at Ultra Music Festival and III Points. Even with that impressive resumé, Ms. Mada continues to fly under the radar of most Miami clubgoers. Locos por Juana has been a leader in Miami's music scene for more than 15 years. A staple and indeed a standard for what the Magic City and its diverse population can produce, Locos por Juana delivers a sound that surfs from one Caribbean island to the next, with trips into South America and the bandmates' native Colombia. Led by the trio of vocalist Itawe Correa, guitarist Mark Kondrat, and drummer Javier "Lakambra" Delgado, Locos por Juana is more a collective than a band. Dozens of musicians have floated in and out of the lineup over the years in a system that has helped to create rich live performances. Combining cumbia, dub, funk, hip-hop, reggae, rock, salsa, and essentially any musical style that gets people grooving and vibing, the veteran outfit is everything to everyone at any given time. In fact, the group's latest album, 2016's Caribe, even welcomes gringos into the fold through several bilingual tracks and even a couple of English-only songs. It's unfair to pin Locos por Juana down as a Latin rock band. They are a reflection of Miami's effervescent vibrancy and limitless energy. They echo the complex, multifaceted nature of the city.