The best thing about living in Miami is the endless supply of things to do on the weekends. You can lounge on a pristine beach, dive amid neon-hued coral, blast through the Everglades in an airboat, and dance until sunrise at myriad world-class nightclubs. Dave Doebler took one look at the list of those selfish but glorious free-time options and thought, Actually, I would like to spend my Saturdays collecting trash. Doebler runs Volunteer Cleanup, a group that organizes trash pickup operations across Miami Beach. Doebler also chairs the city's Sustainability and Resiliency Committee and has worked to ban polystyrene products from polluting Biscayne Bay. Doebler knows South Florida is an environmental jewel — and unlike the thousands of visitors who vomit garbage on the beach every weekend, he sticks around to take care of it.

In a few short years, the stretch of Miami Beach from 32nd to 36th Street has gone from a rundown tourist trap to a glittering, world-class destination for the top 1 percent of the 1 percent. This is due to the vision of Alan Faena working with an incredible group of collaborators, including his longtime work partner, Ximena Caminos. The Argentine Faena is all id: He wears white exclusively, walks around in hats as large as oil rigs, and spends his free time building gigantic hotels and art houses with his name slapped on the side. He's like the most tasteful sibling Donald Trump never had. (Goldman Sachs CEO Lloyd Blankfein and art-world king Larry Gagosian have already bought property at the Faena House condos, so Faena's Rolodex isn't far off from the Donald's.) And Caminos, the executive director of the nonprofit Faena Art, is in charge of bringing the culture of the district to life by supporting artists through the commissioning of new and time-based exhibitions — from popular to experimental — that are open to the community. In November, Caminos told Vogue she's trying to use the District's spaces, such as the newly built Faena Forum on Indian Creek Drive, to create a "fantastic artists' movement, a new romanticism" in town. We'll take that over a faceless condo complex any day.

Seventeen-year-old Tyrese Cooper, easily one of the fastest teenagers in America and among the fastest people in the world, trains on a homemade dirt track in Miami Gardens. Raised in a cozy house in the throes of Liberty City, the tall and willowy high-school junior has broken nearly every national high-school track record in which he's competed. That's an especially rare feat because most competitive runners stick to a single race. High-school track meets, especially short-distance events, are typically neck-and-neck contests. But two years ago, Cooper caught everyone's attention when the no-name eighth-grader began leaving freshmen and sophomores at least ten meters behind him at the finish line. Now Cooper doesn’t run to win; he runs for time. In the 400-meter, his signature race, the shy teen clocks 45.23, which makes him one of the ten fastest people on Earth. In that event, Cooper is faster than Usain Bolt was at his age. Cooper will likely go pro at the end of the year, and he's a shoo-in to represent the United States at the World Championships in London this August. After that? Medals await at the Tokyo 2020 Olympics. 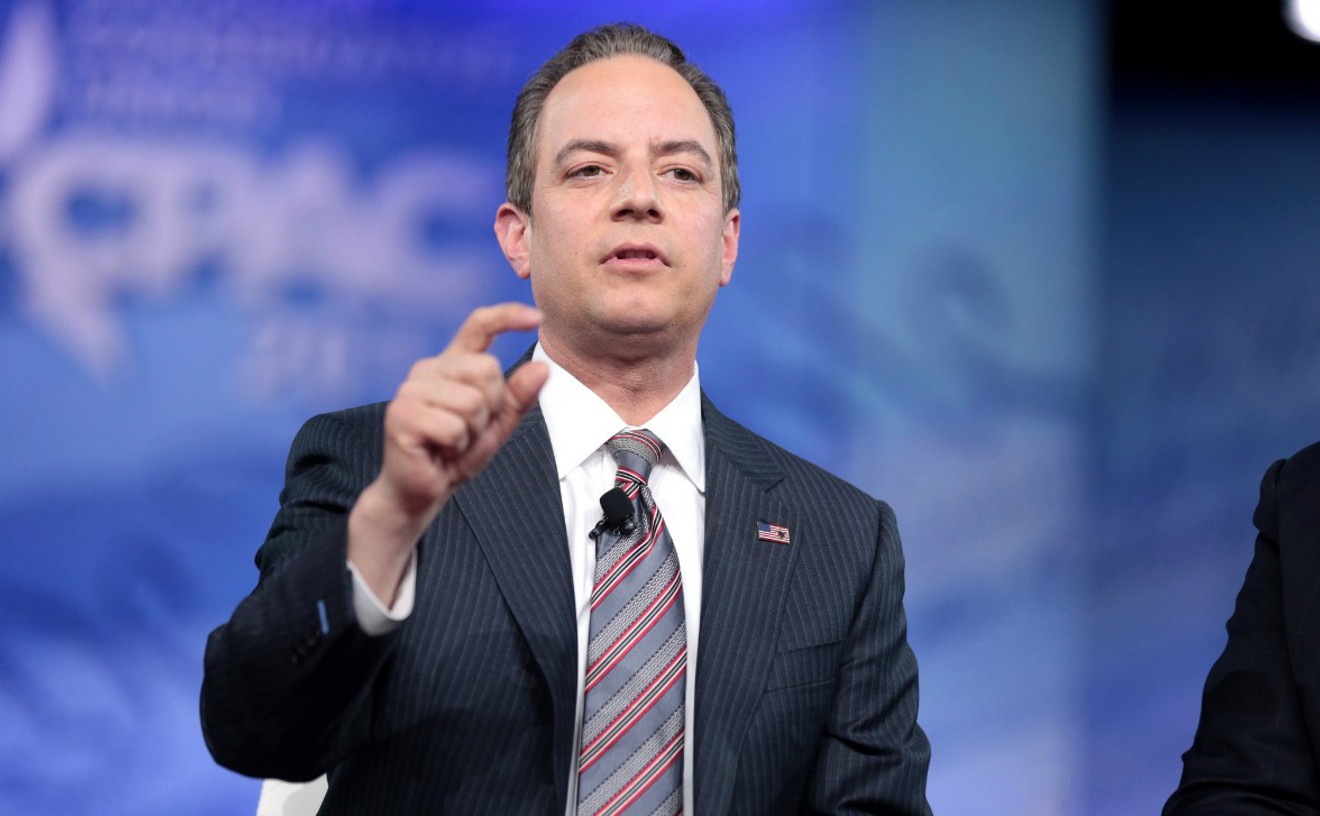 He looks so sincerely happy in the mid-'90s yearbook photos: shirtless and slathered in orange and green paint at an Orange Bowl tailgate, visiting lonely old folks at a retirement home, building a Habitat for Humanity house with his fellow University of Miami law school classmates. Reince Priebus was a brilliant, well-liked student during his three years in Coral Gables before graduating cum laude in 1998. He was elected president of the Student Bar Association, helped edit the Law Review, and even played shortstop on Oral Proposition, their cheekily named softball team. In other words, he's not the kind of kid you'd have expected to help usher fascism into America. Yet there he is today, ever-present in the shadow of Donald Trump. As White House chief of staff, he has overseen the xenophobic Muslim ban, stood behind the Russian-aided election hacking, and silently cheered the catastrophic Trumpcare plan. Where has our old, carefree Reince gone? Someone get Priebus some Canes face paint, stat. 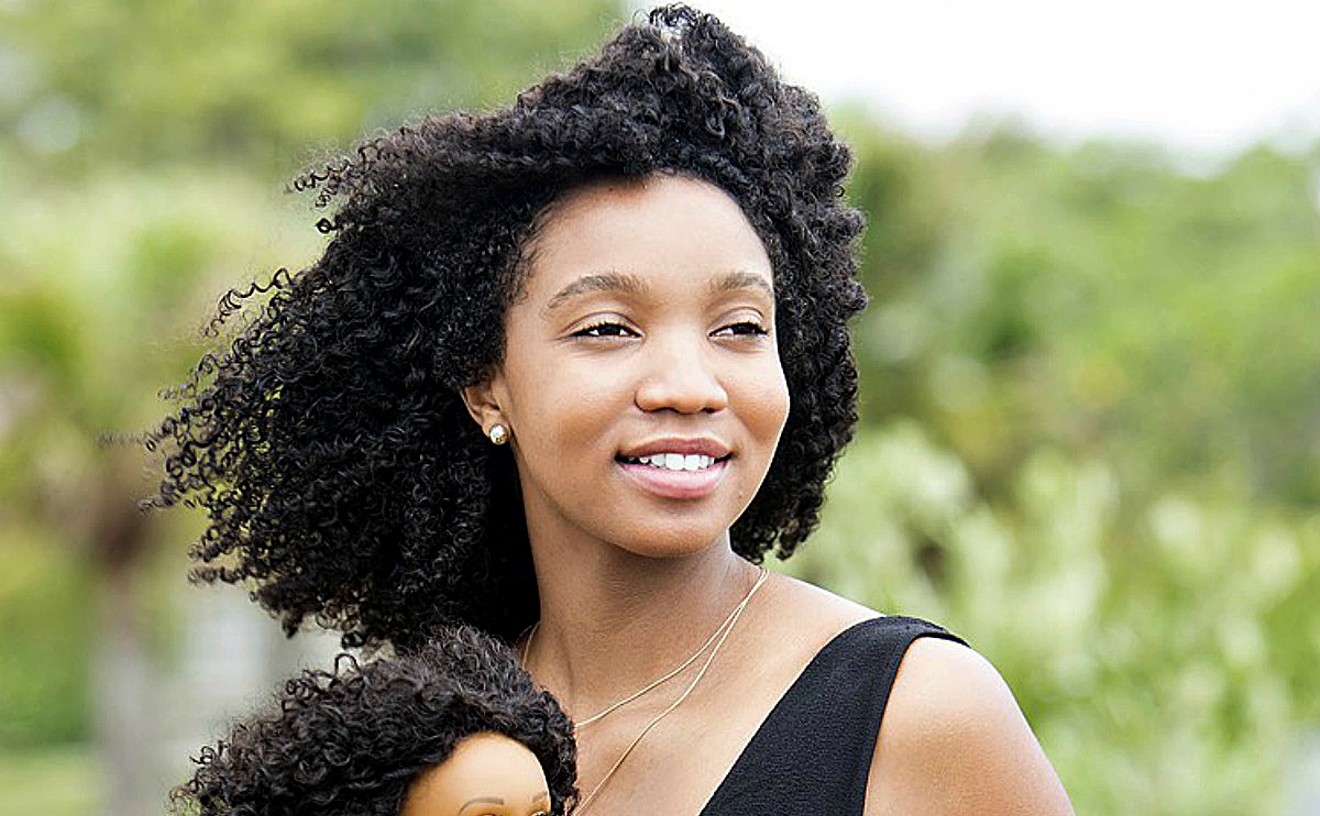 As a child, Angelica Sweeting quickly noticed the dolls she played with didn't look much like her. Sure, some had darker skin like her own, but they also had straight hair, thin noses, and Caucasian features. Those dolls defined her standard of beauty and lowered her self-esteem. Years later, when her own 4-year-old daughter said she wished her hair was long, straight, and blond like Frozen's Elsa, Sweeting tried to find dolls with black features. When she couldn't, the University of Miami business school grad quit her job to solve the problem herself. That was almost three years ago. Since then, Sweeting has unveiled "Angelica": an 18-inch vinyl doll with fuller lips, a wider nose, and black tresses with kinks and curls. After successfully raising funds online and then selling more than 1,600 dolls in less than a year, Sweeting released three other dolls: Another black doll with a darker complexion, a Latina doll, and a biracial doll. In January, Sweeting appeared on Shark Tank, where Daymond John invested $200,000 in Naturally Perfect Dolls. Now she'll be able to mass-produce the dolls and make the toy store less homogenous for the next generation of children. 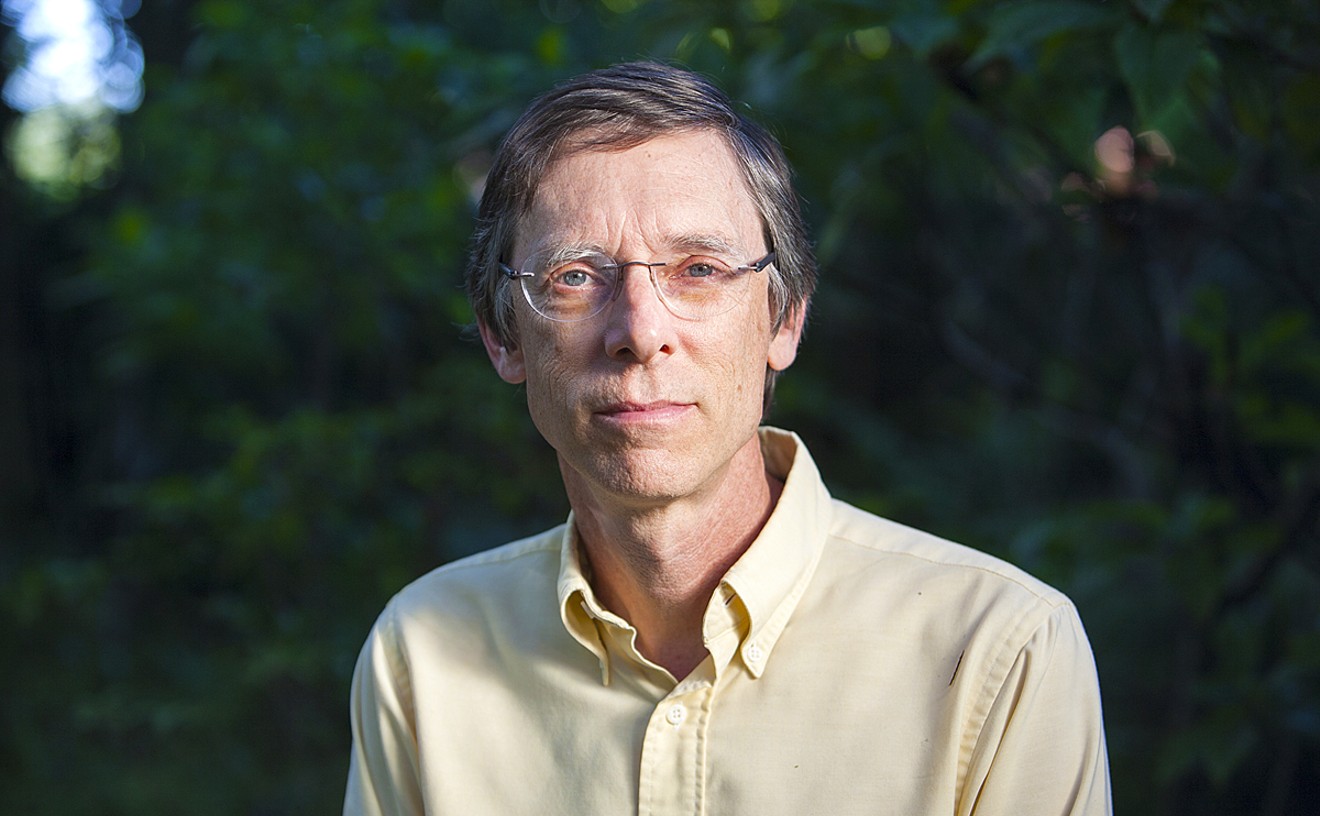 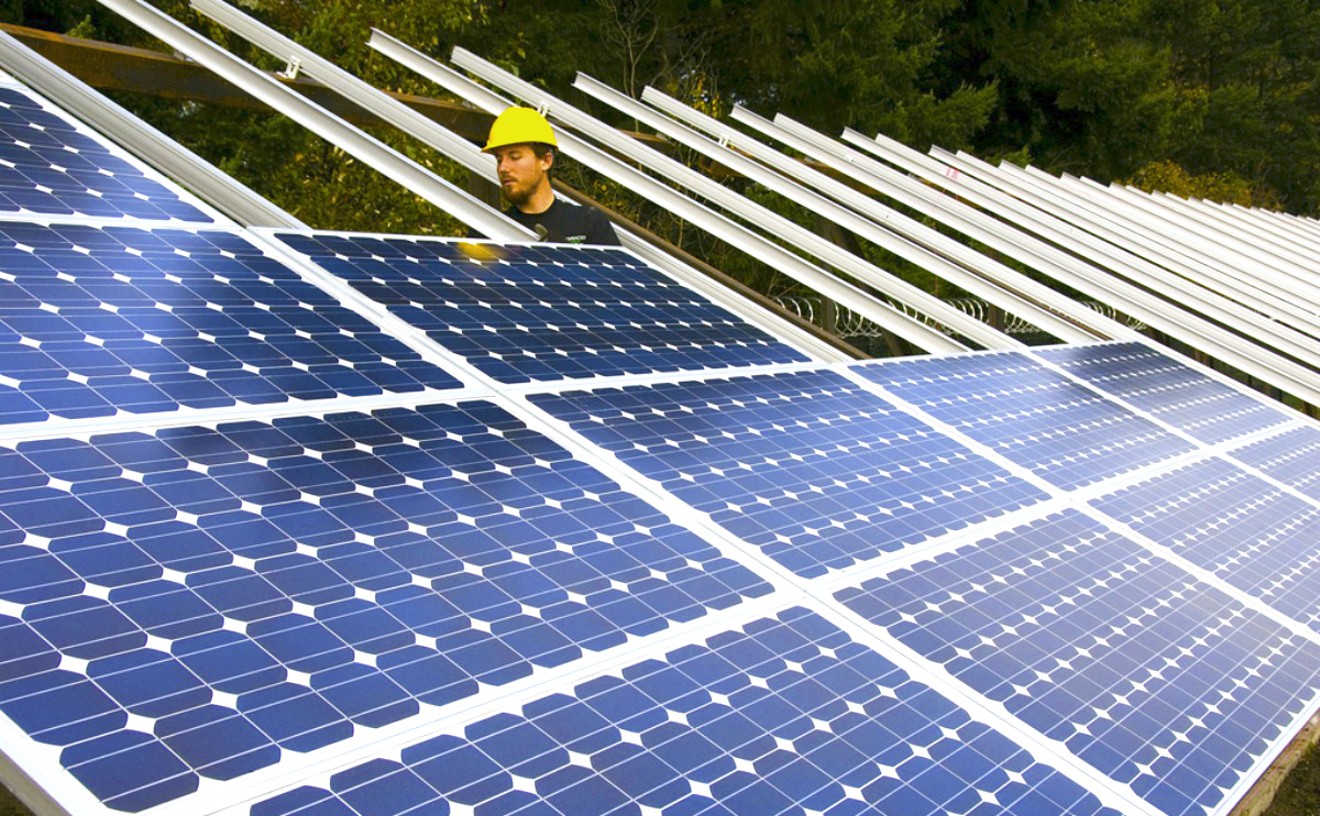 courtesy of Oregon Department of Transportation

Last year, Florida Power & Light had a conundrum. More and more Floridians, increasingly worried about climate change and sea-level rise, wanted freedom to invest in solar power. But the electricity monopoly wanted to keep its profits pouring into nuclear and natural gas. What to do? FPL came up with an ingenious solution: Amendment 1, a sneakily worded law that pretended to boost solar while actually giving FPL more power to crush the budding green energy. FPL sank $8 million into trying to trick voters, but a think tank's president working with the monopoly was caught on tape boasting about their transparent plan to fool Floridians. The amendment was quashed at the ballot box, falling far short of the 60 percent it needed to pass. Sad!

If you've ever wondered what sort of weird garbage a human being would be willing to eat in exchange for $68 million, you can finally add "fake passport" to the list. You can thank two now-convicted human traffickers, Bartolo Hernandez and Julio Estrada, for answering that question. In March, the pair was convicted of smuggling scores of Cuban athletes into Mexico or Haiti on speedboats and then into the States, where the players would join Major League Baseball teams for multimillion-dollar contracts. (The smugglers would get a cut of the players' earnings in exchange for the boat trip across international waters.) As for that passport-eating: Jose Abreu, now a star slugger for the Chicago White Sox, admitted in court that in 2013, as part of Hernandez and Estrada's smuggling pipeline, he traveled from Cuba to Haiti and then to Miami using a fake Haitian passport to meet the deadline for his $68 million MLB deal. He ate the passport on his flight before landing at MIA. He washed it down with a Heineken. 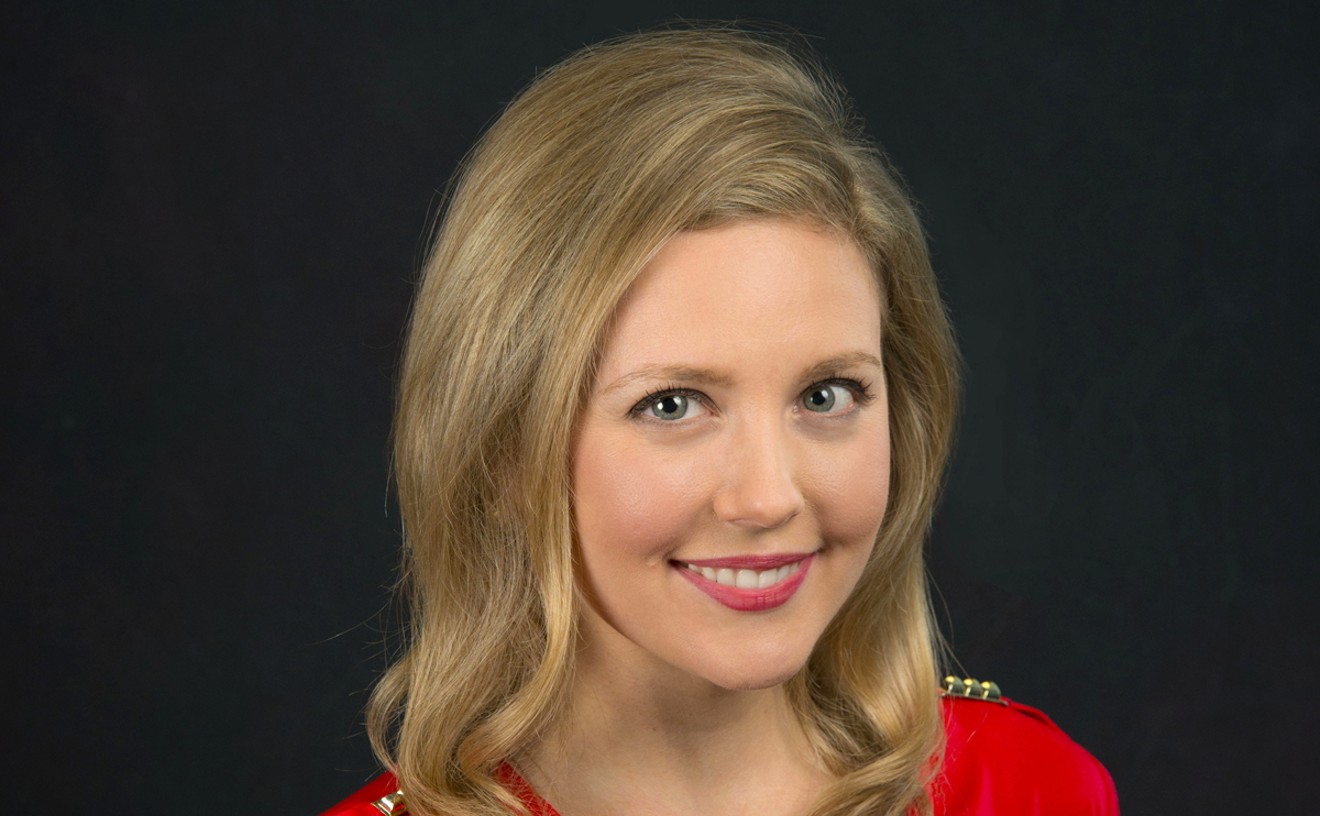 Most government PR reps are paid to spew lies to the public in order to keep citizens afraid and confused. (See: Spicer, Sean.) Melissa Berthier, however, is the rare city spokesperson who's always worth listening to, because she's usually actively trying to stop you from drowning. Berthier, as Miami Beach's communications head, works to educate the public about the very real risks associated with climate change and sea-level rise and to wage an ongoing war against the fake-news industrial complex that tries to deny those problems. When the Daily Caller, a website run by reactionary silk bow tie Tucker Carlson, attempted to claim Miami was actually "sinking" into the ground because developers had built too many skyscrapers, Berthier wasn't having it. She contacted the website's editors to force them to correct their garbage reporting, which had completely misquoted her. Berthier helps run multiple city programs to educate people about the fact that, unless we seriously do something about carbon emissions, Miami Beach will start looking a heck of a lot like Venice in the next hundred years.