There's so much to love about Dirt, not the least of which is that no single item costs more than $16. Such prices are rare in South Beach, especially when you consider Dirt isn't serving just run-of-the-mill fare. Indeed, this fast-casual concept is committed to offering clean food that's locally sourced whenever possible, and best of all — it tastes amazing. That's largely because the restaurant's director for culinary operations is Nicole Votano, a classically trained chef who was the top toque at Fooq's, where she garnered praise for her comforting yet chef-driven cuisine.Dirt has four menus: vegan, vegetarian, gluten-free, and Paleo, but most dishes are built around vegetables and allow for a choice of protein. A favorite is the nourish bowl ($12), starring quinoa, sprouted chickpeas, lentils, roasted curried cauliflower, caramelized onions, roasted red pepper, golden raisins, shaved carrot, mole vinaigrette, and cucumber-mint yogurt. Throw in some orange-basil chicken, and call it a very healthy day. 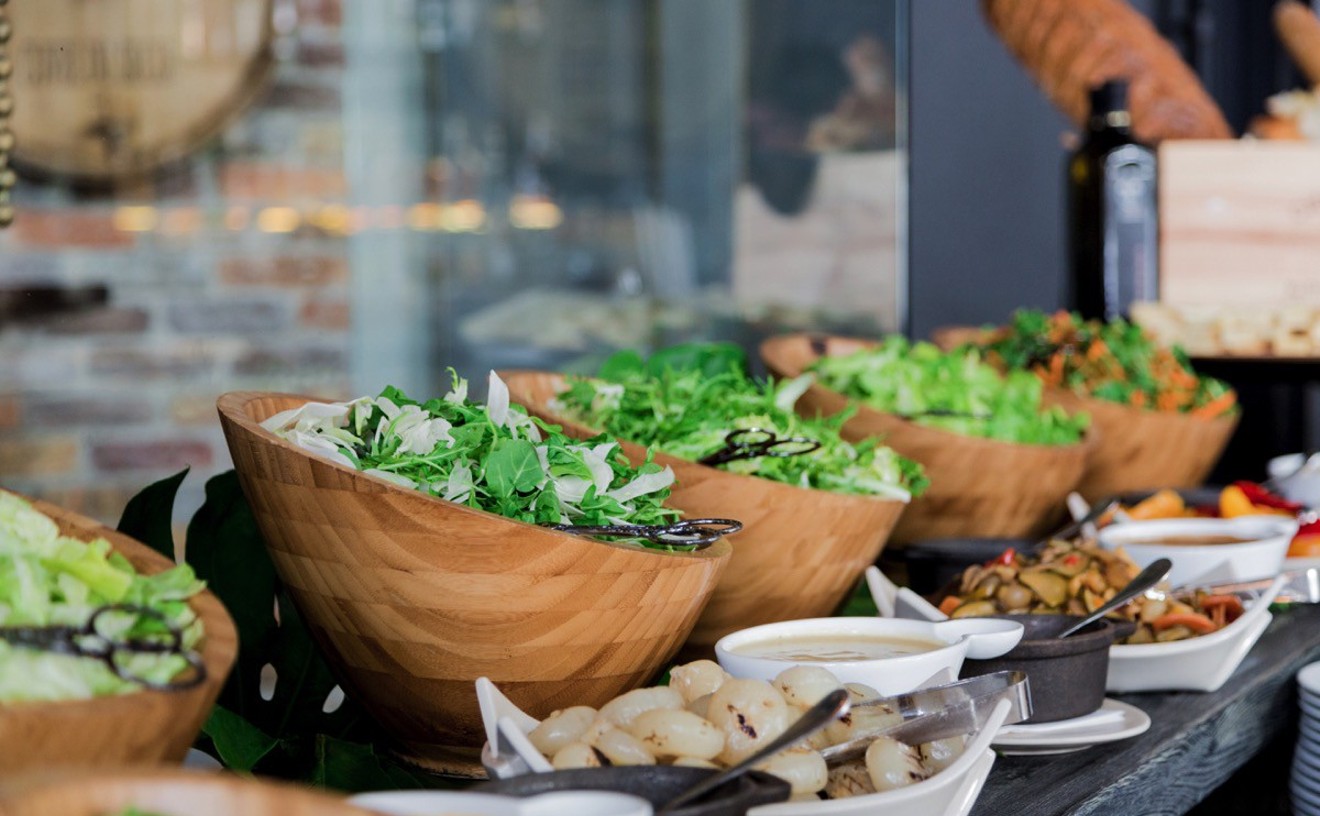 Anytime restaurateur Arjun Waney is involved in a project, the decor is always impeccable. He's the man behind Zuma and Coya, and to open Tamarina, he teamed with husband and wife Tunu and Yona Puri. The upscale coastal Italian restaurant was designed by London-based David d'Almada and includes a beautifully landscaped wraparound terrace with views of Brickell Avenue. The dining room is outfitted with sheer floor-to-ceiling curtains, cinnamon-hued leather wingback chairs, a high ceiling, and a crystal centerpiece stocked with hollow glass decanters and carafes. Elegant dark-wood furnishings are paired with brass accents and antique mirrors to conjure the spirit of Italian glamour. And for emphasis, black-and-white Italian films are displayed on a massive projector. Order tagliatelle with lamb ragu ($23), followed by a grilled or salt-crusted branzino ($45); then sit back and take in the surroundings. Or stop by any Sunday, when there's a $45 all-you-can-eat brunch buffet with a side of live music. 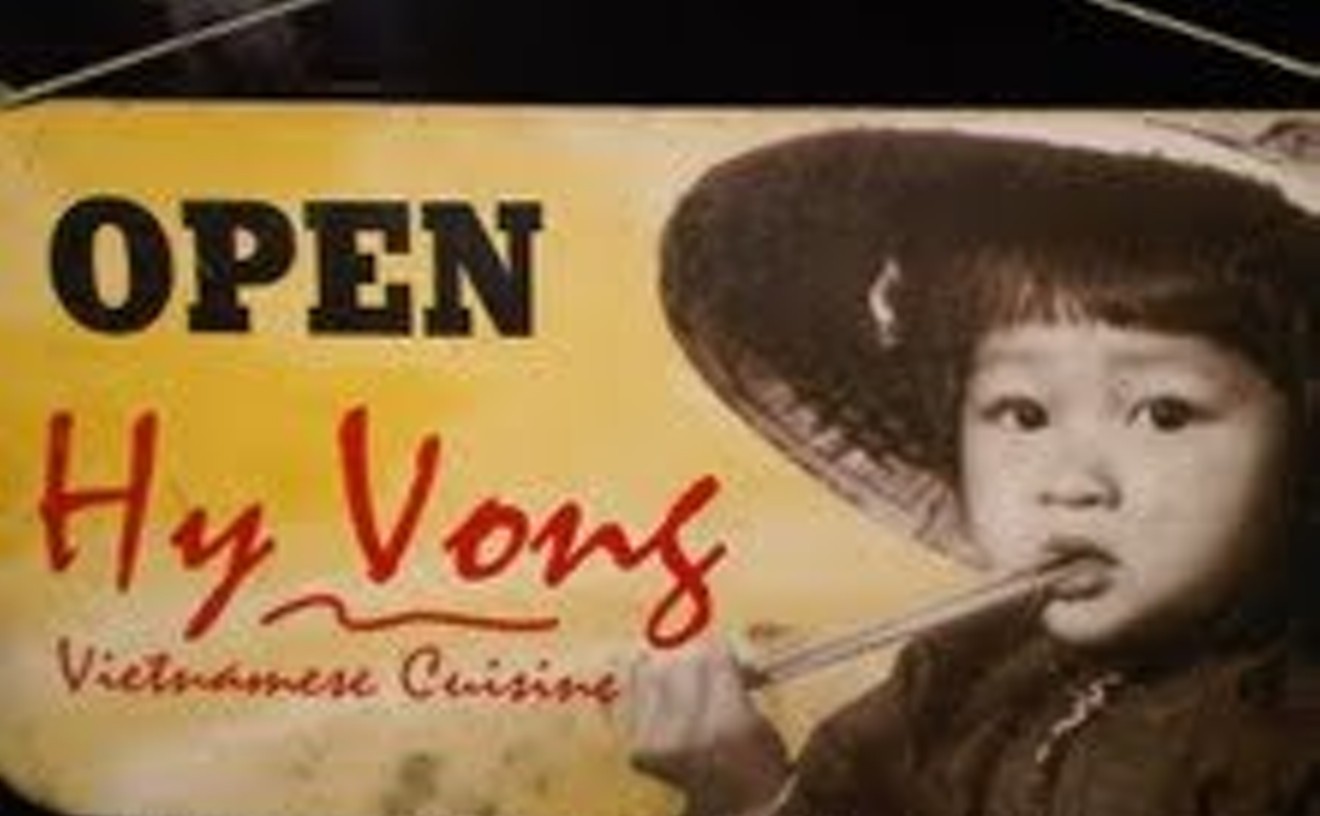 No more pho. No more rolling cakes. No more lemongrass chicken, and no more bun thit. Miami's insatiable real-estate steam roller flattened Little Havana's beloved Hy Vong, but not its owners' spirits. For nearly four decades, Tung Nguyen and partner Kathy Manning ran the quaint, bamboo-lined space, serving intensely flavorful, heartwarming fare that could brighten even the gloomiest day. Nguyen fled war-torn Vietnam in 1975 with little more than family recipes etched into her memory. And for 36 years, the product of her great spirit came flooding out of Hy Vong's humble kitchen spiked with fish sauce. Regulars, after getting their fill of pho, knew to order the squash-and-pumpkin soup layered with flavor and spice. The depth and variety of cooking was what made Hy Vong such a treasure. It is now lost to the ages. 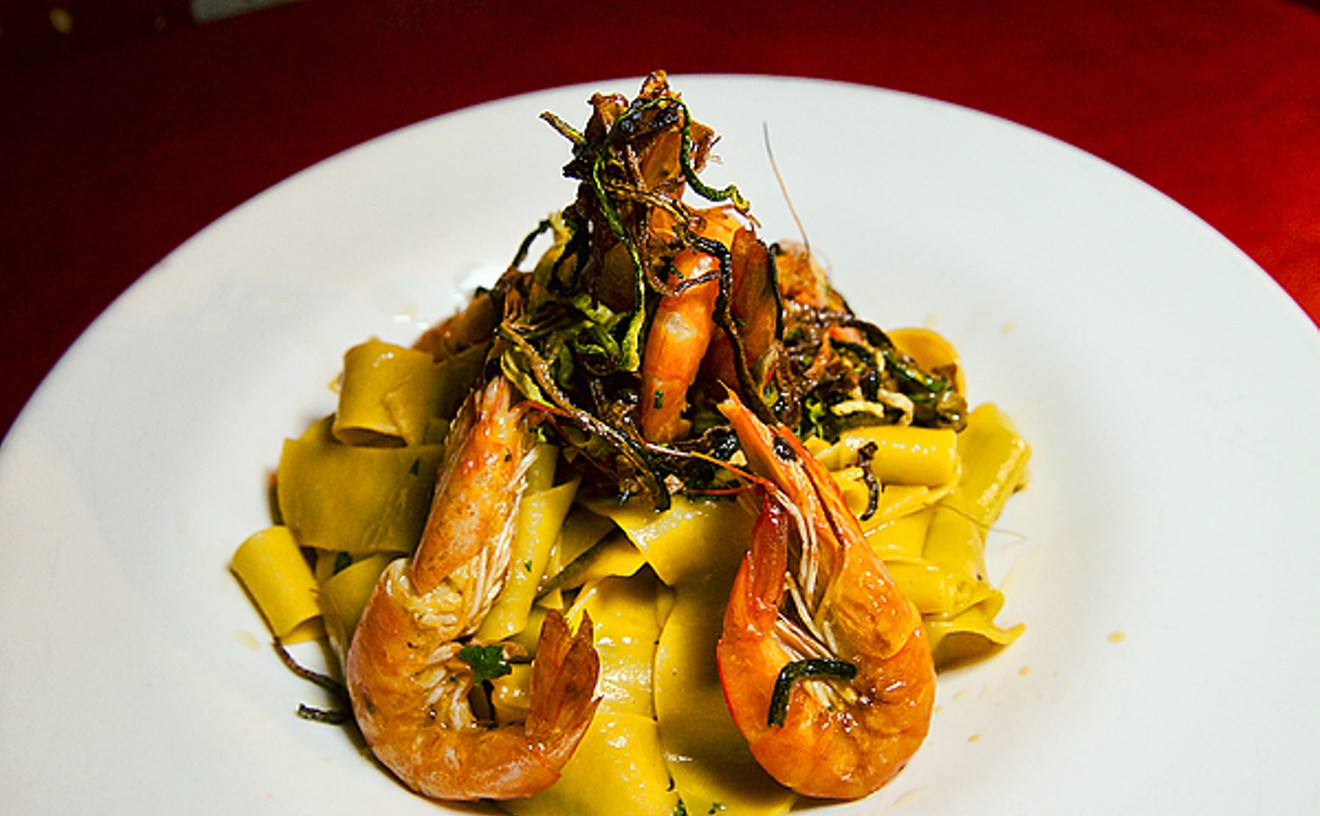 Not only is Soya e Pomodoro a delicious and authentic Italian restaurant, but it also offers one of the most unique dining atmospheres around. Owners Rosario Magrelli and Cristian D'oria left Italy with a Miami culinary career in mind, opening the downtown eatery in 2004. Nestled between two rundown watch repair stores, it's the kind of place where passersby stop to peer in and ask, "What is this?" The narrow interior looks like a combination of a thrift store and a Venetian coffee shop, lit almost entirely by sun that streams in through a floor-to-ceiling window. The open space, adorned with knickknacks and items such as clothes on a laundry line, creates the privacy and serenity of an Italian alleyway. The vintage aesthetic makes this restaurant distinct among Miami's ultra-contemporary buildings. Between the decor and the live music, this place is perfect for everything from a leisurely lunch to a hot date. A meal at Soya e Pomodoro is more than intimate — it's personal, and feels like you're eating in an Italian family's home. The restaurant is open for lunch Monday through Friday from 11:30 a.m. to 4:30 p.m. and serves dinner Wednesday through Saturday from 6 to 11:30 p.m.

This new-age-meets-retro corner diner comes to life at night, catering to the after-hours crowd with all of the deep-fried, over-the-top, indulgent fare Miami craves. Located across the street from Story Nightclub on Collins Avenue, Big Pink has become a South Beach destination that buzzes through the early hours. Thursday through Saturday, the restaurant is open until 5:30 a.m., and clubgoers pack into shiny, old-school plastic booths. The menu is equally exciting and overwhelming, with more than 200 items that include virtually every dish imaginable, ranging from tamer late-night classics such as cheese pizza ($12.95) and patty melts ($14.50) to outrageous signature creations like the mac 'n' cheese waffle sandwich ($12.95) and bacon-wrapped barbecued meatloaf ($16.95). The big portions and big flavors have been attracting rowdy crowds for more than 20 years, and frankly, a meal at Big Pink is a party in itself. 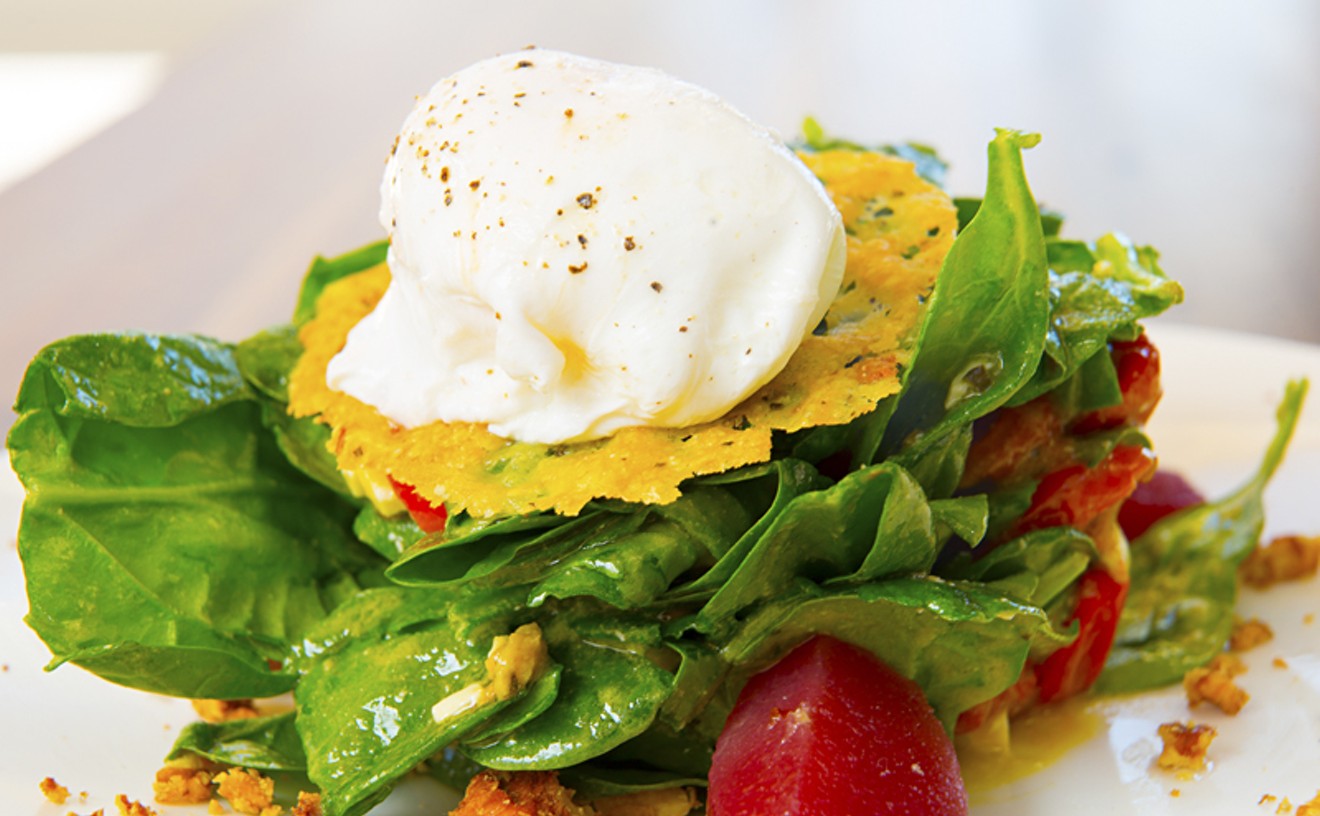 In an area that's dominated by construction and busy offices, Seaspice is an elegant oasis. The extensive menu is globally influenced but seafood-focused, and the atmosphere feels like an upscale island vacation. Right beside the Miami River, guests can dine on plush couches shaded by overhangs in the daytime and surrounded by twinkling lights and candles at night. The indoor areas, including a spacious dining room, are housed in a renovated warehouse that gives an edgy touch of elegance to the nautical theme. The restaurant is inherently romantic and provides the tranquility of outdoor dining away from the crowds at more popular hot spots. The warm breeze off the river makes executive chef Angel Leon's ocean-inspired place even more pleasing and the meal's hefty price tag a little easier to take. Seafood standouts include the Chilean sea bass casserole ($45), presented in a charming cast-iron dish on a bed of thinly sliced Yukons, topped with a pâté-like mixture of truffles and porcini mushrooms. Enjoy waterfront luxury at Seaspice — no yacht required.

Every now and then, it's important to get away. If jumping on a plane doesn't sound realistic, sneak away to Palmeiras instead. This restaurant and beach club is located a quarter-mile off Coconut Grove — and can be reached only by crossing a bridge. What makes this spot so special is its dynamic, Mediterranean-inspired menu paired with sweeping, unobstructed views of Biscayne Bay. The menu, crafted by former Seaspice chef Alfredo Alvarez, highlights Spanish, French, Italian, and Greek influence with dishes such as wahoo crudo drizzled in tangerine vinaigrette, and red wine linguine in truffle oil, a must-try for first-timers here. Prices range from $12 to $32, but plates can easily be shared among two or three patrons. The restaurant offers indoor and outdoor seating, both with picturesque views in the most peaceful atmosphere. After your meal, take advantage of the resort's amenities to justify the restaurant's prices.

Bianca at the Delano

Lavish decor, low lights, and romantic Italian cuisine. The Delano's resident restaurant, Bianca, gives diners a break from South Beach craziness for an evening of luxury and flavor. Chef de cuisine Jason Bamford, who joined the restaurant more than a year ago, has developed a menu featuring simple yet innovative plates with bits of sexy and savory along the way. Menu items include steak tartare ($24) with lavender and bone marrow, bigeye tuna pizza ($26) showered in a light truffle oil, branzino ($44) served with roasted potato and herb salad, and a variety of pastas ($25 to $45), including a risotto of the day, a unique creation crafted by Bamford. Plan to dine slowly to take advantage of the eatery's seductive and swank atmosphere, and pair dinner dishes with wine and cocktail selections presented on an in-house iPad. The restaurant offers a Sunday-brunch soiree too, adding a Mediterranean and boozy flair to the age-old meal with a buffet, drink selections, and a DJ. 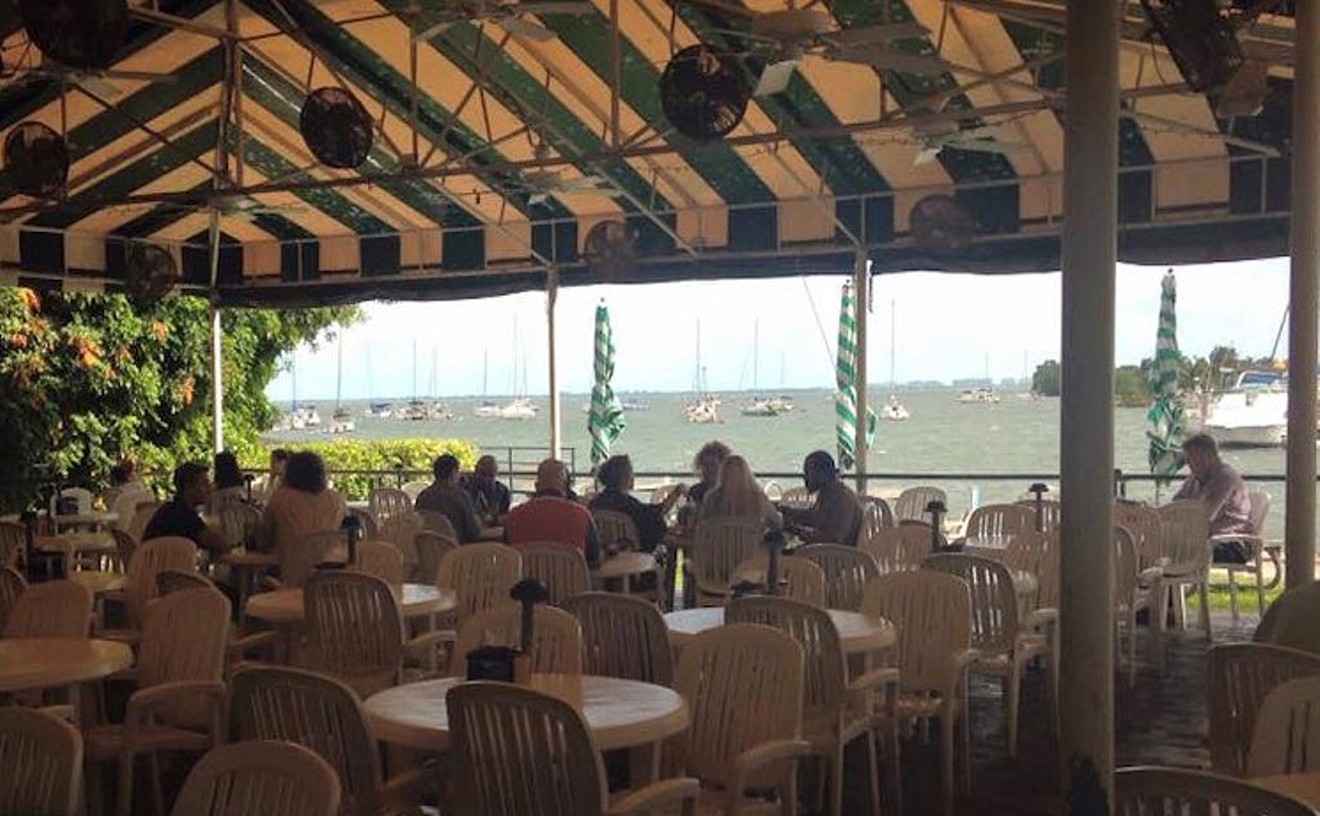 When Scotty's Landing, the cozy outdoor restaurant in Coconut Grove, closed its doors in 2013, our hearts mourned. It was the charming spot for Grovites, tourists, and locals from across the county. But in late 2015, the space underwent minor restorations, got a new name, and — bam — we had Grove Bay Grill. Despite the changes, it still feels like the same old home away from home — or rather, backyard away from your backyard. (It's a new idiom — just go with it). White plastic chairs and flimsy tables are crammed beneath a wooden roof. And while the random guitar player sings strange cover songs from the '80s, the sound of barks and woofs and heavy breathing fills the joint. Careful where you walk, or you might just trip over a water bowl. At Grove Bay Grill, the pups — of all shapes and sizes — are treated just as well as the human guests. "Another Blue Moon for me and some water for Itchy," you tell your server. And right away, she returns with a refreshing bowl for your lapdog and gives Itchy a good scratch behind the ears. On a weekend afternoon, it's not unusual to see a dog curled up under nearly every table. The place may have a new name, but your friends will still text you to meet at Scotty's Landing for drinks Sunday afternoon. Don't forget your pooch.

When it comes to dumplings, Sang's is king. On weekends, you'll find a ravenous crowd of fanatics. And the dim sum is anything but standard. Sure, the tender, translucent-skinned har gow — shrimp dumplings — ($3.35) are pristine, but it's the hard-to-find other options you want. Litter your table with dishes filled with pyramid-shaped spinach dumplings ($2.95) dotted with cubes of slightly bitter bamboo shoots. And don't miss the springy beef balls wrapped in tofu skins ($2.75) or the crisp, pan-fried noodles tossed in XO sauce ($8.50) that take on an intense umami funk thanks to plenty of dried scallops. Finish with a sugary pineapple bun ($2.55). Yes, in Hong Kong, people use them for a sugar jolt to start the day, but here there's nothing wrong with using them to put you in a food coma all afternoon.