Sometimes Miami-Dade County needs a reality check. Learn to budget your money wisely — you can't put everything on credit and expect it to work out in the end. The county learned this painful lesson when the under-construction Patricia and Phillip Frost Museum of Science, like an entitled trust-fund kid living in New York, announced it had run out of cash. The museum ran back to the county saying it couldn't afford the monthly $5 million payment to the construction firm. Commissioner Xavier Suarez called it "a comedy of errors," but it was hard to find the humor. Perhaps that's why the museum's namesakes, philanthropists Patricia and Phillip Frost, swooped in to help finish the project. It wasn't the first headline-grabbing act of charity courtesy of this power couple, whose fortune comes from a pharmaceutical empire. The Frosts have given $33 million to the University of Miami's music school and funded scholarships at Oxford. But this may have been their most resounding move. In exchange for their project-saving cash, they canned nearly the entire board of directors. Then they insisted the bailout would be only a bridge loan until county bureaucracy could free up the funds. The county finally approved the $49 million bailout in April, though that money comes from cash that was supposed to help the museum operate once it's open. Let's hope the Frosts are willing to lay down the law to push the city's other elite to help if funding goes sour again.

"This area is turning into a shithole."

Congratulations, spring breakers. This is the year you may have finally broken Ocean Drive. Critics like Sherbrooke Hotel owner Mitch Novick have been banging a drum for years, claiming the iconic beachfront stretch has been sullied by rip-off tourist-trap restaurants and rowdy booze slingers. Over the past year, though, the complaints have reached a fever pitch as embarrassing incidents — including a mentally ill, nude woman smearing herself with ketchup as drunk men filmed her, and countless drunken brawls caught on camera — forced the Miami Beach City Commission to form a task force and limit late-night alcohol sales. Then came spring break, when crowds got so crazy that police had to evacuate the street and a man was murdered amid the revelry. Few have been so blunt about the situation as Novick, but his to-the-point quote hit home for many critics.

Here's how Miami International Film Festival director Jaie Laplante described the most recent iteration: "This year's lineup is like a prism that invites Miami to see the world with an illumination that only the cinema and the artists that create the work can provide." You can say that again. From four locally directed gems (about everything from strippers to skunk apes) to the 40 other nations represented among the 129 films, the festival shone a blindingly bright spotlight on South Florida. And unlike many festivals, MIFF offers a chance for nearly every part of Dade to take part, with showings from downtown's Olympia Theater and Miami Dade College's Tower Theater to Miami Beach Cinematheque and Regal Cinemas on Lincoln Road, O Cinema's North Beach location, Coral Gables Art Cinema, and Cinépolis in Coconut Grove. In its 32 years, the festival has evolved into one of the city's most scintillating events. So mark your calendar now. The 2017 version has been scheduled for March 3 through 12.

Public relations may have a well-earned reputation as a dark art, but that doesn't mean its true masters are all Team Slytherin. Take JennyLee Molina, who has worked in the industry for nearly two decades and understands the media world from all angles. She's a true pro — never pitching more than one story at a time to an editor (bless her soul) and customizing messages to show she was paying attention that one time you ran into her at an event. And outside of her day job, Molina is all about Miami and giving back. She started the 305 Cafecito movement to celebrate Miami's most iconic caffeinated beverage, and now every year on March 5 at Ball & Chain in Little Havana, it's a cafecito party for the whole neighborhood. Most recently, she helped spearhead a cultural rejuvenation in Hialeah's new Leah Arts District.

Don't panic. It happens to everyone the first time they lay eyes on Jencarlos Canela: You forget who you are, where you are, and what in God's name you were doing. He's simply so handsome that your brain screeches to a halt in response. But once those synapses start firing again, you'll realize this Cuban-American heartthrob has legit talent to go with those looks. Canela began his career in showbiz in the Telemundo novela Pecados Ajenos and later recorded three full-length studio albums — Búscame (2009), Un Nuevo Día (2011), and Jen (2014). His ascent to true stardom began by landing a role as the leading love interest in Eva Longoria's NBC series Telenovela in late 2015. The sitcom follows a group of telenovela actors as they navigate their lives on- and offscreen and is set in Miami (though it's not filmed locally). As the Miami-born singer continues to move from Spanish-language entertainment into the mainstream, Canela has demonstrated his vocals and acting chops on Fox's The Passion, a live-action musical telling the story of the Passion of the Christ that aired on Palm Sunday this year. His sea-green eyes are so dreamy you'll want to cover your bedroom walls with his posters and pretend you're a preteen again.

From Aimee Carrero's star turn as Disney's first Latina princess to Chrissie Fit's crooning in Pitch Perfect, Miami actors have been dominating Hollywood by breaking stereotypes. Suki Lopez has now shot to the forefront of that noble trend. The newest season of the age-old classic Sesame Street has cast Lopez as "Nina la Latina." The actress is not afraid to let her Miami-ness come out when playing the character. She describes Nina as a "total millennial" who works tons of jobs on Sesame Street to pay her way through college. Just like Lopez, Nina is bilingual, Cuban-American, and proud of her heritage. Before landing her wholesome new gig, Lopez performed aboard Disney Cruise Line ships and played the role of Consuela in the national tour of West Side Story in 2013. She graduated college from New World School of the Arts in Miami. Although her roots will always be in the Magic City, Lopez currently splits her time between Los Angeles and New York City. But it's her hometown character who will shine through with Big Bird and Elmo on TV.

For a while, it seemed the former Florida House speaker and U.S. senator would become president. All you had to do was look at that handsome face and hear that clever talk, and you knew where the West Miami native would be January 20, 2017. But then Marco Rubio stooped to playing Donald Trump's game, insulting, sliming, and giggling about the business magnate's "tiny, tiny hands." Next came various stories about his less-than-savory connections back in his hometown. Oh, and his sketchy personal finances were laid bare in the national press. One headline, though, from Slate, said it all about why GOP voters ultimately rejected the guy who was supposed to be the first Tea Party-approved president: "Former Florida Allies Assert on the Record That Rubio Is a Lazy, Devious Little Twerp." Just so it's clear: Miami New Times still loves you, Marquito!

We all have our bad nights and unflattering moments. But most of us don't end up having to apologize for them in an interview with George Stephanopoulos on Good Morning America. Yet that's exactly what happened to Anjali Ramkissoon, a fourth-year neurology resident at Jackson Health System. After a night out in Brickell, during which, she later explained to Stephanopoulos, she broke up with her boyfriend, the petite, young doctor tried to steal someone else's Uber ride. Then she berated the driver and jumped into his car. As bystanders filmed, she scattered the contents of the car onto the street. "You don't know who the fuck you're messing with right now," she said at one point. However, when a video of the incident was uploaded to YouTube, a horde of internet trolls made it their business to figure out exactly who the fuck she was. Even though once the video stopped rolling, Ramkissoon made amends with the driver and paid him for the damage, the internet did what it seems so intent on doing nowadays: the complete humiliation and obliteration of anyone who dares raise its ire. At least Ramkissoon's national mea culpa on GMA featured all the class she seemed to lack in that now-infamous viral moment, which eventually cost the physician her job at Jackson. 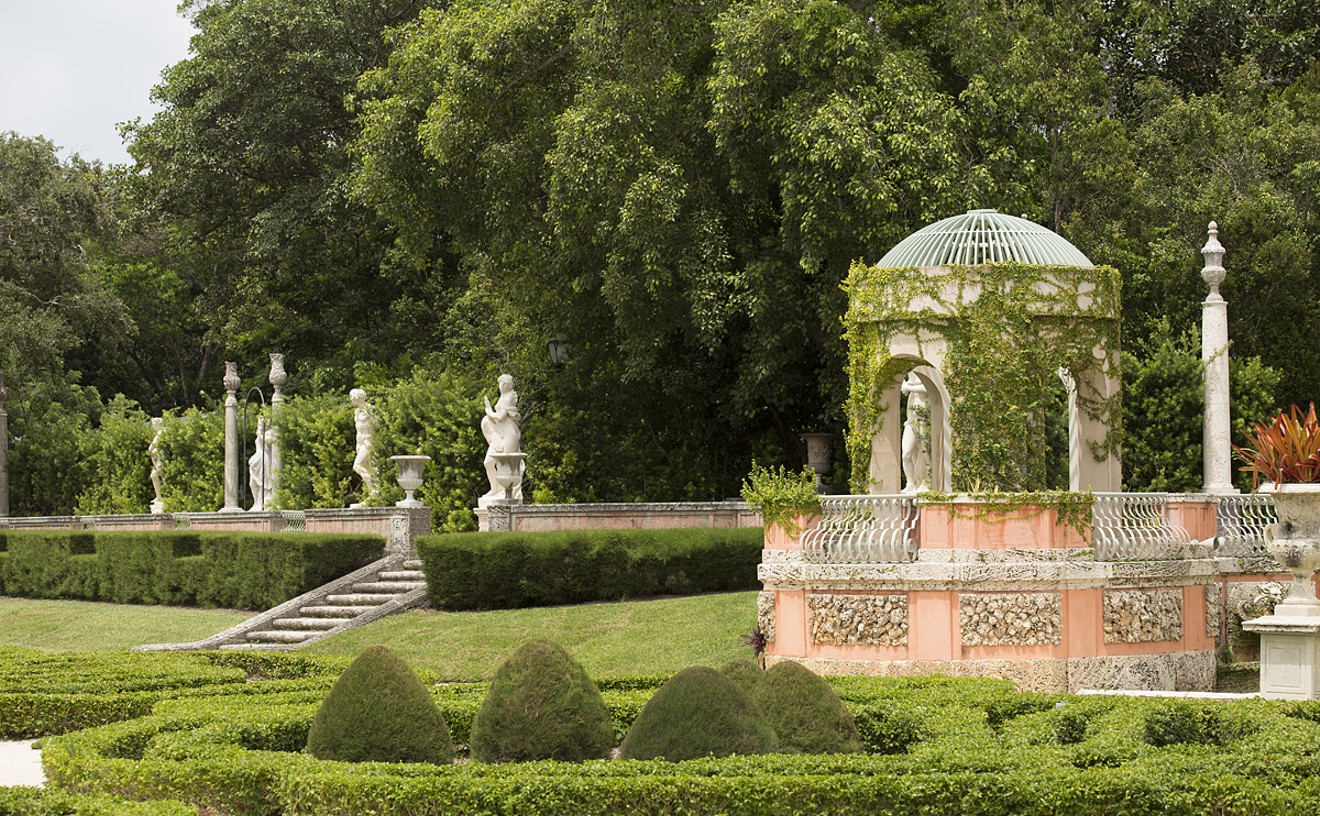 A warm shavasana settles your inner worries as your nose fills with the scent of the lavender oil dotted on your forehead by a fit yogi. As a light, attractive sweat glistens on your forehead, you tune that messy brain into the universe's alpha waves right alongside the beta waves of Biscayne Bay. This is all thanks to the elastic gurus of Prana Yoga, who not only get you to a higher level of consciousness at the Coral Gables studio, but also bring their gifts on the road one Sunday each month to an equally spiritual location, Vizcaya Museum & Gardens. In the shadow of this early-20th-century faux-Mediterranean villa, you can fortify your gray matter and watch healthy bodies all around you bending and folding and downward-facing-dogging into the grass. More important, the ladies at Prana's Vizcaya class know that body and mind are inextricably linked. Taking care of one nourishes the other — which is so hot. And each class is held at a different spot onsite so you can introduce yourself to toned babes in plenty of different, and hopefully all flattering, lighting. Classes cost only $16.82, so you'll have plenty of cash left for a post-yoga cool-down drink somewhere — and maybe take the first step toward relationship enlightenment.

There are perfectly fine reasons to pursue that guy you ran into who was totally hammered at 3 a.m. on a Tuesday — but don't kid yourself that there's anything intellectual about that attraction. You can't reliably expect to find your future date to next year's O, Miami poetry fest stumbling around drunk at a happy hour either. So if you want a man with good taste, even better timing, and a big brain, check out Pérez Art Museum's monthly shindig Third Thursday, which is free with a museum admission. It doesn't start too early and doesn't stay open too late. It's there, on romantic Biscayne Bay, where dolphins play at the foot of the museum's grand outdoor staircase, where you will gaze into the eyes of your new smarty-pants beau, still sober enough to remember your name but one drink away from going in for the kill. How do you know he's probably not a total drag on society? He has come to PAMM either to enjoy the modern art on display or to groove to the live music and DJs presented by Poplife, Miami's enduring party-throwing tastemaker. There are drinks and music, but in this case, you'll be straining your voice to talk to a guy who's actually worth your time.