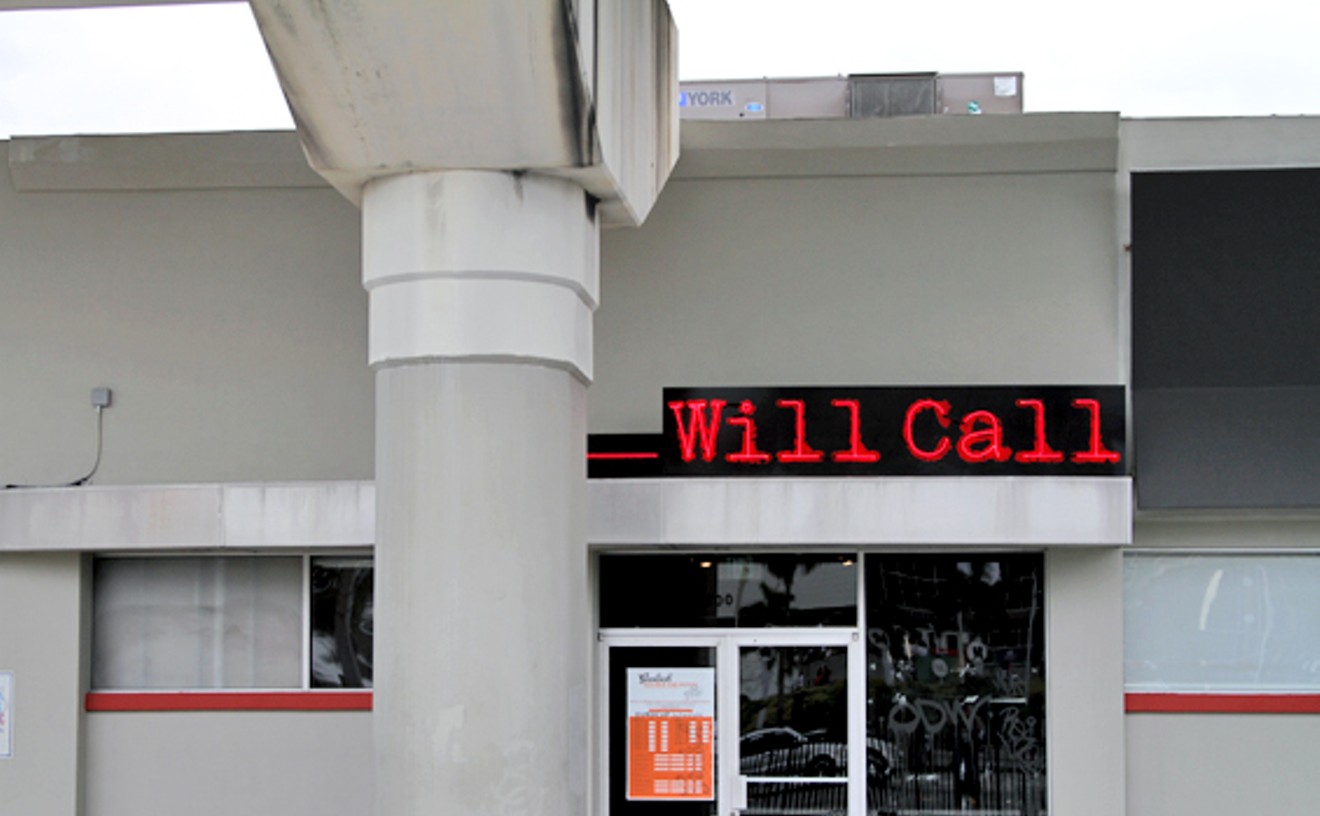 Only in Miami can you find a 24-hour sports bar that doubles as a downtown after-hours spot. Sure, you can go to other 24-hour establishments and listen to world-class DJs pump it until an ungodly hour. But honestly, most sane human beings still partying at 6 a.m. only care about keeping that sweet buzz going — DJs be damned! Will Call is the perfect spot for that. There is no loud, heart-palpitating music to distract you from what really matters the most: the drinks. And once you feel ready to black out, just ask to see the menu, because food is served until 7 a.m. Sure, you might not always remember precisely what you ate or drank after leaving Will Call, but your friends will tell you the truth: You had a blast. Take their word for it.

Sure, Miami Beach is home to some of the world's best nightclubs, but somewhere along the way, that neighborhood forgot what nightlife has always been about: the music. And a relentless focus on the latest and buzziest in dance music is exactly what the selection of venues in mainland Miami now excels at. Of course, the giant of downtown and Park West's nightlife scene will always be Space (34 NE 11th St.). Even with that megaclub under new management, there's no reason to expect this dance music mecca to go anywhere. Then there's Grand Central (697 N. Miami Ave.), the city's premier midsize live music venue, along with its upstairs sister, the Garret, which host club nights favored by the city's hipsterati. And don't forget Mekka (950 NE Second Ave.), which breaks off into several smaller venues including popular gay hot spot Discotekka. Or perhaps you're looking for an after-hours drink: The Corner (1035 N. Miami Ave.) is the best option for a 6 a.m. nightcap. There's even proof the district is ready for rebirth with the recent addition of Therapy (60 NE 11th St.) and the remodeling of Goldrush (29 NE 11th St.), which should be back up and running later this year. Thanks to a special zone carved out by commissioners, the whole hood can operate 24 hours a day — the best foundation for a nightlife monster sure to be pulsating for years to come.

To say SL Miami is cozy is like saying LeBron James is kinda popular in Dade County. This bar is small in every sense of the word. That's why getting in can be somewhat challenging. You better be beautiful, rich, famous, a combination of all three, or hanging out with LeBron himself. With space at a premium, SL Miami can afford to be selective. Wedged into the James Royal Palm, it's an outpost of Manhattan's Meatpacking District lounge of the same name. Catch Miami, the über-chic restaurant inside the James, is situated nearby. And with so many of Miami's beautiful people and visiting jet-setters already stopping by for a bite to eat, SL has become the sort of VIP room where matters of whether someone will be going to Saint Barts for the winter and the Hamptons for the summer can be overheard in normal conversation. There's a small bar serving (expensive!) drinks, but here it's all about the bottle service. (Any other way and you're doing it wrong.) Hey, no one said the VIP lifestyle is cheap. 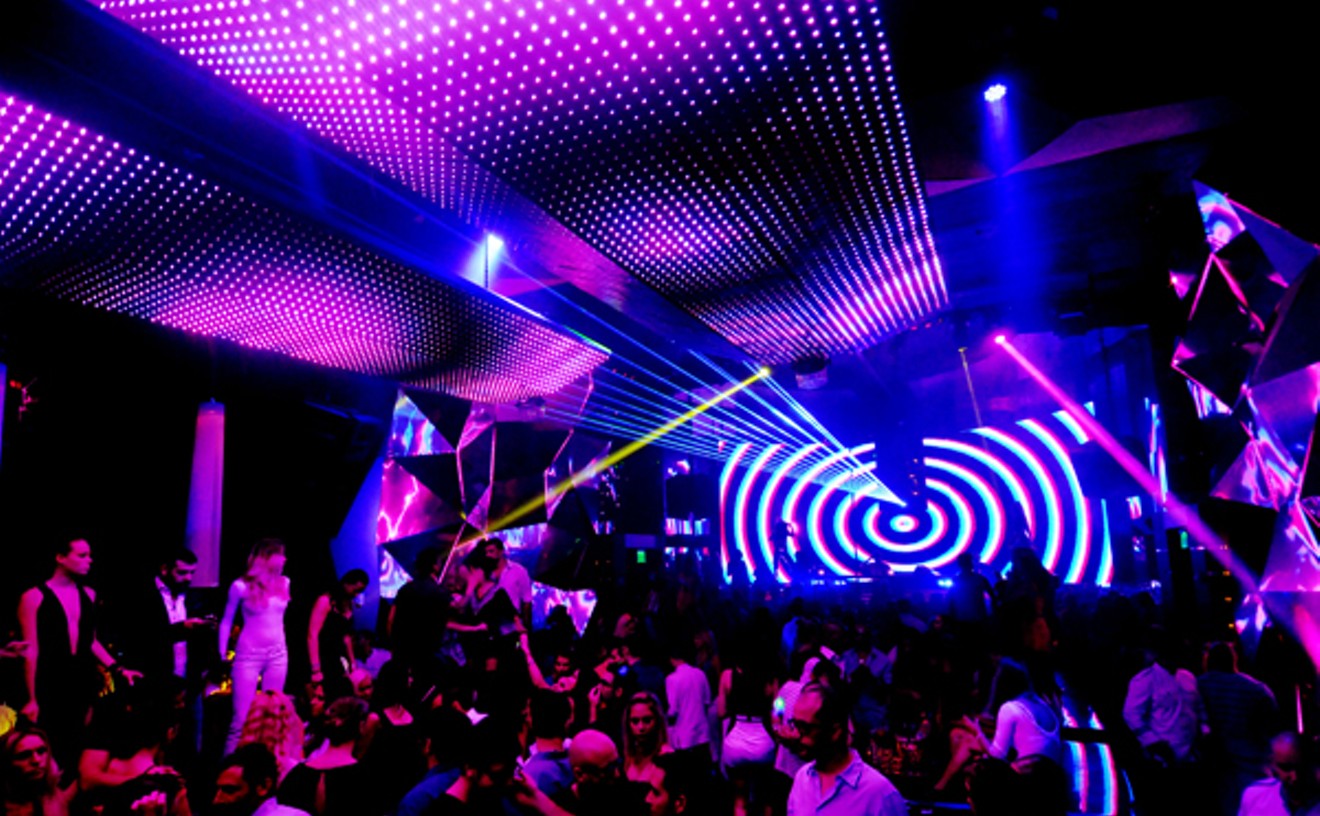 The Opium Group has spent the past few months on a renovation spree worthy of its own HGTV show. First was Mansion, which received an impressive and much-needed face-lift that turned it into a 360-degree theater of debauchery. Then, earlier this year, the nightlife conglomerate announced that its ultra-lounge, Set, would be the next property to go under the knife. When it returned in time for Miami Music Week 2013, it had a fresh, new look, including a Zevs-inspired logo, that emphasized the nightclub's strongest attribute: VIP bottle service. Before you write it off as another elitist lounge, though, read on. Set was never really a dance club — there is no dance floor — and the awkward positioning of the DJ booth toward the front of the house was always a bit off-putting. But the redesign moved the booth toward the back and installed an impressive LED backdrop. Geometric designs jut from the walls, while graphic illustrations of half-naked women tower above the room. The new design gives the room a more "punk" feel without losing its opulence. The space also feels smaller, creating a more intimate bottle-service ambiance, which means unless you're seated at a table, you won't enjoy the full Set experience. For that, the Opium Group seems to be making no excuses. And unlike other South Beach megaclubs where table service and dance floors awkwardly coexist, the new Set is dead-set on providing a VIP experience like no other. Did it succeed? The large bill and subsequent hangover say yes.

Miami is the land of 10,000 titty bars. But G5ive Gentlemen's Club isn't just another full-nudity bump 'n' grind joint. With "over 100 beautiful women every night," models with bottles, pro ballers, and famous hosts such as 305 rapper Ice Billion Berg, ATL dope boy Lil Scrappy, and retired exotic-dancing diva Tip Drill, this North Miami Beach strip club has become the preferred nudie spot for bosses and wannabes with a taste for big booties, party rap, premium liquor, private lap dances, and Southern cookin'. Watch silver-G-stringed asses drop from the ceiling like it's New Year's Eve. Snatch up the mike and shout down the fakes. Guzzle Hennessy in the VIP with a lady on each leg. Scrub yourself while sudsy babes perform a rub-a-dub show in G5ive's indoor shower. Order breakfast for two (fried chicken and Belgian waffles with a side of vanilla ice cream) at the bar. Go hard. Go wild. Go broke. Get G5ive'd.

There's no disputing that Wynwood's Second Saturday Art Walk has grown beyond its organizers' wildest expectations by attracting thousands to the bustling arts district every month. Attendees flock to the graffiti-stained blocks for displays ranging from blue-chip, museum-quality masterpieces to cutting-edge experimental works. Lately, though, parking after 7 p.m. seems impossible, and you have to throw elbows like Dikembe Mutombo to fight your way through the throngs outside the best shows. So forget that. Most of the galleries are now open beginning at noon, when parking is plentiful, crowds are comfortable, and the art is just as good. Plus, you can actually talk to the dealers about their programs and chat up exhibiting artists about their visionary works. When you've had your fill, you'll have plenty of time to hit up the food trucks corralled on the corner of NW 23 Street and Second Avenue before the grilled-cheese lines resemble a tribute to Soviet Russia.

Miami street artist Trek6's artistic career began at age 6, when his Puerto Rican grandmother gave him some paint from her art supply store. She was probably just trying to keep the kid entertained. Now, three decades later, it's blossomed into a talent that's created some of mural-happy Miami's most recognizable walls. His Bob Marley mural in Wynwood draws a pilgrimage of art fans, music lovers, and photographers. And last year, in collaboration with artist Chor Boogie from San Francisco, he brought back the famous boombox mural at NW Sixth Ave and 23rd Street. Whether you're judging by quantity (Trek6 boasts about 27 walls in Miami since he started tagging them in the '80s, seven of which are still on view) or by quality, Trek6 is a Miami mural legend. And he's hustling to bring the 305 to the rest of the world. Earlier this year, he participated in Pow Wow Hawaii, a gathering of street artists from around the world designed to create connections and inspiration. The event made collaborations such as those behind the boombox and Marley murals possible. He's also taking his skills to the canvas and beyond by exporting his unique, Miami-grown talent to fans across the country. And he's working on a children's book. This is not your average street artist. Trek6 is making Miami beautiful one wall at a time. 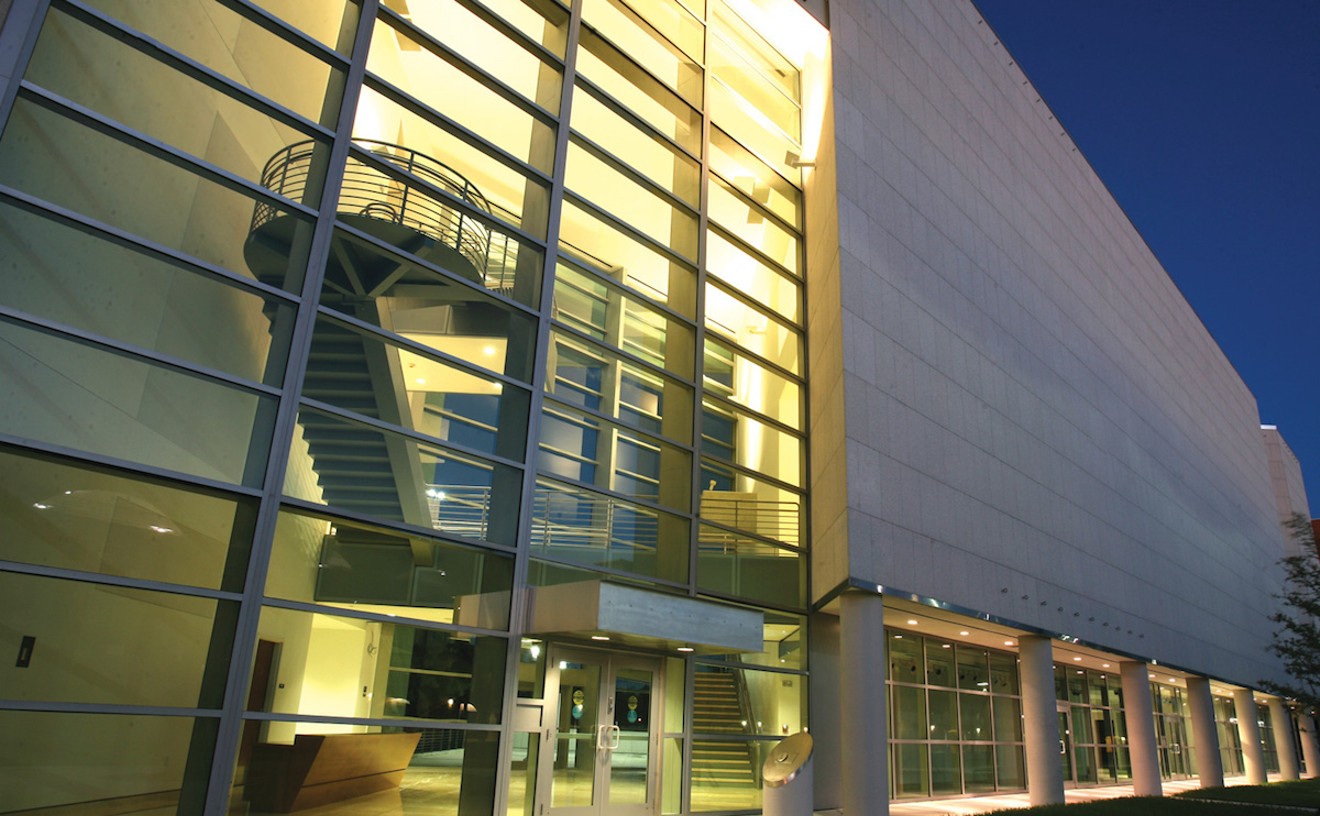 What makes a great museum? Glad you asked! Begin with a jaw-dropping facility, fill it with a consistently enthralling permanent collection, and then spice things up with a consistent mix of programming and special shows. Few local museums have perfected that formula quite like the Frost. The building is first-class — a gleaming, 46,000-square-foot, Yann Weymouth-designed home with a soaring atrium and several expansive galleries awash in natural light beaming through overhead skylights, not to mention a stairwell rising from the lobby that appears to float in thin air. Around each bend, you might discover works celebrating the 500th anniversary of Ponce de León's arrival in Florida or ancient bronze sculptures from Southeast Asia and Benin from the museum's vast holdings. And the touring exhibits are the cinnamon atop the latte. Last year's lineup of memorable shows included the traveling "Ursula von Rydingsvard: Sculpture," featuring the artist's monumental cedar works, and "To Beauty: A Tribute to Mike Kelley — Selected Works From Private Collections," showcasing the late talent's genre-busting, iconic works. If all of that isn't enough, step outside, where you'll find the Frost's world-class sculpture garden. Like everything else on tap at the museum, admission is always free.

Fact: No Locust Projects, no Wynwood Arts District. OK, OK, it might be tough to prove that hypothetical. But when Locust was founded in 1998, it became the first artist-run space in the area and quickly began drawing crowds seeking an alternative to stale local gallery scenes. Since then, Locust has been an alt-haven where artists have been able to take risks early in their careers. Locust has presented work from nearly 250 local, national, and international names and mounted more than 125 exhibits. The nonprofit has become the largest experimental contemporary arts organization in the Southeast. It's not unusual now for shows that start at Locust to rocket to bigger and bigger platforms. Consider Theaster Gates, whose "Soul Manufacturing Corporation" debuted at Locust this past November and drew droves of Art Basel cognoscenti to the gallery. It went on to earn slots in Philadelphia's Fabric Workshop & Museum and London's Whitechapel Gallery. Locust's Out of the Box public art initiative has also made contemporary art accessible to the masses by installing site-specific artworks on billboards and bus shelters across the county. Even if Wynwood would have happened without Locust, no one can claim it hasn't been the engine powering the neighborhood to relevance.