Want to gorge yourself but not with the same old Chinese buffet? Check out Camila's Restaurante Brasileiro in the heart of downtown Miami. Don't expect anything fancy, but it has the feel of a working-man's joint. What you should expect is a delicious, authentic Brazilian meal, buffet style of course, for $12.95 — with free coffee (other drinks cost extra). Parking is a bit of a hassle, but filling yourself to the brim with a Brazilian buffet is well worth it. Feijoada (black beans with pork), vaca atolada, passionfruit pudding, fried chicken and pork, and much more is sold here. Camila's is one of the better values in town and a refreshing change of pace. 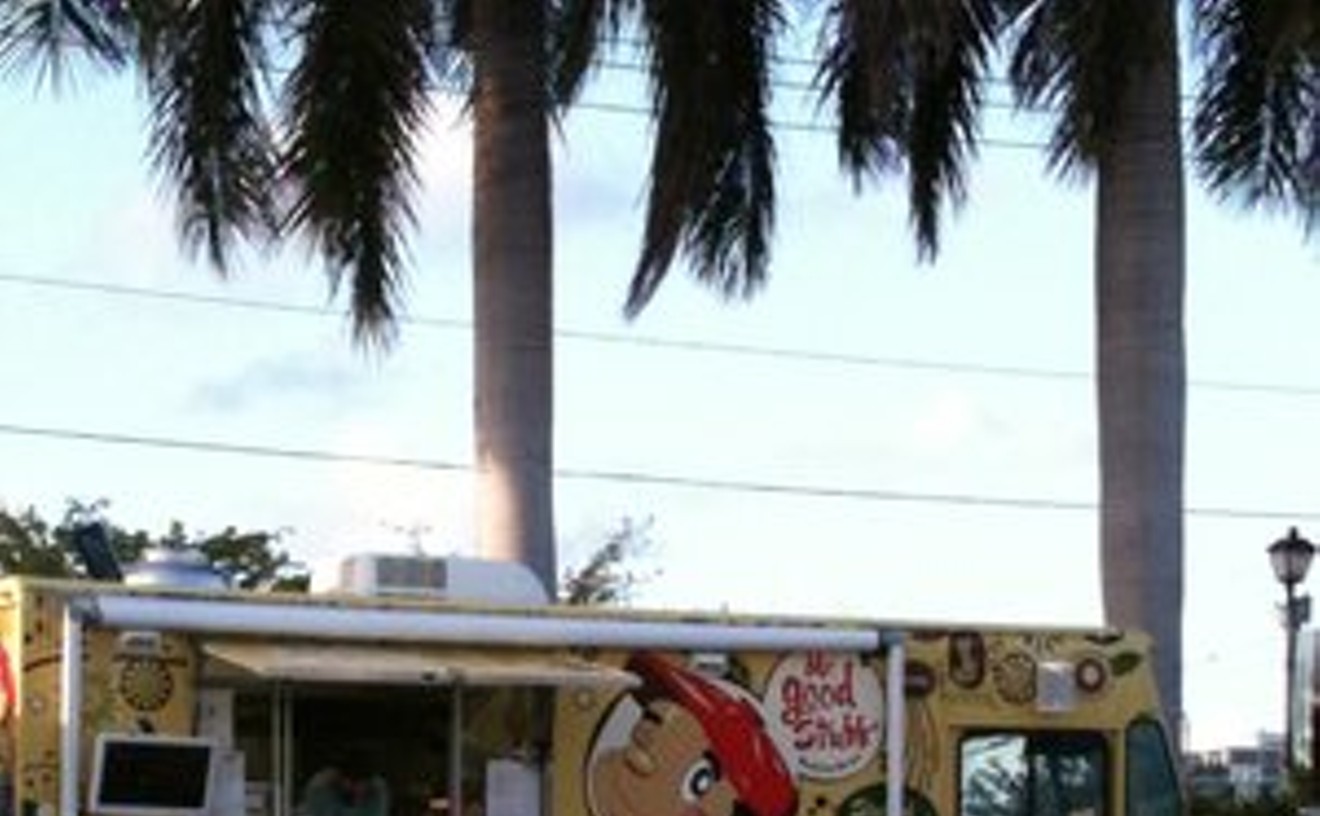 In Miami, there are almost 100 food trucks. Most serve the same three items — burgers, tacos, and cupcakes. Then there's Mr. Good Stuff, which offers the luna. If you're asking, "What the heck is a luna?" you're not alone. Contrary to popular belief, it is not lunch for moon men. We're talking about pork and brisket slow-cooked for hours until the meat is tender, juicy, and filled with the flavors of your childhood home. These meats are cradled inside an arepa, a Venezuelan corn cake freshly made on a griddle. They are then topped with house-made slaws or pickled onions until they're sloppy, messy, hot, and so satisfying you'll be rolling your eyes toward heaven as meat juice trickles to your elbows. For eight bucks, your view of food trucks and the world, along with your waistline, will expand.

Remember the ice-cream truck driving slowly down the street as the sun fell on the playground swing set? As a familiar little jingle played, hot girls in Daisy Dukes writhed against the rooftop stripper pole as a fudge ripple cone melted over their suntanned breasts. Well, if you don't have those exact childhood memories, the girls of Aphrodisiac Ice Cream invite you to make some new, sexier ones. The Aphrodisiac truck is the brainchild of Costa Rican model Jacqueline Suzanne, who can also be found grinding it low on the truck's stripper pole and inviting you to try her wares. Sex sells, and here it sells ice cream made with all-natural ingredients. Depending on the event, the creamy goodies can be typical vanilla, chocolate, and cookie dough, or they can be wild, booze-spiked frozen treats. Either way, we think the Good Humor Man is out of a job. As for Mister Softee, let's just say he'll have a hard time living up to his name. Everybody loves macaroni 'n' cheese, and everybody loves cute, cuddly monsters. Don't believe us? Ask any kid if he or she would rather have a five-course tasting dinner at (fill in the blank with any overpriced, stuffy restaurant) or eat some warm mac 'n' cheese while watching Monsters Inc. Because children are acutely aware of what's good in this world (their bullshit meters having not yet kicked in), we submit for your approval one purple food truck with a flying, single-horned cyclops as its mascot. The meal? Mac n' Jack — macaroni in a bubbling bath of jack, colby, smoked Gouda, and sharp cheddar, mixed with broccoli for added color and nutrients, and topped with bread crumbs for crunch and texture. At only six bucks, it'll make you think you're in some sci-fi movie. Though Purple People Eatery's mac 'n' cheese is real, alas, the monster is pure fiction. But make sure the closet door is closed — just in case. 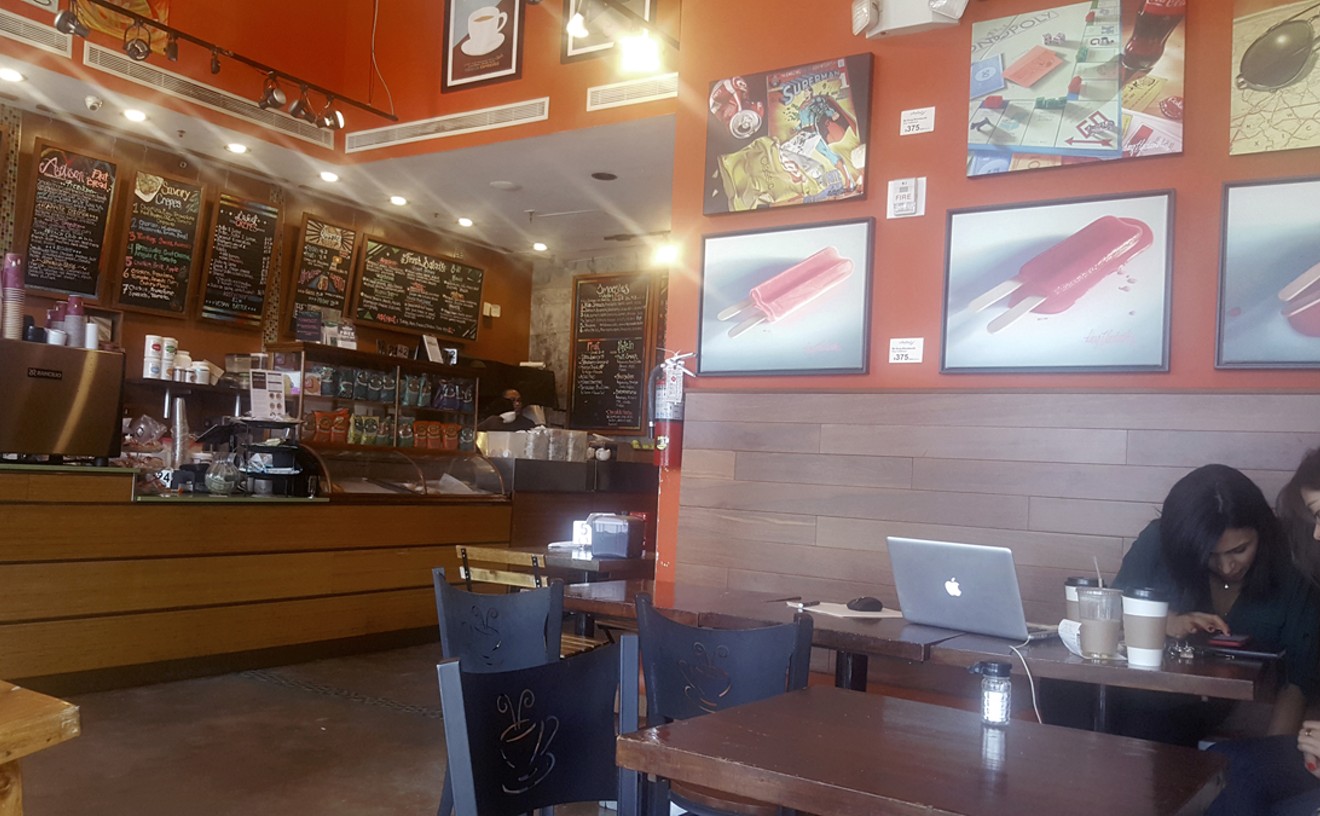 Grilled cheese is probably the food we loved first and best. But as the years passed, we outgrew those sandwiches, G.I. Joe, and Barbie and moved on to more lively playmates and sophisticated fare. While we mourned the passing of our childhood, we figured that was the price to pay for being a grownup. Angelina's Coffee & Yogurt says, "Screw that crap," with the adult grilled cheese. Riffing on the concept of our childhood favorite with elevated ingredients, the small midtown coffeehouse offers nine sandwiches — all using decidedly big-boy ingredients such as Brie, Gouda, red onion, and goat cheese. We love the simply named "Number Three," a salty and smoky blend of imported provolone, spicy chorizo, and arugula on oversize, fluffy country white bread. At $7.95 each, these are grilled cheese sandwiches to be paired with a good beer rather than chocolate milk. Now if someone would just invent bourbon-infused Goldfish. 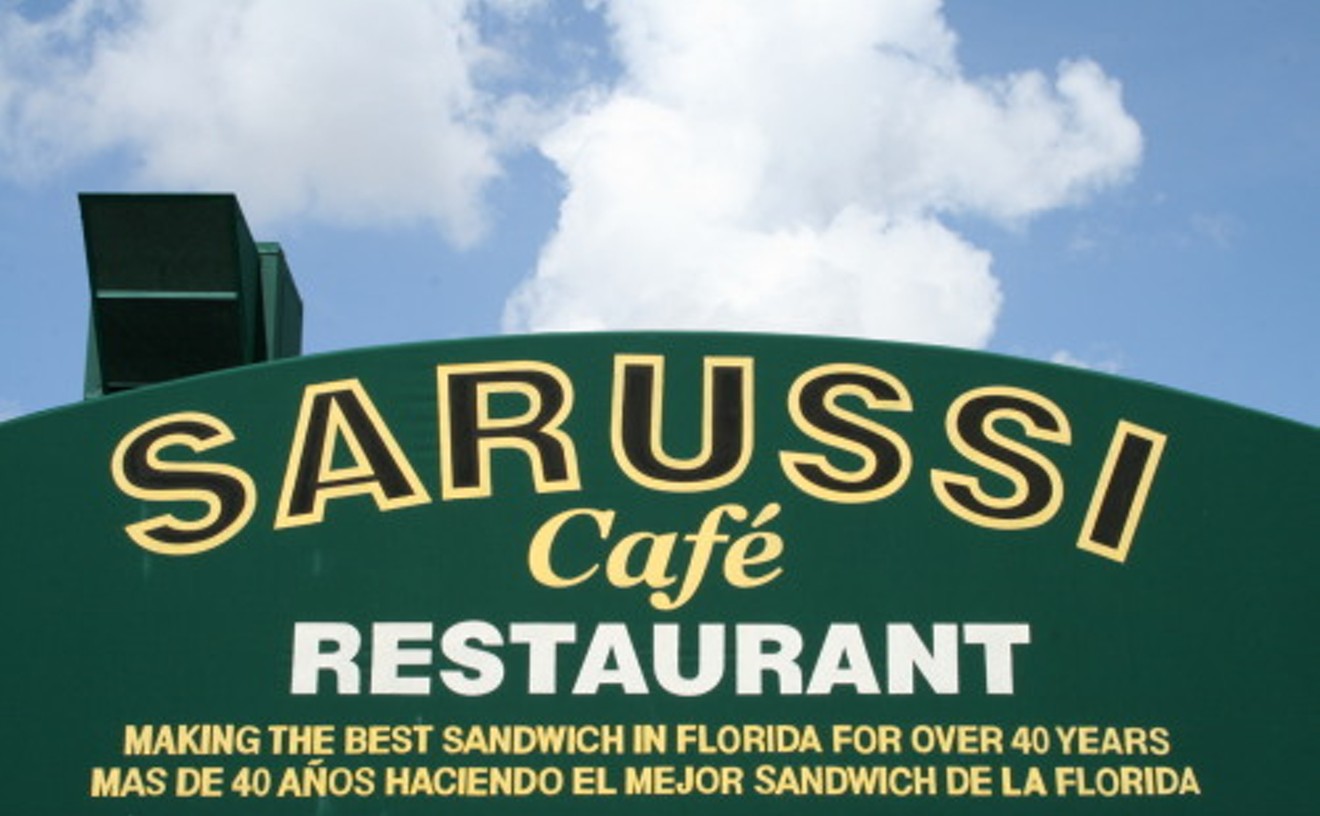 There are five different ways to get your cubano at Sarussi Café & Restaurant, which has been serving a unique variation on the classic sandwich for five decades on Calle Ocho at 68th Avenue in West Miami. Try its "El Original" eight- or 16-inch ($5.93 or $11.87). The institution's trademark sandwich comes with the usual sliced ham, roast pork, and pickles, but instead of Swiss cheese and mustard, El Original is made with mozzarella and a tangy red "secret sauce." One more thing adds to its unique flavor: Rather than getting cooked on a grill, the sandwich goes into a pizza oven, the legacy of the place's original incarnation as an Italian restaurant. For snackers and novices, there's a $2.75 mini-cubano, a bite-size version with all the aforementioned key ingredients. And for the superhuman food warrior, there's the "Man v. Food Original." Named for the Adam Richman-hosted Travel Channel show, which visited Sarussi in 2010, this behemoth (served in eight- and 16-inch lengths for $12.10 and $22) comes with double the ham, double the baked pork, double the pickles, and double the cheese. If you finish the 16-incher — which comes graciously sliced into fourths — on the spot, you'll score a place on the prominent wall of fame above the luncheonette counter. 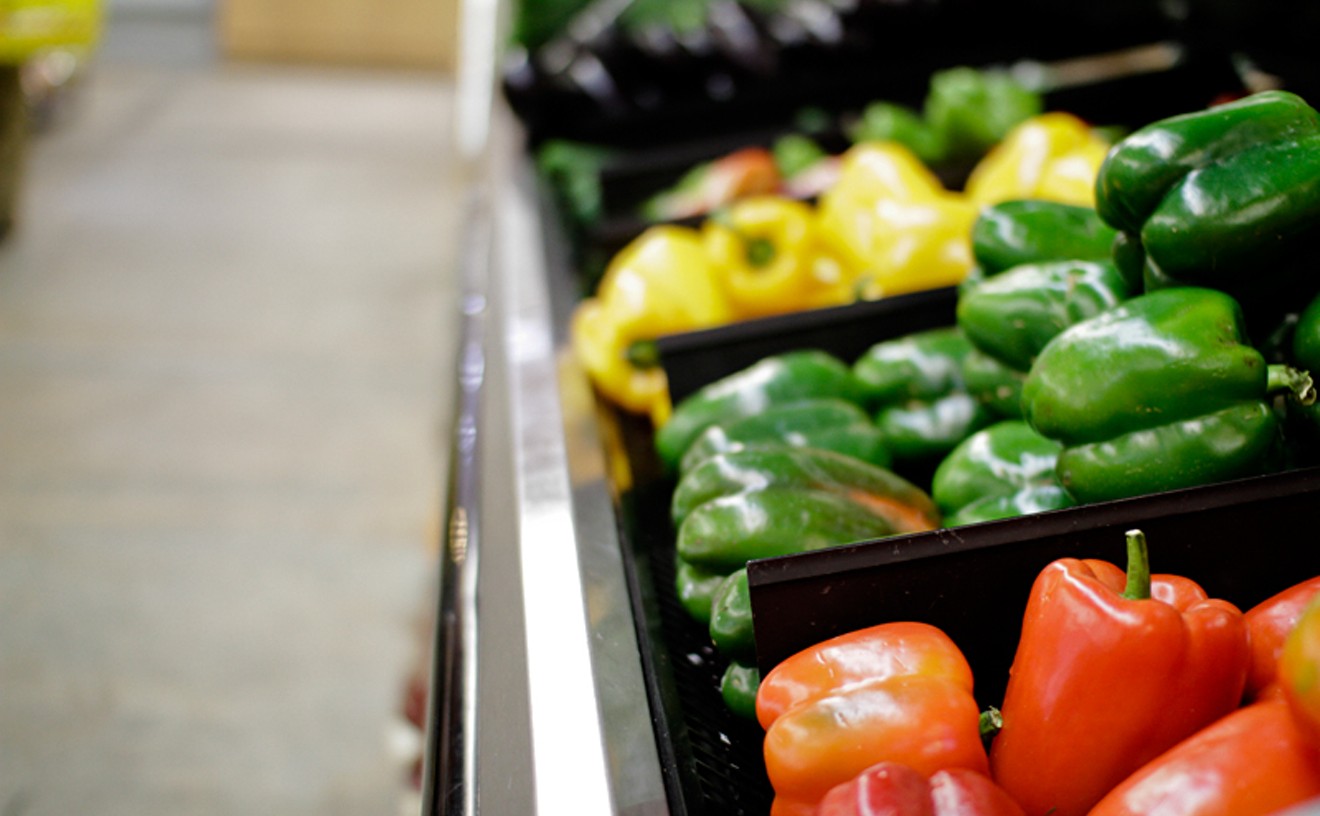 There's a whole lotta #trending going on in #Miami, like #gourmetmarkets for example. But sometimes you gotta go back to #whereitallstarted to get the real deal. Norman Brothers has been family-owned-and-operated for more than 40 years — way before #bacon, #honey, and #macaroons became cool and people knew what #umami was. Throughout the years, the faithful have stayed true to the original and picked up their #seafood, #fruits, #vegetables, #wines, #meats, #cheeses, and #oneofakind gourmet items at this Kendall mainstay. Besides all the grocery items available, you must try the #smoothies, #sandwiches, and #omgtheyaresoeffingdelicious duck dumplings. Norman Brothers is the real #OG. 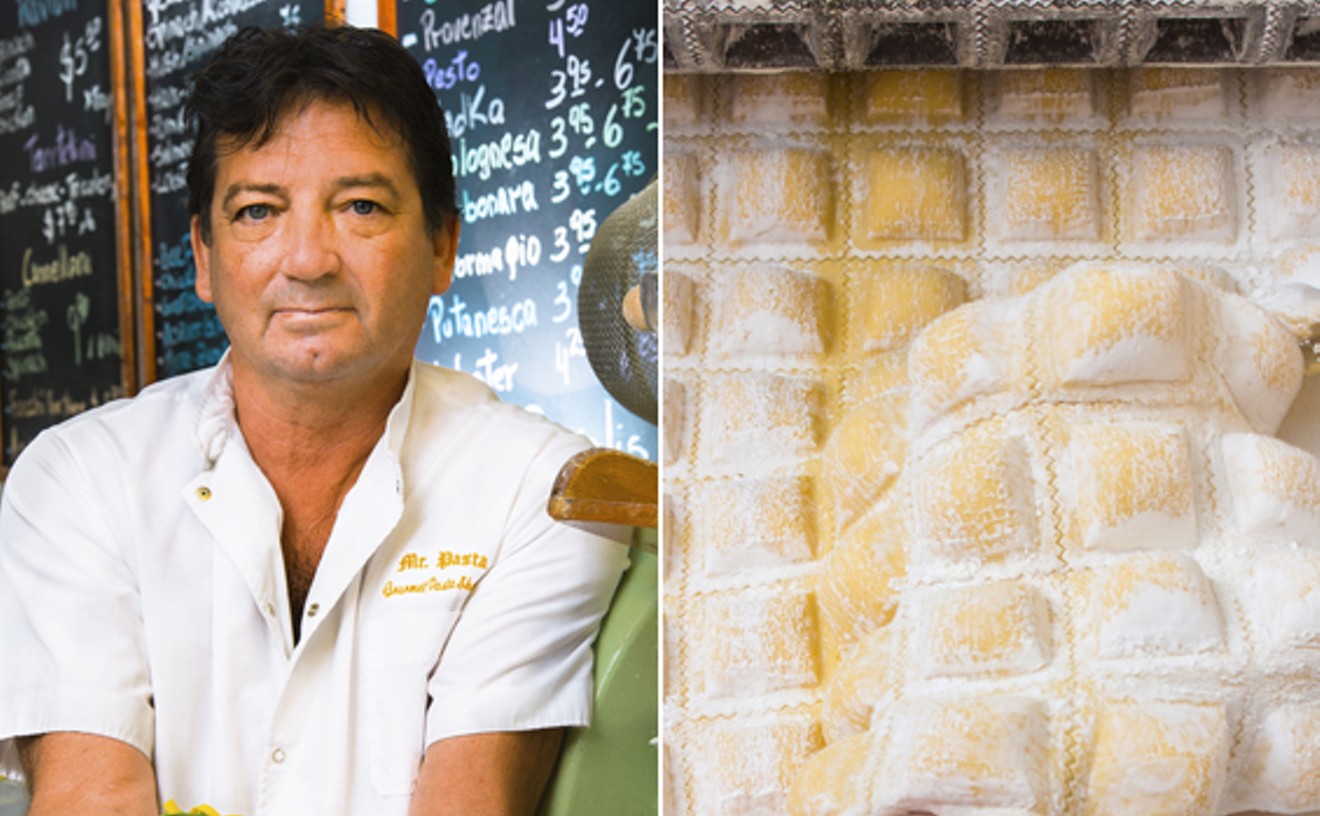 Why is foodie synonymous with yuppie? No matter what our tax returns say, we all have taste buds, right? And weren't the original foodies those Italian grandmas who spent all day cooking delectable dishes with simple and inexpensive ingredients? But in Miami — a town with an epic shortage of farmers' markets and unpretentious specialty food stores — it's tough to buy good ingredients without cleaning out your bank account. So Mr. Pasta shimmers like an oasis. The little store in North Beach sells a variety of fresh noodles in varieties ranging from egg to tomato to black squid. It also offers masterfully handcrafted gnocchi and ravioli. Prices start at $4 for a pound of noodles — enough to serve you and your date — and are worlds better than that stiff stuff from a cardboard box. It is also a hell of a lot easier than mixing and rolling your own dough. Cheeses — such as a one-pound ball of fresh mozzarella for $4 — taste better and cost less than anything you can buy at a supermarket. Imported canned tomatoes and sauces sell at competitive prices. Forget those extortion artists at the gourmet chains, and stock up here instead. Nonna would be proud.

Café 46 is to Joe Allen what Rhoda was to Mary Tyler Moore, what The X Factor is to American Idol, what one Rolling Stones album is to the previous one: a spinoff of the same ideas and some of the same players, except with a different name and played on a new stage. The most noteworthy returning player at Café 46 is owner/host/manager Mario Rubeo, the former co-owner/host/manager at Joe Allen, which ended its ten-year run in Miami Beach last year. Mario is the star at this venue (as he was at JA), his energetic congeniality making former Joe Allen patrons feel right at home — while bringing in new fans as well. The menu has hardly changed; the same font announces identical homespun comfort foods: pan-roasted matzo chicken, meatloaf with mashed potatoes, sautéed calf's liver, a damn good hamburger, banana cream pie. Except for two steak offerings, main courses run $12 to $18. Beers and wines are equally budget-friendly. Like Joe Allen, Café 46 would be a great neighborhood restaurant regardless of what neighborhood you put it in. And that's no spin.

Once upon a time, a Mexi-California boy named Alex Cuevas found he had a gift: He was an animal whisperer. Here's the response he got from every quivering cow, pig, and fish he faced: "Please, don't eat me. And tell the others." He took his furry and slimy friends into his arms and promised to broadcast their message to his species. From coast to coast, Cuevas has honored that commitment, and Choices Vegan Café is his largest endeavor to date. He and his brother Jorge have assembled a menu that includes goodies such as delicious vegan pancakes (weekends only), supercharged "chili con kale," and "the Vegan Assassin's Insane Mexican Wrap," which mimic traditional American classics and ease recovering omnivores into the vegan world. Choices also offers nutritionally optimal raw options such as nori wraps, jícama salad, and organic green juices. The Cuevas brothers are convinced that a healthy, eco-friendly, and animal-cruelty-free world doesn't have to be a fairy tale, and they're making a delectable contribution toward bringing their vision to life.