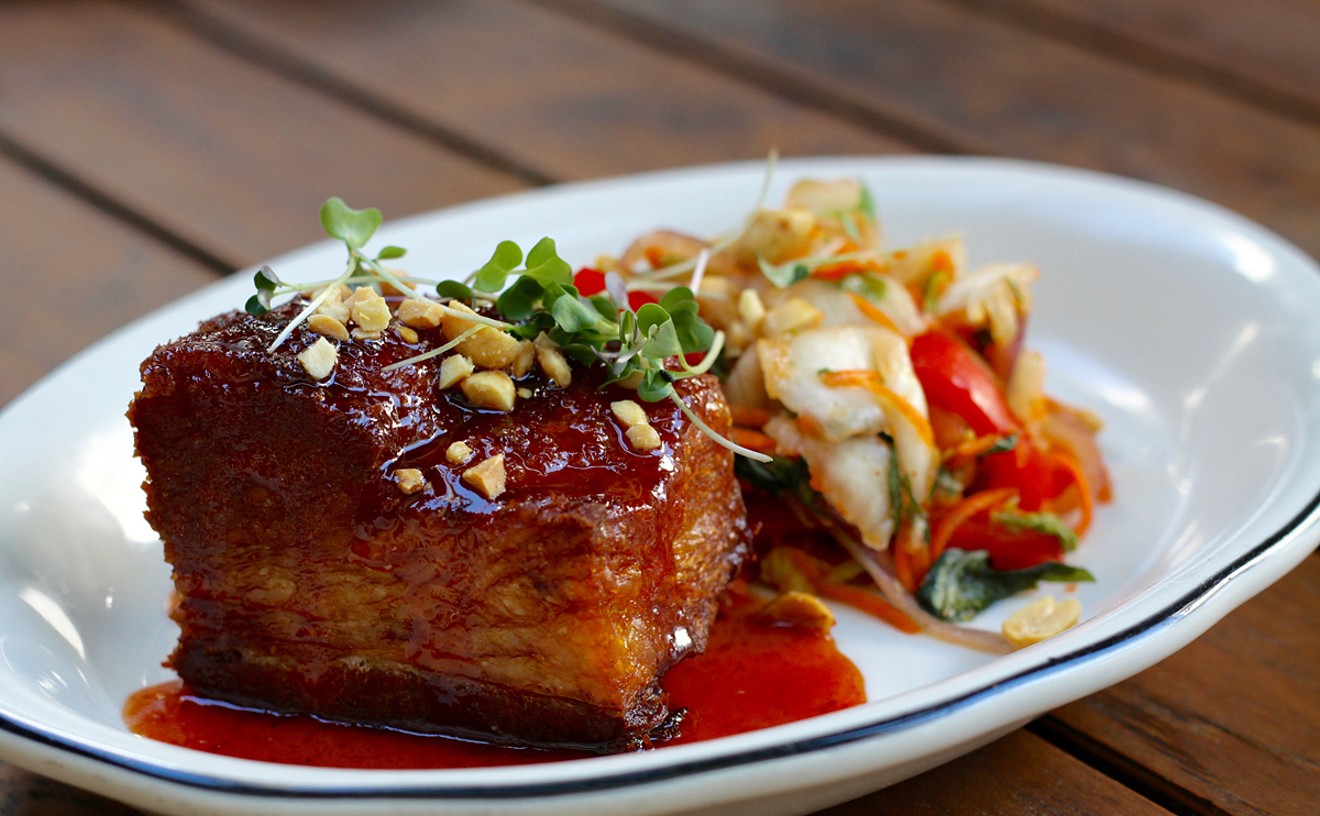 It's one of the great culinary success stories of our time — how the useless appendages of a bird about as capable of flying as an anvil became this incredibly popular thing to eat. Chicken wings are mostly skin, bone, and gristle, but their little meat is tender and succulent. They fry up nicely and take well to virtually any sauce you can imagine. House of Wings is the Michelangelo of chicken appendages, with some 50 sauces ranging from lemon-pepper-garlic to barbecue to curry to Jamaican jerk. For less than a buck apiece, they come grilled or fried. Go for fried. The joys of crisp-crunchy skin and juicy, well-seasoned flesh trump lard-filled arteries every time. You can either grab 'em to-go or hang out in the no-frills room, where sporting events play relentlessly on a multitude of TV sets.

Although you won't find lou mei — a dish made from animals' internal organs and entrails — at China Steak House, the eatery could hold its own in the Guangdong Province of Southern China. But the restaurant is located just a few blocks east of the NW 122nd Street exit off the Palmetto Expressway, tucked between a Rent-A-Center and Solid Bodies Gym. There's plenty of parking here and a comfortable bench where you can wait and eyeball the diners at this clean-as-can-be joint. Try one of the 18 house specials on the menu. Our favorites are the Cantonese-style roast duck and the China Steak, a broiled prime sirloin with mixed Chinese vegetables and a secret house sauce. At $9.25 and $15.95, respectively, these entrées are a bargain. The joint also looks out for the anti-meat crowd, serving up a phenomenal Szechuan-style bean curd and a mouthwatering ma po tofu for just $7.95 each. On weekdays, choose from a list of 20 lunch specials ranging in price from $3.95 to $5.35. Each dish includes pork fried rice and a cup of egg drop soup. The same entrées are available as combination dinners. Prices vary, but none costs more than $10. China Steak House is open Sunday 11:30 a.m. to 10:30 p.m., Monday through Thursday 11:30 a.m. to 10 p.m., and Friday and Saturday 11:30 a.m. to 11 p.m.

All right, we all know Miami isn't renowned for high-quality Chinese food. Sometimes when you order in, the most you can hope for is a clearly understandable English speaker on the other line and an edible lukewarm meal when the delivery man eventually arrives. But hey, there's Lotus House. The Kendall strip-mall staple never disappoints. The honey chicken is par excellence; tender deep-fried morsels are served with honey sauce on the side. Get the dinner combo with won ton soup, an egg roll, and pork fried rice for a mere $7.95. The sweet-and-sour sauce comes liberally studded with canned pineapple, and the lunch combo costs a mere $4.55. The restaurant specializes in both Cantonese and Mandarin dishes, so you can mix it up with moo goo gai pan or Szechuan-style beef, depending on your Asian food mood. Service is good, delivery is quicker than you expect, and, thankfully yes, the operator speaks excellent English.

Chinese food is probably one of the most amateur-attempted cuisines around; we've all tasted some variation of a beef Szechuan gone wrong. In addition to all of those wokky catastrophes you can create on your own, there are more take-out joints in town than bottles of soy sauce in Publix. Makes you wonder: Could that rumor about there not being any decent Chinese food options outside of New York be true? Wrong again, snowbirds! If a heaping helping of yummy traditionally prepared Chinese food is what you're craving, make South Beach your destination. For three years, Mr. Chu's has been serving up Cantonese-style dishes that you've tried before (but done right, this time), such as delicious dumplings (starting at $6 an order), a harmoniously sweet and spicy General Tso's chicken, tender beef with broccoli, and perfectly pan-fried noodles. But this traditional eatery also gives you the chance to try — with no trepidation — China's exotic fare. Dig into the Peking duck, head-on and carved tableside for $38 — we hear it's a favorite of Britain's former prime minister, Tony Blair. Or maybe you'd rather the aromatic chicken with basil (braised in three flavors of soy sauce) tickle your taste buds, or the pineapple fried rice ($16). From the sauces to the soups, all menu items are freshly prepared; you won't catch any of the chefs ripping open pouches of sweet-and-sour sauce to ladle over your chicken. And if you crave dim sum from 11:30 a.m. to 4 p.m. any day, more than 58 fried, steamed, and baked items served from a typical push-cart will be sure to satisfy you, and dim sum. 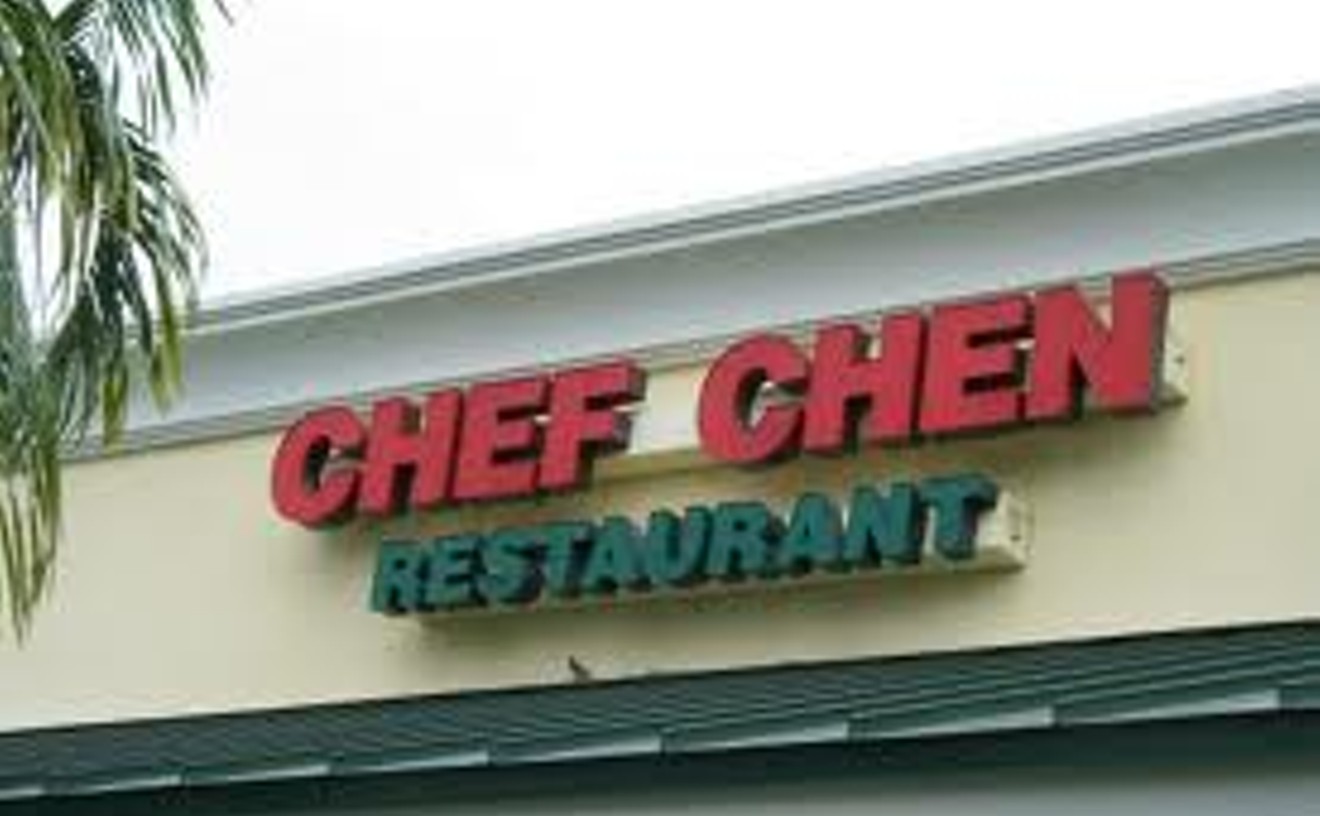 The history of the won ton dates to ancient Chinese times, and since then, people have had to choose their soup: egg drop or won ton? Well, maybe it hasn't been that long — but it is a problem. Do you order the rich, thick egg drop or the savory won ton? If you go to Chef Chen's, you won't have to decide. Here they serve an egg drop/won ton combo with wispy threads of egg plus freshly made dumplings. And it's cheap: A quart costs $3.25, a pint just $1.80. Hours are Monday through Thursday 11:30 a.m. to 10 p.m., Friday and Saturday 11:30 a.m. to 10:30 p.m., and Sunday noon to 10 p.m. Deep in the heart of darkest Aventura, the intrepid explorer can find a treasure so sublime that many people have ... gasp ... thrown caution to the wind to seek it. Yes, it always has to do with cocoa. Krön Chocolatier has long been the favorite of the area's high-end chocolate lovers. The place not only sells your typical treats and truffles but also specializes in crafting standout gifts that will impress the worldliest connoisseur, your girlfriend, and even your Jewish grandmother. They also cook up life-size ladies' torsos and legs, in chocolate, for the cannibal or bachelor in your life who deserves only the very best. Don't forget to try the scrumptious cookies while you're there!

Abraham's Bakery has an oversize snack cake that puts the d in decadent. Called a Yodek, it's rather like a Ho Ho that's bigger than your head. For $8.50, you get one of these meatloaf-size logs of supermoist chocolate wonderfulness. Stare in wonder at the thick squirt of sweet white buttercream dancing down the center of the cake from end to end. A curtain of rich dark chocolate covers the whole thing. You'll want to pick it up and eat it with your hands, but even a fairy would have enough manners to use a fork. No knife necessary.

Opened in 2006, Cafetto is a French-style coffee shop with a local flavor. On any given morning, owners Anne-Marie and Oliver can be found behind the counter serving freshly roasted java while chatting up the mostly local clientele. There are eight coffee flavors to choose from, including Jamaican rum, tiramisu, and cinnamon. There's also an ample selection of teas and natural freshly squeezed juices. The darkly lit main room gives the place the perfect vibe for sipping an espresso macchiato ($1.40) or a small cappuccino ($2.50), which comes with standard milk or organic lactose-free soy. To make things sweeter, Cafetto is one of the very few spots on the Beach offering free wi-fi, while the ample, comfortable seating makes it the ideal place to simply sit back and watch the world go by.

Key West by the Gables

Grease, library paste, and pencil erasers. Yum! Well, these seem to be the ingredients in most conch fritters around here. But not at this cute little eatery that channels the funky Keys next door to haughty Coral Gables. The golf-ball-size beauties (costing eight bucks for six) boast remarkably light interiors and crisp, greaseless, fetchingly bronze exteriors. Subtly flavored with scallions and red pepper, the shards of Bahamian conch are pleasantly chewy but don't require hours of unpleasant mastication. No hair on your palms either!