Everyone in this neighborhood knows the Jamaican-born Cliff, who has been cooking up a storm in his ramshackle roadside restaurant since 1986. It's difficult to find anybody around here, in fact, who hasn't sat down at one of the stools lined along a counter and dug into curried shrimp, stew peas, pork chops, cow feet, or other West Indian specialties that Cliff's crew does just right. Lunch specials include any of the aforementioned, with pigeon rice, steamed cabbage, fried plantains, and fruit punch or lemonade — for a downright neighborly sum of $5.50. The same price brings a breakfast of yam, banana dumpling, and callaloo, but we haven't even mentioned the really lip-smacking stuff found at Cliff's: curried goat with a devilish ginger-masala kick, and barbecued and/or jerked chicken and pork ribs that get slow-cooked in a black barbecue smoker outside. Ask for the hotter barbecue sauce, which is perked with piquant Scotch bonnet chilies, and request a Red Stripe Beer to chug along. You are set. Cliff's roots, rocks, and reggaes on weekend nights, when giant speakers gush island music until 3:00 a.m 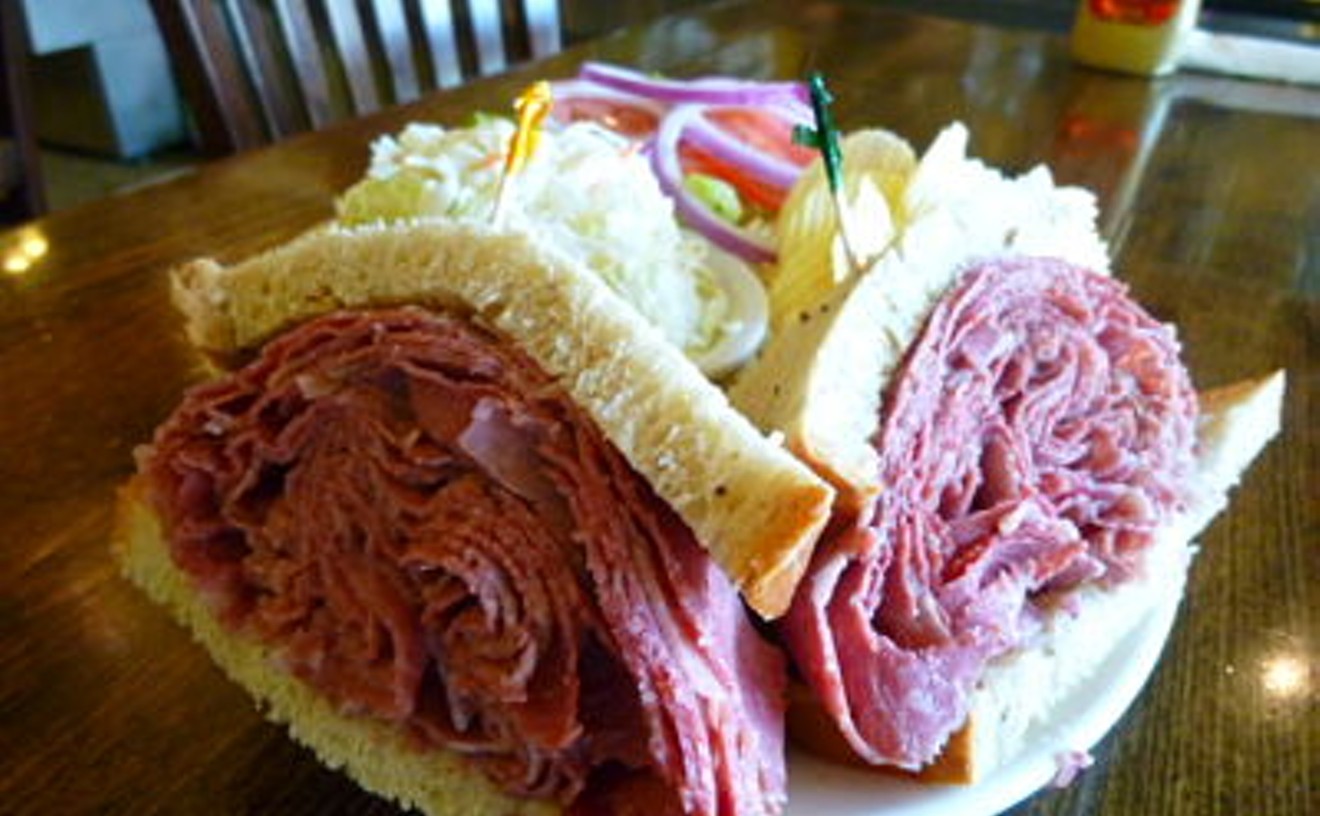 It's all about the pastrami. In Miami, the word "deli" is used to refer to almost any eatery that has any kind of food behind glass counters. But New Yorkers know that "deli" doesn't merely mean a place. Deli is also a food group. And the assumed word preceding it is "Jewish." When you eat deli, you're talking pastrami, corned beef, brisket, all-beef franks with sauerkraut, odorous housemade sour and half-sour pickles, "salads" (like potato and macaroni, not mesclun; cole slaw is as green as it gets with deli), and a belly-busting assortment of the tasty carbs that nineteenth-century Jewish immigrants from Eastern Europe brought to America: potato pancakes, knishes, kasha, crusty caraway-seeded rye bread, and so on. The almost-two-year-old kosher deli Sam's has all these items, and the meats are especially terrific. Corned beef and brisket are both homemade. And while the pastrami isn't (because it requires a special smoker), it's prepared according to the deli's own recipe, resulting in a product that, like good Cuban food, is beautifully spiced but not at all spicy. Both corned beef and pastrami come either lean or regular — the latter meaning properly fatty (the extra flavor is well worth the cholesterol, though pricey: $21.95 per pound versus $17.95 for regular meat). What Sam's hasn't got is smoked fish. But since Arnie & Richie's, just a block away, has fabulous nova, pickled herring, and so on, the absence is not annoying. After one of Sam's mega-size sandwiches ($11.99 for pastrami or corned beef, $.99 more for lean; $12.99 for brisket), diners could use the walk. 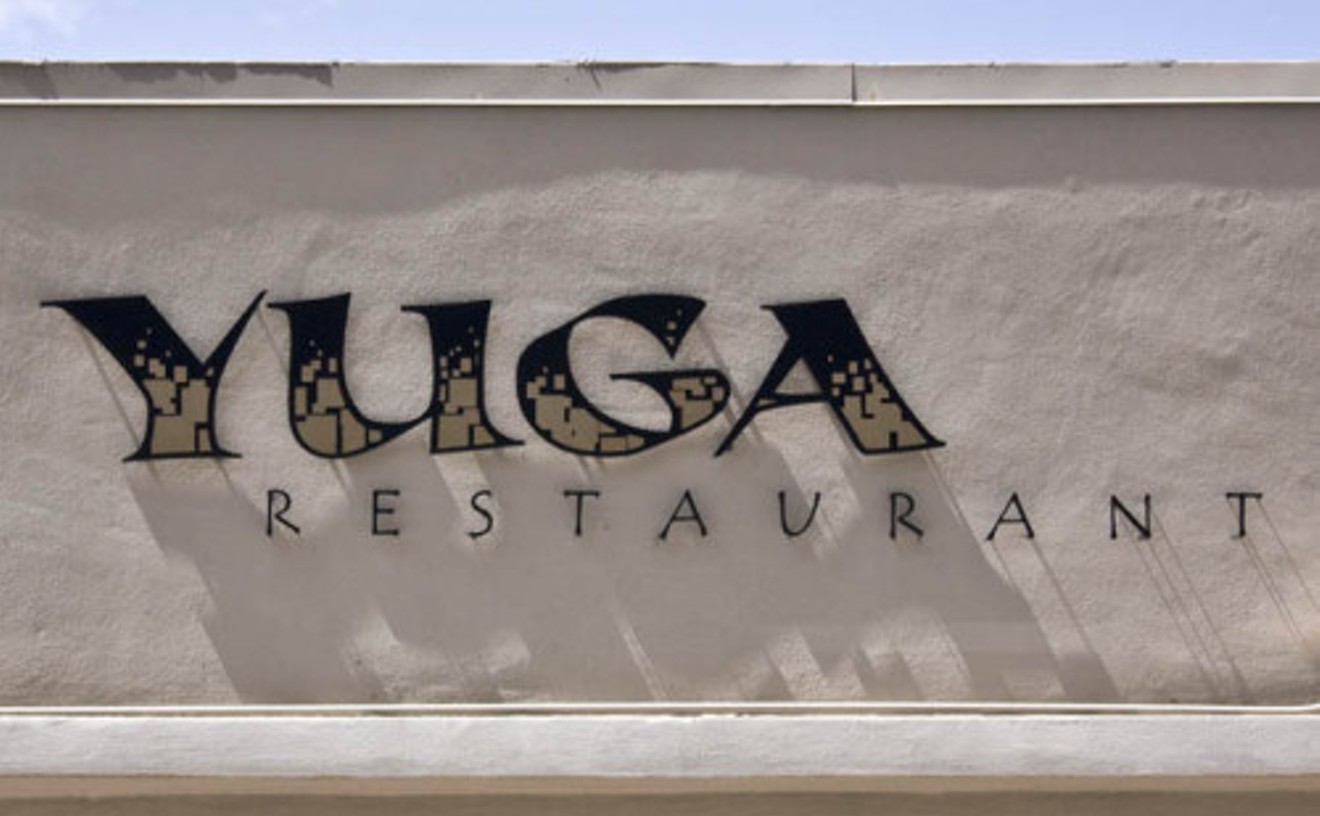 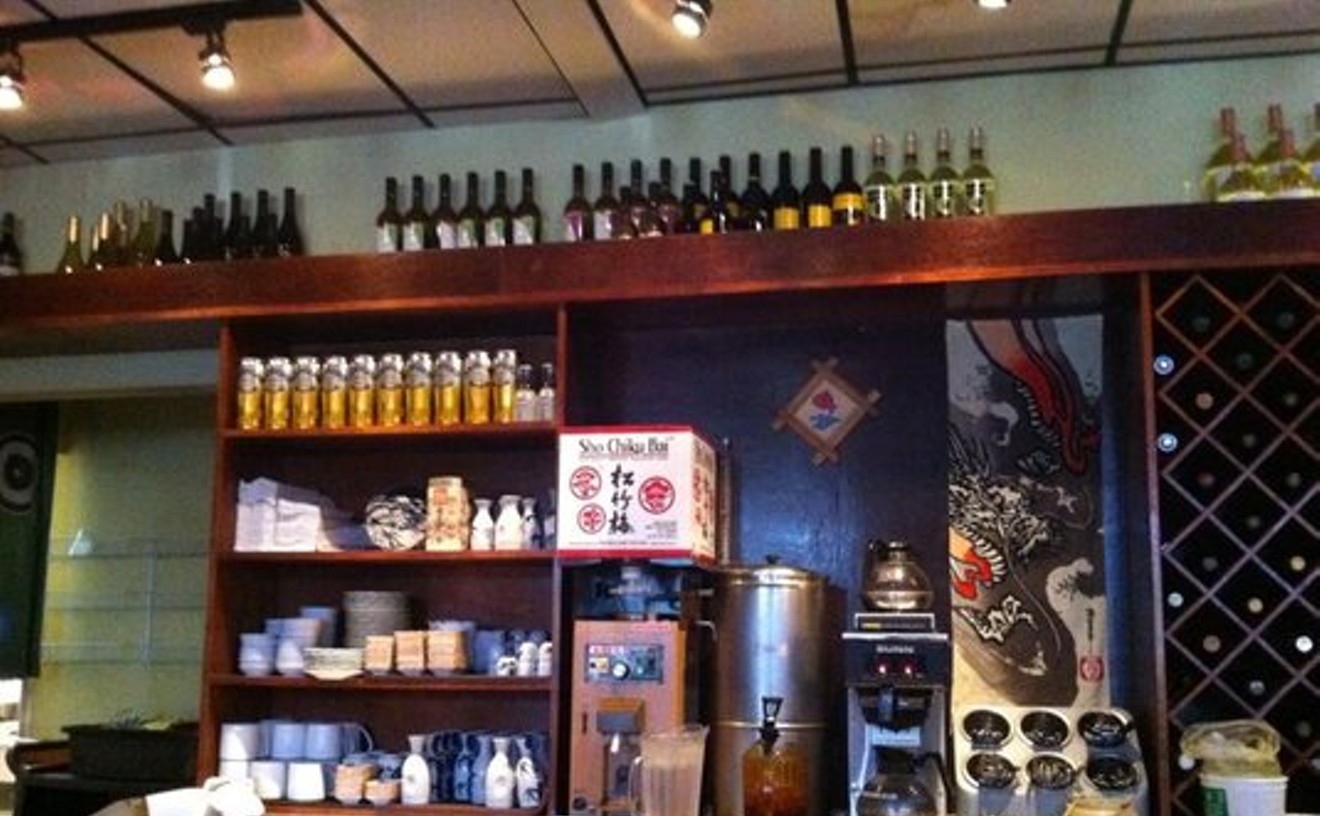 Yes, there are plenty of swank and sleek sushi joints on the beach, with low lighting and creative hand rolls. But sometimes all you want is sushi, and lots of it. California rolls have become the comfort food of the 21st Century, and at Tokyo Bowl — a small restaurant with big flavor — you can get waaaay comfortable in a roomy booth and order all the rolls you want. For $14. That price also includes soup and salad and a small dessert. All of the staples are here: octopus, eel, tuna, tempura. Service is efficient, competent, and friendly. Ambiance is laid-back, with soft jazz and a wooden Buddha or two smiling down on your tekka roll. If you can't wait around, there's takeout and a drive-through window. And a word about the dessert: Try the fried cheesecake roll. We were skeptical, but the oozing, creamy brown-sugar-cheese mixture was almost orgasmic. In a comforting way.

Best Place To Pick A Peck Of Pickled Peppers

George Martinez
Actually this is the best place to pick a peck of all sorts of specialties from Mother Russia, which is why immigrants from the Old World flock to this deli/grocery from several counties away. They come for the herring, halvah, kasha, caviar, candies, kefir, smoked fish, sundry sausages, Georgian wines, and Baltika beer. And they are also drawn here for various home-style lunches, which are heated up and served at a smattering of tables in the front of the market (there is additional seating outside). These are big, hearty foods such as stuffed cabbage, stuffed peppers, pork steak in brown sauce, fish croquettes, blintzes, a divine beef stroganoff, and the drool-inducing duet of Russian dumplings — vareniki and pelmeni. Pass the sour cream, loosen the borscht belt, and save some appetite (ha!) for pan-fried, puck-shaped, sweetened cottage cheese cakes called sirniki. Many items are under $10, which makes this Little Kiev's biggest bargain. 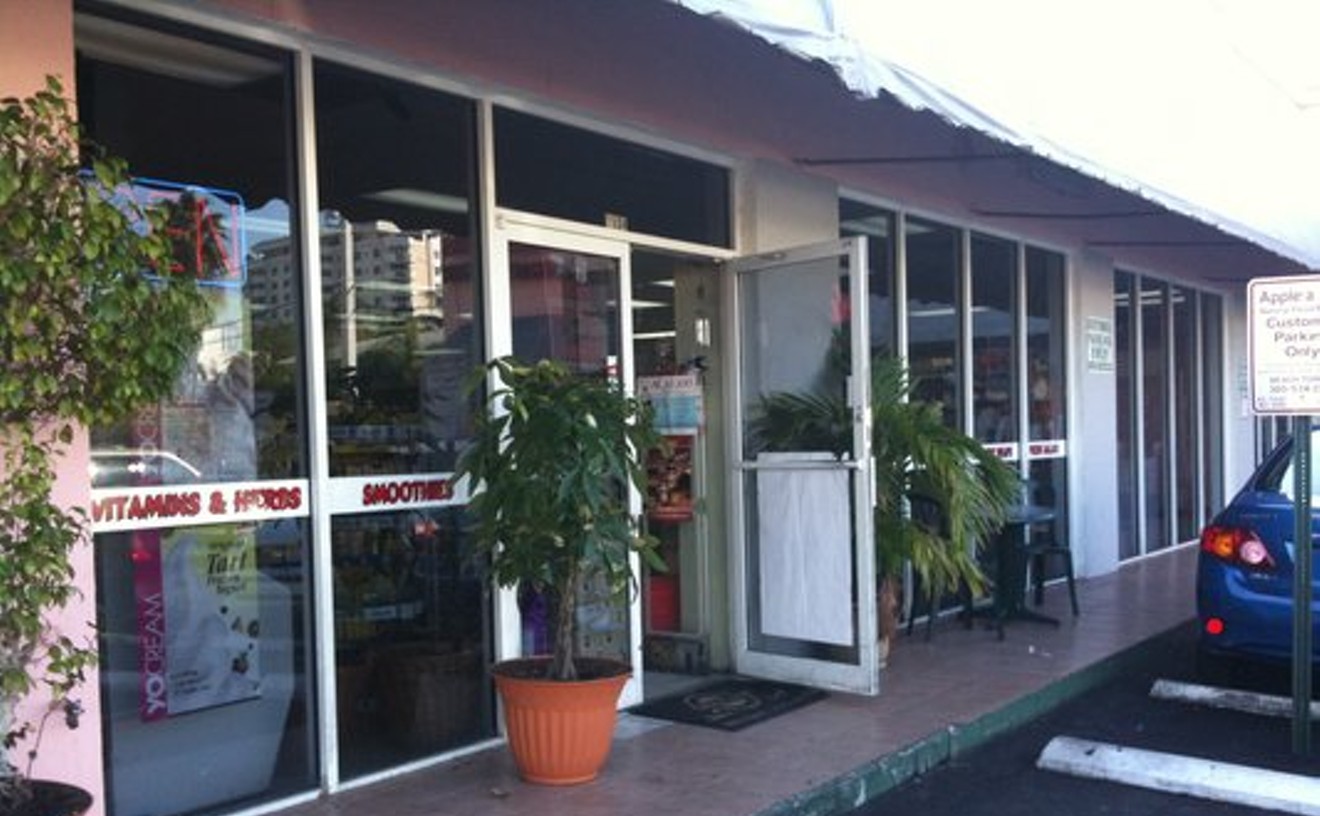 There are two types of health food stores in this world: Giant chains with lots and lots and lots of goods, and small, privately owned places with much less stuff. So why choose the latter? For the personal touch. For the laser-beam focus on truly nutritional foods, not hamburgers and Häagen-Dazs masquerading as such. For integrity, goddammit. Apple-a-Day Natural Food Market has been serving the South Beach community for fifteen years. Their soups, salads, smoothies, and vegetable juices can go mano a mano with those of the big guys, and nobody can top the signature marinated tofu sandwich with hummus and vegetables — $6.95 with a cup of soup. But it takes more than an apple a day to keep the doctor away — the aisles of vitamin and supplement products here comprise the most extensive selection in town. So raise a glass of soy milk to the little health food store that could.

Ten Incredibly Interesting (and of Course Pristinely Fresh and Delicious) Presentations of Raw Fish in Various Guises That Su-Shin Izakaya Serves but the Wimpy Sushi Joint That You Make a Habit of Going to Does Not:1. Maguro Yamakake: Tuna atop sliced mountain potato ($10)2. Roscoe Roll: Eel, cream cheese, and asparagus, wrapped in rice and seaweed and fried ($6.50)3. Blue Island: Crab, avocado, lettuce, and masago splashed with tosazu vinegar and rolled in cucumber ($6.50)4. Kurage Su: Marinated jelly fish and cabbage ($6)5. Karashi Conch: Raw and spicy ($6)6. Uzukuri: A selection of raw, thinly sliced fish with ponzu or cilantro vinaigrette ($10-$18)7. Tako Butsa: Thick cuts of octopus sashimi ($9)8. Myoto Roll: Japanese mint and pickled plum ($3.50)9. Teppo Roll: With a cooked Japnese squash called kampyo ($3)10. China Dog: Hand roll with raw spicy beef, daikon sprouts, and sesame seeds ($3.50 — and yes, we know this doesn't have raw fish in it, but we like the name)Amazingly the nonsushi Japanese menu here is even more intriguing.

This is the prettiest food market at which to shop — like an old-time general store, but bigger and with better lighting. Serene classical music and dazzling produce grab attention as you first enter, but the island in the center of the store is where the finest array of prepared foods is displayed and dispersed to grateful patrons. The extensive collection includes quiches, meat loaves, pulled pork barbecue, stuffed cabbage, carrot soufflé, sushi (rolled before your eyes), salads, and sandwiches (reubens to Cubans to Mediterranean-style panini piled up as if auditioning for some food shop in Milan). But what puts the Fresh Market into a league of its own is the stunning lineup of peerless roasted meats: glazed crown ribs of pork roast; plump rolls of herbed turkey breast; chipotle barbecue baby-back ribs so succulent that Shorty's is shaking in its cowboy boots; and five types of darkly bronzed rotisserie chicken — our faves being honey bourbon and whiskey sage. This is by no means an inexpensive shop, but many of the prepared foods are less extravagantly priced than you might think — chickens are $3.69 per pound, the aforementioned roasts $4.99 to $8.99 per pound. If all this isn't enough to put some pep in your step, grab a cup of some freshly roasted coffee at the complimentary dispenser up front. 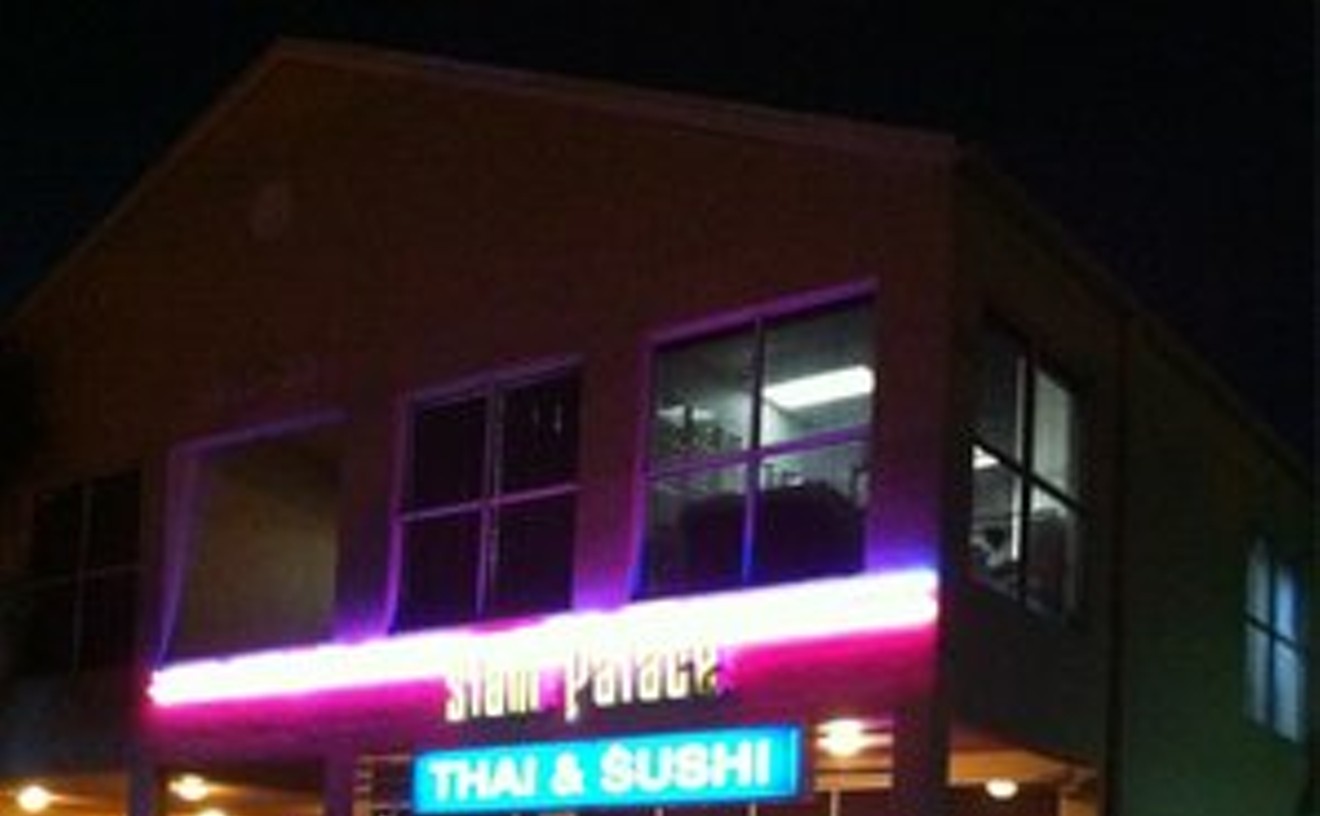 Siam Palace serves wonderful food in an elegant, relaxed setting. The dining room's rich golden tones and exotic flower arrangements make for a warm and friendly dining experience. Anything off the menu is more than likely to delight.Appetizers like vegetable-filled curry puffs ($5) or Thai spring rolls ($3) are light and aromatic. There's also the chicken ($7) or beef ($8) satay that you can warm over a small hibachi before enjoying with either a cucumber or peanut dipping sauce. Soups and salads are delicious and bursting with the bold flavors of Thailand — curry, coconut milk, and various spices.For the main course choose from vegetable, seafood, or poultry dishes. Beef panang curry ($15 for dinner) is sweet with coconut milk and ground peanuts, but spicy from its peppery sauce. Siam chicken ($14.50 dinner) is lightly breaded and quickly fried. It burns with chili but you won't want to stop the heat. Chef's specials are always a good choice; if you're lucky they'll have the shrimp in tamarind sauce ($17.50 for dinner).Don't get too stuffed, though, because desserts are amazing as well. Various exotic ice cream flavors are available, as are Thai donuts and fried ice cream. If you like fruit after dinner, make sure to sample the fried banana. It's lightly wrapped like a spring roll and served in small morsels covered in condensed milk with a side of ice cream.Readers' Choice: Moon Thai

This is a lifetime achievement award that you can win only once: our hall of fame of great local chefs, so to speak. Exclusive membership in this relatively new category is thus far comprised of just Norman, Mark, and Allen, each iconic enough to go by first name only. This year's inductees, Philippe Ruiz and Pascal Oudin, have been Miami's two finest French culinarians for many seasons now. Mr. Ruiz, from Saint Julien en Genevois, took over the helm of Palme d'Or in the Biltmore Hotel in 1999. Mr. Oudin, born and raised in Moulin, France, was executive chef at Dominique's Restaurant at the Alexander Hotel in 1984, served in the same capacity at Grand Café at the Grand Bay Hotel, and cemented his stardom when he started his own Pascal's on Ponce in 2000. Palme d'Or is the finest high-end French restaurant in town, and Pascal's on Ponce is the finest neighborhood French restaurant. Both chefs trained under Michelin-star legends in France, and approach their craft in old-world, no-nonsense fashion. Both are highly inventive, but adhere rigorously to classic French technique. Both possess peerless gastronomic knowledge, and a knack for consistently producing fresh, natural, intriguing, intensely flavored, sublimely delicious cuisine ... so elegantly! That's why both of them — Pascal and Philippe — are our two top chefs. 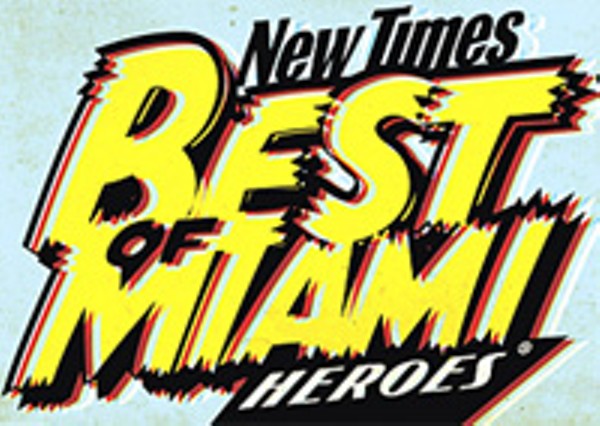