There will likely be a moment, perhaps as you pass through a mangrove forest into bright sunshine, when canoeing in the Upper Keys will qualify as pure, unadulterated bliss. It might happen when you've bailed out and are happily snorkeling among the coral, or while you're listening to a naturalist describe the flora and fauna of Lignumvitae Key. To access the beauty of this fragile environment, simply drive to Key Largo and put in at the end of Garden Cove Road adjacent to the North Key Largo Hammock State Botanical Site for an easily manageable day trip. You are now situated between Crocodile Lake National Wildlife Refuge to the north and John Pennekamp Coral Reef State Park to the south. The latter also offers a good launch spot, with the added bonus of showers and facilities. (If you head south from Garden Cove, beware bigger craft passing through the channel.) Follow the Atlantic's tidal flats as they give way to clear-water creeks full of snapper and snook. For individuals nervous about going solo or lacking equipment, Florida Bay Outfitters (305-451-3018) rents gear and leads half- and full-day trips in the area and further south. 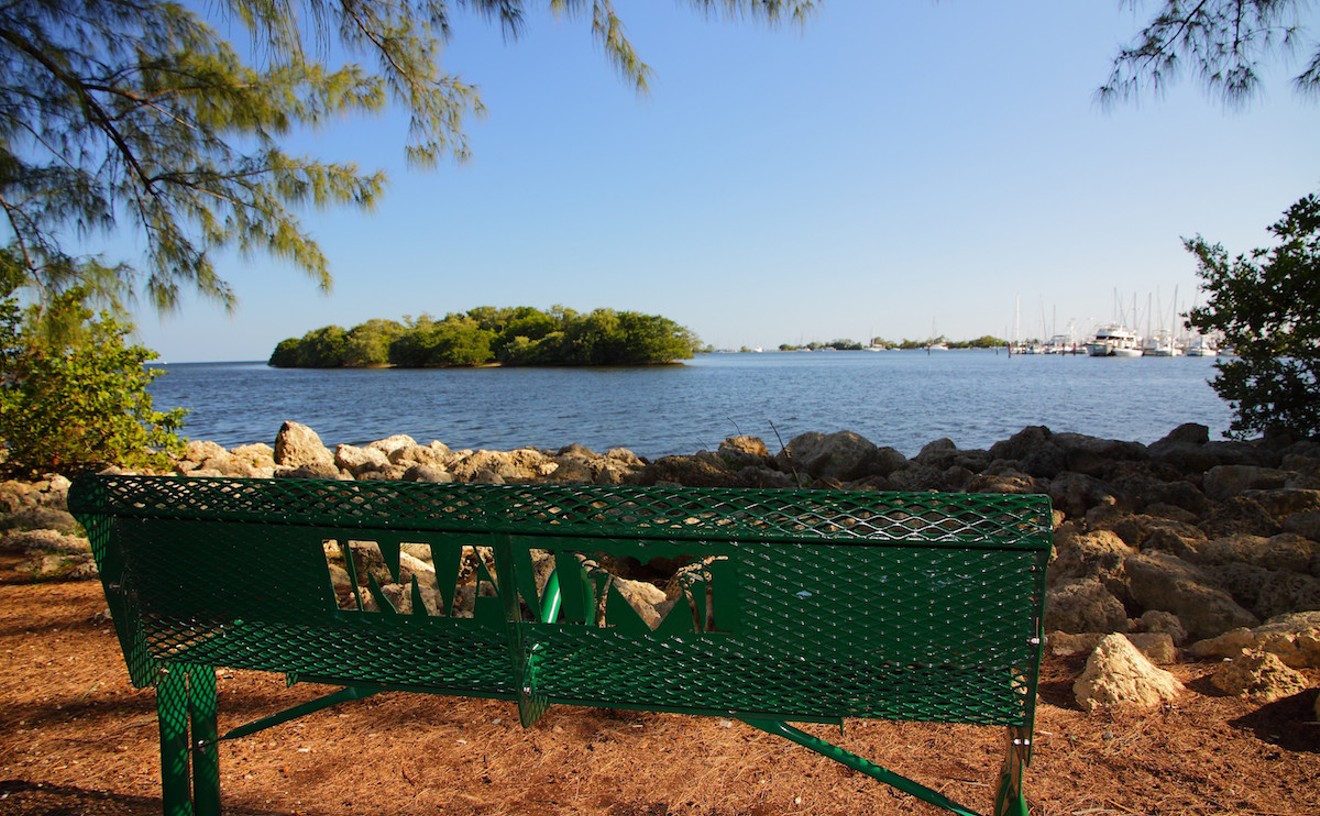 Courtesy of the GMCVB
This 21-acre city park on Biscayne Bay is so darn dog-friendly it features a new fenced-in, leash-free pooch playground. The dog park, which opened February 15, is big enough for ball throwing or disk tossing, and there's plenty of room for romping from sunrise to sunset. When work is complete, the grassy canine confines -- sponsored by Ralston-Purina, the Miami Department of Parks and Recreation, and the Humane Society of Greater Miami -- will boast water fountains and pooper-scooper stations. If your pup tires of all the sniffing and humping, the rest of Kennedy Park is perfect for a leisurely, but leashed, stroll. Woodsy areas on the fringes are freaky with wild-animal smells, green expanses, and a boardwalk by the water. Pack a snack, bring a good book, find Fido a stick to gnaw, lie back, and relax.

The best place to see hundreds and hundreds of birds of dozens and dozens of species doesn't have to be on the most obscure, hard-to-reach passage in South Florida. No, the very short, very accessible, very easy Anhinga Trail, just four miles inside the park, offers the most spectacular sightings around. Especially in drought years -- as this most certainly is -- and in winter, there may be no other half-mile in the entire nation that winds through such densely populated bird territory. The trail is a wide, wooden platform raised above the marsh, so alligators are no real threat to you, even if they are to the birds. Heron, egret, anhinga, and thousands of their cousins dive for fish in scattered pools that result from the dry season (in summer the marsh is flush with a layer of water, and the animals -- feathered, scaled, and shelled -- have no need to congregate so closely to feed). To intent eyes it is obvious the birds know they, too, could soon be dinner; they are supremely sensitive to any movement of a reptilian neighbor. On some perches the riot of color from the winged ones resembles a glorious splash of confetti thrown on a bush. Some species are native, but many others have migrated from the cold, landing in a bird -- and birdwatching -- paradise, if only for the season.

These days hipsters are eyeing Miami's Sixties motels with new appreciation for their soaring space-age appendages and extravagant neon lettering. Florida-tourist chic is stylish again. Can shuffleboard's comeback be far behind? This sociable sport once drew scores of visitors to the Sunshine State. People even considered the proximity of courts when hunting for a place to live. In those days, though, it was considered sluttish for a woman to wear slacks. Today in Florida, shuffleboard is mostly a sport for retirees and Canadians, and a decreasing number of them seem to have the shuffling bug. The Griffing Senior Citizens Center, one of the few spots here that still maintains an old-style shuffleboard complex, boasts 24 courts, with green-canvas tenting over wooden benches for shade between shots. The center recently resurfaced twelve of its courts. Membership costs an old-fashioned ten dollars per year, and you don't even have to be a senior. Learn what it feels like to get your butt whipped by an old guy and impress your friends with the sport's esoteric terminology, like snuggle, play the kitchen, and set a St. Pete.

Tired of dodging blue-haired ladies, aggro skaters, and pink poodles on Lincoln Road? Sick of nursing festering knee scabs and raw elbows, no doubt garnered when, on a nice leisurely skate, the asphalt below suddenly resembled a San Fransisco sidewalk after a level-nine earthquake? Must one drive to paved-over Kendall to Rollerblade without mortal fear? Not that we doubt you possess the ripping skill it takes to be a fierce Rollerblader on Miami's dicier streets, but perhaps for a change you'd enjoy some plush paths and posh scenery. On or around Twentieth Street and North Bay Road, the shady tree-lined streets begin to reveal how the other half lives (unless, of course, you are the other half). While wheeling by, get a load of the architecture and landscaping. How nice the street is -- nothing but smooth rolling ahead (take care crossing Alton Road; otherwise it's like buttah). By the time you reach La Gorce Island, you'll be relaxed, exercised, and probably a bit envious. Most important, you should still be in one piece.

Graceful dreadlocked dunkers, court hustlers, and boys as skinny and loose as spaghetti noodles make pickup basketball a thing of fierce beauty at this Miami Beach park. The action is brutal, the competition rough, and the two outdoor courts are lit at night, a prerequisite for basketball in steamy South Florida. Flamingo Park usually is packed with game. For that reason, some players prefer to hoop it up at Miami's José Martí Park (351 SW Fourth Street), where there usually are vacant courts, which also light up at night. But for action Flamingo rules. The play is sloppy sometimes, and the crowd gathered around the edges lets the players know it. But sometimes it's brilliant. When that happens, there is a moment of appreciative silence. Then the disrespecting begins again.

The sea is cool and relatively calm, and visibility is clear on a Saturday in March. The coral reef in this 5.3-square-mile sanctuary is vibrant with life, thanks to twenty years of protection from spearfishing, coral collecting, and lobstering. A diverse marine society -- sea turtles, sharks, barracuda, tropical fish, crustaceans, and eels, just to name a few -- roams this surreal city of colorful coral architecture. There are rock ledges up to 35 feet tall, large sea fans swaying slowly with the tide, and staghorn coral that resemble fantastic castles -- all visions from a dream. Bahia Honda State Park offers trips twice daily on a glass-bottom boat. For $24.95 you can snorkel for about an hour and a half. Gear costs extra.

Best Escape To Another Time

Along a winding stretch of West Dixie Highway, in the condo and strip-mall enclave of North Miami Beach, sits the oldest building in North America, a twelfth-century monastery originally erected in Segovia, Spain, and moved to South Florida in the mid-Twentieth Century by newspaper magnate and yellow journalist William Randolph Hearst (the same guy who brought us the Spanish-American War). Not as popular a tourist destination as, say, Vizcaya, and still a functioning house of worship (Episcopalian), the monastery's stone cloisters and parterre gardens continue to offer refuge from worldly pressures. Admission is five dollars, but look at it this way: Eight hundred years ago, it would've required a vow of celibacy.

Frolicking in the ocean at sunset

As light begins to fade from the sky, jump into the sea and indulge yourself in a mind-altering experience that would make Timothy Leary proud.

Plunge into the warm water and imagine that Yemaya, Santería goddess of the ocean, is pulling you safely to her bosom. Let the waves suck you up and shoot you forward while jets of water tickle your ribs. Tumble head over heels toward shore in a bubbling froth of spume. The sea reflects the blazing light show as the sun sets. Look to the horizon and envelop yourself in a swirl of light and color. Let a white crest of water slap you senseless, then float with the current and call out to the seagulls.

To capture the full effect, stay in the water until stars appear in the deepening blue twilight. Watch the clouds change from gold to orange to pink within minutes. Take a breath, shout, become one with the universe. The experience will open doors of perception without killing any brain cells.

Best Reason To Go To The Everglades

Because it's still there

Raised not 50 miles away, and sadly, as of last year, she could still count on one hand the number of times she'd been to the national park and its surrounding wild areas. Since then, though, she's been making up for lost time, exploring what she soon could be missing. She's bumped along Loop Road with only the vultures for company; airboated the vast River of Grass with the gators; set up a tent at land's end in Flamingo; kayaked along shore with the seabirds; watched from a canoe, near the shrieking rookeries, as the moon rose while the sun set; visited the Miccosukee Village with its bare wooden planks jutting into the swamp and scanned the museum's black-and-white photos of the land from back when it actually was a three-million-acre native wilderness. She's been overtaken by a sullen sense of peace. She's bought the $25 pass that allows unlimited entrance throughout the year. She knows it's late, that the parched ecosystem is shrinking and shriveling, that the invasive melaleuca trees are flourishing, that many threatened and endangered species are struggling to survive, that there is about one bird for every ten that roosted there a century ago, that the government will spend eight billion dollars over the next several decades trying to fix its manmade mess, that activists and scientists are skeptical of this plan, that eight billion dollars is one expensive Band-Aid, and that right this very moment, still, it is all unbelievably lush to her eye.