Meet Whithervanes, the Public Art that Tells You How Bad the News Is Today 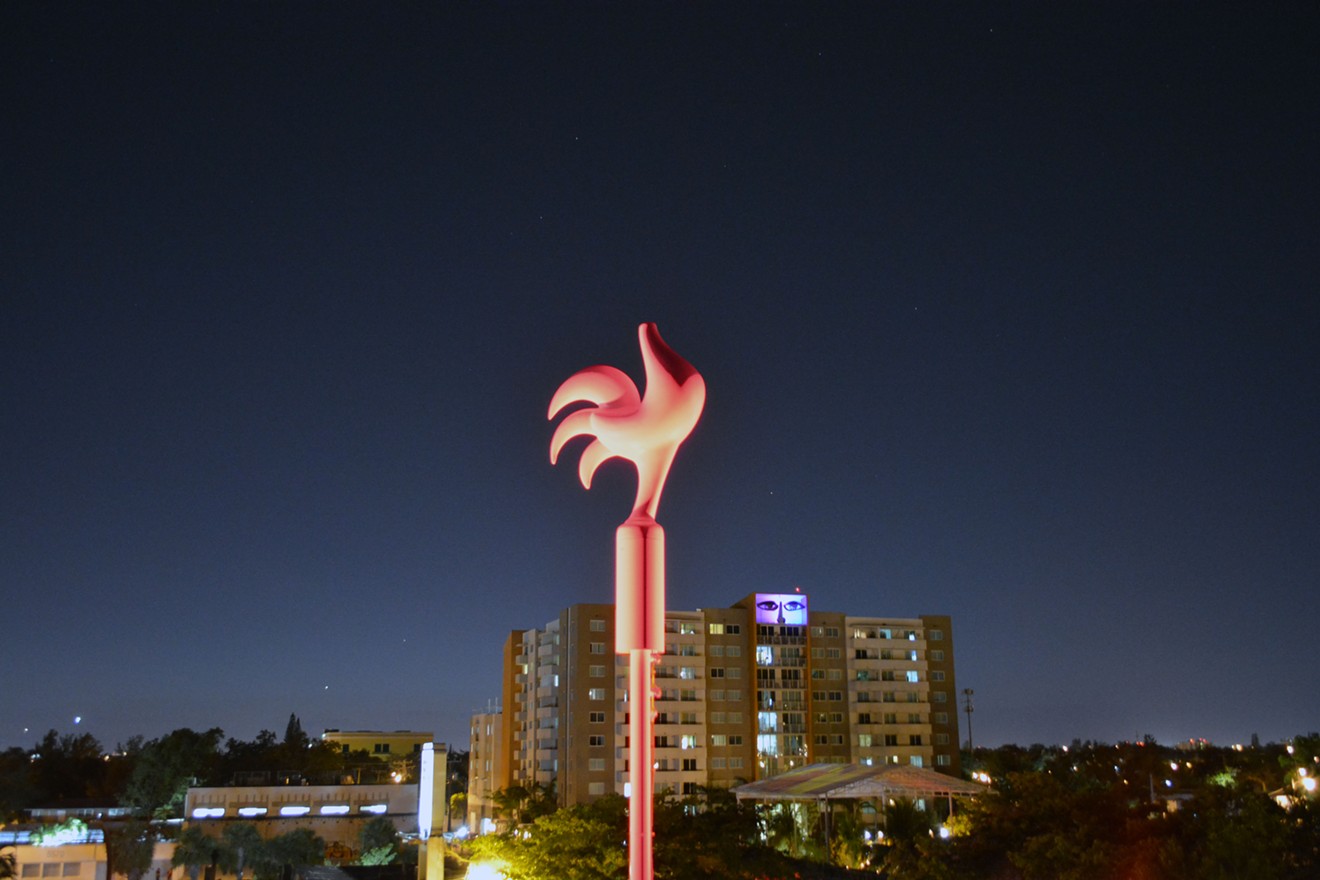 Courtesy of Rootoftwo and Locust Projects
Look up in Miami and you'll see rows of empty luxury condos, strip club banners flying through the clouds, and, now, three headless chicken sculptures. These latest additions to the Magic City skyline are part of Whithervanes: A Neurotic, Early Worrying System, brought to us by Locust Projects. The Detroit-based design studio Rootoftwo was commissioned by Locust to bring the Knight Arts Challenge-winning installation to town after versions were executed in the United Kingdom and France.

"It’s a perfect fit for what Locust is doing," says Lorie Mertes, executive director of Locust Projects. "It’s pushing practice in terms of media and technology at the intersection of art and science and tech in an experimental process."

It can be difficult at first to understand how a trio of decapitated birds does all of that. Essentially, the pieces in Whithervanes are modern versions of the weather vanes that once told primitive sailors and farmers the direction of the wind and thus offered a sense of weather patterns. The gadgets are mostly used as kitschy lawn decorations now.

In the case of the Whithervanes, the "weather" that dictates the movement of these rooftop ornaments is what Cezanne Charles, one-half of Rootoftwo, calls "the climate of fear on the internet." The sculptures are connected via ethernet cables to international news agency Reuters' feed. The chickens scan articles for words and phrases from a list compiled by Homeland Security, which uses those same words to screen for possible "threats against the U.S." on social networking sites. The birds can determine the source of the news and, depending upon how alarming the content, will spin away from the article's location and change color. The colors mirror the threat levels defined by Homeland Security as well.

This concept might seem vaguely cruel. But as Mertes points out, "None of us, really, are immune to being informed," because almost every platform on the internet has become inundated with seemingly endless scrolls of information. Amid the onslaught, it's easy to feel like, well, a chicken with its head cut off.

"We’re almost in a constant state of alert," Mertes explains. "We’re the ones being turned by what’s in the air."

But Whithervanes aren't just a nod to the weather vanes of old, which often depicted fowl, but also to the children's fable Chicken Little — the tale of an anthropomorphic chicken who believes the sky is falling after an acorn lands on her head. Whithervanes are similarly attempting to convey a cautionary tale of gaining perspective.

"For me, this project is about how art and artists can visualize and interpret data in a way that makes it tangible in terms of its meaning and its impact," Mertes says. "The next part is about how you respond to the data that all of us are constantly fed. The Whithervanes are about giving us agency about how we respond. It’s meant to get us to stop for a moment, slow down, and see things differently or think about [them] in a new way."

It goes like this: You see a Whithervane in any of its three locations — the MiMo District, the Design District, or downtown. Maybe it's bright red and spinning wildly. With your phone or any other mobile device, you can access whithervanes.com and see the story to which the bird is responding. From there, you can choose to fuel the flames by pressing #skyfalling, which heightens the "ambient fear." You can also press #keepcalm, or lessen the threat level of the offending article. The Whithervane's color and movement change based on these submissions as well as tweets to @Whithervanes.

It's tempting to imagine that our own anxieties regarding fake news and gun control could be this easily quelled. By design, the Whithervanes don't provide a solution to the doom-and-gloom forecasts of contemporary news. Much like their predecessors, they simply give us a gist of what's out there — there's no telling if the wind will bring a cold front or a heat wave. Instead, the Whithervanes remind us that our approach to this climate is something we can play with. In fact, it seems to be almost an obligation for us to experiment with our engagement in dire times. How else can we find our place in an environment as constantly shifting as this one?

Mertes, in the truly playful and polysemous spirit of the Whithervanes themselves, encourages Miamians to "keep looking up." For now, at least, the sky isn't falling.