Kids explore the Phillip and Patricia Frost Museum of Science. Courtesy of Frost Science
As a parent still in charge of younger kids, you may feel metaphorically smothered by your children on holidays dedicated to partying — much like you are literally smothered by them during snuggle sessions and eternal-seeming horseplay. These small, screeching creatures you love with all your heart are the only thing standing between you and a good time.

Since the sitter already made plans and picked out her finest hoochie gear for New Year's Eve, you have to figure out what you and the little ones are going to do as a family on December 31. Luckily, you have options. Whether you want to suck down some apple juice during an afternoon ball drop or ring in the new year near a canoe, check out these suggestions and get planning. 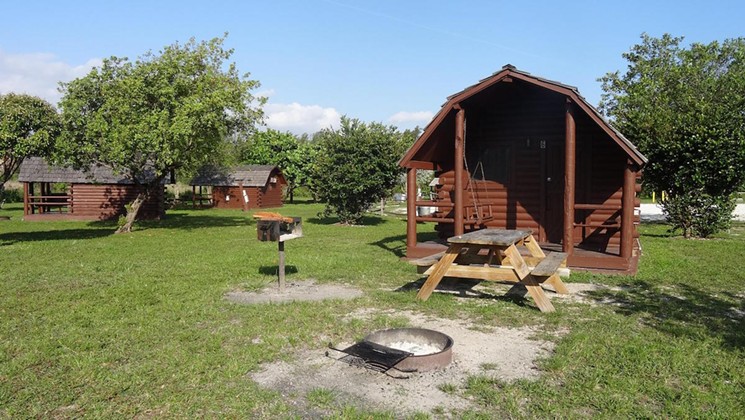 Clear skies above Oleta River State Park.
Courtesy of Florida State Parks
For outdoorsy types: So you want to take your kids somewhere to see the fireworks but not lose them in a crowd of drunken tourists. Why not plan a local camping trip and enjoy the great outdoors? Try New Times' 2018 Best Campground spot, Oleta River State Park, where a cabin will only put you out $55. 3400 NE 163rd St., North Miami Beach; 305-919-1846; floridastateparks.org. Zoo Miami's residents opening a "present."
Courtesy of Zoo Miami
For animal lovers: Zoo Miami has a thing called Gifts for the Animals all month long. On New Year's Eve, you can catch zookeepers presenting holiday gifts to the orangutan crew at 11 a.m. and -mâché ornaments with treats inside to winged residents of the Flooded Forest Aviary at 1:30 p.m. 11 a.m. at Zoo Miami, 12400 SW 152nd St., Miami; zoomiami.org. Admission costs $18.95 for kids and $22.95 for adults.

For kids who turn into tantrum machines at bedtime: Let’s say your kid actually likes to sleep — or, more accurately, needs to. Without sleep, she gets angry. And that's fun for no one. You can bring the New Year's Eve-ish experience to her early in the day, thanks to a couple of local kids' museums.

At Young at Art Museum in Davie, Noon Year’s Eve turns noon into midnight, letting your kids get drunk on dancing to DJs from Jammin Express Entertainment. They can also get messy with hands-on activities, and be in bed at whatever time you have convinced them is normal. 10 a.m. to 4 p.m. at Young at Art Museum, 751 SW 121st Ave., Davie; youngatartmuseum.org. Admission costs $14. 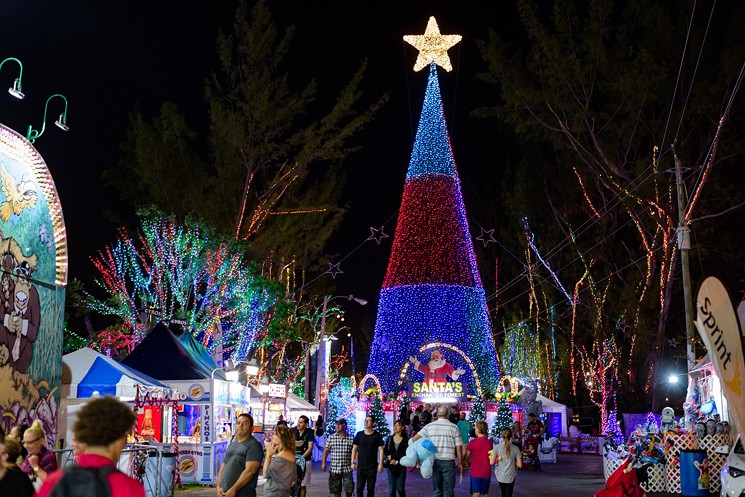 Santa's Enchanted Forest's magnificent tree covered in multicolored lights.
Karli Evans
For cranky teens: Maybe your kids are now pubescent meanies whose every other sentence is, "I hate you, Mom!" Here are two routes to eliminate that line from their vocabulary: Dave and Buster's and Santa's Enchanted Forest.

If you’re not uptight about screen time and don’t insist your kids fall asleep at dusk, then hit up Dave and Buster’s New Year’s Eve party at Dolphin Mall. The party starts at 8 p.m. but is entirely kid friendly. The cost may be steep, ranging from $34.99 to $109.99, but it includes a buffet and soft drinks, unlimited video games, a DJ, photo booth, a freaking fortuneteller, balloon artist, kid-appropriate party favors, and a magic show. 8 p.m. at Dave and Buster's at the Dolphin Mall, 11481 NW 12th Street, E622, Miami; daveandbusters.com/locations/miami. Tickets cost $34.99 to $109.99.

If you want to get a little wilder, hit up Santa’s Enchanted Forest for rides and lights galore. Your teenager might try to act too cool for Santa, but you know he loves it as much as everyone else in Miami. Besides, his friends are probably already there taking ironic selfies. 5 p.m. at Tropical Park, 7900 SW 40th St., Miami; santasenchantedforest.com. Admission costs $24.30-$33.64.
For those determined to party: So you've decided to enjoy some fireworks with the kids. You've got two great options, one in Miami and one in Broward.

At Miami's Bayfront Park, you can catch a big, funky dance party that runs from 8 p.m. to midnight and ends with the ascension of the Big Orange and a magical fireworks display. 8 p.m. Bayfront Park, 301 N. Biscayne Blvd., Miami; bayfrontparkmiami.com/NYE. Admission is free.

The Downtown Countdown in Fort Laudy includes a street festival with plenty of kid-zone stuff to do from 3:30 to 8:30 p.m., including a bounce house, face painting, games, line dancing, and a ton more. This party will usher in 2019 with a dropping illuminated anchor. The kids get their own 7 p.m. countdown, which involves the lighting of said anchor, on the main stage. Parents can chill to some live classic rock, funk, and R&B before the pyrotechnic display screams, "Happy New Year!" Downtown Countdown, 4:30 p.m., SW Second Street & SW Fifth Avenue, Fort. Lauderdale; fortlauderdale.gov. Admission is free.

Relatable content for parents everywhere.
Solis-Cohen, Myer
For those who simply cannot leave the house: Let’s be honest: You're tired. The idea of getting your kids dressed and out the door without shedding blood, all in an effort to "have fun," fills you with horror. We've got some homebody options for you.

One experienced parent suggested setting your clock back a few hours so you can celebrate midnight at 7 p.m. Then the kids can go to bed on time and not be tantrum-throwing banshees in the a.m. And before the clock strikes "midnight," you can turn your home into a rave. Set up tents, buy glow sticks, string lights up around the house, and play dance music to wear them out. Another idea? Turn your living room into a "movie theater." Make She-Ra even more gigantic and powerful by projecting her onto a sheet while sipping mocktails.

Another parent in the know shared a rad tip: Write down six group activity ideas and put them in different paper bags — like a puzzle or a freeze dance party — then open them every hour from 3 to 9 p.m. You can play for hours in an organized way and get everyone to bed early. Maybe even yourself.
KEEP MIAMI NEW TIMES FREE... Since we started Miami New Times, it has been defined as the free, independent voice of Miami, and we'd like to keep it that way. With local media under siege, it's more important than ever for us to rally support behind funding our local journalism. You can help by participating in our "I Support" program, allowing us to keep offering readers access to our incisive coverage of local news, food and culture with no paywalls.
Make a one-time donation today for as little as $1.