A Trippy Festival of Sex Positivity Lands in Miami 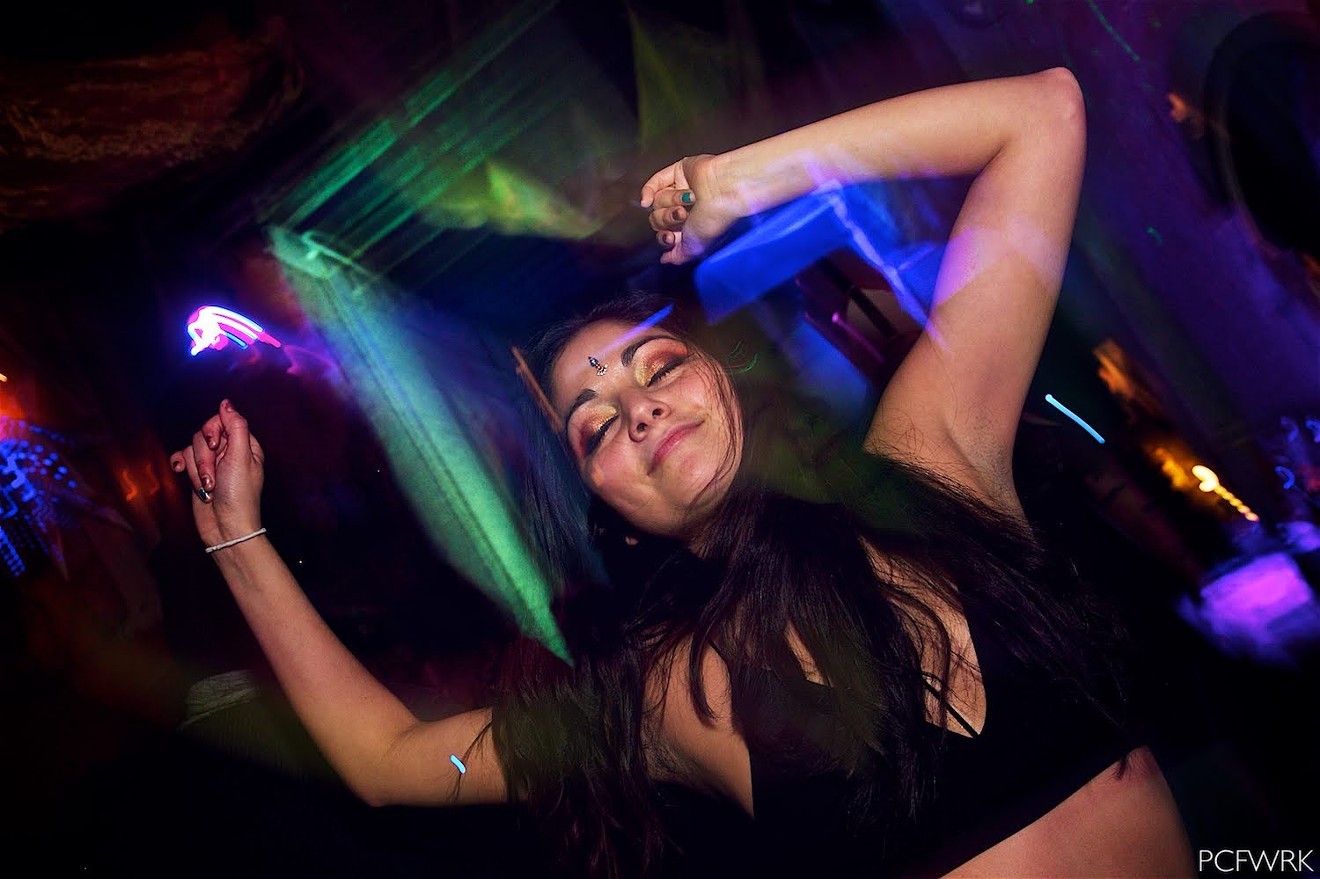 You cunt not dance! Photo by David Burch / @pcfwrk
Three years ago, at a branding retreat in Ibiza, a group of friends made up fake yoga classes with mantras like "breathe into your comic cunt" and "turn your titties toward the sun." Those words, and their laughter, sparked an idea in yoga teacher, bodyworker, artist, puppeteer, and world traveler Frida Future.

Thanks to that Mediterranean meeting, she soon after gave birth to the Cosmic Cunt Conference, or Church of the Cosmic Cunt. It's a traveling arts project that has hosted more than 40 events worldwide, including at trippy Nevada music and arts fest Burning Man. Soon, it'll arrive at Miami gallery Space Mountain.

Future admits that the original joke was not for everyone, calling it a mix of "profanity and irreverence that makes you feel good." The first meeting was a dinner party where guests played "pin the egg on the ovary." Future says, "It was about pussy awareness." Beneath the inherent silliness of the party, guests were uncovering consent and boundaries issues and learning autonomy awareness and how to communicate about pleasure — a continued focus of the Church.

This church is cosmic in part due to Future's acid trips. "Psychedelics are big in the creation of this project," she says. "There's this awareness that the regular way of thinking about things is only part of the story. There's this underlying thing that we don't usually acknowledge in everyday life." Through the Church, she's effectively spreading the gospel she discovers while under the influence. "There is this whole other aspect of energetic awareness that we can tune into and feel our pleasure and use our bodies as this metric of awareness." 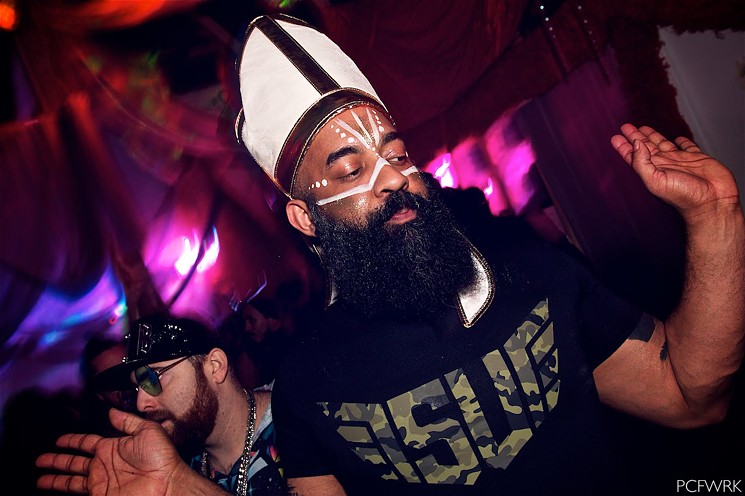 Embrace the pussy power.
Photo by David Burch / @pcfwrk
Art has always been a part of the Church of the Cosmic Cunt — and much of it relates to vulvas, as you can imagine. At the conferences, hosts have provided canvases and paints for attendees to explore their own creative visions. But a curated gallery show like the one coming to Space Mountain is a new endeavor for the Church.

Future works with a wide cast of characters who co-create with her. Sarah Penello and Bethani Zeller are her Miami "co-priestesses" who planned the Miami pop-up, titled “A Juicy Welcome to the Church of the Cosmic Cunt.” They are bringing people from other "cuntfrences" all over the country to participate.

The programming is as cheeky as it gets. There's a "CUNTfessional Couch/Radical listening space" where participants can sit on a giant stuffed vulva while a nonjudgmental ear hears your thoughts. There's the Chapel of Light and Infinite Tenderness, or CLIT, a rebirthing portal that is both a figurative and a physical installment. Future says it's an opportunity to reconnect with your pelvic floor. Visitors can also take yoga classes, enjoy sound healing, church services, a drag queen-led clothing optional body positivity workshop called Tits and (M)ass, and a sex-positive storytelling circle, "CUMmunion." You get the idea. (All genders are welcome — apparently pelvic floor exercises benefit everyone!) 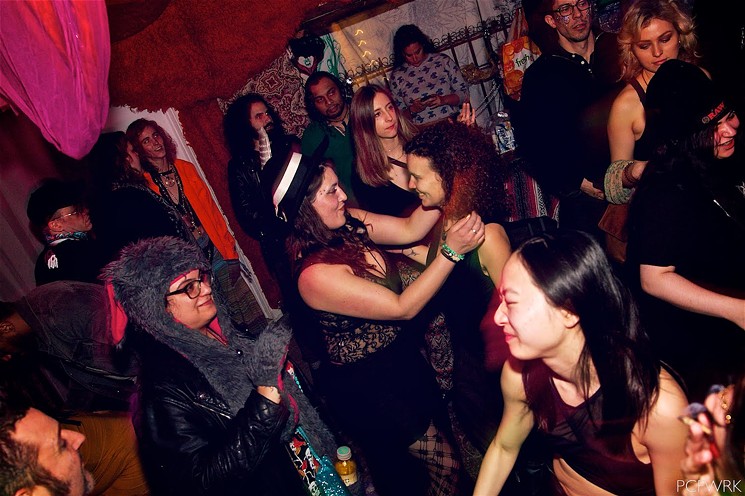 Pussy party.
Photo by David Burch / @pcfwrk
"It's an opportunity to feel things that maybe you don't usually get to feel," Future explains. "So much of life is about shielding your vulnerability. So when you come into these ... deliberate, intentional spaces where people access their vulnerability, feel their feelings, they witness other people feeling their feelings without judgment or expectations — that's a total tuneup of the human experience."

Past events, she says, have been transformative for many visitors. One woman Future remembers realized in one of the Conference's talking circles that she had never said no to sex before — and not because she had never wanted to. She later told Future that when she told her boyfriend of three years "no," it led to a transcendent experience where they talked and cried all night.

"Your art is not something you get to when you're done with your to-do list. We're alive right now with this energy and frequency. Tap your passion and make what wants to come out of you," Future advises. If you want to take her advice and get transformed, you can worship the Cosmic Cunt, your own cunt, or your friends' for most of May at Space Mountain.

The Church of the Cosmic Cunt. Noon to 8 p.m. daily from Wednesday, May 8, through May 27 at Space Mountain, 738 NW 62nd St., Miami; spacemountainmia.org and thecosmiccc.com. Admission is free.
KEEP MIAMI NEW TIMES FREE... Since we started Miami New Times, it has been defined as the free, independent voice of Miami, and we'd like to keep it that way. With local media under siege, it's more important than ever for us to rally support behind funding our local journalism. You can help by participating in our "I Support" program, allowing us to keep offering readers access to our incisive coverage of local news, food and culture with no paywalls.
Make a one-time donation today for as little as $1.