The Phillip and Patricia Frost Museum of Science celebrates World Oceans Day on Monday with a special webinar hosted by Andy Dehart, vice president of animal husbandry and marine conservation at Frost Science. The livestream will touch on fun and informative topics such as how the Super Bowl and Finding Dory relate to ocean conservation. 2 p.m. via https://www.facebook.com/frostxcience.

On Tuesday, catch a Zoom screening of the 2017 documentary Behind The Curtain: Todrick Hall, at this month’s virtual iteration of Hôtel Gaythering’s monthly Cocktails and Cinema event. The documentary follows Hall, the YouTube-famous choreographer who has appeared on RuPaul's Drag Race and starred in Kinky Boots on Broadway, as he undertakes a full-scale, original musical about growing up gay in Texas and his quest for showbiz success. Presented by Outshine Film Festival, Pridelines, and the University of Miami's Health Promotion and Care, the event kicks off at 6:30 p.m. with a virtual happy hour and a game of "21 Songs Every Gay Knows." And don’t miss the post-screening Q&A, hosted by Hall and director and cinematographer Katherine Fairfax Wright. 6:30 p.m. via zoom.us.
From June 9 through 11, EarthX will celebrate Oceans Week with daily programming that includes talks, film screenings, and extended-reality experiences, all of which address solutions to the threats Earth's oceans face. Tuesday's talks are moderated by activist, artist, and presenter Danni Washington — the first black female host of a science television series — and feature a panel discussion with Monterey Bay Aquarium executive director Julie Packard, oceanographer Sylvia Earle, and other experts. 1 p.m. via earthx.org/earthxtv. 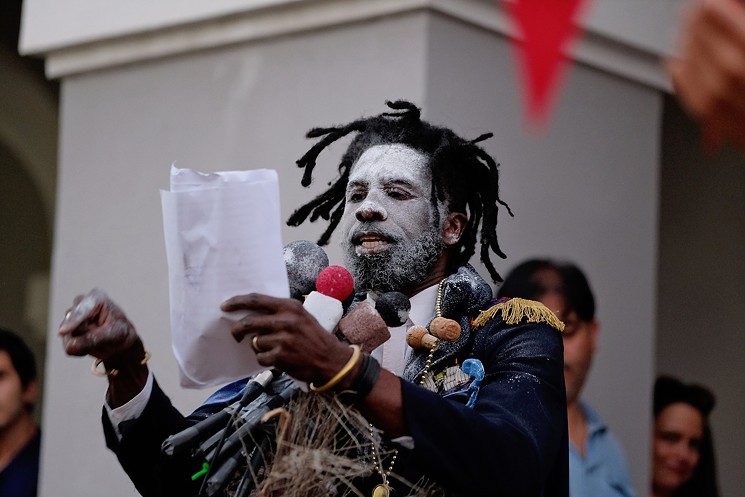 Artist Nyugen Smith during a performance.
Photo by Pascal Bernier
Hosted by artist Nyugen Smith and moderated by Pérez Art Museum Miami curator María Elena Ortiz, The Wave will livestream its second event on Tuesday. The series, presented by Indigo Arts Alliance and PAMM, aims to “create dialogue around the current and future impact of the pandemic on Black and Brown communities locally and globally.” Tune in to the conversation and presentation, which also features poet Nyamuon "Moon" Nguany Machar, journalist Trymaine Lee, and art historian and multidisciplinary creative Ciara Elle Bryant. Noon via facebook.com/perezartmuseummiami.

Chicagoan art-rock duo Ohmme will perform live on Pitchfork’s Instagram this Wednesday. The band is fresh off the release of its sophomore album Fantasize Your Ghost. The performance is part of the digital music magazine's "Stay at Home" series, which takes place on Instagram every Wednesday and Friday. 5 p.m. via instagram.com/pitchfork.

Civil-rights leader and current executive director of the ACLU of Florida Micah Kubic and professor of forensic studies David Thomas will lead RiseUp Florida’s next virtual talk, Beyond the Headlines: Justice in the Balance. The discussion will focus on police brutality, including assaults at the Goerge Floyd protests, and why President Donald Trump’s remarks have fed the problem. To participate in the Q&A, email [email protected]. 5 p.m. via facebook.com.

Rachel Lee Scherdin of Transition Pilates hosts Thursday's New Times Virtual Fitness Club session. In addition to being certified as a pilates instructor, Scherdin is a personal trainer, a triathlon coach, a versaclimber instructor, and a pre- and post-natal corrective exercise specialist. Take part in the free class for a restorative workout aimed at easing both your mind and body. 6 p.m. register via eventbrite.com.

Julien Ehrlich and Max Kakacek of Whitney.
Photo by Olivia Bee
Indie-rock outfit Whitney has partnered with the community-driven organization NoonChorus for a one-time-only live concert. The livestreamed event, presented in collaboration with the Fillmore Miami Beach, will raise money in support of Black Lives Matter; My Block, My Hood, My City; and the National Independent Venue Association. 8 p.m. via noonchorus.com. Tickets cost $20.

It’s June, and the annual celebration known as Pride Month is underway. As part of the festivities, every Friday the South Florida Pride Collective hosts a Pride Happy Hour in partnership with Morgan Stanley. The two-hour concert will stream through the Pride Collective’s Facebook page. 5 p.m. via pridecollectives.com.

Wynwood Pride won’t be able to match last year's three-day music-festival extravaganza. But this year the party goes virtual for a one-night multi-platform event. In solidarity with the Black Lives Matter movement, the celebration will raise funds for national bail organizations and local justice reform. On Twitch, catch headliners Sofi Tukker, Orville Peck, Kali Uchis, Caroline Polachek, and Big Freedia, along with lip-syncing battles, DJ sets, and celebrity appearances. Simultaneously, Instagram will be the nexus for exclusive interviews, set times, and more, while Zoom will offer participants a chance to virtually mingle with their fellow festival-goers. 7 p.m via twitch.tv/wynwoodpride, instagram.com/wynwoodpride, and zoom.us. 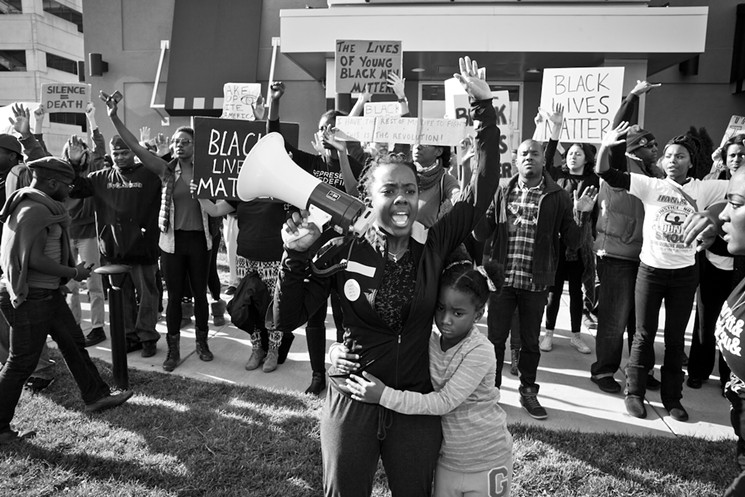 O Cinema and the Knight Foundation have partnered to launch free virtual screenings of anti-racist cinema. Thanks in part to Magnolia Pictures, Whose Streets?, a documentary by Sabaah Folayan depicting the Ferguson uprising, will screen for free on Sunday for 24 hours. The screening will be followed by a community-led virtual conversation on Monday. Starting 1 p.m. Sunday via o-cinema.org.

Emmy Award-winning actor Billy Porter and South Bend, Indiana, mayor and former presidential candidate Pete Buttigieg headline the latest installment of the Bass’ Curator Culture series. Sunday's virtual town hall will be moderated by O, Miami Poetry Festival chair Tom Healy. The program is a part of a two-year effort, in partnership with the Knight Foundation, to propagate public conversations about fostering creativity in a complicated social climate. 5 p.m. via facebook.com/thebassmoa.
KEEP MIAMI NEW TIMES FREE... Since we started Miami New Times, it has been defined as the free, independent voice of Miami, and we'd like to keep it that way. With local media under siege, it's more important than ever for us to rally support behind funding our local journalism. You can help by participating in our "I Support" program, allowing us to keep offering readers access to our incisive coverage of local news, food and culture with no paywalls.
Make a one-time donation today for as little as $1.