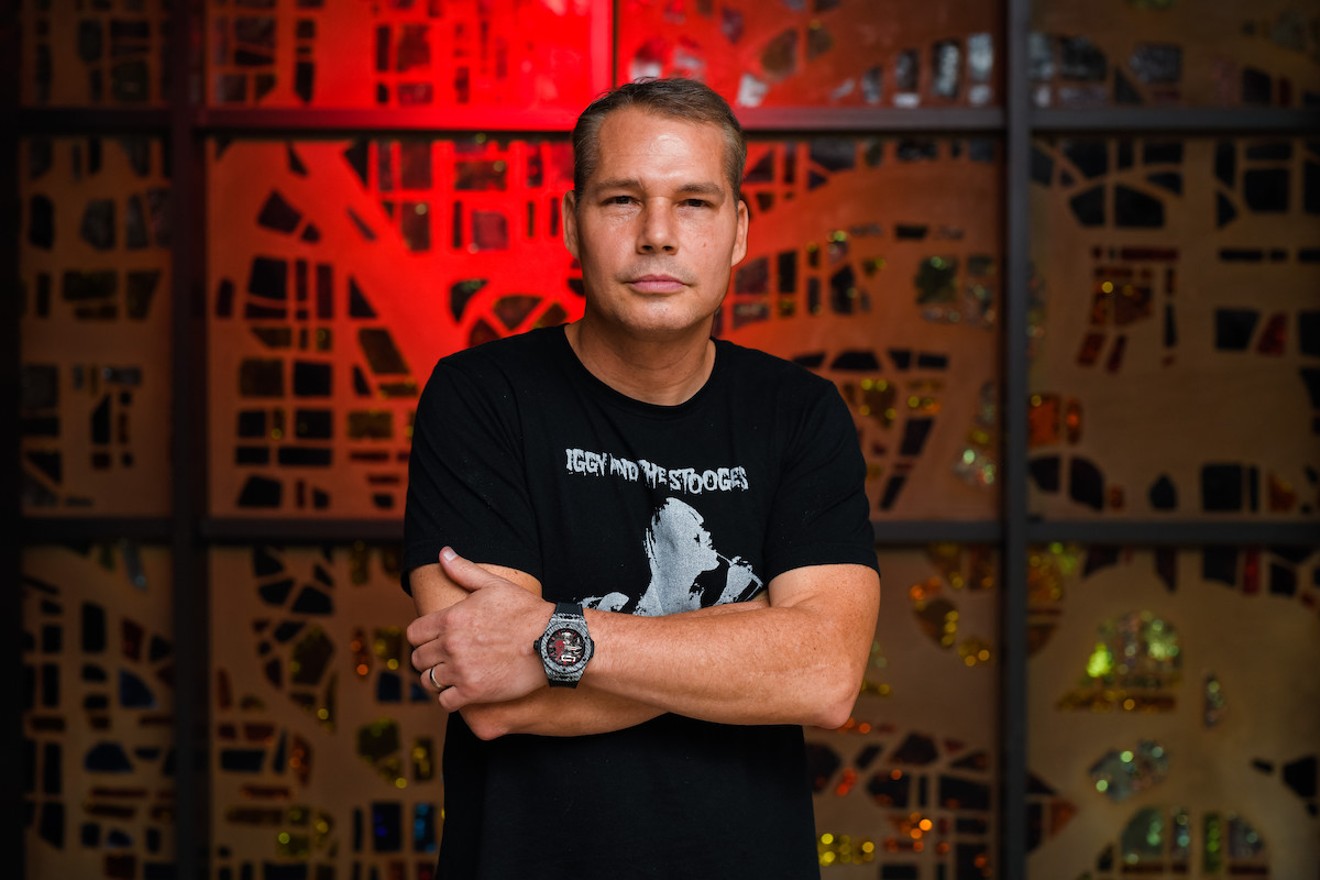 Shepard Fairey Photo by Dylan Rives / Getty Images
In the summer of 1989, when he was 19 years old, the street artist Shepard Fairey stumbled into what he calls a “happy accident.” After completing his freshman year at Rhode Island School of Design (RISD), Fairey was working at the Watershed skate shop downtown, creating homemade stencils, and printing his own T-shirts. If his boss wasn’t around, he would sell the extra shirts in the shop. One day, when a friend wanted to learn how to cut a stencil, Fairey flipped through a newspaper and came across an ad for wrestling featuring Andre the Giant.

“I said, ‘Why don’t you cut a stencil of this?’ And he goes, ‘No way — that’s stupid,’" Fairey recalls. "And I just spontaneously said, ‘What are you talking about, man? Andre’s posse is taking over.’”

Just like that, one of the world's most memetic images was born.

The friend ultimately grew too frustrated to finish the stencil, so Fairey finished it himself. Then he wrote, “Andre the Giant has a Posse,” in ballpoint pen and added Andre’s height and weight (“7’4”, 520 lb”). He went to the copy shop, printed some of the stencils on sticker paper, and started leaving them around town — in clubs, on stop signs, around the RISD and Brown campuses. Before long, people began approaching him and asking for the stickers. A local paper even published a call for information about the story behind them.

“I’d only printed maybe a thousand stickers and put them around, but I guess they were strategically well-enough placed that it seemed like they were becoming ubiquitous,” Fairey says. “I was fascinated by that idea of how to create something from nothing and give power to something purely through repetition and placement.”

The Andre stickers were only the beginning of Fairey’s career, one that’s seen him become one of the best-known graphic artists of our time. His pieces have frequently taken over public spaces, combined art with activism, and carried politically charged messages that provoke reflection on current events. Works such as the “Hope” poster he created during Barack Obama’s 2008 presidential campaign or his “We the People” series for the 2017 Women’s March became visual symbols of important moments in history.

Thirty years since that first summer spent spreading his work, Fairey is reflecting on his career thus far in his latest exhibit, "Facing the Giant: 3 Decades of Dissent." The show, which toured worldwide throughout 2019, is making its final stop at Miami’s Wynwood Walls, where it opened December 4 and will remain through January.

To Fairey, the exhibit is not a retrospective, because he believes he still has much more to explore. Instead, he’s chosen 30 works that represent the way his art has evolved over the past three decades. The cumulative result is a portrait of an artist who has commented on everything from police brutality and the horrors of the Iraq War to climate change. Fairey has always asked viewers to think about the underlying motives of the prolific images they’re inundated by in everyday life, raising questions about propaganda and the subtle effects of advertising. Viewers can see the evolution of the original Andre the Giant images — which soon became the more abstract, simplified posters of the “Obey Giant” campaign — and the influence of artists such as Andy Warhol, who also specialized in repetition with variation.

“He was a big influence in terms of taking accessible imagery and saying that there doesn’t have to be a degree of mystique," Fairey says. "Sometimes small tweaks that are sophisticated are what take something from being very mundane into being special. If you can speak a universal language in a singular way, that counts for a lot.”

Though there are 30 pieces, Fairey didn’t limit himself to choosing one work from each year; he found that certain periods were particularly creative for him, so he used less from other years. He also wanted to focus on works he had never made into nice prints before, or those that might be less familiar to people. The Obama “Hope” poster is notably absent because Fairey thought it was so well known that it wasn’t necessary to include. “It sort of has its own life beyond everything else I’ve done because it was so ubiquitous,” he says.

Early in his career, Fairey discovered a store that sold discontinued rolls of wallpaper for 50 cents each. He made stencils atop the floral prints, incorporated the paper into collages, and eventually designed his own patterns. Flowers can be seen in many of his works, often as symbols of peace or in the backgrounds of his portraits. Though at first he was resistant to images like this that seemed too mainstream or universally appealing, he soon saw an opportunity in them. “How worn out is a flower as an artistic subject? But anybody that looks at these is going to recognize them as mine,” he says. “Part of my strategy is how to use things that I think have an undeniable allure, a visual power, but then also have something embedded that’s a little bit provocative, and create a conversation that wouldn’t happen otherwise.”

Though Fairey’s work has been political from the beginning, he has also evolved in the way he chooses to convey his messages. As a younger artist, he was more concerned with finding like-minded people, which meant his work mostly resonated with those who already agreed with him. “My thinking has shifted to trying to, at least in some of the pieces, make something that will draw a viewer in no matter what their politics are and then maybe get them to consider something that they’d be predisposed to rejecting if it were a newspaper editorial,” he says.

He takes one of his Women’s March posters as an example. A woman’s face is the centerpiece of the work, but when you look more closely at the collage surrounding her, a smaller image of a smiling man in a suit becomes visible. He’s saying, “I know!... Outsource all the jobs... but blame immigrants!" a pithy critique of U.S. immigration policy.

“Before, I would have made that the whole poster; I wouldn’t have made that just a small part of it,” Fairey says. By centering on a more ambiguous image instead, “that image, I think, has an immediate appeal whether you think that we should be building the wall or not,” he says. “And then it’s like, ‘Hey, what is this about?’ And then all the other things are on it.” These days, he finds it’s actually more radical to be willing to have conversations with people who disagree with him. “As punk rock as I’ve been and willing to stand up for my ideas, I still believe in basic civility,” he says. “I’m always going to be outspoken about what I believe in, but I think there are ways to do that without unnecessarily alienating people, and that’s what I think I’ve become more strategic about.”

For Fairey, who used to get arrested for making his work, it’s also significant to be showing in Wynwood and to think about how the reception to street art has changed over the years. “I am really happy that street art has broadened the appreciation for art in general and specifically art in public spaces,” he says. Though he’s well aware of some of the downsides that can follow the growing popularity of a place like Wynwood — gentrification, commercialization, the displacement of families — he doesn’t blame the art itself for those things. And in a world where art can feel like a luxury, available only to a wealthy few, he believes street art remains accessible.

“That’s why it’s so meaningful to me to do stuff on the street,” he says. “At the beginning, it was kind of my only option, but now I do it because philosophically it’s important to me.”

"Facing the Giant: 3 Decades of Dissent." Through January 2020 at Wynwood Walls, 2520 NW Second Ave., Miami; 305-531-4411; thewynwoodwalls.com.
KEEP MIAMI NEW TIMES FREE... Since we started Miami New Times, it has been defined as the free, independent voice of Miami, and we'd like to keep it that way. With local media under siege, it's more important than ever for us to rally support behind funding our local journalism. You can help by participating in our "I Support" program, allowing us to keep offering readers access to our incisive coverage of local news, food and culture with no paywalls.
Make a one-time donation today for as little as $1.