Murder on the Orient Express at Actors' Playhouse Takes Viewers on a Funny, Fast-Paced Thrill Ride

The cast of Murder on the Orient Express Photo by Alberto Romeu
Agatha Christie’s diehard fans are in for a suspenseful ride when Ken Ludwig's stage adaptation of her 1934 novel Murder on the Orient Express makes its South Florida premiere on Friday, May 20, at the Actors' Playhouse in Coral Gables. The comedy-mystery debuted at McCarter Theatre Center at Princeton University in New Jersey in 2017.

The plot-twist masterpiece has thrilled mystery lovers by way of television, radio, and film, but Actors' Playhouse artistic director David Arisco says the theater retelling offers a new take on the classic.

"Ken Ludwig is a well-known playwright for comedies like Lend Me a Tenor, and he kept the murder mystery to this play but also added some fun and levity to it," Arisco tells New Times. "The ten characters are a mix of nationalities, ages, and backgrounds and Ludwig found quirkiness in each one of them. They are all suspects and they all have alibis and each clue matters on how you put the puzzle together."

Originally planned for the company's 2020 season, Murder on the Orient Express was put on hold owing to the COVID pandemic and production and casting didn't resume until last fall. The play, which unfolds in two acts over two hours, had been scheduled for the theater’s main stage but got moved to the more intimate space upstairs, a switch Arisco says facilitates a stronger sense that the actors and the audience are journeying together.

The stage starts off as a café in Istanbul before being transformed into a train platform and eventually a dynamic, 48-foot-long set representing the Orient Express' dining car, sleeper car, and observation deck, which serves as the backdrop for Christie’s ingenious murder tale. The railroad journey is interrupted when the train gets trapped in the snow and a passenger turns up dead. One of Christie’s iconic characters — the eccentric, mustachioed Belgian detective Hercule Poirot — happens to be on board, and he assumes responsibility for solving the case.

With every scene, the audience realizes that there’s more to each character, utterance, and object than meets the eye. 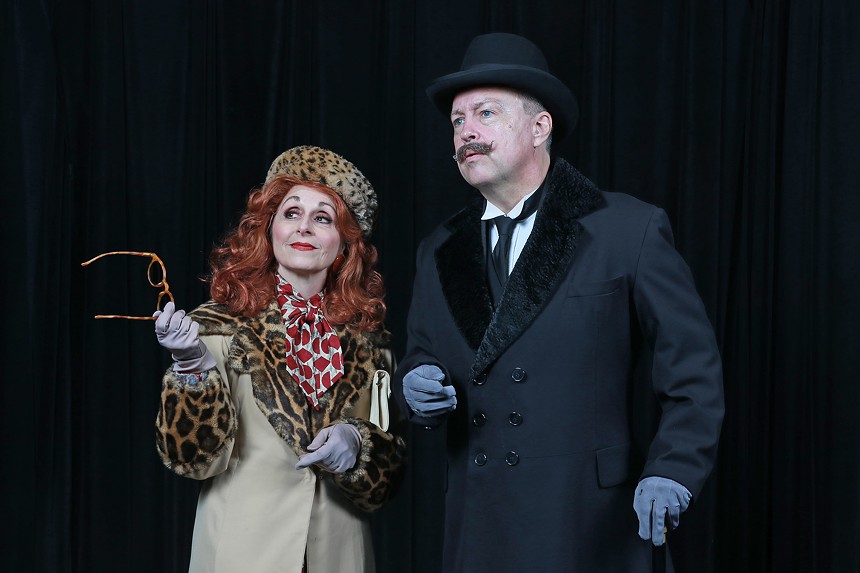 Irene Adjan and Terry Hardcastle star in Murder on the Orient Express.
Photo by Alberto Romeu
"My favorite part about this story and the reason I picked it up is that I fell victim to what everybody else does," notes Arisco, who’s been with the Actors' Playhouse since its inception in 1988. "It seems like everyone knows the title and has read the book or seen the film, but people are so involved by the mastery of the plot itself that, when you ask, nobody remembers who the murderer is."

As in other Christie’s novels, the characters in Murder on the Orient Express are fictitious but the setting is real. The plot was inspired by one of the author's own weather-interrupted travels on Europe’s first transcontinental express, which ran from Paris to Constantinople (now Istanbul) from 1883 to 1977. Born in England in 1890 and homeschooled by her mother, Christie had a lifelong fascination with solving riddles and puzzles that won her the sobriquet "Queen of Crime" and made her one of the best-selling authors in history. Her books have sold billions in English and a further billion in translations into more than 100 languages. Christie also left a remarkable legacy of plays and short stories.

For Irene Adjan, a three-time Carbonell Award winner who plays the exuberant American passenger Helen Hubbart, the plot's allure is based one of Christie’s most outstanding talents: finding different angles to each character, in this case a mélange of intriguing personalities that she says will appeal to audiences of all backgrounds, even if they're unfamiliar with Agatha Christie's world.

"Nobody on the train is what they seem to be, you really have to dissect the part of each character that's for show and what the motives really are," Adjan notes. "The game of cat and mouse the characters play is fascinating. There's a lot for the audience to figure out and because this theater version is a more comical and fast-paced version, it is a lot of fun trying to keep guessing and try to figure out who the murderer is.”

Murder on the Orient Express. Friday, May 20, through Sunday, June 5, at Actors' Playhouse at the Miracle Theatre, 280 Miracle Mile, Coral Gables; 305-444-9293; actorsplayhouse.org. Performances Wednesday through Saturday at 8 p.m., Saturday at 2 p.m., and Sunday at 3 p.m. Tickets cost $40 to $85.
KEEP MIAMI NEW TIMES FREE... Since we started Miami New Times, it has been defined as the free, independent voice of Miami, and we'd like to keep it that way. With local media under siege, it's more important than ever for us to rally support behind funding our local journalism. You can help by participating in our "I Support" program, allowing us to keep offering readers access to our incisive coverage of local news, food and culture with no paywalls.
Make a one-time donation today for as little as $1.
Juliana Accioly
Contact: Juliana Accioly