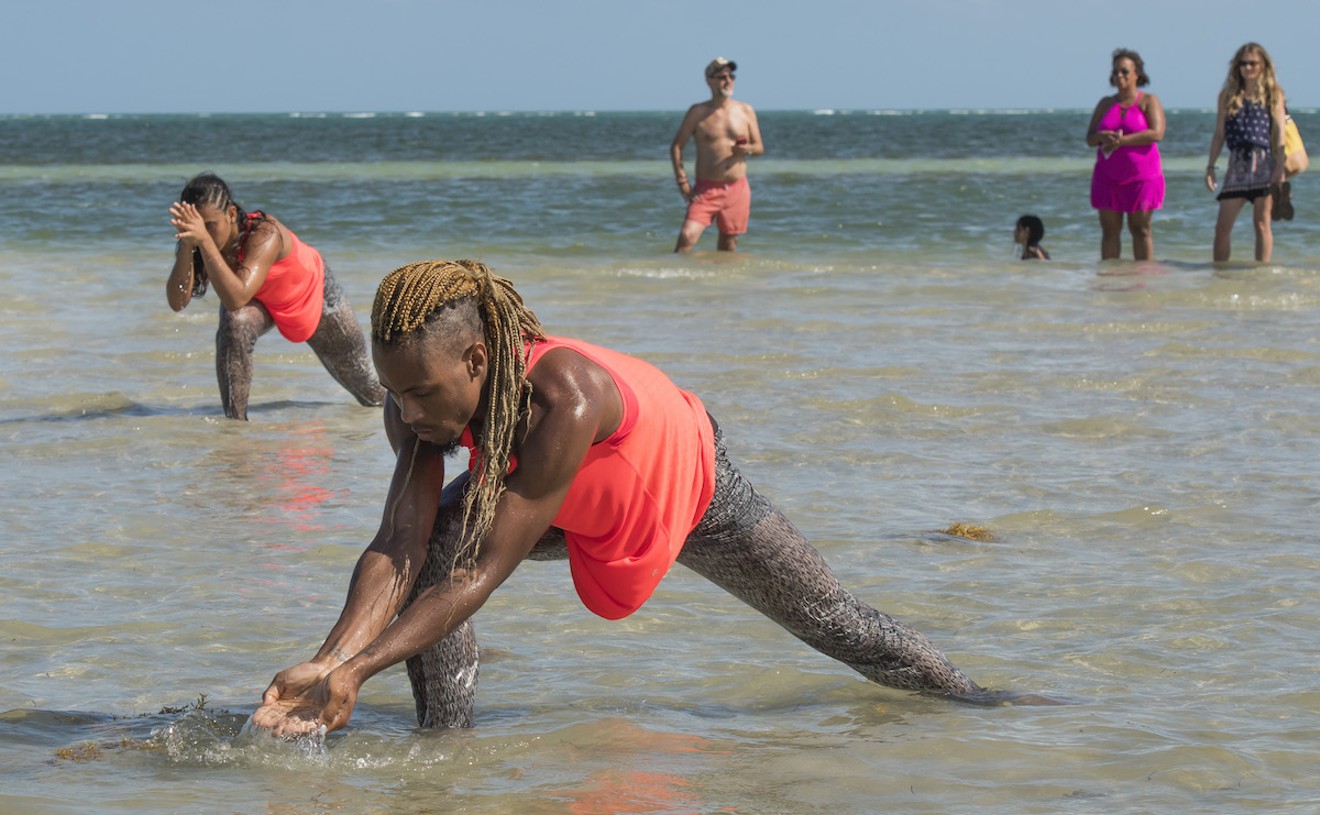 The Jubilation Dance Ensemble from Miami Dade College's Kendall Campus performed in 2018. Photo courtesy of Mitchell Zachs
After living in Miami nearly four decades, Dale Andree had become acutely aware of climate change and sea-level rise, as well as the powerful, essential nature of water. In a creative response to global warming, she created National Water Dance as a way to unite dancers and communities.

Now the dance artist is reshaping her project to respond to a new world upheaval: the coronavirus pandemic. Andree is calling on dancers in Miami and across the nation to join National Water Dance in "dancing for our lives" online this Saturday, April 18. The goal is to create hope and togetherness through movement at a time of growing isolation.

“There’s always that question of, What’s the point? There’s a huge point. We’re not giving up. Being in our bodies is the one thing we have and have to try to protect," Andree says. “We’re dancers and moving and made of water. What are we saying with the movement we create? How do we send that out into the world?”

This year was set to be the biggest yet for National Water Dance, which has taken place every other year since Andree debuted it in 2014. More than 100 dance ensembles, university dance departments, and other groups from 36 states and Puerto Rico were prepared to dance outdoors at 4 p.m. April 18 at water sites ranging from Miami’s Virginia Key Beach to mountain streams to the Great Lakes.

For the first time, Andree was prepared to stage a dance around the Lincoln Memorial Reflecting Pool at the National Mall in Washington, D.C., creating a potent physical and symbolic metaphor for uniting the country around a crucial environmental issue. All of the performances were to be livestreamed on the National Water Dance website, displaying a gorgeous panoply of dance and American natural beauty.
All of those plans changed in early March while Andree was in D.C. to work on the Reflecting Pool performance with area dance companies and universities. Like the rest of the world, Andree has been adjusting continually as the pandemic has escalated, closing parks, universities, beaches, and gatherings across the United States.

Decades of living in Miami and dealing with tropical storms has helped Andree handle this fluid new disaster.

“It’s that hurricane energy — you can’t do anything about it, so you improvise,” says Andree, a longtime dance mentor and creator who formed her first Miami dance troupe in 1985 and taught at the New World School of the Arts for 20 years. “You have to deal with the immediate.”

Like many other artists, she's turning online. Because groups can’t perform together, individual participants are being called to dance in their backyards or kitchens or wherever else possible at 4 p.m. EDT this Saturday.

To unite them choreographically (if not physically), they’ll incorporate dance combinations they can learn from a video on the project’s social media accounts. Everyone will film themselves on Facebook Live or Instagram Live. Afterward, participants will upload the videos to their social media accounts, tagging National Water Dance and using the hashtags #nationalwaterdance, #nationalwaterdance2020, and #dancingforourlives.

“I feel like I’m on an internet highway,” Andree jokingly says of her accelerated education in online performance and social media.

Houston Cypress of the Otter Clan of the Miccosukee Tribe of Indians performing during National Water Dance in 2018.
Photo courtesy of Mitchell Zachs
In Miami, Andree’s NWD Projects troupe — along with regular collaborator Michelle Grant-Murray, coordinator of dance at Miami Dade College, and her Olujimi Dance Theatre — will perform and livestream separately. Andree is reaching out to other local companies, schools, and arts organizations to join them.

She and project social media director Elsa Roberts hope that, as they spread the word virtually, more and more people will join in dancing together in a moment of national and creative unity — like drops of water streaming together into a giant virtual pool.

Roberts, who lives in Seattle, says working on National Water Dance has been inspiring. A freelancer whose roommate was just laid off from a restaurant, Roberts has been reeling from the changes of the past several weeks.

“People need a sense of connection, and this is providing that,” Roberts says of the dance event. “It’s really nice to be involved in a production so grounded in people and the planet.”

Andree hopes National Water Dance will inspire not only dancers but also everyone who watches to contemplate some basic questions: What unites us? What is essential for us as human beings? As communities?

“When something like this happens, you’re stripped down,” she says. “How am I connecting to other people? What am I feeling? How do I say it? People are slowing down, thinking about how we fill our time and what that means. This is the time to look around us with a lot more reflection. That will give us a deeper understanding as we move forward.

“We’re all in this together.”

National Water Dance. 4 p.m. Saturday, April 18, at nwdprojects.org.
KEEP MIAMI NEW TIMES FREE... Since we started Miami New Times, it has been defined as the free, independent voice of Miami, and we'd like to keep it that way. With local media under siege, it's more important than ever for us to rally support behind funding our local journalism. You can help by participating in our "I Support" program, allowing us to keep offering readers access to our incisive coverage of local news, food and culture with no paywalls.
Make a one-time donation today for as little as $1.
ArtburstMiami.com is a nonprofit source of theater, dance, visual arts, music, and performing arts news.