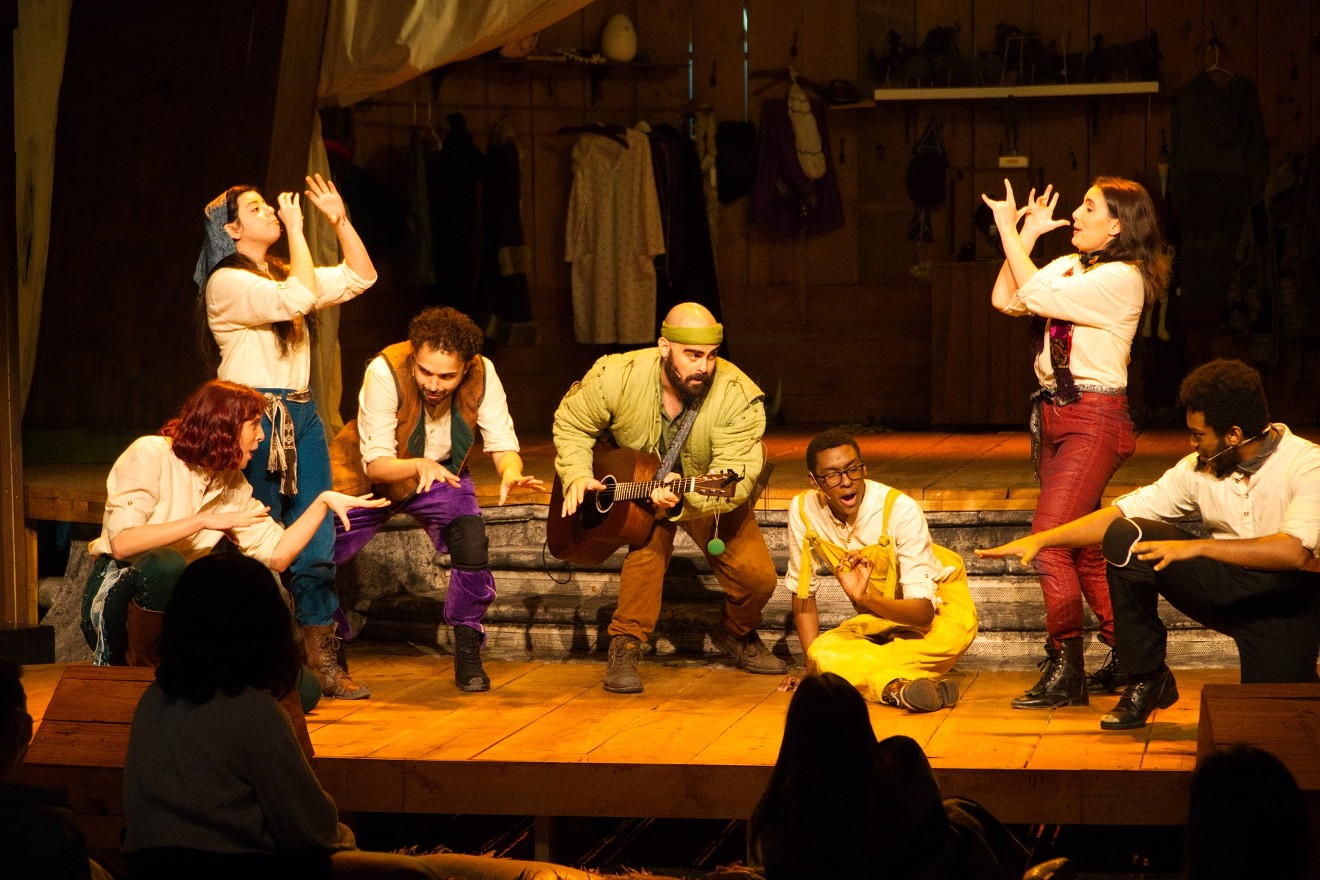 A cast of seven takes on Area Stage’s Shrek the Musical. Photo courtesy of John Rodaz
For nearly a year now, live theater has been a necessary rarity in an enduring pandemic.

But in South Florida, where winter weather is so often glorious, the option of taking art outside has allowed a limited, in-person reconnection of artists and audiences, an especially safety-conscious path back from virtual theater to live experiences. (A few companies, it should be noted, are producing theater inside their venues.)

This version of the 2008 Broadway musical by composer Jeanine Tesori and book writer-lyricist David Lindsay-Abaire has been devised by director-designer Giancarlo Rodaz. Son of Area Stage founders John Rodaz and Maria Banda-Rodaz, the young director again proves himself adept at imaginatively reinterpreting large-scale musicals so that they work in fresh ways.

Shrek the Musical, based on the 2001 DreamWorks animation film that launched a franchise, marks the first time Area Stage has created an outdoor production in its new home, South Miami’s Shops at Sunset Place.
The set, which has a deliberate Renaissance Fair/let’s-put-on-a-show vibe, and all the other creative elements (lighting, costumes, puppets) were designed by Rodaz with an assist from his Area Stage colleagues. Sound design is by Abraham Oleksnianski, with musical direction by Katie Duerr, who plays Princess Fiona and other roles.

Though the original Broadway version of the show, which was produced locally by Fort Lauderdale’s Slow Burn Theatre in 2019, features more than two dozen actors, Rodaz figured out how to do the show with just seven performers and a small band. The actors, even those playing the lead roles of Shrek, Fiona, and Donkey, do double, triple, quadruple duty. Puppets and shadow puppets stand in for some characters. Somehow, thanks to Rodaz’s imagination and the actors’ robustly chameleonic voices, it all works.

The stage version of Shrek runs a half-hour longer (plus intermission) than the animated original, so at times the show feels overstuffed with tangents and made-for-the-stage musical numbers. But the socially distanced audience of about 80 people, including a few family groups picnicking on the grassy area closest to the stage, remained engaged throughout. 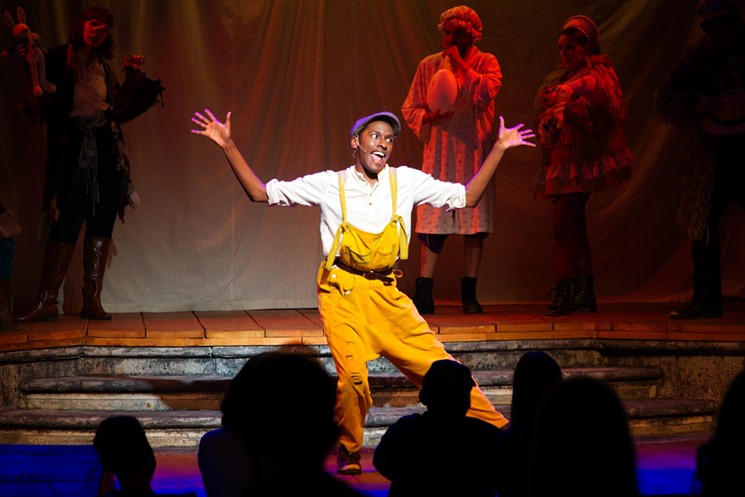 Imran Hylton as Pinocchio leads the fairy-tale creatures.
Photo courtesy of John Rodaz
Like the movie, Shrek the Musical traces the journey of the oversized green ogre Shrek (Frank Montoto) from outcast loner to his own kind of hero. With help from the beyond-garrulous Donkey (Aaron Hagos), he rescues the cursed Fiona (Duerr) from her long imprisonment in a tower. Then, he falls for her as they make their way back to the kingdom of Duloc, where she is to become the bride of the dastardly, height-challenged Lord Farquaad (John Mazuelos).

Mixing fairy-tale whimsy, punchy musical theater numbers, inside-theater references, a happily-ever-after story with a twist, and enough adult humor to keep the grownups interested, Shrek the Musical is performed by a cast of young professionals, a few still in college and several with ties to Miami’s New World School of the Arts.

When he’s playing Shrek, Montoto transforms himself with little more than a fuzzy green clown nose and a Scottish accent, sometimes strumming his guitar as he delivers strong renditions of “Big Bright Beautiful World,” the playful “I Think I Got You Beat,” “When Words Fail,” and more. Duerr, a senior at the University of Miami’s Frost School of Music, is funny, charming, and clarion-voiced as Fiona. Hagos takes a bit to find his rhythm as Donkey, but once he does, he’s off to the comedic races.

Mazuelos sometimes takes to his knees to play the diminutive Farquaad but at other times doesn’t bother. Even so, he’s effective as a tiny bully with a towering ego. Gabi Gonzalez digs into the diva Dragon role; Imran Hylton leads the fairy-tale creatures in “Story of My Life” as a gangly and wry Pinocchio; and Jeana Montgomery pushes back against Farquaad as the Gingerbread Man, also known as Gingy.

With the band playing behind a glass storefront near stage left, the performers use microphones, so hearing them is never an issue. If anything, they can be a touch too loud, pushing the broad material harder than they need to.

In terms of safety protocols, Area Stage’s staff takes your temperature and gives you a wristband in lieu of a ticket. There’s up-close seating available on the ground (bring a blanket), and folding chairs are spaced in seating groups behind the grassy area. There’s a single bathroom for men and women, so plan accordingly.

The show, Rodaz has said, is an experiment to see how viable outdoor theater might be for Area Stage. The remaining shows are set for Friday through Sunday until February 6, so you still have time to decide for yourself.

Shrek the Musical. 7:30 p.m. Friday through Sunday until Saturday, February 6, at Area Stage Co., 5701 Sunset Dr., South Miami; 305-666-2078; areastage.org. Tickets cost $16 to $175 via areastagecompany.simpletix.com.
KEEP MIAMI NEW TIMES FREE... Since we started Miami New Times, it has been defined as the free, independent voice of Miami, and we'd like to keep it that way. With local media under siege, it's more important than ever for us to rally support behind funding our local journalism. You can help by participating in our "I Support" program, allowing us to keep offering readers access to our incisive coverage of local news, food and culture with no paywalls.
Make a one-time donation today for as little as $1.
ArtburstMiami.com is a nonprofit source of theater, dance, visual arts, music, and performing arts news.