IRL Institute Christian Hernandez
When Wynwood's rising property values began forcing gallerists out of the neighborhood several years ago, some art spaces fled west to Allapattah. Others moved to Broward or even back to Miami Beach. But the majority of galleries relocated to Little Haiti.

Tucked away near neighbors such as MADE at the Citadel and Noguchi Breton, IRL Institute (you know, like the internet acronym) is an understated space that relies on the intelligence of its programming to draw viewers. Politically driven and informed by “a desire to fill a niche between the institution, the commercial, and the alternative,” the space is a happy medium between these sometimes dissonant extremes of the art world.

IRL’s next opening is Juan Gonzalez’s Compressor, a sound art installation that seeks to “reinterpret 20th-century futurism and the radical affinities of the Dada movement.” The show’s title is a reference to the audio processing effect that narrows the sonic spectrum; Gonzalez posits “the current cultural fiber of living in a postindustrial society has fundamentally primed our ears to the sounds generated by modern technology.” 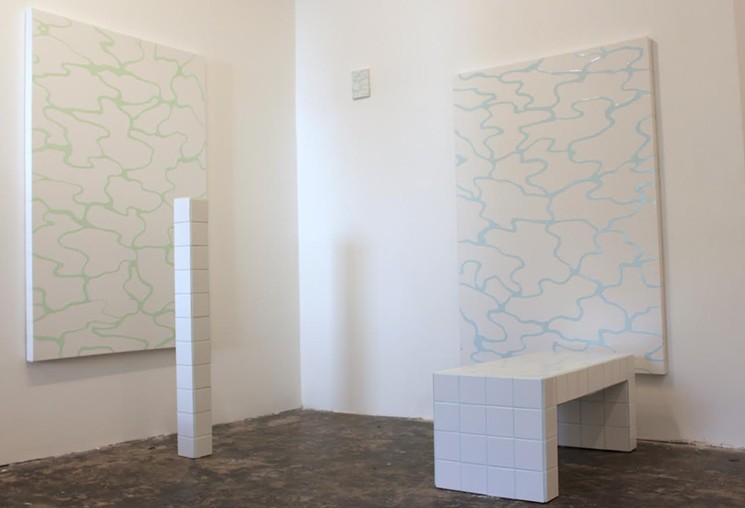 One of the first of a new wave of galleries to set up shop in Little Haiti, &gallery has been promoting its unique mix of artists with ties to Miami and locals who continue to create work in the city. Offering an intimate experience removed from the sterility of the average gallery vibe, &gallery (sometimes simply called “And”) has been showing works in the neighborhood since 2014, and its personal touch stems from directors Annie Berkowitz and Jordan Trachtenberg, and their intricate involvement with their artists and clientele.

Open by appointment, the gallery is currently showing "Uninterrupted," a solo exhibition by Patricia Schnall Gutierrez. Her abstract paintings use color and process to “produce continuity between domesticity and the individual focus,” reconciling emotional and process-based works through their push-pull compositions.

The Laundromat is unique on this list for being both an artist residency and an exhibition space. The institution houses nine artist studios and a full-size gallery and offers community programming and opportunities for interaction between artists and the public. Founded by alumni of similar spaces such as the Bakehouse and ArtCenter/South Florida, and presented by the nonprofit gallery Rise Up and grants from organizations such as the Knight Foundation, Laundromat strikes a smart balance between artistic practice and community engagement.

Laundromat’s next opening is "Wilderness," a group show with work by Leah Brown, Christin Paige Minnotte, Christina Pettersson, and Lisu Vega. The show explores “spaces outside of ‘civilized’ places” and the qualities we associate with wilderness. Opening night, this Saturday, March 11, will host “a live sculptural performance combining footage from the Alaskan wilderness, sculptural garments by Lisu Vega, and dance by Marisa Turner.”

When Mindy Solomon Gallery first touched down in Wynwood, savvy Miamians might’ve guessed her stay would be short-lived. The neighborhood was changing, and Solomon’s curation was a little too cerebral, a smidgen too perplexing for the average Wynwood sightseer. That's not a slight by any means; in refusing to “dumb down” the work, Solomon has created a loyal following via a string of sophisticated exhibits where spectators are just as likely to see a series of highly conceptual, illustrative paintings as a set of visceral, material-driven sculptures. Decamping to Little Haiti has helped maintain the serious, creative vision of this forward-thinking space.

Running through March and April are dual solo shows: "Whenever Forever" by Jennifer LeFort and "Revelatory Dérive" by Andrew Casto. LeFort’s innovative canvases bristle and glow with assertive neon hues, a space the artist says is “both pre-tech and post-virtual at once.” Casto’s alien sculptural forms mimic erosion and geological processes, but their unconventional coloring and warped compositions seek to invoke “the phenomenological ramifications of responsibilities and stress [that] shape us physically, mentally, and emotionally.”

The opening reception for the two shows is this Saturday, March 11, from 6 to 9 p.m.

Spinello Projects has been reincarnated in several locations during its storied Miami history. The latest form is taking shape in Little Haiti. Conceptually driven but with a playful sensibility, Spinello’s curation showcases contemporary artists with nods to process art, postmodern design, performance, politics, and beyond. At times the programming has a mischievous bent, such as in Farley Aguilar’s carnivalesque surrealist paintings and Clara Varas’ chaotically soothing assemblages.

On display through mid-April is Sinisa Kukec’s "I Need American Needs Me," in which the artist has subjected a series of raw materials, such as oak and mirror, to various processes (heat, accelerated gravity, etching, electrical pulses, and others), creating warped surfaces with vortices that resemble those found in “deep space and inner space, specifically in the forms of black holes.”

With her previous space, Gallery Diet, Nina Johnson has been promoting the work of critically engaging artists since before the Wynwood gold rush. The gallery’s steadfast mission to “promote emerging and established artists from around the world” has yielded wonderful results, such as a recent showcase of Ana Betbeze’s emotional, texturally driven work "In the Flesh Part II: Potential Adaptations," a conceptual show by L.A. curator Courtney Malick that explored society’s changing relationships with health and technology.

Coming up this month, Johnson will show Miami local Nicolas Lobo’s "Cash Me Out." Presented in the austerely funny show, six fiber-and-terra-cotta bas-relief works — imprinted with the shapes of various mass-produced foods (onion rings, M&M's, breakfast cereal) and the interfaces of various ATMs — forge connections between consumerism, the lived environment, and Lobo’s winking, postmodern absurdity. The opening reception for "Cash Me Out" will take place Saturday, March 18, from 7 to 9 p.m.

For more than a decade, Pan American Art Projects (PAAP) has devoted its programming to work from the Americas, including Chile, Cuba, Mexico, and beyond. Since relocating to Little Haiti, the space boasts a gallery for exhibiting represented artists and an annex for special projects featuring works from PAAP's collection. The two spaces offer an opportunity to reflect on art of the Americas from two distinct vantages.

On display through early April are "The Power of Perception," in the annex, and "Kcho and Diago: Early Works," in the exhibition space. Diago and Kcho use domestic spaces as a framework to “investigate various phenomena in Cuban reality” and reflect on the concept of homes and domiciles. "The Power of Perception" showcases sculptural works, whereas "Early Works" features paintings and collages that highlight the artists' historical understanding.

On a well-traveled road bordering Little Haiti, Yeelen Gallery is an airy, well-curated space for the promotion of urban art and culture. The gallery tends to concentrate on realism and figuration, and many of its shows and events are geared toward social practice. The space seeks to further understanding between cultures, in part by “giving a voice to the unheard,” per its mission statement.

Ya La’ford’s "Simulation: Ancestral Patterns" will open this month at Yeelen. The Jamaican artist’s earthy, geometric canvases resonate with energy. Abstracted figures dance across the picture plane, a symbolic motif that the artist uses to “challenge notions of humanistic patterns and unseen experiences.”

Launched in 2006 as a vision of the late Miami-Dade Commissioner Arthur E. Teele Jr., the Little Haiti Cultural Center is a community-focused space that attracts thousands of visitors each year for programs centered on Afro-Caribbean culture. As part of its mission to “leverage arts and culture as tools for transformation,” the space includes an art gallery dedicated to showing works that enrich the neighborhood’s culture and promote discussion among the center's myriad visitors.

The LHCC is exhibiting "Borderless Caribbean: Liquid Knowledges," a three-part show that combines Antillean Lacunae: A Litany of the Botanical, a "multisensory experience exploring the colloquial and commercial uses of botanicals"; Garden of Mysteries and Botany of Memory and Experience, featuring work from contemporary Caribbean and Miami artists; and Liquid Knowledges, which seeks to "examine the contributions of Africans to the ethno-botany of the New World as well as the ideas of the enslaved populations of the Americas."

Miami's art scene mourned when Emerson Dorsch was uprooted from its Wynwood digs after 15 years. The gallery was home to some of the most memorable shows the neighborhood had seen, including the experimental performance series This Is Happening, responsible for spectacles such as a full-on '90s Miami bass party and a backyard bacon-eating contest. This same playful spirit and willingness to push the envelope live on in the gallery's Little Haiti location.

Currently on display, Elizabeth Condon’s "Unnatural Life" subverts ideas about femininity, upper-class tastes, and domesticity. The flowers Condon depicts on her canvases are not typical decorative fare; they’re dripped and splattered with color and patchwork motifs, clashing and refusing to stay put in one’s field of vision. The result forces the viewer to recontextualize these supposed “decorative, feminine” subjects.

KEEP MIAMI NEW TIMES FREE... Since we started Miami New Times, it has been defined as the free, independent voice of Miami, and we'd like to keep it that way. With local media under siege, it's more important than ever for us to rally support behind funding our local journalism. You can help by participating in our "I Support" program, allowing us to keep offering readers access to our incisive coverage of local news, food and culture with no paywalls.
Make a one-time donation today for as little as $1.
David Bennett