Courtesy of Ian Witlen
Photographer Ian Witlen got a call from New Times' art director just after 2:30 p.m. on Valentine's Day. She had heard reports there was an active shooter on the campus of Marjorie Stoneman Douglas High School. Witlen had graduated from the school in 2001.

"I immediately thought it was just another of the bomb threats that we had experienced on a weekly basis," he recalls.

But when Witlen headed in the school's direction, a ten-minute drive turned into 40. Cops from all over South Florida blanketed the area and flew by his car on the Sawgrass Expressway. He began to realize this was not a false alarm.

Because Witlen, a photographer who contributes to New Times among other publications, was there with his camera, he documented it all. Not only did he photograph the students and their teachers the day of the tragedy, but he also continued to cover the students' evolution from regular high-school kids to victims of a horrific crime to dedicated activists in the months that followed. Now, he's releasing a zine titled Movement, compiling his images into an early history of the #NeverAgain movement.

"We see school shootings and gun violence across the country and think, That could never happen here. this time it did. This is where I grew up. The same halls I used to walk every day. I never felt as though I wasn't safe. How could this be happening? And here of all places. How? Why?" Witlen wondered.

The day of the shooting, Witlen parked over a mile away from the school and saw a sea of emergency response vehicles. "It turned the quiet streets of Coral Springs and Parkland into a parking lot. Trauma response helicopters were rotating their landing patterns on the baseball field at North Community Park, which I used to walk by every day after school," he remembers.

Courtesy of Ian Witlen
At first, he says, he felt angry and numb. "As a photojournalist, we aren't allowed to outwardly react. We have to compartmentalize our emotions so that we don't influence our subject matter. Day after day, I had been assigned by various publications to document the vigils, the memorials, the protests, the school walkouts, the parents mourning the loss of their children — all the while having to hide my emotions and make sure that I wasn't letting my personal feelings bleed into my coverage. As an alumnus, this is a very difficult line to walk. I wanted to cry with everyone else and show support for my alma mater, but I couldn't."

Instead, he says, he embarked on a personal project, interviewing and photographing those at the school that terrible day to document the #NeverAgain movement.

Because documenting the experiences of his fellow alumni and teachers is self-funded, Witlen decided to take some of his photos and turn them into 100 limited-edition signed and numbered zines titled Movement, and sell them to support his bigger project. The zine costs $25 for 25 full-color pages containing photographs taken in Parkland between February 21 and April 20. Witlen is selling the zine independently to buyers who email him and at events such as this Saturday's Zine/Art/Music Fair in Fort Lauderdale. An exhibit of his Parkland photos will also be on display at North Regional/Broward College Library later this month.

The introduction begins, "As a Marjory Stoneman Douglas alumnus, the Parkland tragedy did not hit close to home. It shattered it." It ends, "I witnessed the birth of a movement." The accompanying photo is of students Kelsey Friend and Julia Brighton visiting the memorial of their teacher Scott Beigel, originally published on Vanity Fair's website. Another photo in the book appeared both in Vanity Fair and the CNN documentary The Parkland Diaries.

"The printing of the zine was made possible in part by mobilizing MSD alumni," he explains. The organization, which supports MSD and its community, started the day after the shooting as a Facebook group that went viral and now has more than 11,000 members. Witlen is on the organizing committee of the South Florida chapter, though for ethical reasons he does not plan events he's been assigned to cover as a photojournalist. "[The organization] has been responsible for many of the healing efforts for the teachers and students, as well as getting over 700 students, teachers, and alumni to March for Our Lives in D.C.," he says. 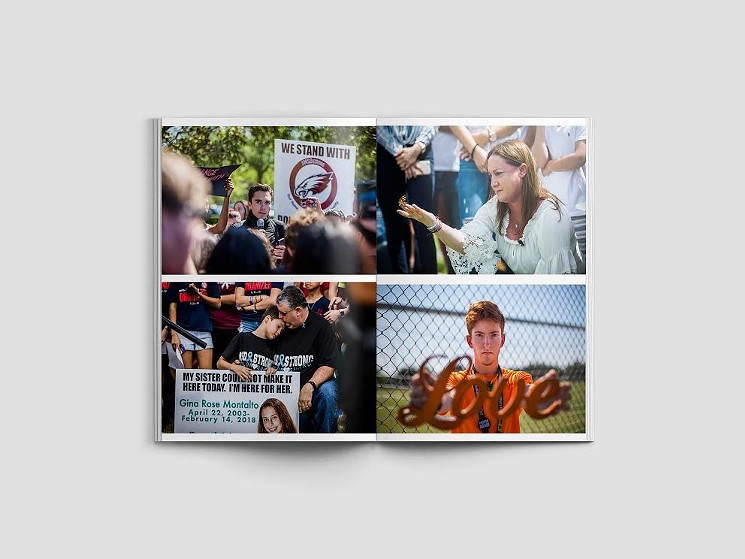 Courtesy of Ian Witlen
His goal for his larger project — the one Movement supports — is to create a learning tool for schools and communities. "Because the photographs are paired with the audio from the moment the portrait is captured, each portrait is a moment of emotional recall that encapsulates the individual's lived experience of February 14. I believe that enabling the viewer to live and feel what each person experienced is an incredibly powerful means through which we can educate the public on the real effects of gun violence in this country, effects which shatter communities and eviscerate personal lives and dreams," he explains. "Too often, we read or see these stories in the abstract. I hope that through this project people will be able to see themselves in the coaches, English teachers, athletes, wallflowers, drama kids, band kids, and popular kids, regardless of ethnicity, race, or immigrant status, because gun violence spares no one, and finally take a stand against this epidemic that has taken our country by force."

"Ian Witlen Photography." Friday, August 24, through September 30 at North Regional/Broward College Library, 1100 Coconut Creek Blvd., Coconut Creek; broward.org/library. Witlen will give a talk about the exhibit August 28.
KEEP MIAMI NEW TIMES FREE... Since we started Miami New Times, it has been defined as the free, independent voice of Miami, and we'd like to keep it that way. With local media under siege, it's more important than ever for us to rally support behind funding our local journalism. You can help by participating in our "I Support" program, allowing us to keep offering readers access to our incisive coverage of local news, food and culture with no paywalls.
Make a one-time donation today for as little as $1.