Vida Sofia supervises the proceedings at a recent Raw Figs pop-up. Photo by Rudy Duboue
A female model stands perfectly still — and perfectly posed — on a table underneath a straw tiki hut. The salmon-colored sky and patio string lights hanging from the surrounding trees help frame the picture. The model is encircled by a crowd quietly observing her. Some carry large sketchpads accompanied by a box of art supplies, while others have small notebooks and one pencil.

Organized by artist and community-maker Vida Sofia, the Raw Figs figure drawing class meets almost weekly at various spots around Miami. On this night the group is at the Cleat in Key Biscayne.

Sofia glides around the participants, offering words of encouragement as she keeps time between poses. Her alarm rings and the class is ready for the next pose. A professional model herself, Sofia expertly directs the figure model. She lifts her left hand and turns it slowly to the right. The model on the table mimics the motion with her head. The timer is set when the pose is perfected, and the class begins to draw. 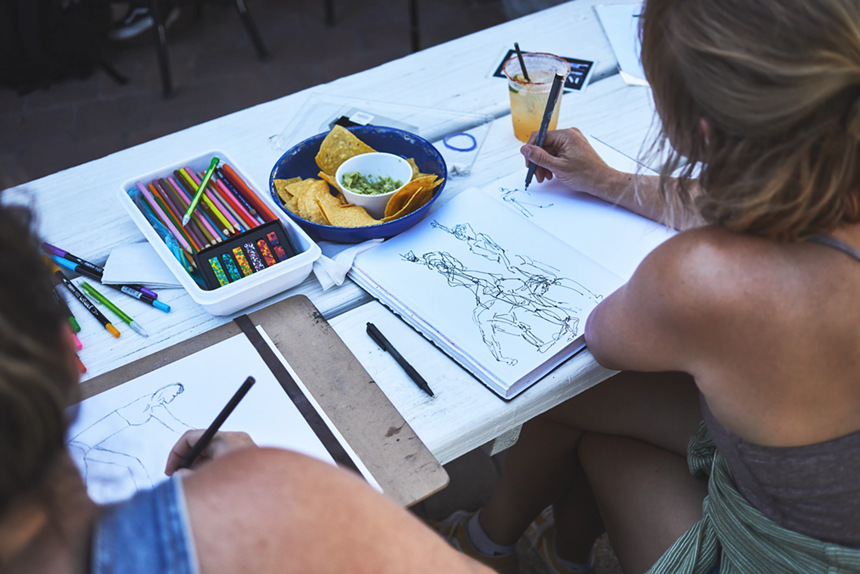 The crowd sketching at a Raw Figs pop-up at the Cleat.
Photo by Rudy Duboue
Sofia was inspired to create Raw Figs by her travels and her love of drawing. As a flight attendant, she found herself spending a lot of time people-watching at the airport and eventually started to sketch.

In unfamiliar cities, she often seeks out figure drawing classes to participate in. New York City has the most consistency when it comes to a variety of classes throughout the week, she says, pointing to the Big Apple as a model for Raw Figs.

When the pandemic hit and she found herself spending less time at airports, she sought out new places to sketch.

“Since I couldn’t fly and I couldn’t find a place even to draw outdoors where you can sit and people-watch, I just had the idea to create the space for myself and hopefully others would follow.”

Others did follow. One year since the first Raw Figs pop-up, Sofia has built a community of artists and art lovers. She creates a unique vibe at each of her event spaces that's not only welcoming to newcomers but carries with it a sort of magic. Participants share their work at a recent Raw Figs pop-up at the Cleat.
Photo by Rudy Duboue
“What a beautiful vibe,” says a nearby participant as she packs up her kit. Other guests seek out Sofia before they leave to give her a hug and thank her for organizing the class.

“I feel happy to be surrounded by the people that I’m surrounded by,” she says as she looks around the space and smiles. “It feels good.”

Sofia organizes her figure drawing classes at disparate venues, both indoors and outdoors, throughout the city. She’s currently working on the next phase of Raw Figs, which will include a membership program.

Raw Figs. 7 to 8:30 p.m. Friday, July 8, at Soya e Pomodoro, 120 NE First St. #2502, Miami; rawfigspopup.com. Admission is free, but a donation is suggested.
KEEP MIAMI NEW TIMES FREE... Since we started Miami New Times, it has been defined as the free, independent voice of Miami, and we'd like to keep it that way. With local media under siege, it's more important than ever for us to rally support behind funding our local journalism. You can help by participating in our "I Support" program, allowing us to keep offering readers access to our incisive coverage of local news, food and culture with no paywalls.
Make a one-time donation today for as little as $1.