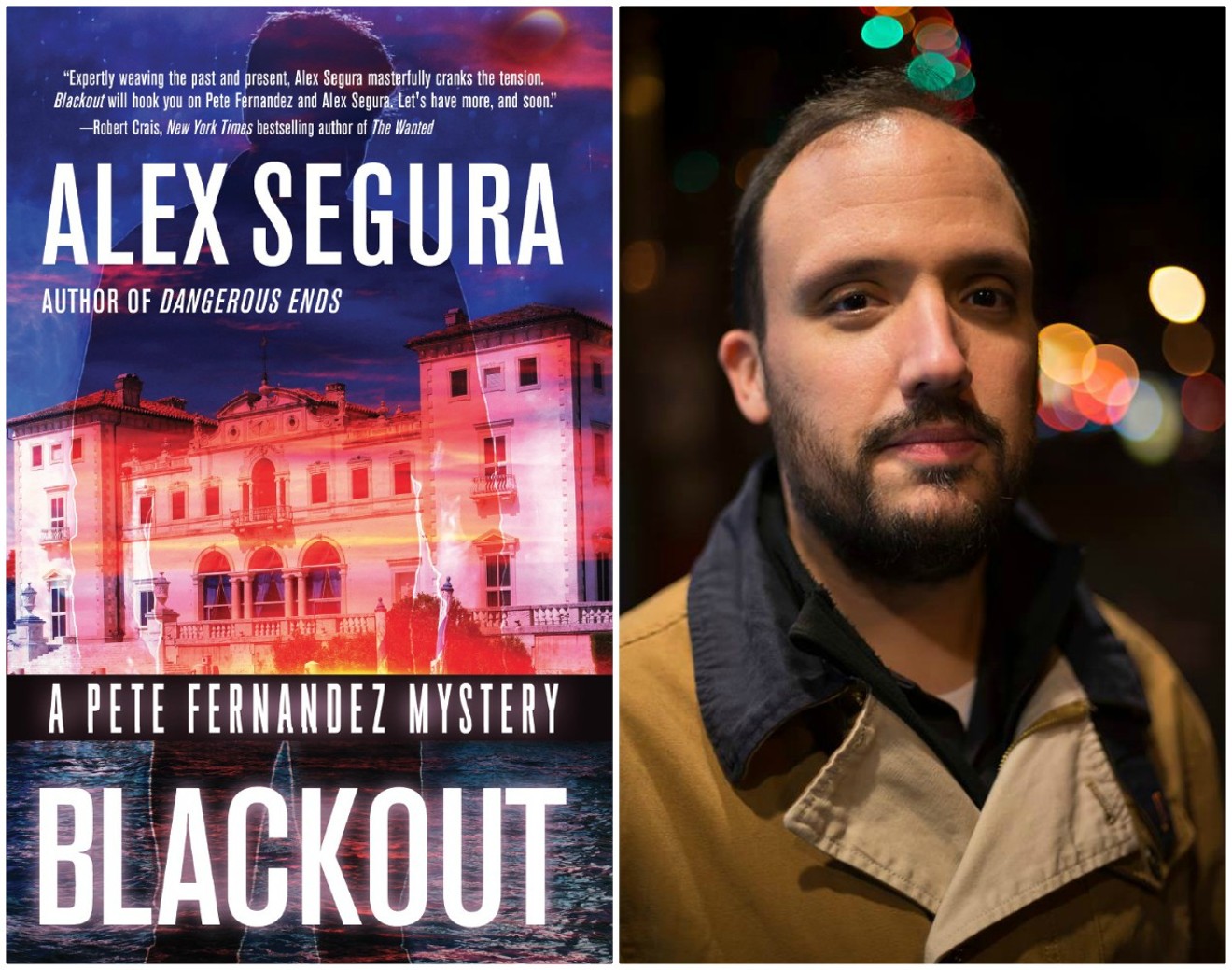 Courtesy of Alex Segura
When Pete Fernandez returns to South Florida to hunt down the missing son of a rising politician — and eventually to unravel a cold case tied to a murderous cult — he operates in a very real version of Miami. The fictional detective hangs in Wynwood, eats Cuban food at Islas Canarias, and pokes around cookie-cutter suburbs in Southwest Miami-Dade.

If Blackout, the latest Fernandez mystery from Miami native Alex Segura, reads like an obsessively sourced local tale, that's because Segura aims to portray a native slice of the Magic City.

"To me, the best part of crime fiction is often the really strong settings," says Segura, who will appear at Books & Books in Coral Gables Wednesday at 8 p.m. "The challenge is that I left Miami 12 years ago. But my family is still down there... You have to turn every vacation home into a research trip. My wife and I were walking through a park in Coconut Grove recently, and I was like, 'This would be a great spot for a murder!' My wife looked at me like I was a little crazy."

Segura worked as an editor at the Miami Herald before moving to New York, where he's now co-president of Archie Comics. His Fernandez novels, which star an alcoholic former sportswriter–turned–private investigator, give him a chance to tell gritty crime stories set in his hometown.

"The Pete Fernandez series is about his own journey as much as the mysteries," Segura says. "The series is about Pete growing up and figuring out how to navigate his life, and you can see that in Miami as a setting as well. It's a new city, but it's becoming more diverse and more complex constantly, and just it's changing all the time. I feel like every time I go back, it's different."

Segura's books often draw on real Miami history. Blackout's central plot of a deadly, politically connected cult harks back to Miami's real-life cult of Yahweh ben Yahweh, who drew plaudits and was even given the keys to the city in the '80s before federal prosecutors showed that dissidents had been murdered and dumped in the Everglades.

"I didn't remember the Yahweh story in hyper-detail, but it stuck with me as this idea of an organization that was perceived as a good thing and positive for the community before everyone realized the truth," Segura says.

Because he's a student of both South Florida crime and noir fiction and movies, New Times decided to pin Segura down on his five favorite Miami crime flicks. Here are his picks:

1. Scarface. "I read The Godfather when I was way too young. I think I was like 8 years old," Segura recalls. "That sent me into watching gangster movies as a kid, so I also watched Scarface when I was young. There was a weird disconnect... It was such a twisted take on Miami. Even as a kid, I was like, 'That doesn't look like the Miami I know.' And Al Pacino's Cuban accent is just terrible, but the movie is so much fun. It's just excess and fun."
2. Miami Blues. "I read the books first by Charles Willeford, and it's such a funny, quirky detective series at such a transitional time in Miami's history," Segura says. "You have the cocaine cowboys and the Mariel Boatlift, and Det. Hoke Moseley is the definition of a man caught in the middle. He's old-school Miami, trying to deal with the changes. I went into the movie version with some trepidation, but Alec Baldwin as a psycho is a lot of fun, and Frank Ward is a great Hoke Moseley."
3. Out of Sight. "I was tempted to cheat and also put in Jackie Brown because both are great South Florida movies based on Elmore Leonard novels," Segura says. "Elmore to me is one of the greatest crime writers of all time, and he also wrote a lot of great Florida crime... The film version is Steven Soderberg with George Clooney, and I think it was before he really became Clooney. People forget what a great actress Jennifer Lopez is. This film came before they both became super-celebrities, and the interplay really works. It's a great cast."
4. Cocaine Cowboys. "This documentary brilliantly sheds light on a period a lot of people in Miami just tried to pretend had never happened," Segura says. "It's such an intricate, interesting story that they handle so well. The journalism is so strong, but it has style too, that Miami kind of bite. Before this movie, that period in Miami was just the '80s, and everyone knew there were crime and drugs. But they retroactively defined the entire period by putting it all into one narrative."
5. Miami Vice. "I really do have some affection for the Jamie Foxx and Colin Farrell version, which has this dark undercurrent that's touched on in the TV show but was totally erased by the neon colors and the tone," Segura says. "I love the show, but that's the antithesis of Miami crime. The movie has the grit and the style, and Michael Mann is a genius."

Alex Segura. With Steph Post. 8 p.m. Wednesday, May 23, at Books & Books, 265 Aragon Ave., Coral Gables; booksandbooks.com. Admission is free.
KEEP MIAMI NEW TIMES FREE... Since we started Miami New Times, it has been defined as the free, independent voice of Miami, and we'd like to keep it that way. With local media under siege, it's more important than ever for us to rally support behind funding our local journalism. You can help by participating in our "I Support" program, allowing us to keep offering readers access to our incisive coverage of local news, food and culture with no paywalls.
Make a one-time donation today for as little as $1.