The Arsht Center will reopen to the public later this month. Photo by Tony Tur
There’s something otherworldly about taking in a live performance, whether it be theater or a singer belting out soothing notes that travel across the space like a cool breeze on a warm day. Live events in Miami are truly a special thing.

Owing to the global pandemic, many entertainment venues have had to shelter up and remain closed since mid-March. As COVID-19 restrictions in Miami-Dade County begin to ease, more and more businesses are reopening and welcoming back their loyal patrons.

Later this month, the Adrienne Arsht Center for the Performing Arts will once again open its campus to the community. With the launch of its Interlude series — a reference to the moment of pause between acts in a play or song — the Arsht Center introduces two unique programs.

Despite the unforeseen obstacles brought on by the pandemic — like revenue loss, budget cuts, and staffing adjustments — the Arsht Center has worked to keep their name relevant and current. A few weeks after the final in-person performance of Hamilton on March 13, the performing-arts center launched an online companion, Arsht at Home, where it posted everything from interviews to musical performances.

“We pivoted very quickly from being a presenter of on-stage content to becoming a producer of online content, which was a big change for us,” Zietsman says.

Now, with the launch of its Interlude series, the Arsht Center can get back to its first love: live performances.

“Live gatherings are so special and magical, and we want to bring that magic back — but safely,” the CEO adds.

The first program in the Interlude series, Arts on the Road, began October 28 with a pop-up performance by cellist Guy Michel at the Jackson Memorial Hospital courtyard. Doctors and nurses shuffling between shifts and others on their lunch break enjoyed taking a moment of zen, Zietsman recalls. People danced, others relaxed, and some sat peacefully under the shade of a nearby tree. 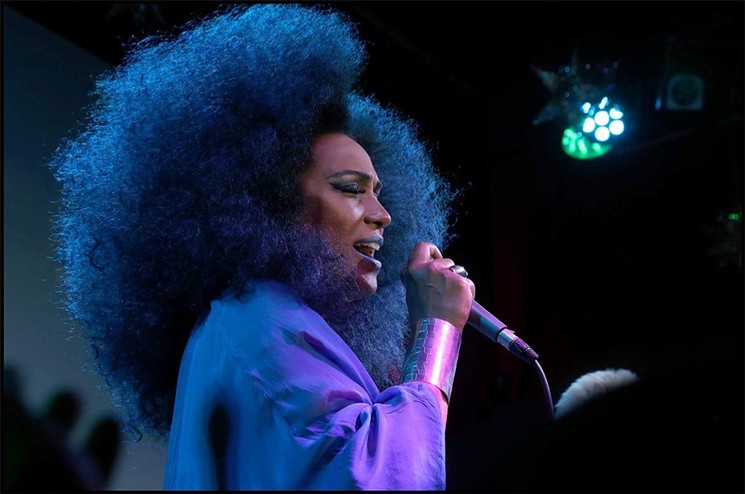 Aymée Nuviola
Photo courtesy of artist management
Every Wednesday and Saturday through the end of the year, local artists will appear at secret locations for a free street performance. Details on the exact place and time for these events will be announced via the Arsht Center’s social-media channels one day prior.

“We don’t want to attract large crowds,” Zietsman says, “but we do want people in the area to know we’re there.”

The second program tied to the Interlude series is Live on the Plaza, which features live performances on the center's grounds along Biscayne Boulevard. Four performances are scheduled in November and December, with more planned for January 2021.

Live on the Plaza events will be the first time audiences are welcomed back to the Arsht Center since the venue closed its doors in March. Space will be limited, Zietsman assures, and guests will be seated at safe distances from one another.

“People can sit out under the stars and enjoy some great Miami weather and some live artists,” he promises.

“It’s going to be a fun evening because of who she is and her music,” Zietsman says. “As a singer, she’s very colorful and full of energy.”

Programming for the new year is currently being planned with all sorts of creative avenues being explored. Since Broadway Across America already announced it wouldn’t be touring shows until mid-2021, Zietsman and his team have the entire campus at their disposal for the next six to eight months.

“We know that we can do things like progressive performances where limited numbers of people have timed entries, and they move through the building and see a series of performances. We’re also thinking about visual experiences where people can just sit and enjoy visual art or music.”

“Our priority remains connecting with the community and giving local artists opportunity while elevating them and their art,” he says.

Adrienne Arsht Center for the Performing Arts. 1300 Biscayne Blvd, Miami; 305-949-6722; arshtcenter.org.
KEEP MIAMI NEW TIMES FREE... Since we started Miami New Times, it has been defined as the free, independent voice of Miami, and we'd like to keep it that way. With local media under siege, it's more important than ever for us to rally support behind funding our local journalism. You can help by participating in our "I Support" program, allowing us to keep offering readers access to our incisive coverage of local news, food and culture with no paywalls.
Make a one-time donation today for as little as $1.