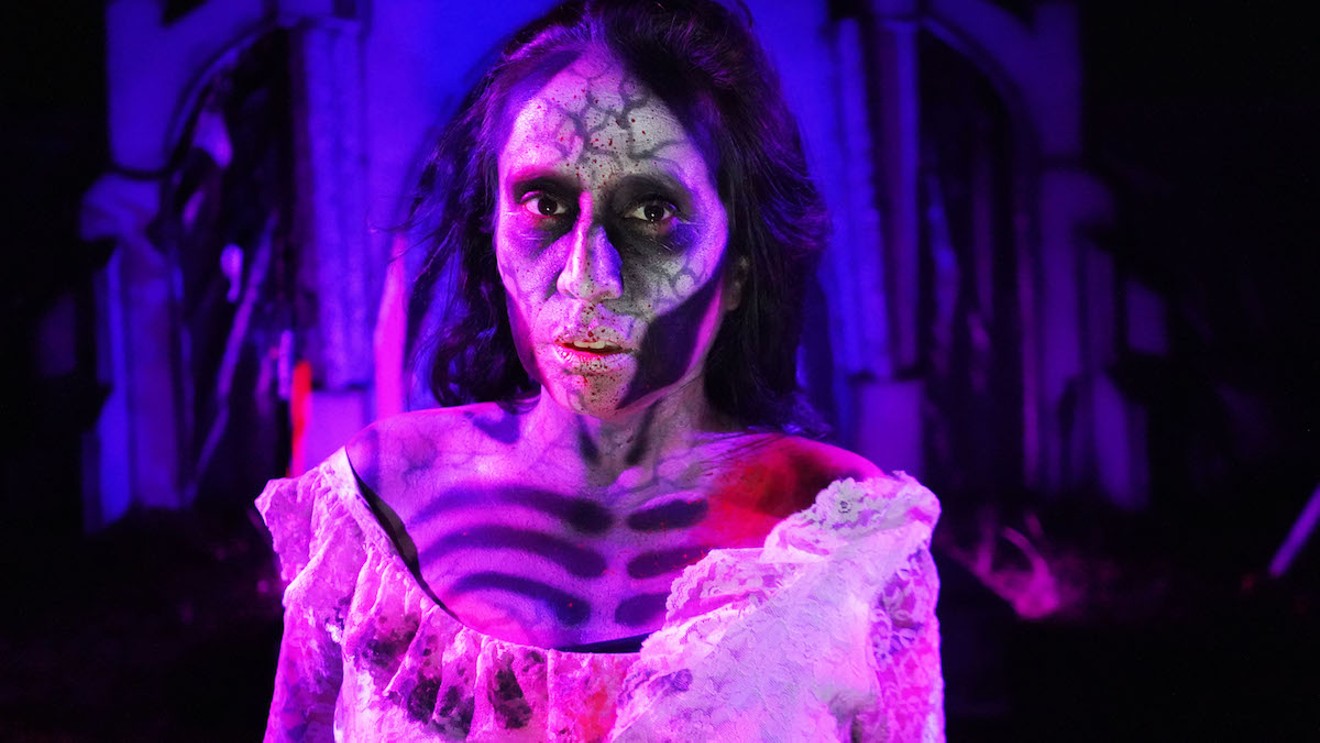 If you get lulled into a sense of security in the comfort of your car at the Horrorland Drive-Thru, you're in for a big surprise. The aim of the game is to get spooked and Live 305 Entertainment has been giving even suspecting guests nightmares for two consecutive years now. With eight drive-thru haunted houses, movie-quality makeup, and convincing special effects, the spooky event is sure to do the trick. 7 to 11 p.m. Thursday through October 31, at Aventura Mall Parking Lot, 19501 Biscayne Blvd., Aventura; 305-935-1110; thehorrorland.com. Tickets cost $48.99 to $58.99 via eventbrite.com. Olivia McAuley

On Thursday, experience Miami DanceMakers (MDM) at the Pérez Art Museum Museum for a night of live art. Taking over the museum's galleries, the dancers will perform choreography inspired by the artwork on display. MDM was launched in 2021 by acclaimed artistic director Adele Myers and sees artists paired with local cultural institutions, which offer rehearsal space and professional support. 7 p.m. Thursday, at Perez Art Museum Miami, 1103 Biscayne Blvd., Miami; 305-375-3000; pamm.org. Tickets cost $12 to $16; free for children six and under. Ashley-Anna Aboreden

The Phillip and Patricia Frost Museum of Science unveils a new exhibition on Friday, which suggests that humans may have superpowers after all — well, almost. "Skin: Living Armor, Evolving Identity," a bilingual, multisensory exhibition, delves into the incredible powers and properties of skin across an array of organisms and examines the meaning humans have associated with skin color. 10 a.m. to 6 p.m. Friday through April 3, 2022, at the Phillip and Patricia Frost Museum of Science, 1101 Biscayne Blvd., Miami; 305-434-9600; frostscience.org. Tickets cost $21.95 to $29.95; free for members and children 2 and under. Olivia McAuley

In the "before times," during Super Bowl LIV weekend, Harry Styles was set to perform at a Pepsi-sponsored event at Meridian Island Gardens on Watson Island. Unfortunately, a torrential downpour flooded the venue and forced Styles to cancel his appearance. Styles' fans are probably happy that the former One Direction member will be performing indoors at the FLA Live Arena (formerly BB&T Center) in Sunrise this time around. With Jenny Lewis serving as the opener, the Love On Tour will deliver all the watermelon sugar fans crave. 8 p.m. Friday, at FLA Live Arena, 1 Panther Pkwy., Sunrise; 954-835-7469; flalivearena.com. Tickets cost $35.25 to $165.25 via ticketmaster.com. Jose D. Duran

If you're the first one to carve a pumpkin this season, the Vampire Circus may be right for you. At this mix of circus cabaret and theater, you'll be transported to 19th-century Bohemia with all its Gothic charm. The immersive experience promises to give you a good fright, all while having fun. Expect acrobats and off-the-wall characters to get you amped for Halloween. 4 p.m. Saturday through October 31, at Under the Big Top at Aventura Mall, 19501 Biscayne Blvd., Aventura; thevampirecircus.com. Tickets cost $29.99 to $89.99 via eventbrite.com. Ashley-Anna Aboreden

Imagine walking into a bar that only plays songs by Taylor Swift and Olivia Rodrigo, and absolutely everyone else there is a dedicated fan of both. While this may sound like an uncanny fantasy that exists in our heads, it's very much a reality thanks to party promoters Le Petit Fete. Experience Swift & Sour at Gramps this Saturday and fulfill those dream-pop fantasies. You'll even get a themed can koozie to take home with you. 8:30 p.m. Saturday, at Gramps, 176 NW 24th St., Miami; 855-732-8992; gramps.com Tickets cost $15 via eventbrite.com. Ashley-Anna Aboreden

Pop-up event SortaSecret returns to indoor-outdoor venue the 94th Aero Squadron on Saturday with world-class DJ, Grammy-nominated producer, and Tool Room Records head Mark Knight. Also on the lineup: local DJ/producer Cortes and a back-to-back set by Dagher and Prieto. If you can keep a secret, expect the event to rage on until the early hours. 10 p.m. Saturday, at the 94th Aero Squadron Restaurant, 1395 NW 57th Ave., Miami; 305-261-4220; 94miami.com. Tickets cost $20 to $50 via eventbrite.com. Olivia McAuley

World Mental Health Day falls on Sunday, and if you're looking for an opportunity to be kind to your body and ground yourself, join Stay Fit 305 for an outdoor yoga flow and meditation. Led by yoga instructor Julianne Aerhee Byun, you'll be able to practice your flow on the rooftop of Shelborne South Beach. You'll also get 20 percent off food and beverage at the café or pool bar, plus you can stick around for a DJ set. 10 a.m. Sunday, Shelborne South Beach, 1801 Collins Ave., Miami Beach; stayfit305.com. Tickets cost $10 via eventbrite.com. Ashley-Anna Aboreden

Las Vegas showgirl and drag performer Dasha Sweetwaters will shake a tailfeather for the Big Bird Show at Bar Nancy on Sunday. Sweetwaters and her friends will put on an aviary-inspired show that would even put Oscar the Grouch in a good mood. There will be plenty of drag, burlesque, and aerial acrobatics with a sprinkling of deviant behavior. Expect a few of your feathers to get plucked. 7:30 p.m. Sunday, at Bar Nancy, 2007 SW Eighth St., Miami; nancy305.com. Tickets cost $25 to $35 via eventbrite.com. Jose D. Duran

The South Miami-Dade Cultural Arts Center presents a free virtual screening of the Nicholas Bruckman-directed documentary Not Going Quietly. Available to stream through Wednesday, the acclaimed film follows young father and recently diagnosed ALS patient Ady Barkan as he is propelled to fame following a confrontation with Arizona Sen. Jeff Flake and is inspired to use the time he has left to campaign for national healthcare reform. Available to stream through Wednesday; smdcac.org. Admission is free. Olivia McAuley

The Adrienne Arsht Center's Live on the Plaza series kept many a Miamian sane during the pandemic, offering a safe outdoor environment to take in live music. The series has returned, and on Tuesday, it welcomes funk and soul act Scone Cash Players to the Thomson Plaza for the Arts. The outfit is led by Adam Scone, who has worked with legendary Daptone Records artists the Sugarcane Three, Lee Fields, and the Dap-Kings queen herself, the late Sharon Jones. 7:30 p.m. Tuesday, at the Adrienne Arsht Center for the Performing Arts, 1300 Biscayne Blvd., Miami; 305-949-6722; arshtcenter.org. Tickets cost $20 to $80. Jose D. Duran

Take advantage of the cooling temperatures by taking the little ones to Storytime at the Underline, presented by Books & Books and Friends of the Underline. This month's book theme is, naturally, a fall-focused Halloween affair, with the kid-friendly Hardly Haunted by Jessie Sima, Room on the Broom by Julia Donaldson, and There's a Witch in Your Book by Tom Fletcher. The three books will be read aloud by a teen volunteer, followed by an allotted playtime. 4 to 5 p.m. Wednesday, at the Underline Brickell Backyard, SW First Avenue and Eighth Street; 305-603-9895; theunderline.org. Admission is free with RSVP via eventbrite.com. Olivia McAuley

Interested in the art world or looking for a night of conversational stimulation? Locust Projects and Oolite Art come together this week for another segment of "Talks: Top Curators on Contemporary Art" at the Little Haiti Cultural Center. On Wednesday, a virtual discussion will be held with Lynne Cooke, senior curator for special projects in modern art for the National Gallery of Art in Washington, D.C. 7 p.m. Wednesday, at Little Haiti Cultural Center, 212 NE 59th Ter., Miami; 305-960-2969; miamigov.com/lhcc. Admission is free with RSVP via eventbrite.com. Ashley-Anna Aboreden