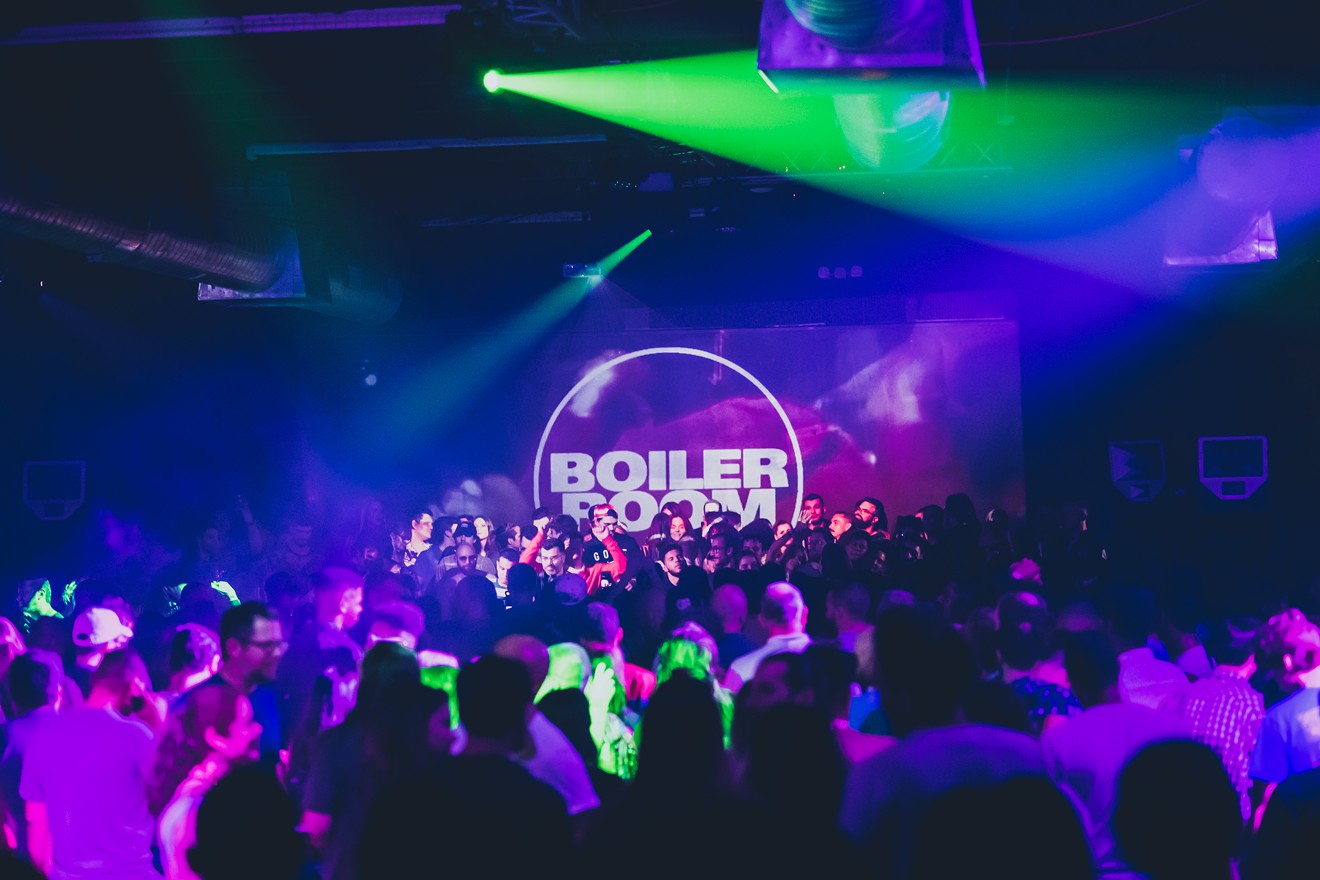 One of the world's largest LGBTQ events is prepared to land in Miami this Thanksgiving weekend in the form of the ultimate gay dance festival: Circuit Fest Miami. With five massive evening events featuring topnotch production, at least three daytime parties — including a legendary Beach Party — international DJs, and thousands of Circuit partygoers, it's hard to conceive how the second iteration of the fest could be anything but a smashing success. 10 p.m. Thursday, November 28, to 10 p.m. Monday, December 2, at multiple locations in Miami Beach. Tickets and passes cost $35 to $720 via circuitfestival.net. Olivia McAuley

Why fight soccer dads over TV deals when you can participate in Record Store Day Black Friday instead? The day after Thanksgiving, Miami's best record stores will offer deals, fun, and exclusive releases. Sweat Records will open at 8 a.m. and offer 10 percent off all music all weekend (excluding RSD special releases), along with food and drinks. Meanwhile, Technique Records, also opening at 8 a.m., will continue to celebrate its new location with DJ sets, food from Gramps and Pizza Tropical outside, as well as storewide sales on records and gear. 8 a.m. Friday at Sweat Records, 5505 NE Second Ave., Miami; 786-693-9309; sweatrecordsmiami.com; and Technique Records, 880 NE 79th St., Miami; 786-717-6622; techniquerecords.com. Admission is free. Read more about Record Store Day on page 16. Douglas Markowitz

After gracing III Points 2019 with its presence, Boiler Room is once again collaborating with the festival and promoter to present Boiler Room Miami: III Points. Black Friday Rave — the warehouse party organized last year by Miami DJs including True Vine and Sister System —will get an extra boost from the traveling dance music-streaming platform. The organizers are keeping details close to the chest — the element of surprise is part of the appeal here after all. 9 p.m. Friday at2060 NW First Ave., Miami; boilerroom.tv. Tickets cost $35 via dice.fm and $40 at the door. Read more about Black Friday Rave on page 23. Douglas Markowitz

The party continues with MC and selector Walshy Fire this Friday as Miami's long-standing party Peachfuzz celebrates its eighth year. The DJ who injected extra authenticity into Diplo's dancehall project Major Lazer will bring the jams all night long with the help of special guests. This will be one anniversary worth remembering. 11 p.m. Friday at the Ground, 34 NE 11th St., Miami; thegroundmiami.com. Tickets cost $10. Olivia McAuley

Written by James Grippando, Watson is a new play based on the life of IBM founder Thomas J. Watson Sr. The story delves into how Watson's pursuit of profit led him to provide the Nazis with IBM's pre-computer technology for the purpose of identifying Jews. In 1937, Watson became the first American to receive the Order of the German Eagle award, one of the highest honors Adolf Hitler ever bestowed on a non-German. The work will premiere at GableStage, one of the longest-running theater companies in South Florida. 8 p.m. Friday at GableStage at the Biltmore, 1200 Anastasia Ave., #230, Coral Gables; gablestage.org. Tickets cost $50. Olivia McAuley 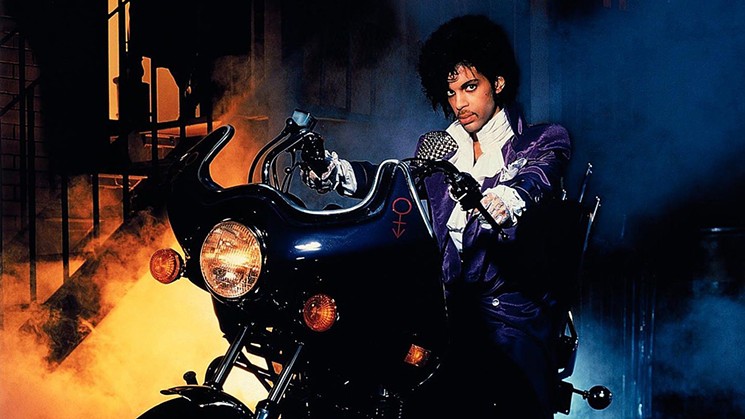 The forecast calls for Purple Rain this Saturday.
Photo courtesy of Warner Bros.

After Thanksgiving, you'll probably be looking for any excuse to escape your awful, overbearing relatives who've spent years degrading what was once a cherished family tradition (at least that's how you feel about them after your uncle shows up in a Blue Lives Matter shirt or whatever). What you need is a real rain, a cleansing rain — a Purple Rain. Lucky for you, Prince's problematic but iconic film will play at Gables Cinema this Saturday, allowing you to sit back and/or rectify the cardinal sin of having never seen the Purple One's star-making accompaniment to his classic album. Plus, it's playing in 35mm! 11:30 p.m. Saturday at Coral Gables Art Cinema, 260 Aragon Ave., Coral Gables; 786-385-9689; gablescinema.com. Tickets cost $8. Douglas Markowitz

You can enjoy brunch and contemporary art in a curated setting this Miami Art Week. The public event was conceived by Mindy Solomon and the folks at Progressive Art Brunch, who bring participating galleries together for several Sundays throughout the year. The event highlights the programming at each participating venue and gives visitors a more intimate look at the exhibitions on display. The galleries are located in the Performing Arts, Little Haiti, and Little River Arts Districts, and a shuttle bus provides transportation to each. 11 a.m. Sunday beginning at Mindy Solomon Gallery, 8397 NE Second Ave., Miami; 786-953-6917; mindysolomon.com. Admission is free. Olivia McAuley

Eighties punk band the Queers will take over Revolution Live, where they'll showcase the foulmouthed, consciously edgy lyricism that saw them shoot to fame all those years ago. Also including performances by local bands Riot Agents and Die High, the old-school show is unlikely to disappoint and at the very least promises to deliver goofy humor and high-energy showmanship. 7 p.m. Sunday at Revolution Live, 100 SW Third Ave., Fort Lauderdale; 954-449-1025; jointherevolution.net. Tickets cost $13 to $15. Olivia McAuley 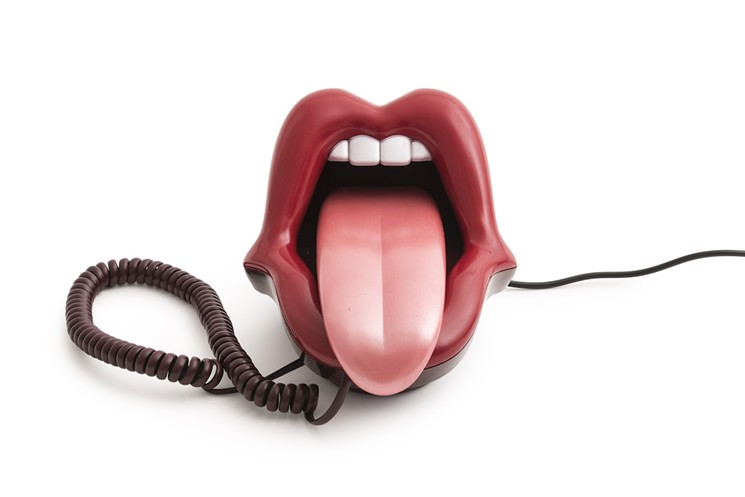 Don't you crave those moments when your heckin' good doggo peers at the furry visage of another canine on the TV screen and goes ballistic? How did he get in there? What's going on?! Ruff, ruff, ruff, ruff! That's probably what the doggo is thinking. Anyway, there will be lots of dogs, from big 'ol woofers to the smol-est puppers, at Roof Top Cinema's Art Pawsel Edition, where the Canine Film Festival and D.O.G. Hotels will present a series of short films featuring man's best friend. Bring a toy for the puppy toy drive, because 'tis the season after all. 6 p.m. Tuesday at No. 3 Social, 50 NW 24th St. Rooftop, Miami; 305-748-4540; no3social.com. Tickets cost $10 via eventbrite.com. Douglas Markowitz

At Locust Projects this Tuesday, Trenton Doyle Hancock will present his new installation, I Made a Mound City in Miami-Dade County, the artist's first project since opening his major survey at MASS MoCA in Massachusetts this past spring. Hancock's Moundverse, the fantastical creation the artist began at the age of 10, has proliferated into an expansive alternate universe in the years since its humble beginnings. The event will allow attendees to meet the artist, check out a pop-up comic-book shop organized by Radiator Comics, and enjoy craft beer courtesy of Concrete Beach. 7 p.m. Tuesday at Locust Projects, 3852 N. Miami Ave., Miami; 305-576-8570; locustprojects.org. Admission is free. Olivia McAuley

And so it begins. You'll see a lot of art this week, and even if you get too drunk or high to remember all of it (not that we're advocating you do that), it's probably good to start small. Prism Art Fair might be just what you're looking for, especially if you're looking for something new or want to prime yourself before checking out Art Basel Miami Beach. The fair focuses on artists from Africa or of African descent, meaning you'll probably see contemporary art very different from what you're used to seeing. 10 a.m. to 7 p.m. Wednesday through Sunday at the Alfred I. duPont Building, 169 E. Flagler St., Miami; prizmartfair.com. Tickets cost $15 to $200. Douglas Markowitz Remember that scene in The Devil Wears Prada where Miranda Priestly, the Anna Wintour stand-in played by Meryl Streep, explains how fashion trends work, how everything the haute-est haute couture brands put in Vogue filters down, and how they eventually influence everything we wear? Design Miami is like that, but for things that might end up in your home. You can be sure that whatever wacky shelf or conceptual table you spot while wandering through the show tent will be in nightclubs, then restaurants, and, before you know it, IKEA, where you'll finally be able to get a shoddy fiberboard version of it in five years. Fun! 1 p.m. Wednesday to 6 p.m. Sunday in the parking lot of the Miami Beach Convention Center, Convention Center Drive between 18th and 19th Streets, Miami Beach. Tickets cost $32 to $225 via miami2019.designmiami.com. Douglas Markowitz

You'll definitely end up at Club Space sometime this week, so why not get it out of the way early? Headlining the first night of Space Basel, Claude VonStroke and Green Velvet will play a back-to-back set as Get Real. The duo comes to Miami often, and it's always a good time. Steve Darko and Mason Maynard will also perform that night, which, because this is Space, will go well into the next day. Every day is Saturday during Basel, baby! 11 p.m. Wednesday at Club Space, 34 NE 11th St., Miami; 786-357-6456; clubspace.com. Tickets cost $15 to $20 via eventbrite.com. Douglas Markowitz