Mathews Brewing Co. owner and brewer Dave Mathews says he originally planned to launch his business in West Palm Beach but was drawn south thanks to Lake Worth's "funky, cool vibe" and the city's business-friendly atmosphere.

"Now I'm hoping to lead the charge in revitalizing this area by motivating other like-minded small businesses to come here,” Mathews says. "I see nothing but potential."

The establishment will be not only Lake Worth's first brewery but also one of the first in South Florida to offer patrons a dedicated cask ale program in addition to a rotating selection of beers brewed in-house. Cask ales, also known as "real ale" in the United Kingdom, are unfiltered and unpasteurized beer conditioned (including secondary fermentation) and served from a cask without additional nitrogen or carbon dioxide pressure. 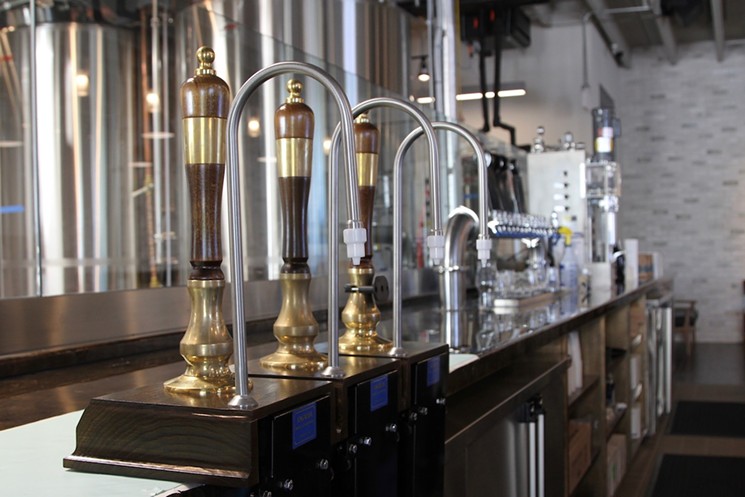 Mathews Brewing Co. will offer Florida's first dedicated cask ale program.
Photo by Nicole Danna
Many of the recipes for Mathews' core beers are his own. A longtime homebrewer, he sold a business in engineering to open Lake Worth's first brewery. Mathews has been working alongside lead brewer James Retzler, formerly of Big Blue Brewing and Due South Brewing, and assistant brewer Kaleb McCracken, to create each of the core, seasonal, and experimental one-off beers year-round.

According to Mathews, the gas-fired, ten-barrel brewhouse allows for step and decoction mashing and uses a reverse-osmosis water-filtration system that will enable the team to produce custom water profiles to replicate Old-World beers.

"Our goal is to make solid, quality beer that's as true-to-style as possible," says Mathews, whose late Jack Russel terrier serves as the official brewery logo. "We can literally brew anything here, and I plan to offer a broad range of styles, from an American IPA to traditional British-style cask ale."

The Mathews Brewing Co. Lake Worth taproom.
Photo courtesy of Mathews Brewing Co.
The 117-seat bar and taproom will offer 14 taps pouring Mathews Brewing Co. beers alongside several guest taps. Four additional beer engine handles, a traditional British beer-dispensing device, will be used to pump all cask-conditioned ales, including a dark mild and English IPA, from the cellar to the bar. The brewery will also offer a large outdoor beer garden with a live-music stage and dog-friendly patio.

"I've always been drawn to true, English-style cask ales," Mathews says. "You're getting the true flavor of the beer without the excess carbonation, allowing the malt and hops to really shine. It's something you don't find at most microbreweries, and it was something I wanted to offer here in South Florida. It's how beer was originally served, and I want people to experience that."

Parking for Mathews Brewing Co. can be found on the street or in two lots off South H Street north of the brewery. The grand opening will take place in early 2018 when the brewery's beer garden, patio, and stage are complete.