Eating House chef/owner Giorgio Rapicavoli will open his latest project this weekend: Luca Osteria, named after his two-year-old son. Located on Giralda Avenue, Luca Osteria brings an Italian-inspired menu to Coral Gables, including a selection of house-made pastas — dishes such as linguine alle vongole with Florida clams, wine, lemon, and pickled garlic butter; an entrée of pappardelle ragù Bolognese with beef short ribs, mortadella, and nutmeg; and another main course of orecchiette with broccoli coated with black olive, pecorino, and Calabrian chili ragù. Pasta aside, a signature Luca burger is made with dry-aged beef, red-wine onions, fontina cheese, and black truffle. Traditional and natural wines will be offered, along with a list of classic and signature cocktails. Opening at 5 p.m. Friday, February 26, at 116 Giralda Ave., Coral Gables; 305-381-5097; lucamiami.com. 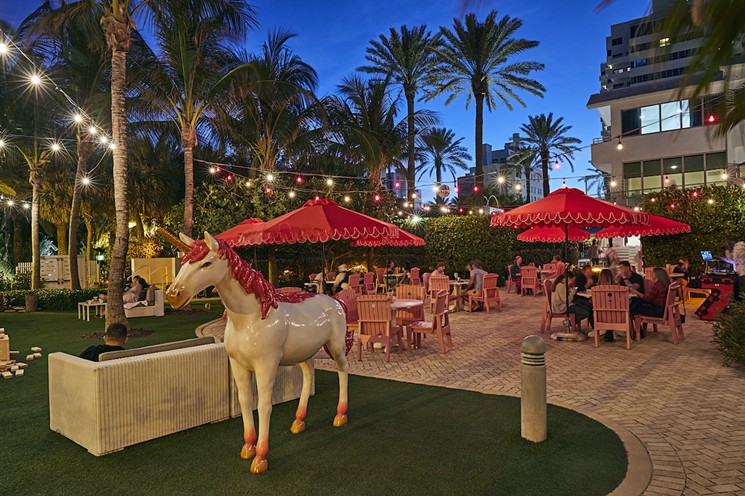 Sweet Beach at the Shelborne Hotel
Photo by Michael Pisarri

Brunch with your pup this weekend.
Photo courtesy of Brimstone Woodfire Grill

Bark 'n' Brunch is back at Brimstone Pines. This Saturday, enjoy brunch dishes and bottomless mimosas while the pups chow down on a selection of specialty bowls and "puptails" (puppy cocktails) made from Brimstone's house-made bone broth. A limited dog-friendly food menu will also be available, featuring "Awoof con pollo," with chicken, rice, and seasonal veggies; "filet pupnon," with petit filet tips and sweet potatoes; and "No Cats Allowed," with egg whites, smoked salmon, and sweet potatoes. 11 a.m. to 2:30 p.m. Saturday, February 27, at Brimstone Pines, 14575 SW Fifth St., Pembroke Pines; 954-430-2333; brimstonewoodfiregrill.com. Admission is free; brunch is pay as you go. 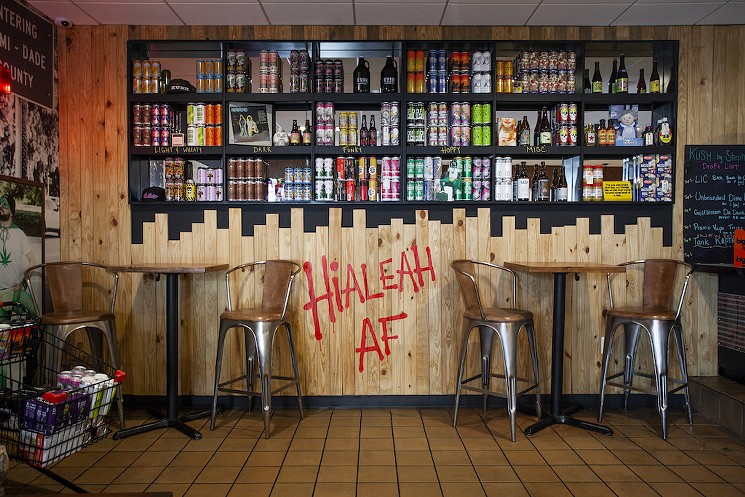 This Sunday, stop by Kush Hialeah for the first edition of "Kok Sh*t Bingo." Purchase drinks to earn a free raffle ticket with a corresponding number. Then, at exactly 3:05 p.m., a live chicken will be placed in an outdoor chicken coop with a bingo board below it. Whatever number the chicken poops on is the winner, with the entire process running anywhere before five minutes to as long as it takes for the chicken to poop. Raffle tickets are limited but can be obtained with the purchase of any featured cocktail by Skyy Vodka (one ticket per drink) or by donating to Miami Animal Rescue, which earns two tickets. Prizes include a $50 Kush Hospitality Group gift card, $50 Kush Hialeah bar tab, and swag bags. Plus, enjoy a live bluegrass performance by Lonewolf and indulge in a whole gator served Caja China-style. Note from the Kush team: No chicken will be harmed or served during the event. Beginning at noon, Sunday, February 28, at Kush Hialeah, 1000 E 16th St., Hialeah; 305-887-8863; kushhospitality.com.

Pastelito Papi will be among more than a dozen vendors at this weekend's South Beach Wine & Food Festival Artisan Food Market on Lincoln Road.
Photo courtesy of Paselito Papi

The South Beach Wine & Food Festival's (SOBEWFF) monthly market, launched in January to help support local restaurants and businesses hurt by the pandemic, will return Sunday with a new line-up of vendors and a sponsorship from Popeyes. Up for grabs are 500 free fried-chicken sandwiches courtesy of Popeyes, alongside bites from Paleta 305, Honeybee Doughnuts, Bagel Balls, Pastelito Papi, and Taquiza Tacos, among others. The monthly outdoor market, a collaborative effort from Lincoln Road BID board member Lyle Stern and SOBEWFF founder Lee Brian Schrager, will run the last Sunday of every month leading up to the 2021 festival, which has been pushed back from its traditional mid-February time slot to the weekend of May 20-23. 11 a.m. to 2 p.m. Sunday, February 28, located on Michigan Ave. between Lincoln Lane North and Lincoln Lane South; sobewff.org/market.
KEEP MIAMI NEW TIMES FREE... Since we started Miami New Times, it has been defined as the free, independent voice of Miami, and we'd like to keep it that way. With local media under siege, it's more important than ever for us to rally support behind funding our local journalism. You can help by participating in our "I Support" program, allowing us to keep offering readers access to our incisive coverage of local news, food and culture with no paywalls.
Make a one-time donation today for as little as $1.