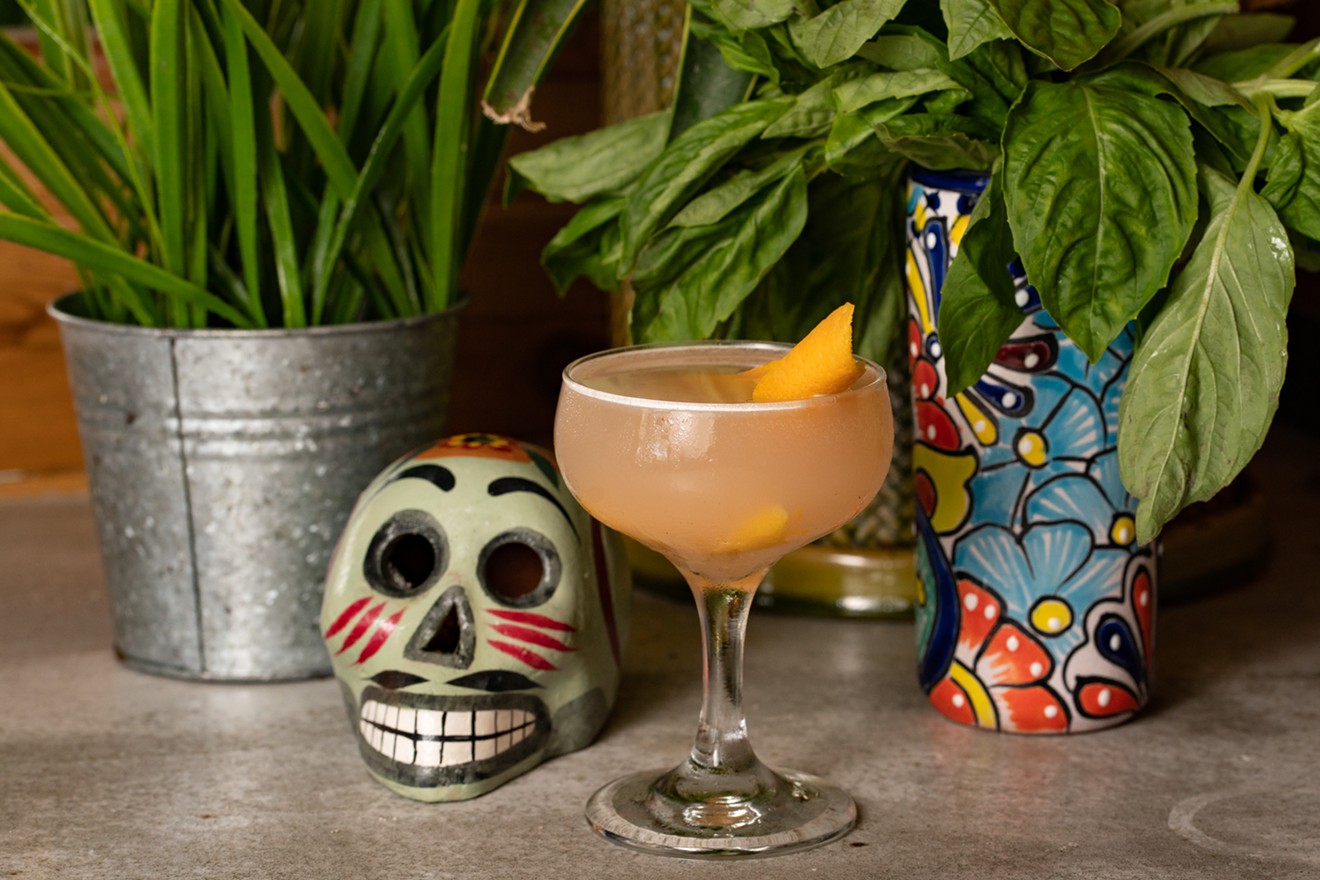 Taquiza's Forbidden Fruit cocktail ($12). Anthony Nader /52 Chefs
There’s more than just tacos and totopos at Taquiza. Guests at the popular taco joint can now pair its authentic masa with a number of new cocktails created by Taquiza’s head bartender, Katie Slichter. She has put together a fresh cocktail menu nodding Mexican culture while also contributing to the zero-waste movement. To reduce waste, Slicher uses whole fruits — including the zest and rind — in her drinks, and garnishes come from the kitchen.

Slichter got her start in dive bars before doing some work with Bar Lab. Asked about creating her first full-fledged cocktail menu at Taquiza, she says, “It was really exciting to get the chance to play around with so many ingredients. I wanted to highlight the flavors found in the restaurant but also challenge myself to use them in ways people wouldn’t normally expect.”

A good example of her using the restaurant's flavors as inspiration is the I Love You... Azafran ($12). This variation on a margarita contains traditional spices and herbs used in Taquiza’s braised meats, saffron-infused tequila, honey syrup, and lime. The drink is topped with an edible dehydrated corn wheel sourced from each day’s left-over elote. The crunchy mini corn wheel adds a light sweetness to the drink. The cocktail's name is also a play on words — azafran is Spanish for "saffron."

Other specialty cocktails are Forbidden Fruit ($12), a riff on a classic paloma, made with tequila, brown sugar cordial, grapefruit soda, grapefruit juice, and lime. All parts of the grapefruit are used, including the zest and juice. It's topped with Jarritos grapefruit soda and garnished with an edible dehydrated grapefruit wheel. The Something Tonic Lime ($10) comes with a choice of gin or vodka, paired with Topo Chico Mexican tonic and lime and topped with a handful of edible flowers for flair.

Climate Control ($13)
Anthony Nader /52 Chefs
Another thoughtfully named cocktail is the Anochezer ($14), meaning "twilight" in Spanish. This layered cocktail progresses from light to dark and is made with mezcal, allspice-and-pomegranate molasses, fresh orange juice, ginger beer, and lime. Think tequila sunrise, but use mezcal instead.

Along with offering the eight new signature cocktails, Taquiza has expanded its margarita lineup by serving a classic margarita on tap ($11 glass or $44 pitcher); a spicy margarita ($13) with reposado tequila, chile de arbol, agave, and fresno tincture; and a refreshing frozen margarita ($12) with blanco tequila, simple syrup, and lime.

Those looking for a deal can stop by during Taquiza's weekday happy hour. Monday through Friday from 4:30 to 7:30 p.m., look for $6 margaritas, $5 micheladas and sangria, and pitchers of cocktails ($20 to $24). The happy hour is available at the restaurant's North Beach and South Beach locations.

Taquiza. 1351 Collins Ave., Miami Beach; 305-203-2197; and 7450 Ocean Ter., Miami Beach; 786-588-4755; taquizatacos.com.
KEEP MIAMI NEW TIMES FREE... Since we started Miami New Times, it has been defined as the free, independent voice of Miami, and we'd like to keep it that way. With local media under siege, it's more important than ever for us to rally support behind funding our local journalism. You can help by participating in our "I Support" program, allowing us to keep offering readers access to our incisive coverage of local news, food and culture with no paywalls.
Make a one-time donation today for as little as $1.