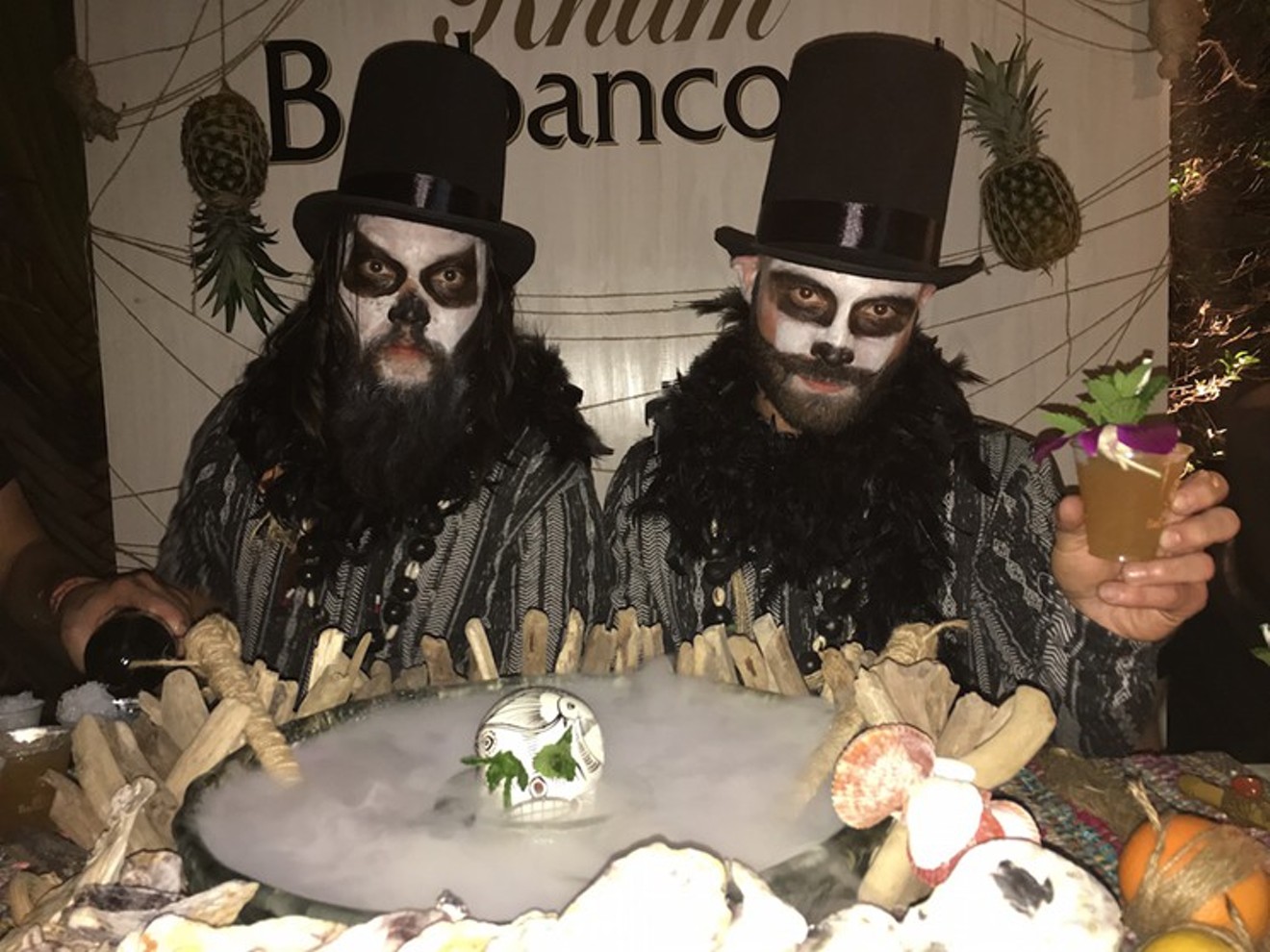 You want this guy to give you a drink — and a nightmare. Laine Doss

Monica McGivern
Where's the Booze?
You would think that the name "South Beach Wine & Food Festival" would indicate free-flowing vino. That wasn't the case at Fort Lauderdale's Seaside Eats, where there was a crippling inaccessibility to alcohol. Guests were granted a plastic wine glass necklace for easy carrying, but most festivalgoers wandered around with it empty while they frustratingly searched for a wine stand. They were few and far between, with outrageous lines. Note to organizers for next year: better access and more servers needed.

Laine Doss
Food for Fido, None for Humans
Saturday's Yappie Hour was nirvana for those who prefer friends of the four-legged variety. And though there was plenty of Tito's vodka and wine, there was a serious lack of people food. Only cake pops were seen, along with doggie treats. This walk-around event needed something more noshable than sweets. After two cocktails, the Rachael Ray Nutrish doggie chow was looking mighty good.

Zachary Fagenson
Chicken Coupe Hotness
This year's Chicken Coupe featured plenty of Nashville hot chicken. That's not the only thing that was hot, apparently. Word has it that the A/C wasn't working properly, giving guests much more than meat sweats.

Laine Doss
Valerie Bertinelli Does Not Age
For some of us, Valerie Bertinelli will forever be Barbara Cooper in the '70s sitcom One Day at a Time, in which she played a perky teen. Now the Hot in Cleveland star is also the host of Valerie’s Home Cooking. At Italian Bites on the Beach, Bertinelli greeted fans while looking fabulous — too fabulous, in fact. The actress looks exactly as she did 40 years ago. Either we should be eating whatever she's cooking, or she's SOBEWFF's first vampire celebrity.

Correction: An earlier version of this story incorrectly stated David Grutman of the David Grutman Experience was not present at Sunday's Grand Tasting Village. He was there.

Zachary Fagenson became the New Times Broward-Palm Beach restaurant critic in 2012 before taking up the post for Miami in 2014. He also works as a correspondent for Reuters.
Contact: Zachary Fagenson
Follow:
Twitter: @ZachIsWeird
Alona Abbady Martinez lives in Plantation. She writes about food and family on her blog, Culinary Compulsion, and is working on her book, My Culinary Compulsion, a global food memoir with recipes."
Follow:
Twitter: @alonamartinez