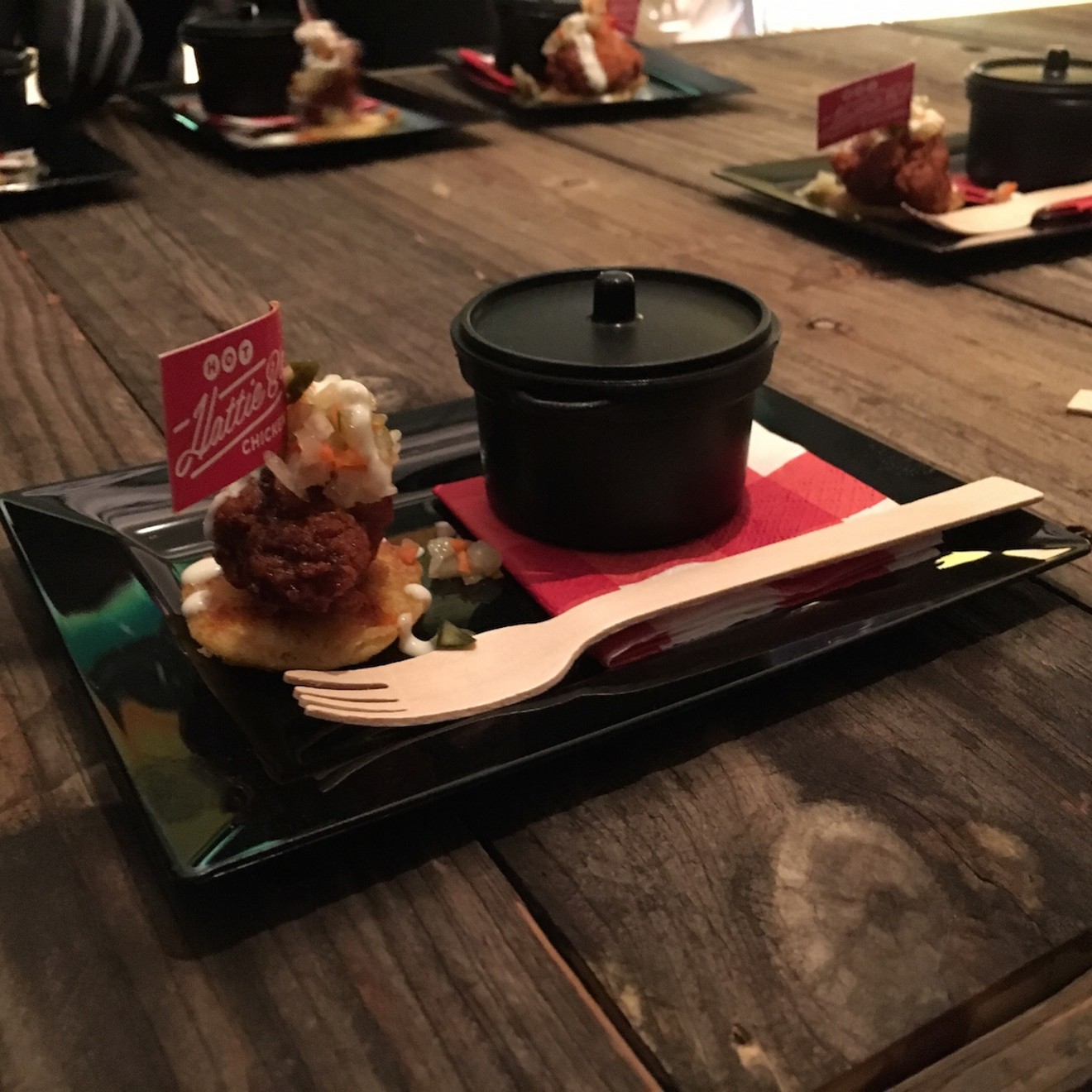 Though it seemed little could top last year's event, where Daniel Boulud fed fried chicken thighs to the iconic portrait artist Chuck Close, this year's festival brought together some of the nation's top fried-chicken experts to ply their wares to the rich and ravished.

In keeping with trends, the event offered guests a greeting from Nashville's Hattie B's Hot Chicken, whose executive chef, John Lasater, gleefully dished out plate after plate of his tongue-searing poultry. The accompanying cornmeal Johnny cake and a small dish of braised collard greens helped turn down the heat so attendees could return for another bite.

Whereas chef after chef seemed willing to use only chicken thighs last year, wings and legs were all the rage this go-round. New York City's Hill Country Chicken served crisp drumettes slightly sweetened with a pepper jelly and rested atop intensely cheesy grits. Pig & Khao served twice-floured, twice-fried drums and flats with an unmistakeable hit of fish sauce in the curry that doused them.

Pig & Khao's curry wings.
Photo by Zachary Fagenson
Elsewhere, chefs proffered straight-up white meat or broken-down chicken parts. Richard Hales of Bird & Bone served his version of Nashville hot chicken, on the slightly sweeter side, atop half-moons of Zak the Baker sourdough and crisped Brussels sprouts reminiscent of those found at his Sakaya Kitchen. Hefty portions of Indonesian fried chicken from Boston's Myers + Change came crusted with an assertive blend of turmeric, lemongrass, and bird's eye chilies, served atop a ginger-sesame-flecked waffle that was a welcome change from the traditional version.

Among the best bites were Phuc Yea's fried shards of chicken skin dusted with salt-and-pepper spice, sriracha aioli, and a smattering of fresh herbs to cut all the fat. Nearby, Michael Solomonov's lightly fried hunks of white meat frosted in pungent za'atar were tucked into fluffy sliders with spicy tahini and chopped Israeli pickles. It was a little something to get people excited for his forthcoming Wynwood location of Federal Donuts, but it also left fans hoping he'll open another outpost of his fast-casual hummus joint Dizengoff down here.

Hill Country Chicken's drumettes with sweet grits.
Photo by Zachary Fagenson
Fatty and happy with greasy lips and the onset of champagne headaches, guests departed as the night's DJ began getting serious with the bar mitzvah classics. Art Smith and Ash Fulk of Hill Country Barbecue Market were coordinating some kind of dance circle. And sauntering through the W's lobby and glancing into the Dutch, we couldn't help but wonder what it would be like to take the $325 ticket (the festival supplies New Times free of charge) and order 54 of Carmellini's little oyster sandwiches.