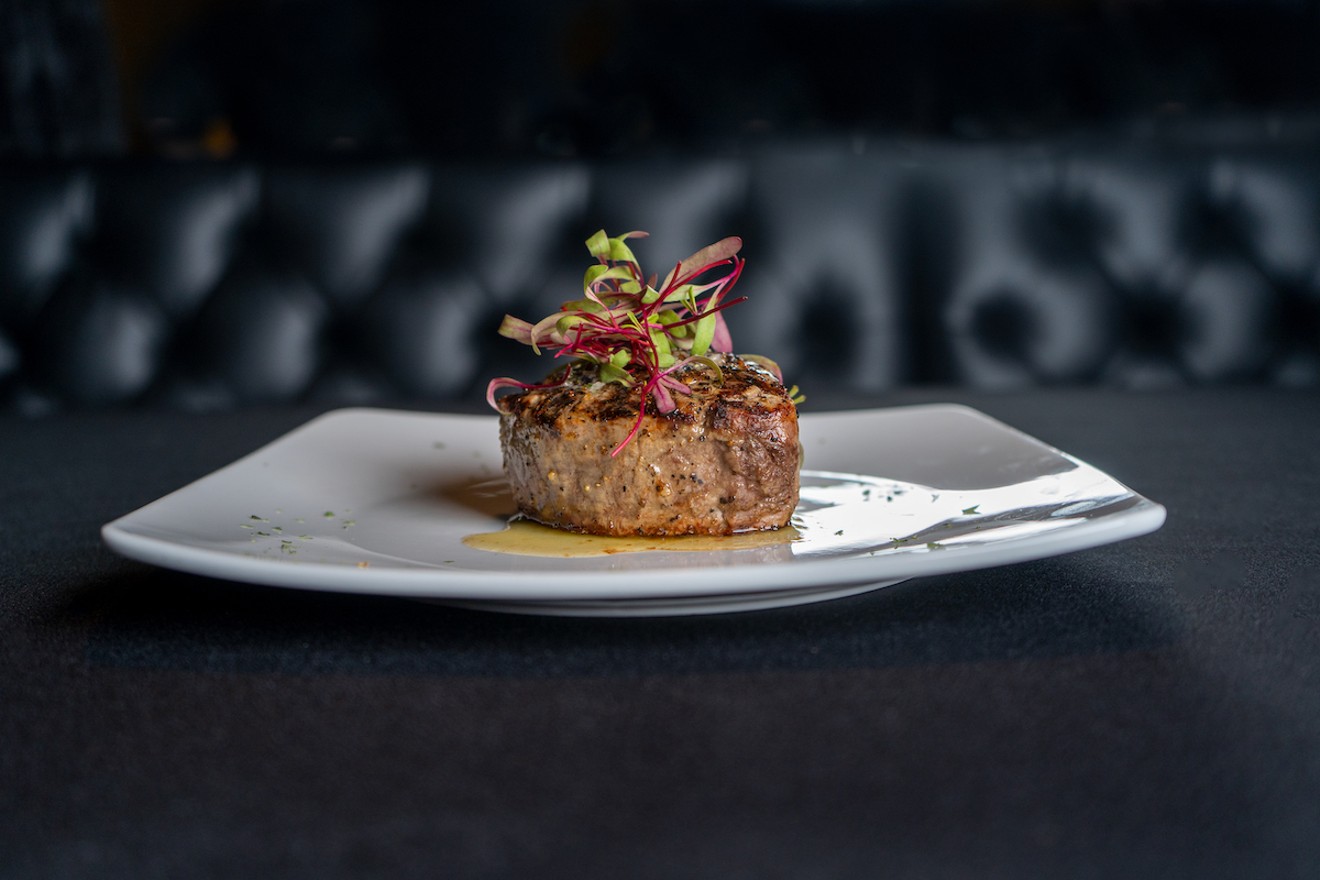 Rick's Steakhouse and Lounge will open this week inside Scarlett's Cabaret. Photo courtesy of RCI Holdings
This week, you can visit Scarlett’s Cabaret, the adult nightclub in Hallandale Beach, for a chance to ogle a different type of eye candy.

On Wednesday, May 4, RCI Holdings — the company that owns more than three dozen strip clubs and sports bars across the nation, including Tootsie’s Cabaret in Miami — will open a first-of-its-kind steakhouse inside Scarlett's.

Rick’s Steakhouse and Lounge will offer guests a chance to experience a high-end, late-night dining experience whether they’re partying at the club or just out for a meal, says RCI Management president Ed Anakar.

“We always felt there was something missing at Scarlett’s. We envisioned a space where you could really relax, where the music wasn’t as loud, and you could enjoy a good meal or a cigar,” Anakar tells New Times. “After seeing the success that we were having with Rick’s Cabaret, we decided to bring that same experience to Miami.”

Separate from the main club — although located in the same building in a space previously used for private events — Rick’s offers guests an authentic restaurant and upscale lounge ambiance.

But can you partake of both varieties of fleshy offerings — Rick's and Scarlett's — simultaneously?

Not exactly. While Rick’s will offer guests a chance to experience a different side of Scarlett’s, the live action will remain at the club next door, Anakar says, adding that table reservations are required for dinner or bottle service unless the guest is already at Scarlett’s. Rick's Cabaret will offer guests a chance to dine until the early morning hours.
Photo courtesy of RCI Holdings
“We wanted it to have that Miami feel — think a more luxurious lounge and ambiance,” Anakar says. “Now you can have a night out at the club, and go next door to have a really good meal or just relax. It’s the best of both worlds.”

Rick’s menu and the kitchen are helmed by executive chef Bryan Doell, who previously held the position at The Palms Grille steakhouse inside Fort Lauderdale’s now-shuttered Solid Gold.

While you can still order a burger, sandwich, or flatbread from the regular menu served at Scarlett's, at Rick’s you can find a menu that focuses on high-end meats, seafood, and classic steakhouse sides.

“We focused on developing a number of high-quality, standout dishes,” Doell says. “And while steak is the star of the show, we wanted to make sure there was something for everybody.”

Another aspect that makes Rick’s stand out: the hours. Open from 8 p.m. to 5 a.m., the venue will be one of the only steakhouses in South Florida where you can dine well past midnight; The kitchen closes at 4 a.m.

“Trying to find somewhere you can order a steak, have a high-quality experience, or sit down to dinner past 11 p.m. — your options are always limited,” Anakar says. “We’ve had tremendous success in New York with these hours and think it will work here, as well.”

Anakar notes that in addition to its menu and selection of top-shelf spirits, wines, and cigars, the new establishment will be one of only a handful of South Florida restaurants that accepts Bitcoin.

“I think Rick’s will be a very special addition for Broward County. There’s nothing like it around here,” Anakar sums up.

Rick's Steakhouse and Lounge. 2920 SW 30th Ave., Hallandale Beach; 954-455-8318; scarlettscabaret.com. Open daily from 8 p.m. to 5 a.m.
KEEP MIAMI NEW TIMES FREE... Since we started Miami New Times, it has been defined as the free, independent voice of Miami, and we'd like to keep it that way. With local media under siege, it's more important than ever for us to rally support behind funding our local journalism. You can help by participating in our "I Support" program, allowing us to keep offering readers access to our incisive coverage of local news, food and culture with no paywalls.
Make a one-time donation today for as little as $1.