The Pide Place Offers a Menu Built on Street-Food Memories 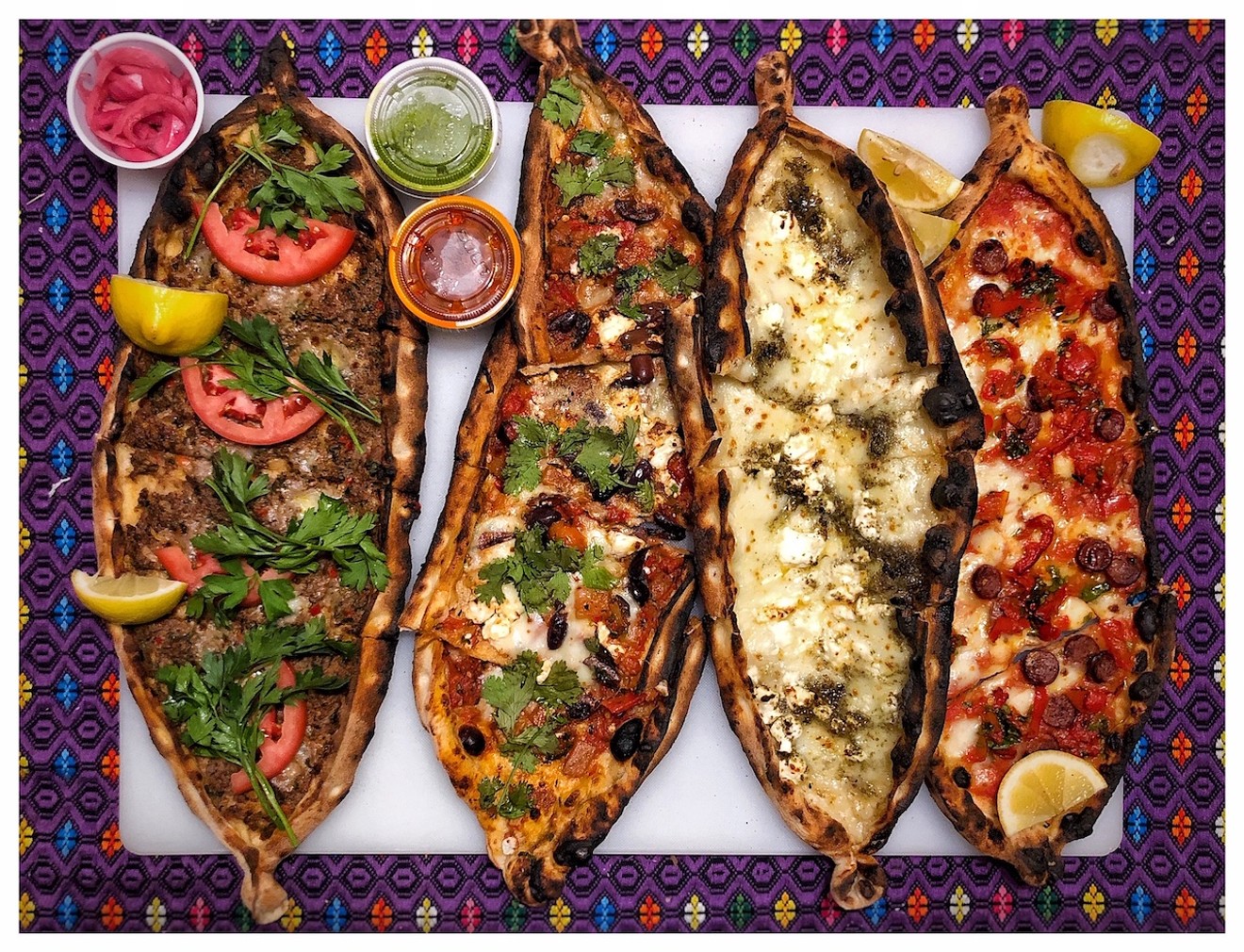 Turkish pides at the Pide Place in Stanzione 87. Photo by David Morales
Back in 2000, Australian-born chef Aaron Brooks lived in a predominantly Turkish neighborhood in Melbourne, where he fell in love with the aromas and flavors of the multicultural cuisine — in particular the canoe-shaped, stuffed flatbread called a pide (pronounced PEE-dae), which can be rolled up and eaten like a wrap.

Fast-forward to 2020, and the coronavirus pandemic has put a halt in Brooks' work as an executive chef at Edge Steak & Bar and the Four Seasons hotel in downtown Miami.

With time on his hands, the chef was baking pies out of his wood-fired pizza oven at home when, inspired by his memories, he decided to try his hand at the Turkish street-food staple.

The current destination for his new creations, the Pide Place, is a dinner pop-up Brooks operates on Fridays and Saturdays at Stanzione 87 in collaboration with owner and pizzaiolo Franco Stanzione.

The two chefs share an oven, but each is in his own element: Stanzione bakes the Neapolitan dough for which he is known, and Brooks fills it with savory ingredients.

And into the oven it goes.

"This community is great when it comes to chef relationships and helping each other out," Brooks tells New Times. "Our pop-up is a collaboration of two friends who wanted to give Miami something special."

Together, Brooks and Stanzione serve up a menu of pides, including Turkish beef pepperoni, covered with the house-made sausage called sujuk (SUE-juck), roasted peppers, cheese, and garlic ($13); and spiced lamb, made with tomato, sumac-pickled onions, lemon, and parsley ($14). His cheese pide is topped with string cheese, feta, za'atar, olive oil, and lemon ($10); and a vegetable version packs spice roasted vegetables, feta, olives, and cilantro ($12). If you can't choose, order the platter, which includes one of each, along with schug ( a Mediterranean hot sauce) and harissa ($49).

As for salads, there's a Lebanese fattoush, made with tomato, cucumber, lettuce, pide chips, sumac vinaigrette, and red onion ($10); and a roasted-carrot option tossed with Greek yogurt, dill, raisins, walnuts, and lemon ($8). Brooks recommends pairing Turkish flatbread, made here with sesame, brown butter, and sea salt ($8) with hummus tahini ($8) and harissa and schug ($1 each).

The pop-up is slated to run into October, though Brooks says it might be extended. Everything is available to-go and preorders can be placed at any time during the week.

The Pide Place at Stanzione 87. 87 SW Eighth St., Miami; 786-360-1852; instagram.com/thepideplace. Preorder via app.upserve.com/s/stanzione-87-miami by selecting the pickup or delivery option for Friday or Saturday between 6 and 9 p.m.
KEEP MIAMI NEW TIMES FREE... Since we started Miami New Times, it has been defined as the free, independent voice of Miami, and we'd like to keep it that way. With local media under siege, it's more important than ever for us to rally support behind funding our local journalism. You can help by participating in our "I Support" program, allowing us to keep offering readers access to our incisive coverage of local news, food and culture with no paywalls.
Make a one-time donation today for as little as $1.
Juliana Accioly
Contact: Juliana Accioly