From Tenant to Squatter: Meet the Hamilton's Last Holdout

Steve Leidner in what remains of the Hamilton's lobby. Photo by Jess Swanson
For nearly four decades, the Hamilton on the Bay apartment complex in Edgewater bustled with more than 200 tenants — children peering into the koi pond in the atrium, women tanning beside the bayfront pool, dog owners shuttling up and down the elevators.

But there was a mass exodus after AIMCO, the company that owns the 28-story building, terminated tenants' leases in mid-May to allow for repairs considered too extensive to be undertaken with anyone living on-site. Tenants were given until July 16 to vacate, and after some pushback received an extension to September 16.

By then, only ten or so renters remained. But the koi fish had been relocated, the pond and pool emptied, the walls gutted, floorboards ripped out, and electrical wires left dangling from the ceiling. The dropbox to deposit rent had been boarded up. The post office stopped delivering mail. Ever since a woman on the tenth floor moved out earlier this month, the 275-unit building has been abandoned — except for one last holdout: Steve Leidner, a vegan environmentalist who has lived in unit #2610 for 18 years.

“Spooky, right?” Leidner says as he walks past units with “Vacant” and “Desocupada” scribbled on their doors in black marker. “This place once had such a unique citizenry — so community- and artistically minded.”
click to enlarge

The words “Vacant” and “Desocupada” have been scribbled on doors in black marker.
Photo by Jess Swanson
In early summer, as the Hamilton neared the deadline for its 40-year recertification, AIMCO senior vice president Lee Hodge told New Times that structural engineers had encountered “irreversible damage” to the structure's sewage and drainage system. Residents wouldn’t be able stay in the building because water and sewer service would have to be disconnected to make the repairs. The units would also be gutted for renovations.

Tenants resisted the evictions as long as they could; a small group even traveled to AIMCO headquarters in Denver to protest. Slowly they relented, moving to homes that couldn’t match the Hamilton’s views of Biscayne Bay, its spacious floorplans, price, and location.

Roughly three weeks ago, a three-day eviction notice was tacked onto his door, informing him that in addition to vacating the premises, he owed $4,637.60 in back rent and penalties. Since the deposit dropbox was boarded up at the end of August, Leidner maintains that he was unable to pay the $1,496 monthly rent for his one-bedroom apartment in September and October. Signs throughout the property state the area "is a designated construction site" and that "anyone who trespasses on the property commits a felony." 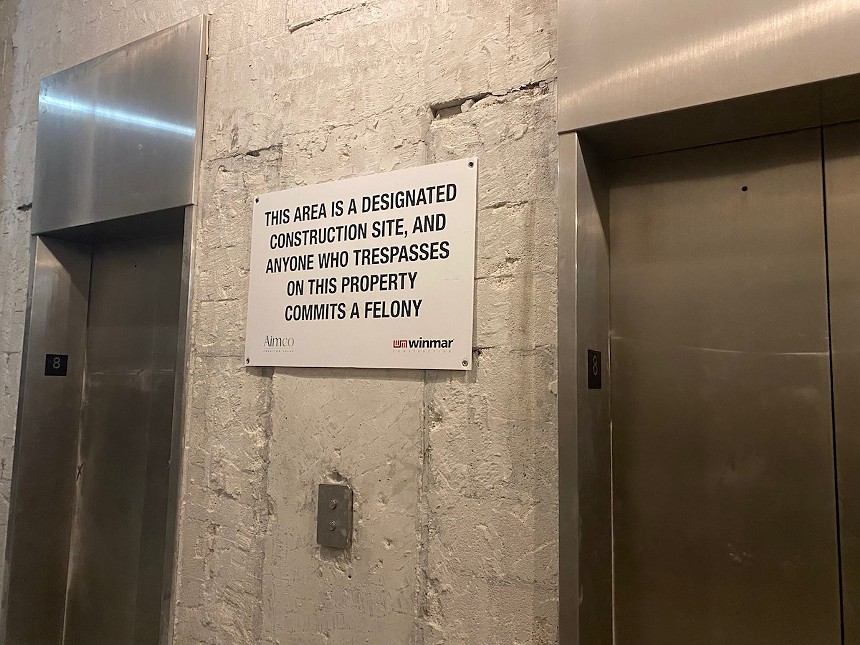 Signs state that the area is a "designated construction site" and that "anyone who trespasses on the property commits a felony."
Photo by Jess Swanson
“I’m not trying to prove a point or retaliate,” he says. “But to pack my belongings and move out by myself is an impossible feat.”

Leidner is disabled, with limited use of his left hand and impaired vision, which makes packing nearly two decades' worth of possessions a challenge.

It hasn’t helped that the conditions in the abandoned building are quickly deteriorating: Jackhammers blast away all day. Last Thursday, the water was temporarily shut off. On Saturday, the elevator stopped working for a few hours, effectively trapping Leidner on the 26th floor. Most recently, on Monday afternoon, the electricity to his apartment shut off.

“This is the cherry on top of two weeks of assaults,” he says in the dark apartment. “I don’t want to say it’s a death trap, but it’s nowhere to live. It’s untenable.” 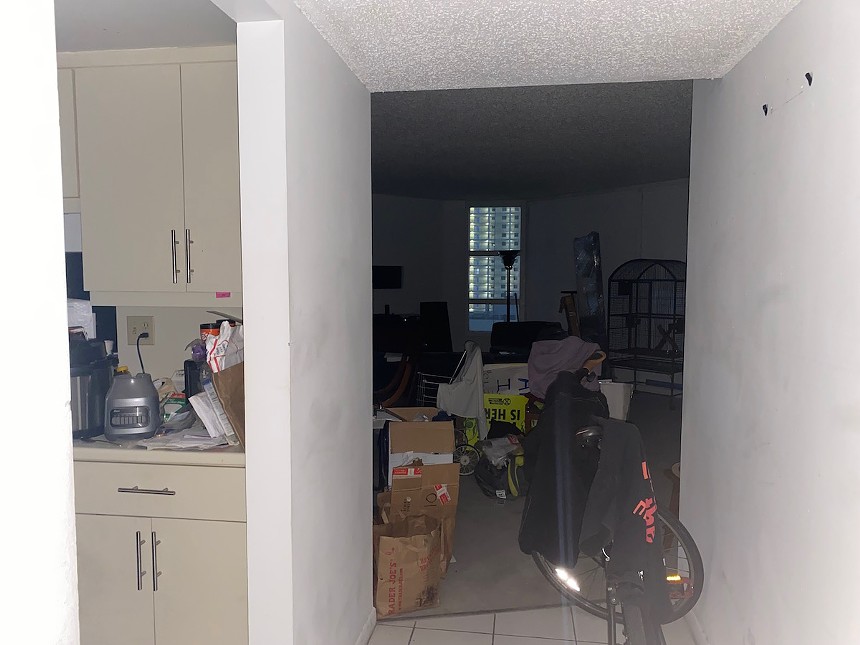 Most recently, on Monday afternoon, the electricity to Leidner's apartment suddenly shut off.
Photo by Jess Swanson
An emergency motion filed last week in Miami-Dade County Court by Leidner’s attorney, David Winker, states that the termination of his lease, which expires in June 2022, is unlawful because his unit "does not require renovation and access to the Apartment Home is not blocked." Winker, who is seeking damages on behalf of his client, has requested a jury trial.

AIMCO's Lee Hodge previously told New Times that the company was working to help residents relocate, and that once renovations were complete the former residents would be given priority to return their units. But the new rental prices would be higher to reflect competitive rates.

Leidner says AIMCO offered him accommodations at nearby sister properties where he could live at the same rate until his lease expired. But the options, he says, were smaller than his apartment.

In a statement to New Times, AIMCO states that it has been working with Leidner to find accommodations to relocate him as they ramped up construction: "We offered to relocate him to nearby apartments for around the same rent or less, in addition to offering him in-kind and financial assistance equal to three months’ rent. In fact, a two-bedroom apartment offered to him was much larger than his current place."

AIMCO confirms Leidner is the only tenant who has not agreed to move out. "We tried as hard as we could to accommodate his requests as we sought to reach a mutually beneficial agreement. Unfortunately, the building is in dire need of a new sewer system, and that emergency repair cannot wait." 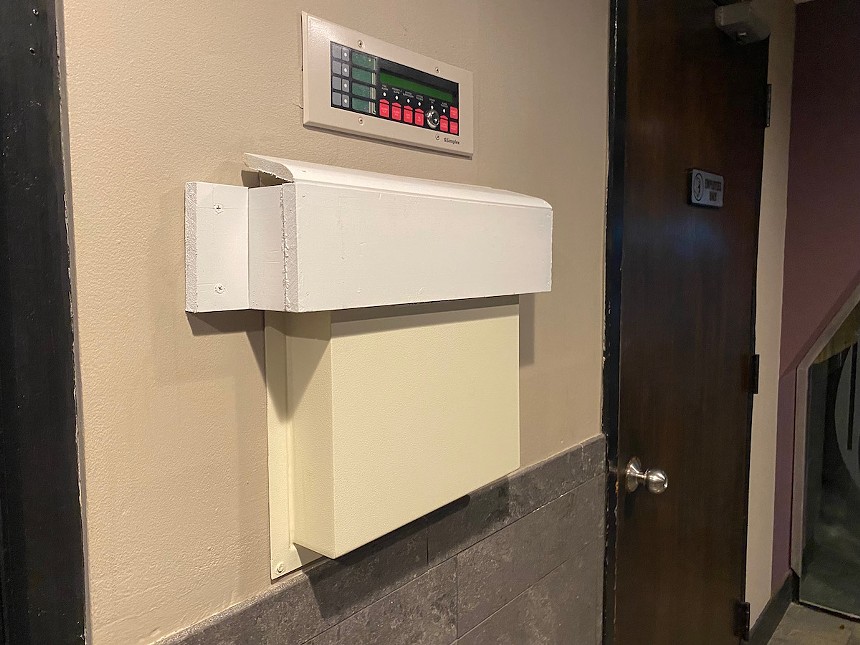 The dropbox to deposit rent had been boarded up.
Photo by Jess Swanson
For now, he'd rather stay in his darkened apartment and try to remain optimistic.

"There's a lot of food in my freezer, so I think it's reasonable that'll keep overnight," he estimated on Monday. "I don't have hot water but I don't need it — I can get away without it. Charging my cell phone is most important, but luckily it has enough charge and a long-lasting battery."

He adds, "At least the weather is cooperating. Imagine if it was summertime without AC?"
KEEP MIAMI NEW TIMES FREE... Since we started Miami New Times, it has been defined as the free, independent voice of Miami, and we'd like to keep it that way. With local media under siege, it's more important than ever for us to rally support behind funding our local journalism. You can help by participating in our "I Support" program, allowing us to keep offering readers access to our incisive coverage of local news, food and culture with no paywalls.
Make a one-time donation today for as little as $1.