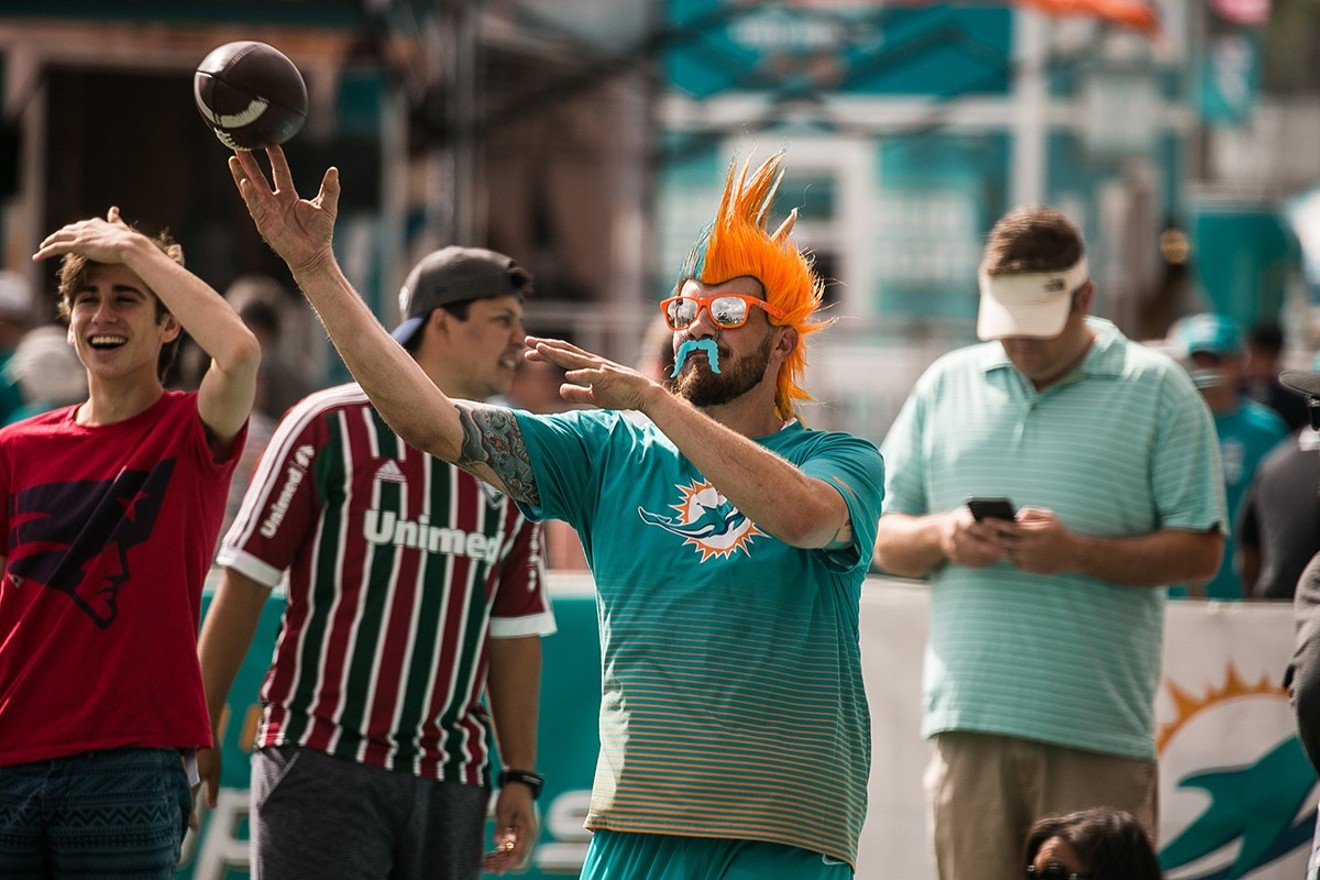 Photo by George Martinez
How did you become a Miami Dolphins fan? That simple question has a seemingly endless number of answers. No matter how each of us got here, here we are, rooting for the Dolphins year in and year out, enduring the inevitable early-season disappointments, the crushing midseason defeats, and the late-season collapses. If you're still with us at this point, you are a real one.

Some die-hards get tons of credit for sticking by historically awful teams: Browns fans, Cubs faithful (before last season), Cleveland Indians true believers. But the honest truth is that today, Dolphins Nation belongs on any list of America's most unreasonably loyal devotees.

There's no Dolphins bandwagon. Being a Fins fan today is very much an until-death-us-part pact. Once you're in, you're in. Sure, the true OG Miami fans still remember the highs of Dan Marino. But far more of us have lived through only the depths of cheering a Cleo Lemon pass to Greg Camarillo that prevented a winless season in 2007. No matter: Dolphins fans have stood by their team.

That fact will be tested yet again this season. Ryan Tannehill is already done for the year. So is rookie linebacker Raekwon McMillan. Star running back Jay Ajayi is already concussed, and so is his backup, Kenyan Drake.

But Fins fans have stuck through these circumstances before. From Don Shula to Bill Parcells and all the way to Adam Gase, Dolphins die-hards have bought into whatever the team was selling even when its plan to build a Super Bowl squad seemingly made no sense at all. Have Dolphins fans complained along the way? You're damn right they have. That's what being a sports fan is all about.

What Miami hasn't done is given up on this team. We're more than willing to walk away from a local team if it deserves desertion — just look at the Marlins — but the Dolphins hold a special place in South Floridians' hearts.

There are myriad reasons why you ended up in this place. Maybe being a Dolphins fan is just a product of your Miami upbringing. Maybe you grew up throwing around footballs on a ranch in Montana, pretending to be Marino because your dad told you he was the best. Maybe you just loved the Dolphins uniforms as a kid. Hell, maybe you just loved dolphins. Who knows?

Whatever the case, the result is the same in 2017: hoping and praying the Dolphins can make their way back to their first Super Bowl since 1984 and win the big game for the first time since 1973.

That doesn't look likely right now. But however you became a Dolphins fan, it doesn't matter. Everyone is in the same boat. Through the ups and downs, you've stuck around. Congratulations. And also, we're sorry.