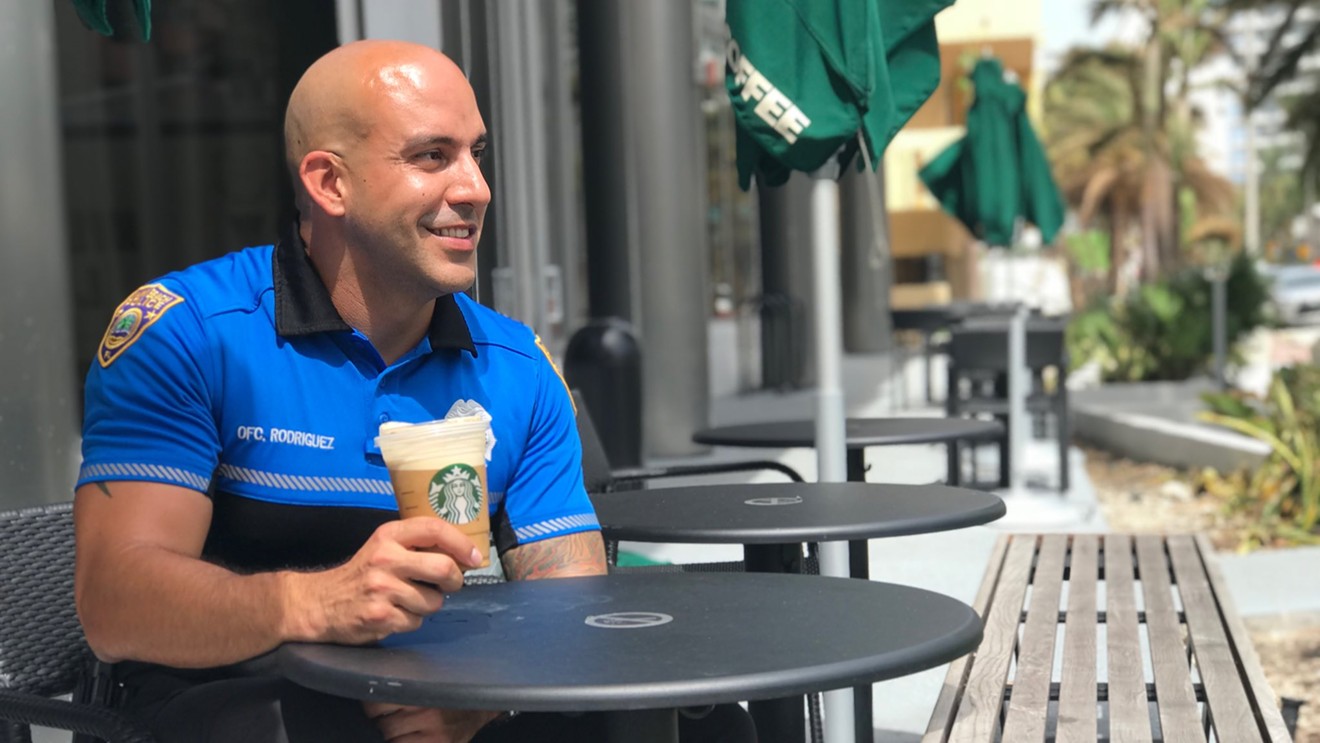 Today it's not so funny, at least for the page's creator. Miami Beach Police say they have arrested the impersonator, Ernesto Orsetti. In a move that is certain to raise First Amendment and electronic-rights concerns, the department is charging Orsetti under a law that makes it illegal to "impersonate a cop."

Florida's "false impersonation" statute does not specifically refer to impersonating anyone online, and it appears the case might set precedent for what conduct is or is not permissible on the internet. As far as Miami Beach Police are concerned, they claim it's clear Orsetti broke the law.

“The behavior here was outrageous," MBPD Chief Dan Oates said in an afternoon news release. "It threatened to damage the reputation of our superb Public Information Officer, as well as the Miami Beach Police Department brand. We simply can’t tolerate such an impersonation, and I am glad Mr. Orsetti will now be held accountable.”

The real Rodriguez was made aware of the fake account, @ernierodmb, January 19 after NBC 6 reporter Jamie Guirola pointed out its existence.

"They say imitation is the sincerest form of flattery," Rodriguez wrote. "Just shows the amount of 'free' time folks have." Rodriguez noted in a second tweet that the account was "generating some great laughs," as opposed to, say, disseminating clearly false and dangerous information. The fake account has since been suspended, but that's apparently not enough for MBPD.


They say imitation is the sincerest form of flattery. Just shows the amount of "free" time folks have. #fakeAccount wow @ernierodmb https://t.co/xitvQGEVIm

Lol, it is generating some great laughs via text! #WhoCreatesFAKEaccounts https://t.co/voaFOYztoO

According to the department's arrest report, the 48-year-old Orsetti was arrested at his Miami Beach home at 1:45 p.m. today after cops executed a search warrant on his computer. The police report says Orsetti is unemployed. (Orsetti lists himself as a "former model" and "journalist" on his personal Twitter account.)

"Defendant falsely created and assumed the identity of the victim (active police officer/police information officer) via Twitter," the report says. "The Twitter account, @ernierodmb, had a marked Miami Beach police vehicle and a photo of the victim in uniform." The report claims Orsetti "communicated with local media, elected officials, and the community" but does not explain what Orsetti did or said or why the officers arrested him instead of simply requesting that Twitter suspend the account.

At least one similar arrest three years ago set privacy activists' anger aflame. In 2014, Peoria, Illinois police raided the home of a man running an account parodying then-Mayor Jim Ardis. Police there authorized a warrant under that state's "impersonating a public official" statute but wound up seizing computers and arresting a roommate for marijuana possession.

At the time, David Greene, a senior staff attorney at the Electronic Frontier Foundation, said the raid was clearly unconstitutional and that "parody is protected by free speech under the First Amendment."

The City of Peoria wound up paying the man $125,000 for the raid after the American Civil Liberties Union sued.


In March 2016, police in Parma, Ohio, arrested a man for creating a Facebook account called "The City of Parma Police Department," which was so similar to the real Parma PD Facebook page that the department had to warn residents about it. But whether the act was "criminal" is another story: A jury acquitted the man four months later.

This is a breaking story. This post will be updated.