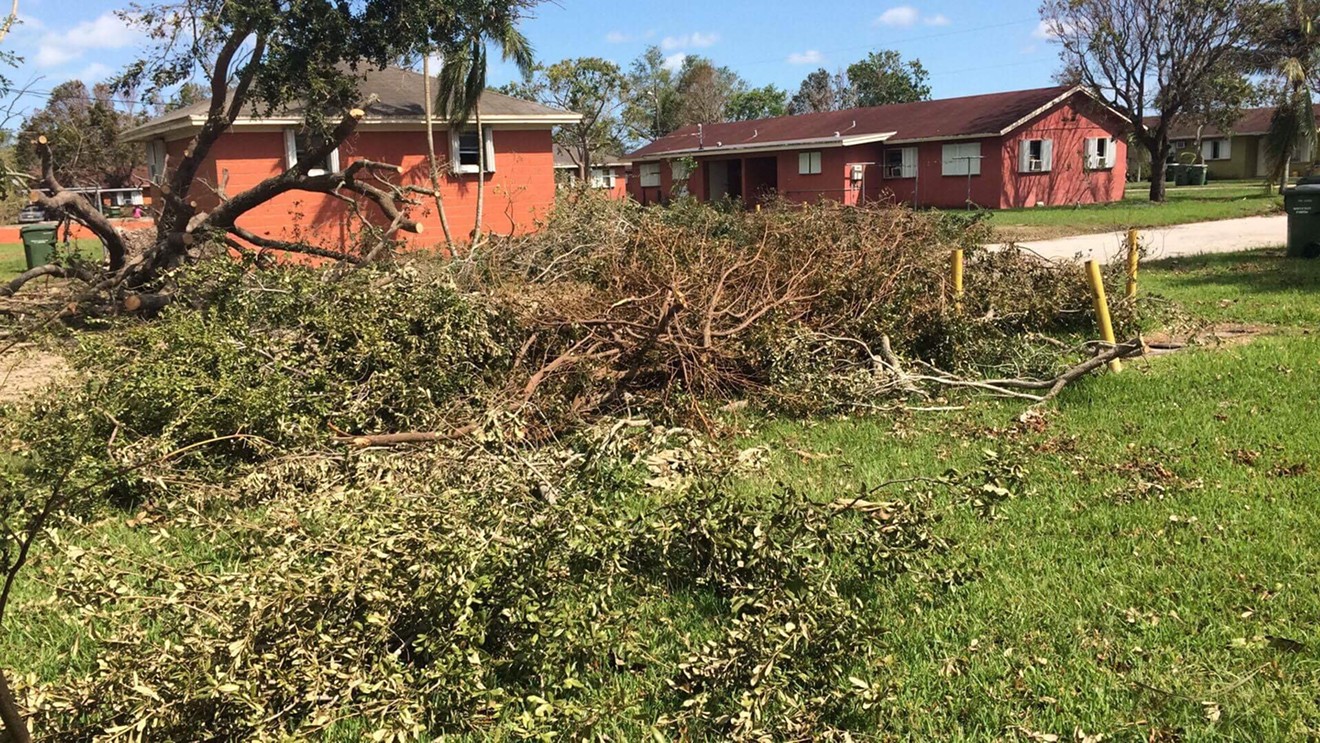 The South Dade Center is a subsidized housing project for the huge farmworker community in Homestead, the rural town south of Miami that has been repeatedly blasted by hurricanes since Andrew hit in 1992. Most of the area's residents are of Mexican or Central American descent and make little money working in the sun-baked fields and plant nurseries that feed the rest of Florida.

Now, many residents of the South Dade Center say Homestead has abandoned them since Hurricane Irma hit: The center flooded and lost power over the weekend, and residents and activists who spoke to New Times say they haven't seen a single power-company truck even scope out the neighborhood all week. Homestead operates its own electric grid independent of Florida Power & Light, and residents and activists describe the center as a sun-baked sauna where it's cooler to sleep outside and get bitten by mosquitoes than it is to stay indoors.

Just after noon yesterday, a group of activists with the Florida Immigrant Coalition and other groups began blasting Homestead officials with calls and social media posts, demanding the city help the residents of what it calls the "South Dade Labor Camps." (Perhaps change that name, guys.)

The push seems to have worked: By 3:30 p.m., the site's administrator told New Times that the neighborhood was slated to get power back by Sunday night. Hours later, around 6 p.m., Homestead updated its projections and said the area's electricity would likely be fully restored by tonight.

Mere hours after the tweet-storm began, Salma Jaramillo, a relative of someone who lives in the center, posted online that trucks were finally beginning to arrive after residents said they hadn't seen any sign of them for days.

Courtesy of Salma Jaramillo
Jaramillo's grandfather lives on the property, but she said he had left town for vacation "long before" Irma hit. Yesterday she stopped by the center to make sure his apartment is OK and said she saw fallen trees still wrapped around power lines, as well as children, not work crews, removing debris from the street.

"This community seems like it’s been forgotten," Jaramillo told New Times. "There's still a lot of trash here. It's really, really hot. The houses are made from cement blocks, so they heat up really fast."

Courtesy of Salma Jaramillo
She said the residents she's spoken with had no idea when HPS Energy, Homestead's power company, planned to begin fixing things. She added that the city sent garbage trucks to the center only yesterday, five days after the storm hit.

"These people, you can see them just sweating," she said. "They're out here in shorts. They have no choice but to stay outside because it's really hot inside. I tried contacting the main office, but I was not given a straight answer."

HPS Energy did not respond to a call from New Times yesterday. But Brandy Ramirez, the Homestead Housing Authority manager for the site, said via phone around 3 p.m. that HPS had promised residents to have the entire city's power grid back up and running by Sunday night, the same timeframe FPL gave the rest of South Florida.

"They posted that on their website, assuring all houses within city limits would have power back by then," Ramirez said yesterday. "They assured us this does include the South Dade Center and assured us the center is on their big board of places to get done."

In the meantime, Ramirez said, city officials plan to hold events in the coming days to assure the center's residents they're not invisible.

"I've seen some city officials go out and assure those families they’re not forgotten and that there's power coming their way soon," Ramirez said. "Thank God we're getting a lot of support from the city, Commissioner Daniella Levine Cava’s office, and we're going to bring food for families, ice, everything."

Courtesy of Salma Jaramillo
The Homestead Housing Authority operates four housing complexes subsidized for poor farmworkers. One of the four sits on FPL's power grid, while the rest get electricity from HPS Energy.

Jonathan Fried, a workers'-rights activist with the immigrant-rights group WeCount, said via phone that residents don't feel as assured as the Housing Authority claims.

"The place is in a floodplain, and flooded, but the bigger problem is that there's no electricity," he said. "Homestead Electric has done a pretty good job in the rest of Homestead — you can see the trucks everywhere. But people are seeing no work being done here."

He said he spoke to one pregnant woman who said she chose to sleep outside after it became too hot to stay in their home because the windows didn't open enough to ventilate the place. She said that two nights ago, she received so many mosquito bites that she was unsure where to sleep last night.

He added that the city held a meeting with Homestead Vice Mayor Patricia Fairclough at 4:30 p.m. to better inform residents about the status of the city's relief efforts.

Ramirez, at the housing authority, said the city is doing all it can to bring the power grid back as fast as possible, but residents said they felt confused as of 3:30 p.m. yesterday.

But by 6 p.m., after sustained outreach from local activists, the City of Homestead confirmed help was finally coming.