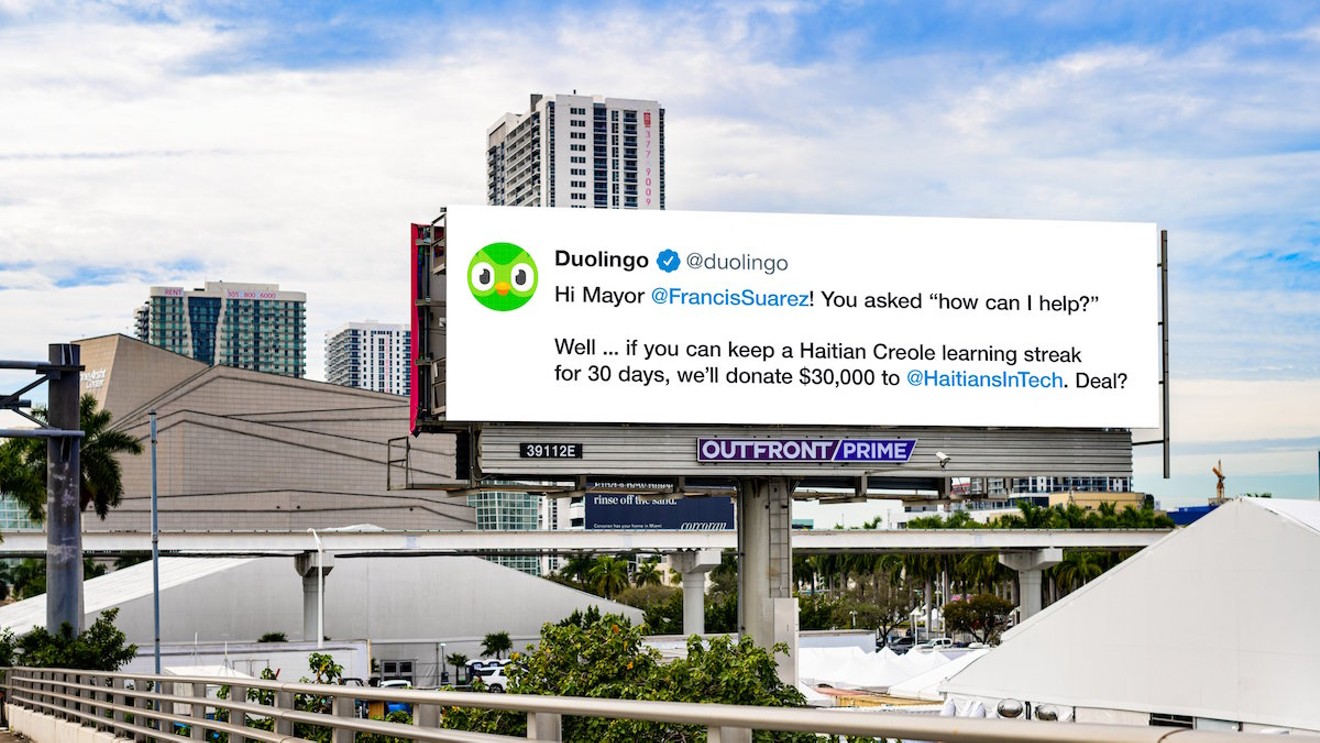 The popular language-learning app challenged Suarez — who reminds folks at every possible turn that his unofficial motto is "How can I help?" — to a bet.

"Hi Mayor @FrancisSuarez! You asked 'how can I help?,'" the app's Twitter account tweeted Tuesday morning. "Well... if you can keep a Haitian Creole learning streak for 30 days, we'll donate $30,000 to @HaitiansInTech. Deal?"

Twenty-five minutes later, Suarez replied "DEAL!!!" adding that the "Haitian community is a very important part of our City and we will continue supporting all Miamians by bringing tech education to everyone in the Magic City!"

The Haitian community is a very important part of our City and we will continue supporting all Miamians by bringing tech education to everyone in the Magic City! @HaitiansInTech Get Ready🚀 https://t.co/AG8KbW3Jzb

In Florida, Haitian Creole is the third most common language, spoken by more than 300,000 people. The center of Miami's Haitian community, of course, is Little Haiti, roughly five miles north of downtown, where English and Creole are spoken in roughly equal measure.

The app's friendly challenge to Suarez is part of a broader rollout of Duolingo's Haitian Creole course, which also launched Tuesday.

"Miami is proud to have one of the largest Haitian populations in the world," Suarez said in a statement to New Times. "We applaud Duolingo for making Haitian Creole more accessible to everyone; it will serve as a vehicle to Haiti’s rich history and cultural traditions."

This isn't the first time Suarez's camp has endeavored to strengthen ties between Miami and its Haitian community.

In October, the mayor's office created a collection of 12 non-fungible tokens titled How Can I Help? that he put up for auction on OpenSea to benefit the Little Haiti Coding Boot Camp. One NFT featured the common Creole greeting "sak pase," and another the Creole translation of Little Haiti, "ti ayiti." But the effort only generated one kone bid, and it's unclear how much money was actually raised.

According to its website, Haitians in Tech is a grassroots startup formed in 2020 that helps South Florida-based Haitians compete in the local tech sector through one-on-one mentoring and professional development. Its founder, Whitney Lubin, tells New Times that Haitians in Tech functions as a nonprofit though it hasn't yet acquired 501(c)(3) status.

"I really hope it makes it that so that [Suarez] really engages with the Haitian community," says Lubin, who is Haitian-American. "What's needed is to have a really strong coalition of leaders who are engaging with them to get the right programs and accountability in place."

Duolingo's app is available to download across all iOS and Android devices. It sends daily, and extremely persistent, push notifications to remind users to complete their daily lesson.
KEEP MIAMI NEW TIMES FREE... Since we started Miami New Times, it has been defined as the free, independent voice of Miami, and we'd like to keep it that way. With local media under siege, it's more important than ever for us to rally support behind funding our local journalism. You can help by participating in our "I Support" program, allowing us to keep offering readers access to our incisive coverage of local news, food and culture with no paywalls.
Make a one-time donation today for as little as $1.